Background: Chronic kidney disease is a global health concern, its detection and diagnosis in earlier stages is also a great challenge that can alleviate this burden. Kidney biopsy is important to establish histopathological patterns. But, it's invasive.

Objectives: Is to evaluate the correlation of renal resistive index (RI) measured by Doppler ultrasound with the progression of chronic kidney disease and to evaluate its significance as non-invasive marker of renal histological damage. Methods: This is a prospective cross sectional study included a total of 57 children; 38 patients with different stages of chronic kidney disease (Group I) and 19 healthy children served as controls (Group II). Full history, examinations and some laboratory investigations were done. All participants underwent renal Doppler ultrasonography and a kidney biopsy was taken from CKD patients.

Chronic Kidney Disease (CKD) is a significant global health concern which is associated with an increased risk of multiple organ dysfunctions [1], it is a certain risk factor for end-stage renal disease (ESRD), especially in pediatric patients. Globally, chronic kidney disease takes the 18th position of the causes of death over the last 20 years [2]. The proper management of earlier stages of CKD is effective to slow the progression of renal failure.

Clinically, data obtained from kidney biopsy is considered as a gold standard that establishes the histopathological patterns concerning renal injury. But, biopsy is invasive and may be correlated with various disorders such as gross hematuria and some massive complications which may result in renal failure [3]. On the other hand, Doppler ultrasonography is a noninvasive maneuver, intensively used for the evaluation of chronic kidney diseases and a lot of studies indicated the potential of Doppler ultrasonography as an effective tool for the assessment of renal dysfunction. Some morphological changes of the injured kidney can be detected by ultrasonography such as parenchymal echogenicity, corticomedullary differentiation and changes in its size, but these is not specific for the assessment of renal failure, [4] also, these morphological changes “detected by ultrasonography” appear much later than the certain indicators of CKD such as increasing creatinine levels [5].

Resistive index (RI) is a parameter indicates the intrarenal arterial resistance. Resistive index is increased in various kidney diseases, [6] and some studies reported that RI is associated with renal function and patient prognosis [7].

The objective of this study is to evaluate the correlation of renal resistive index (RI) measured by Doppler ultrasound with CKD progression and to evaluate the significance of RI as noninvasive marker of renal histological damage.

This study was conducted in the Pediatric Nephrology unite at El-Minia Pediatric University Hospital, El-Minia, Egypt, during the period from May 2016 to June 2017. A total of 57 children (26 boys and 31 girls) aged 4:14 years were included in this study. These children were classified to two groups as follows:

We exclude children with hyper coagulopathy disease and /or receiving anticoagulant drugs, anaemic and hypertensive ones from this study. For CKD group, we excluded all patients with hepatitis B, C (portal hypertension). Patients of chronic kidney disease were diagnosed according to guidelines of Kidney Disease Outcomes Quality Initiative (K/DOQI) of the National Kidney Foundation [8], the classifications were made as follows: Stage 1, (eGFR mL/min/1.73 m2)>90; Stage 2, eGFR=60:89; Stage 3, eGFR=30:59; Stage 4, eGFR=15:29; and stage 5, eGFR<15 or dialysis.

From all participants, full history was taken including demographic data and for CKD group, the collected data were, symptoms at onset of the disease, hematuria or any kidney problem, history of hypertension, progression and duration of symptoms, history of medication as regard (type, dose and frequency) and duration of hemodialysis. Complete clinical examination was taken including anthropometric measures (weight and height) and blood pressure was determined. Some laboratory investigations were determined such as 24th protein in urine, serum urea and creatinine concentrations and estimated glomerular filtration rate (eGFR) was calculated by Schwartz equation using body height and creatinine value as follow:

Bilateral Color Doppler Imaging was used to asses renal blood flow velocity at Radiology Department, El-Minia University Hospital. It was performed by NemioXG devic (Toshiba Medical Systems, Tochigi, Japan). All participants were scanned in lying down on the left lateral position then on the right lateral position or a supine or decubitus position to achieve accurate scan as much as possible, this Ultrasound scan was performed for CKD group before taking the renal biopsy with 24 hrs. Doppler signals were in general obtained from renal artery lying between the superior mesenteric artery and the corresponding renal vein, arcuate arteries at the corticomedullary junction and/or interlobar arteries along the border of medullary pyramids. The resistive index (RI) for each vessel was calculated as an average value obtained from three to five waveforms. After the measurements of homodynamic parameters such as PSV and EDV, the resistive index (RI) was calculated by this equation: RI = (PSV-EDV)/ PSV. Also, the renal length was recorded.

Renal tru-cut biopsies were taken from all CKD patients under ultrasonic guide and scored for histological damage in terms of: arteriolosclerosis (AS), glomerulosclerosis (GS) and tubulointerstitial (TI) damage scores according to scoring systems of Asaba et al. [10] They were evaluated by H&E, Masson Trichrome stain and periodic acidmethenamine silverstain (PAS). For GS score, It was done as follow: 0, no GS; 1, matrix expansion or GS<25%; 2, GS=2650%; 3, GS=5175%; and 4, GS >75%. Regarding AS score, it was evaluated as: 0, normal; 1, medial thickening; 2, segmental hyalinosis; 3, global hyalinosis; and 4, luminal occlusion with thrombus. As regard TI score, it was assessed as: 0, normal; 1, mild fibrosis around the vasculature; 2, mild fibrosis around the tubules; 3, moderate fibrosis with tubular casts; and 4, severe fibrosis.

Results of Doppler ultrasound are presented in Table 3, (Figures 1-3). CKD patients group had significantly (p<0.01) higher resistive index (0.81 ± 0.22) compared to control group (0.53 ± 0.04). However, in contrary, CKD group had significantly (p<0.01) smaller renal length than control. Significant positive correlation was found between resistive index and systolic blood pressure, urea and createnine concentrations, stage of CKD, histological indices (GS, AR and TI scores). However, significant (p<0.01) negative association was found between resistive index and both eGFR (r=-0.49), and renal length (r=-0.40). While, no correlation was noticed between RI and age, height, weight, diastolic BP and 24th protein in urine. Regarding the correlation between renal length and other variables, Urea and createnine concentrations, stages of CKD and all histological indices (GS, AR and TI scores) were negatively associated (p<0.01) with renal length, however, body weight and height and eGFR were positively correlated (p<0.01) with renal length and no correlation was observed between both blood pressure and 24th protein in urine and renal length. 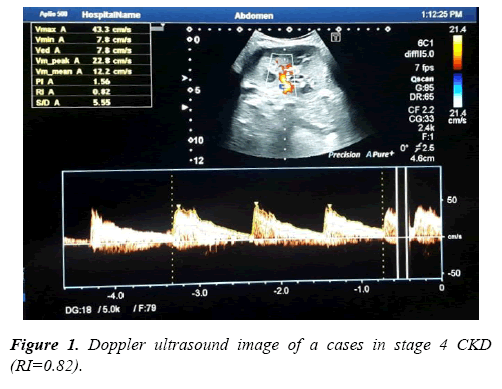 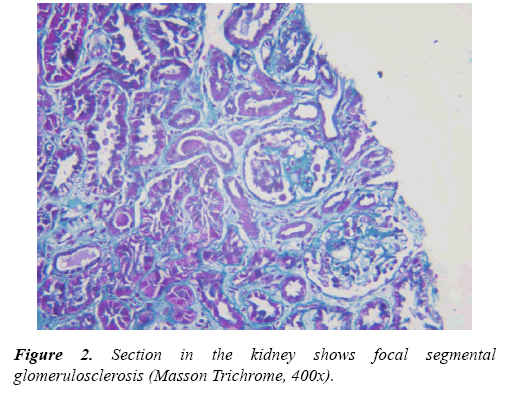 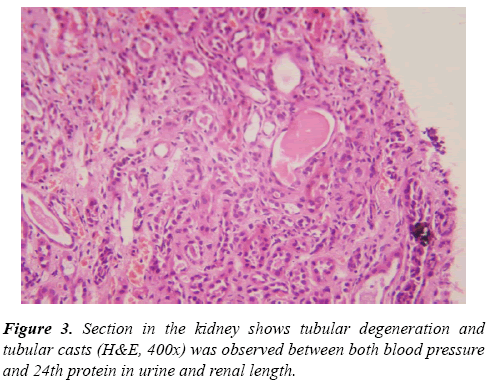 Figure 3. Section in the kidney shows tubular degeneration and tubular casts (H&E, 400x) was observed between both blood pressure and 24th protein in urine and renal length.

Table 3. Correlation of resistive index and renal length with other variables in CKD patients group.

From all Doppler ultrasonographic indices, renal resistive index "which is considered a reflection of renal parenchymal resistance" was the best marker of CKD stages. In our study, we found that RI was significantly higher in CKD patients compared to normal control ones. As matched with our findings, Ikee et al. [11] reported that the optimum range of resistive index is 0.5:0.7. Our findings were confirmed by many authors [11-16] who reported that RI was increased in CKD patients. Also, the obtained significant negative correlation between eGFR and RI in our study confirm and to some extent explain this result. On the other hand, others reported that increased RI may not always be a result of renal dysfunction, it may affected by many cardiovascular factors such as vascular compliance, pulsatility and heart rate [17].

Our results indicated that RI was increased with the progression of CKD stage, these findings are in consistent with [10,16,18] These results may be explained by that progressive chronic renal disease is believed to reflect a nonspecific renal scarring process involving all renal components, this process results in a reduction in the number and area of post glomerular capillaries. Renal scarring ultimately leads to a reduction in the intrarenal vessel area, which in turn may be responsible for an increased intrarenal vascular resistance. The same findings were found in a study by Bigé et al. [12]. These findings support the hypothesis of increase in RI with the progression kidney disease stage in children.

Also, our findings showed significant correlations between RI and histological damage scores (GS, AR and TI scores). These results are in agreement with Ikee et al. [11] who found that AS is significantly correlated with elevated RI. Also, Hanamura et al. [18] found that RI was strongly associated with TI lesions. Advanced kidney injury is really related with interstitial fibrosis with tubular atrophy and loss of capillaries, it has been reported that TI damage is a histological parameter that strongly correlates with renal function [18] even so, it is not known why TI damage can cause an increase in RI. But, it is thought that alterations in post-glomerular vessels by interstitial fibrosis can cause increased resistance to renal cortical blood flow, with a subsequent reduction of glomerular perfusion, independent of the severity of glomerulosclerosis [19]. Additionally, Liu et al. [20] reported that renal fibrosis "particularly tubulointerstitial fibrosis" is the common outcome of almost all cases of progressive CKD and renal fibrosis is also a reliable predictor of prognosis and a major determinant of renal insufficiency. In agreement with our findings, a study has shown that RI is correlated with histological changes and poor renal outcome in chronic kidney diseases patients [21].

One of our study findings is that, renal length was significantly smaller in CKD patients than controls and it decreased with the progression of CKD stage. Similar results were obtained by Makusidi et al. [22] who found that there is a positive strong correlation between renal length and degree of kidney function. In patients with CKD, kidney size changes over time, with atrophy related directly to the decline in renal function [23]. Also, it was documented that renal length is significantly correlated with glomerular filtration rate [24]. Furthermore, Emamian et al. [25] reported a positive correlation was found between renal length and creatinine clearance. In contrary, Chen et al. [26] found that the renal length showed weak correlation with renal function. They added that kidney length is often affected by the body size of a patient and multiple conditions, including diabetic nephropathy and amyloid nephropathy which may also cause kidney enlargement.

In summary, on the basis of our observations, RI increases with progression of CKD and this is supported by the significant inverse correlation between RI and glomerular filtration rate. Also, we can suggest that RI was considered as a marker of renal function and histological damage in CKD patients and it could be a non-invasive indicator for monitoring the progression of renal disease. But we could not confirm completely that RI is able to replace renal biopsy. One of our study limitations is the small sample size. So, further studies with larger sample size should be conducted to evaluate the accuracy of Doppler ultrasound parameters for the evaluation of kidney function and histological damage.

The authors thank all participants who were included in this project and their relatives, beside the clinical staff of Pediatric Nephrology unit at El-Minia Pediatric University Hospital, El- Minia, Egypt who were involved for the completion of the study.