UTILIZATION OF CHITIN DERIVED FROM SHELL WASTES FOR THE PRODUCTION OF L-PHENYL ACETYL CARBINOL BY THE YEAST, SACCHAROMYCES CEVREVISAE ATCC-MYA 143

The present investigations are designed to understand the applicability of chitin derived from the waste shells of a marine shrimp, Penaeus monodon as a supplement in the medium formulation in mobilizing cell biomass for biotransformation of benzaldehyde to L-Phenyl Acetyl Carbinol (L-PAC). The yeast strain Saccharomyces cerevesiae ATCC-MYA 143 (CDRL, Lucknow) was employed for the production of L-PAC using shake flask fermentation. The results depict that in the presence of Molasses, Urea and Chitin (MUC), the yeast cells attained a concentration of 145 × 106/ml or 14.5 g.l–1 at pH 5.2. The addition of chitin to the media composition (Molasses and urea) in the presence of benzaldehyde clearly indicated that MUC appears to have a definite influence on the yield of L-PAC production.

Transformation of organic compounds using biocatalystsenzymes, cell organelles or whole cells are important processes in organic synthesis and have been widely used in the production of steroids, antibiotics, vitamins and other high value products. L-ephedrine a key intermediate for many drugs is one such product, widely used in pharmaceutical preparations. L-PAC can be produced by chemical synthesis from cyanohydrins (Brusse et al., 1988; Jackson et al., 1990) but it is the most preferred route of biotransformation for industrial use (Mariana et al., 2014) and it is currently produced by using different species of yeasts with benzaldehyde as the aromatic substrate.

L-Phenyl Acetyl Carbinol (L-PAC) is the starting material for the chemical synthesis of L-Ephidrine hydrochloride and D-pseudoephedrine two pharmaceutical compounds used as a decongestant, anti-asthamatics and reports have indicated also its potential use in obesity control (Shin and Rogers, 1995). The biochemical production of L-PAC in the early 1920s was demonstrated for the first time after the addition of benzaldehyde to a culture of actively fermenting yeast. Meyer and Sahm (1988) studied the production of L-PAC through purified Pyruvate decaroxylase (PDC) from both Zymomonas mobilis and Saccharomyces carlbergensis. The complete conversion of added benzaldehyde is not achieved in whole cell systems because of the formation of by products, namely benzyl alcohol and benzoic acid (Smith & Hendlin, 1953). Ravi Kumar et al., (2010) studied L-PAC production from benzaldehyde by using various novel strains of yeasts under various growth and biotransformation modalities.

The potential use of chitosan as a novel excipient that could find extensive applications in pharmaceutical products has received attention and it is highlighted in several reports and in numerous articles relating to the field (Paul and Sharma, 2000; Singla and Chawla, 2001). Although the selection and role of novel strains of yeasts is an important aspect in L-PAC production, the utilization of shell wastes, a rich source of chitin has generated lot of interest in biotechnological applications and therefore the present investigation is an attempt to use chitin in the medium composition for the first time in mobilizing cell biomass of the yeast, Saccharomyces cerevisiae ATCC-MYA 143 for biotransformation of benzaldehyde to L-Phenyl Acetyl Carbinol (L-PAC).

Yeast extract, Malt extract, D-Glucose, Agar agar Corn steep liquor (CSL) as well as Urea were purchased from Hi Media Laboratories Pvt. Ltd., Mumbai. India. All media was prepared from technical grade components. The substrate (Benzaldehyde) was purchased from Indian Organics Limited. Strain of Saccahromyces cereviseae (ATCC-MYA 143) was obtained from Central Drug and Research Laboratory (CDRL) Lucknow and maintained in Yeast / Malt/ glucose/ agar slants (pH 4.5) at 4°C. Culture media for the growth of S. Cereviseae ATCC-MYA 143 was obtained from Hi-Media. The media was autoclaved at 121°C for 15 min. The lyophilized ampoules of the culture were then transferred aseptically into duplicate tubes containing suitable media for activation. YMGA was used for the maintenance and propagation of the L-PAC culture.

Molasses is the main raw material for production of L-PAC. The quality of molasses depends mainly upon the process of sugar and soil fertility. It was procured from Venkateswara Co-operative Sugar and Chemicals, Chittoor, A.P. and urea for nitrogen sources was procured from Nagarjuna Fertilizers and Chemicals Ltd., Kakinada, A.P. Molasses and Water of equal proportions (1 l) was taken in a volumetric flask. The contents were stirred for 15 minutes. The initial pH value was 4.38, which was then adjusted to 4.0 with 8 ml of 20% Sulphuric acid. The contents were heated up to 80°C for 20 minutes and maintained for one hour. The medium was allowed to settle for 40 minutes at 80°C temperature then cooled up to 30°C and the supernatant was collected and used for experiments.

The media composition with slight modification as proposed by Noronha et al. (1993) was used in the present investigations. The media composed of Molasses + Urea (MU), Molasses + Urea + Corn Steep Liquor (MUCS), Molasses (Pretreated Molasses) + Urea (MUP) and Molasses + Urea + Chitin (MUC) was selected for growth on the basis of cell count × 106/ml or weight calculated. The cell concentration of suspension was adjusted to 0.6 Optical Density (O.D) at 550 nm; 250 ml media (pH. 4.5- 6.0) in 500 ml Erlenmeyer flasks was inoculated with S. cereviseae suspension (8% v/v). The flasks were incubated at 28 ± 2°C and 220-240 RPM. Cell growth in all the media was determined by estimating the cell dry weight and cell counts after every 4 and 8 hours intervals respectively. The difference in the initial and the final weights gave the dry weights. Based on dry weight values, the growth curves (Dry Wt. (g1–1) vs. Time (h) was plotted.

Biotransformation: 500 ml Erlenmeyer flasks were used for obtaining S. cereviseae growth in 250 ml media for studying optimum conditions necessary for biotransformation. Cells were harvested for different time intervals to monitor different phases of growth. The optimum values of pH and temperature were found to be in the range of pH 4.5-6.0 and temperature of 26-33°C. The time required for maximum product formation was determined by analyzing the product after every 60 min. for 13 h. The flask contents were placed in orbital shaker for completion of biotransformation.

Estimation of L-Phenylacetylcarbinol (L-PAC): Beckman 110 model HPLC with 160-absorbance detector [wave length 25 mm) and BD40 recorder was used for the quantitative estimation of L-PAC. C-18 column at 300 A (3.9 × 30 cm, 15 μm spherical) was employed. The other conditions included the use of acetonitrile and water (30:70 v/v) as the mobile phase at a flow rate of 1.5 ml/min and the retention times of benzoic acid, Benzyl alcohol; L-PAC, and Benzaldehyde were monitored (2.3,3.1,3.6 and 4.9 min respectively). Glucose concentration was determined by YSI glucose analyzer (Yellow Springs Instruments Co., Model 27) and total sugar and reducing sugar was determined by using cane analysis method (IS 1162- 1958). The cell count was determined microscopically on a Neubaur chamber (X × 106/ml). 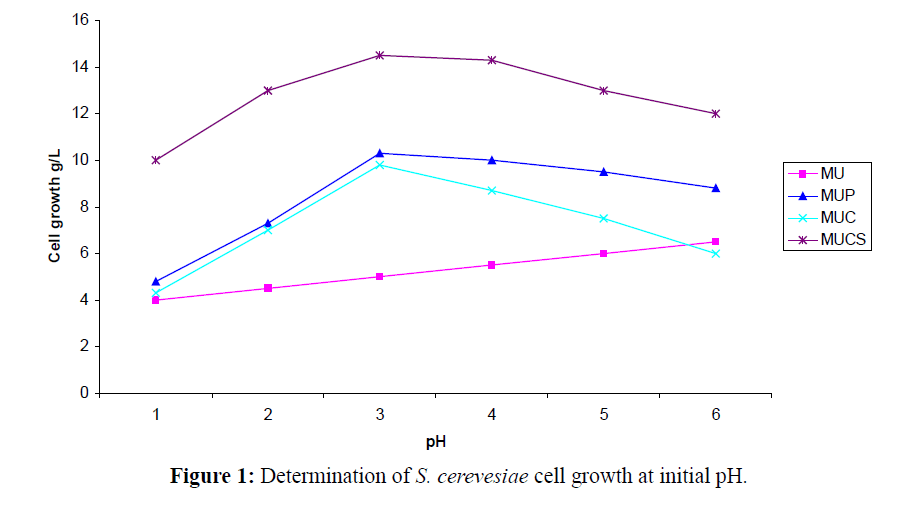 Table 1: Effect of ethanol during biotransformation of Benzaldehyde to L-PAC by S. cerevesiae.

At a fixed concentration of benzaldehyde as substrate and pH 5.2, a gradual increase in the L-PAC production was observed (Figure 2). The studies also revealed that at 26°C, the L-PAC production increased to 7.0 g/l (initial value was 4.0 g/l). Further increase in the concentration of benzaldehyde and incubation period decreased the L-PAC formation. Elliaiah and Krishana (1988) observed that the media comprising of 10-15% of molasses and 02- 0.25% of urea achieved yields of upto 5.0 g.l-1 with the S. cerevisiae strain. The maximum yield of L-PAC (3.11g/L) was achieved at pH of 6.0 with a strain of Candida utilis (Khan et al., 2012) and they concluded that any decrease or increase of pH from 6.0 may cause inactivation of the PDC, inhibition of metabolic functions and decrease the solubility of the substrates in the medium resulting in lower production of L-PAC. Leuenberger (1984) reported that product yield could be effectively increased by solublizing/emulsifying immiscible substrates. Further analysis with Gas chromatography (GC) revealed the presence of substrate (benzaldehyde) and a single major product L-PAC along with minor product such as benzoic acid and benzyl alcohol (Table 2). 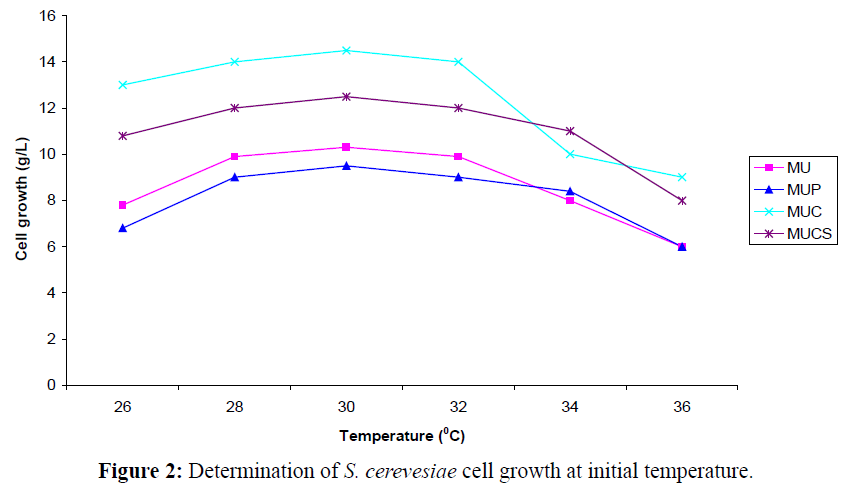 Table 2: Effect of Concentration of Benzaldehyde on Product Profile.

We have also evaluated the effect of chitin addition in the growth media on cell viability and the productivity of L-PAC and it is observed that the addition of chitin to the growth media (MUC) has shown a marked improvement in cell viability in achieving rapid utilization of benzaldehyde for bioconversion to L-PAC (Figure 3). Studies on a strain of Candida utilis have indicated that acetaldehyde or benzoic acid accumulation might influence L-PAC production although only very low levels were detected during biotransformation with free cells of Candida utilis. 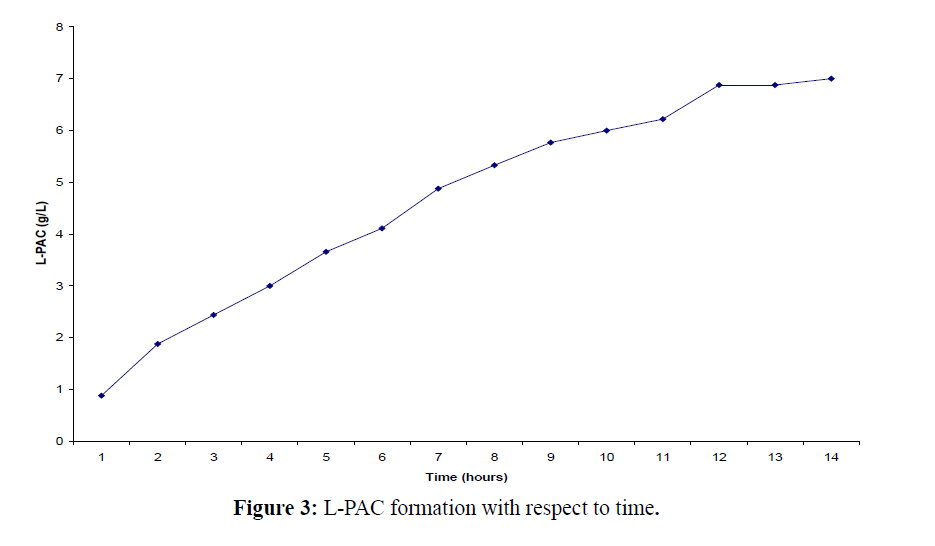 In a similar context, we have also investigated whether increasing concentration of ethanol using yeast cells cultivated in MU medium and MUC medium has any effect on product yield, and the findings of our study indicated that at increased concentration of solvent (ethanol), the cell counts decreased from 109 cells/ml to 104-105 cells/ml (Figure 4). The addition of 0.3 g/100 ml ethanol was found to be suitable for increasing the product yield to 7.11 g/l of L-PAC. The whole cell stability in presence of organic solvent mainly depends on its log P value and is affected in presence of solvents having log P value up to 2 to 4 beyond which the solvent toxicity decreases. 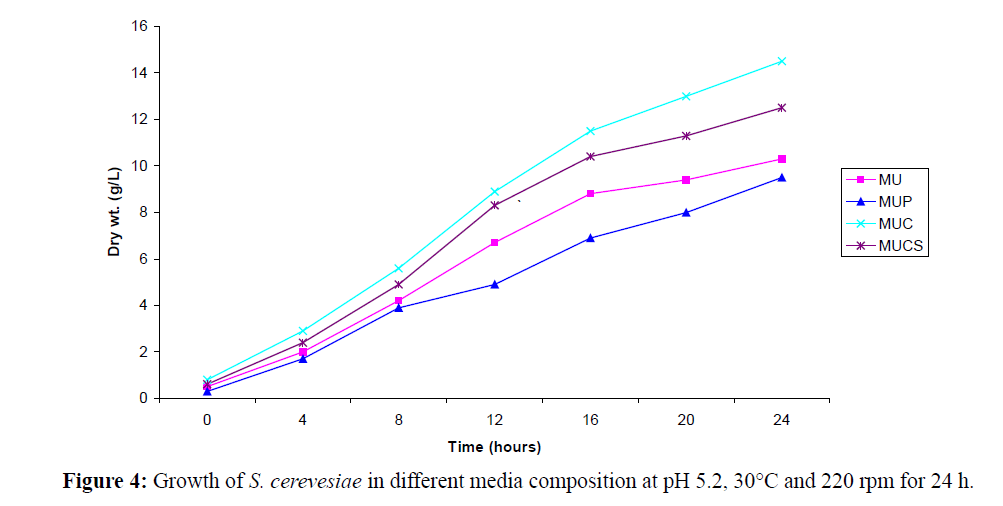 The solubility properties of ethanol and water to understand the activity of yeast cells as a measure of bioconversion was also attempted and it was observed that an increase in growth rate by 30% to 40% and 83.7% of bioconversion was achieved by the addition of 2.0 to 3.0 M of ethanol. The optimum concentration of ethanol to be employed along with the substrate at non-toxic levels was observed at 14 h. However, it was necessary to maintain the age of cell culture up to 37 h to achieve a maximum cell concentration for optimum product formation. These studies illustrated that chitin supplemented in the medium possibly could accelerate the growth rates under controlled conditions. Based on these findings, it can be concluded that chitin addition in the growth media composition and optimization may augment the metabolic changes for transformation of benzaldehyde to L–PAC.