Using virtual reality to improve learning in children with ADHD.

Among the neurodevelopmental disorders, one of the most common is Attention Deficit Hyperactivity Disorder (ADHD); it is characterized by the presence of a persistent pattern of inattention and/or hyperactivity and impulsivity that interferes with cognitive functioning and participation in various activities, including school ones. The various treatment hypotheses include behavioral interventions and, in cases of greater difficulty, pharmacological support. However, to date these methods seem not to show effective results. Recent technological advances have shown the usefulness and potential of Virtual Reality (VR) as a hypothesis for intervention with neurodevelopmental disorders. In fact, in the rehabilitation field, VR technologies allow people with disabilities to experience whatever is difficult or impossible for them in reality. In this regard, the aim of this study was to evaluate the effectiveness of the use of VR-based interventions in children with ADHD. In a previous study we have already validated our idea by investigating how VR had enabled faster learning in ADHD subjects compared to traditional training. Since the sample of our previous study was small, in this study we decided to expand the sample, and compare two training trainings (one traditional and one through VR), developed for learning history in children with ADHD. Our results showed that the participants in both the VR are training and the traditional training showed better learning compared to the starting condition. Furthermore, our analyses also showed that the group that did the VR training performed better than the group that did traditional training. Our study suggests that VR technology could augment and improve traditional treatment options, thereby promoting their effectiveness in managing ADHD symptoms. However, more research is needed to corroborate our hypotheses and allow the results to be generalized.

Attention Deficit Hyperactivity Disorder (ADHD) is a persistent neurodevelopmental disorder characterized by inadequate levels of attention (attention deficit) and difficulties in regulating the level of motor activity (hyperactivity), inability to control impulsivity (impulsivity) [1-3]. The difficulties of self-control, inattention or hyperactivity interfere with the psychological development of the child and hinder the carrying out of common daily activities. This is attributable to an inability of the individuals to conform the behavior to the implicit requests deriving from the external environment; therefore, such inability may have a negative impact on school, family and social skills [4,5].

At school, these children fail to pay attention and work in a disorganized and disordered way. Moreover, they appear restless easily excitable and very unpredictable in reactions. Furthermore, they ignore the instructions on the task to be done and tend to become the "bullies" of the class; similarity, at home they are unable to follow instructions disorganized in play activities and schoolwork. They also fail to keep their turn in a conversation or game, have difficulty delaying gratification and inhibiting emotional reactions; this is explained by difficulties in regulating the frontal lobe, which involves executive functions [6-8].

Such as the inhibitory control, working memory, cognitive flexibility, planning, performance of goal-oriented behaviors [9,10]. On the emotional level, they have a poor tolerance to frustrations, excesses of anger, bullying, dysphoria, low self-esteem, and tend to obtain rejection by peers because they are unable to interact in a functional way; school results are often negative and lead these children to stop at a lower level of education than they could reach [11-13]. Currently, parent training, drug treatment and behavioral therapies are among the most widely used rehabilitation techniques for children with ADHD [14-17].

However, these primary treatment options have many limitations, such as drug side effects, lack of behavioral improvement, high costs, and high time availability [18,19]. Recently, among complementary treatments for ADHD [20], thanks to the technological advancement, Virtual Reality (VR) applications and augmented class simulators have been taken into consideration by several researchers worldwide [21-23], these are technologically advanced systems that simulate Three-Dimensional (3D) environments in which individuals can fully immerse themselves and live a realistic experience [24,25].

These technologies provide a virtual environment that allows people to experience various situations that may be difficult or even impossible to deal with in reality; as such, they are more effective and safer than traditional treatments [26]. In these environments, users can develop different skills and a greater understanding of their problems, which help them better control their behavior in similar real-world situations [27,28].

Recent research has shown that VR, which allows for the addition of information and the superimposition of information on the real world, facilitates the transfer of learning into everyday life and achieves a high level of relevance and motivation [34]. In the case of children, both virtual reality and augmented reality have been considered positive technologies, as they improve the quality of experience, motivation and learning [35]. Infact, they have the potential to enable the design of child-centered and interest-based rehabilitation tasks by increasing the motivation in a safe environment in which the performance is monitored. Therefore, virtual reality stands as a relevant tool for treatment. The psycho-behavioral profile of children with comorbidities is at higher risk of exhibiting externalizing symptoms up to oppositional-defiant disorder, conduct disorder, greater academic failure and a worse school outcome than the disorders taken in isolation [36-38].

Objective of the study

In light of the above, the aim of this study was to evaluate the effectiveness of the use of VR-based interventions in children with ADHD. In a previous study we have already validated our idea by investigating how VR had enabled faster learning in ADHD subjects compared to traditional training [2].

Since the sample of our previous study was small, in this study we decided to expand the sample, and compare two trainings developed for learning history in children with ADHD: One involved the application of special teaching procedures provided by a specialized educator and one was developed through the use of VR and interactive videos. We wanted to verify, which of the two types of teaching would allow a better quality of learning and if it could guarantee an increase in motivation. In particular, the hypothesis tested in the work is that the intervention based on the use of VR can allow for better acquisition and an increase in student motivation.

The sample taken into consideration in this study is made up of 102 subjects aged between 9 and 10, selected from 12 schools in the province of Caserta (Italy). The inclusion criteria were as follows: a) Age between 9 and 10 years, b) Absence of a Specific learning disorder, c) Absence of other childhood neuropsychiatric pathologies present in co-morbidities, d) IQ between 85 and 105, e) Upper middle socio-cultural parental class. After evaluating the possibility of inclusion in the sample, we divided the subjects into two experimental groups consisting of 52 subjects each.

At T0, all the children had performed individual learning and at the end of the first quarter they filled out a history questionnaire with 90 items to assess the starting level during individual learning. Data collection was conducted in and lasted approximately six months. During 4 months (January-April 2021), the two groups performed the two trainings aimed at learning history. At T1 (early May), all children performed a new questionnaire of 90 items with history topics covered during the 4 months of training. It was thus possible to evaluate between T0 and T1 whether there were differences in the percentage of correct answers.

Table 1. Comparison of the two groups at T0.

We then compared G1 and G2 at T0 and T1 to assess whether there were improvements after learning training (within time variable) and then compared both groups at T1 (between-group variable) to see which of the two treatments could allow for better acquisition. We therefore performed a 2*2 mixed two-way univariate ANOVA: factor within groups=time (T0 and T1) and factor between groups=group (G1 and G2).

This analysis highlighted the following results: Time * group interaction is significant [F (1,102)=862.005, p<0.05]. This data indicates that there is a significant interaction between the time and the type of treatment. More specifically, both treatments have a positive effect on correct responses, but this is most significant for the intervention with virtual reality (G2) after training (T1) (Table 2 and Figure 1). 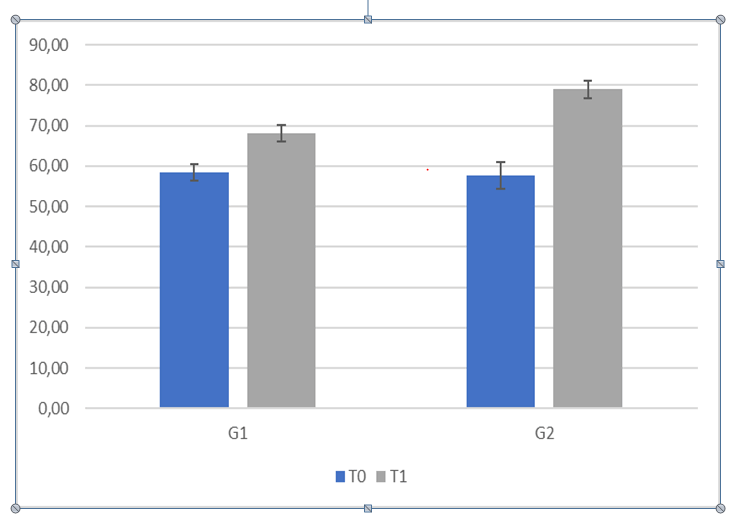 Figure 1:Comparison of the two groups between T0 and T1.

New emerging technologies (including VR) help to increase our knowledge and offer new solutions to various problems; the development of VR environments has allowed the use of new training and intervention tools, which seem more effective and promising than traditional ones. For example, VR environments offer the opportunity to simulate real life situations; with VR it is also possible to create environments that are difficult to experience in everyday life [39]. The use of VR, in recent years, has found positive results in the context of inclusive education and in particular among people with special educational needs (BES), including ADHD. Some authors have investigated the relationship between the use of virtual content and increased interest, motivation and selective and sustained attention [40]. The reduction of some symptoms related to ADHD, such as hyperactivity, inattention and impulsivity, intolerance to waiting, was investigated through the use of serious games specifically designed for educational purposes.

Some studies have indicated the potential of VR in treating and enhancing attention without distraction; others have shown that ADHD children better performed attention tasks through the use of virtual reality as compared to traditional techniques. Rizzo et al. had designed a VR classroom to evaluate attention performance. In their study, participants used an HMD to solve tasks while visual and auditory stimuli were presented. As participants with ADHD make many mistakes and excessive body movements in their tasks, other studies have shown the significant role of virtual reality in improving these conditions and reducing symptoms and behavioral problems [33-36]. However, most virtual reality studies in ADHD populations have focused on assessing attention in a virtual classroom environment but not about the learning process [40].

With our study we wanted to propose two novelties, compared to previous studies: first, we proposed training in learning history through the use of VR, aimed at assessing the learning process, second, we included a substantial number of children with ADHD. The purpose of this study was to consider the effects of using VR on learning among children affected by ADHD by making a comparison with individual learning training with the educator. Our results showed, taking into consideration a larger sample, how the participants in both VR training and in the individual training with the educator showed better learning compared to the starting condition.

In addition, it emerged that the G2 (training in VR) achieved better results than the G1 (training with the educator). Specifically, we found an increase in the motivation of these children to learn, in particular the intrinsic motivation linked to the material used and to active participation in the learning context, which was precisely greater in G2. Therefore, what characterized VR training was, above all the aspect, the active participation and direct involvement in the learning experience. In fact, the use of environments in VR offers the possibility of deeply immersing the senses of users in a wide range of experiences, which involves different cognitive, affective and bodily mechanisms, also favoring the Embodied Cognition. The embodied learning approach, based on the link between body and mind, allows the design of teaching methods that promote the active involvement of children in the classroom, favoring greater attention and involvement than traditional interventions.

The findings indicate that VR technology can be useful in interventions for children with ADHD as they provide stable and controlled stimuli to make constant progress as well as flexibility as they are adapted to the needs of patients. Furthermore, they provide safe learning environments that reduce to the minimum errors, time and costs, improve users’ motivation through pleasant and easy-to-use environments and improve behavioral and cognitive skills in children with ADHD. Extensive evidence also suggests that VR technology could augment and improve traditional treatment options, thereby promoting their effectiveness in managing ADHD symptoms. However, among the limitations of our study, the absence of a follow up on the maintenance of the acquired knowledge limits the generalization of the results.