Urinary MCP-1 as a prognostic biomarker in diabetic nephropathy patients: A systematic review and meta-analysis.

Methods: A systematic search was conducted to collect and analyze all studies published from year 1993 till 2021; that investigated the association between inflammatory cytokine urinary MCP-1 and diabetic nephropathy using the key words, ‘Urinary Monocyte Chemoattractant Protein-1 in Diabetic Nephropathy’. The included studies were extracted from PubMed, Science Direct and Cochrane databases.

Results: From the data searched in the electronic databases, a total of 588 articles were reviewed. Most of the studies did not meet the eligibility criteria. Only 5 studies met the eligibility criteria, and they were included in the analysis. These 5 studies with a pooled sample size of 295 diabetic nephropathy patients had an overall correlation coefficient r=0.694 (95% CI: 0.575-0.784) for disease severity and levels of urinary MCP-1.

Conclusion: Our results indicate that inflammatory biomarker urinary MCP-1 is easy to measure and reproducible which may be used for more accurate prediction of the progression to end stage renal disease.

The characteristic of Diabetic nephropathy is accumulation of matrix proteins which lead to glomerulosclerosis and interstitial fibrosis. Inflammatory cells including macrophages, monocytes and lymphocytes infiltrate the kidney following a complex cascade of pro-inflammatory mediators [1]. Multiple chemokines, adhesion molecules, enzymes and growth factors are involved in the pathogenesis of DN and their urinary levels have been associated with the severity of complications of diabetes [2]. In the course of DN, renal inflammation and an influx of inflammatory cells cause the release of interleukins and cytokines, such as TNF-α, MCP-1, TGF-β1, IL-1β, IL-6, and IL-8, creating a proinflammatory microenvironment that amplifies tissue injury [3]. Several studies have investigated their potential clinical use in studying DN. Infiltration of the diseased kidneys by monocytes/ macrophages is a hallmark of diabetic nephropathy. In DN, as in other glomerulonephropathies, mesangial monocyte/ macrophage infiltration and activation play an important role in glomerular damage. Macrophages are thought to play a role in tubulointerstitial injury in DN [4]. Recent evidence highlights the role of Monocyte Chemoattractant Protein 1 (MCP-1) in the DN and indicates that it is a major factor influencing macrophage accumulation in kidney disease. MCP-1 is produced by endothelial cells, vascular smooth cells, keratinocytes, fibroblasts, mesangial cells, tubular epithelial cells, lymphocytes, and monocytes/ macrophages in response to various proinflammatory stimuli. Member of the chemokine family, it is the most potent known monocyte chemoattractant and is upregulated in DN. Its expression has been identified in kidney diseases which involve significant inflammation [5]. MCP-1 is a secreted protein which specifically attracts blood monocytes and tissue macrophages to its source, via interaction with CCR2, its cell surface receptor [6]. Up-regulation of MCP-1 may be a common regulatory pathway involved in the progressive diabetic nephropathy as well as inflammatory renal diseases.

A substantial proportion of patients with type 2 diabetes have non-proteinuric Chronic Kidney Disease (CKD) [1] and in patients with type 1 diabetes and proteinuria, many regress to normal values during follow-up. The current gold standard for detecting and predicting DKD is microalbuminuria. However, there are some limitations such as; low sensitivity and high variability. Therefore, proteinuria is an imperfect surrogate finding and other markers are needed to assess prognosis and monitor response to treatment. There is an urgent need to explore greater sensitivity and specificity for early detection of DKD and more accurate prediction of progression to end-stage renal disease. Such biomarkers must be easy to measure, reproducible and demonstrate an additive value to known risk factors of progression such as proteinuria, glycemic and blood pressure control. Current evidence from both human and animal studies suggests that kidney MCP-1 production plays a pivotal role in the development and progression of diabetic nephropathy. Type 2 diabetes mellitus patients excrete high levels of MCP-1 in the urine, which has a correlation with amount of albumin excreted in urine. Macroalbuminuric patients with diabetes had higher MCP-1 levels compared with micro or normoalbuminuric patients [4]. It was also suggested that increased urinary MCP-1 expression appears earlier than microalbuminuria in diabetes and several studies have reported that urinary MCP-1 levels are increased in inflammatory renal diseases and diabetic nephropathy [4].

Herein, we aimed to perform systematic review and metaanalysis of urinary MCP-1 as an inflammatory biomarker in diabetic nephropathy for prognosis and developing specific therapies against MCP-1.

The Protocol is registered with Prospero (CRD42021283207). The study was reported as per Preferred Reporting Items for Systemic Reviews and Meta- Analysis (PRISMA-2020 guidelines). A Comprehensive systemic search of published literature was conducted. The articles relevant to this study were searched from PubMed, Science Direct and Cochrane databases from year 1993 till 2021. ‘Urinary Monocyte Chemoattractant Protein-1 in Diabetic Nephropathy’ was used as key word for the search. We did not use any restrictions in the electronic search for trials except for a language restriction; each article was reviewed by two independent reviewers for inclusion of the articles in the study.

Table 1. Baseline characteristics and methodological quality of all included studies.

The Primary outcome measure considered for review was correlation of urinary MCP-1 levels with albuminuria in DN patients.

The MedCalc Version 20.009 software was used for metaanalysis. We calculated Pearson correlation co-efficient (r) with their 95% confidence intervals (95% CIs) to evaluate relationships. The Z test was used to estimate the statistical significance of pooled statistics. The Cochran’s Q statistic and I2 test were used to evaluate potential heterogeneity between studies, P<0.05 was considered significant.

Initially, the searched keywords identified 588 articles. We reviewed the titles and abstracts of all articles and excluded 581 articles; two duplicate studies were removed. Finally, 05 case–control studies were found to meet the inclusion criteria and were included in this meta-analysis (Figure 1). 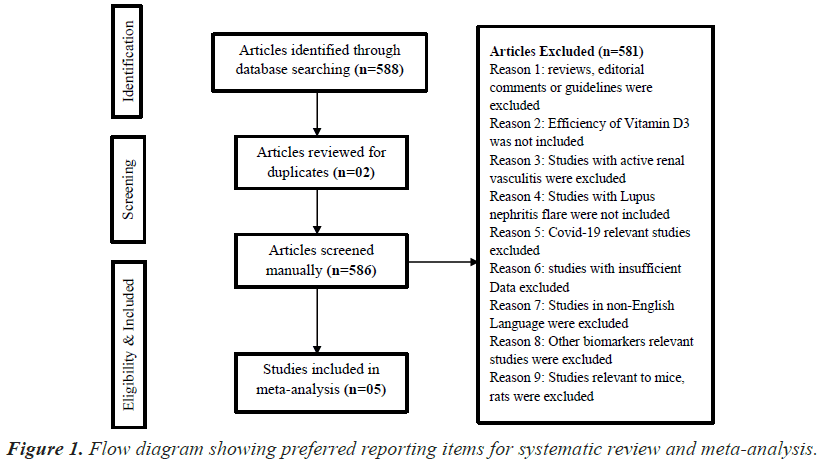 Five studies focused on the correlation between urinary MCP-1 levels and Albuminuria in Diabetic Nephropathy patients. A total of 295 patients were investigated in these 5 trials. The age of study population ranges from 52 to 66 years with Type 1 and 2 DM. Out of 295 Patients, Normo albuminuria patients were 131 and micro and macro albuminuria patients were 164.Our results demonstrated that Diabetic Nephropathy patients had an overall correlation coefficient was found to be r=0.694 (95% CI: 0.575-0.784, P<0.001), heterogeneity I2 (Inconsistency) 65.54%. The studies included both Out-patients as well as In-patients at Japan, Egypt, India and China. The correlation values between MCP-1 and albuminuria in these studies is given in Table 4 and represented in Figure 2 as forest plot.

In diabetic patients, high blood glucose can damage kidney blood vessels, leading to kidney dysfunction, which makes it easier to get kidney disease. Monocyte chemoattractant protein-1 is a specific chemokine that circulates to the site of inflammation to activate monocytes. MCP-1 regulates renal interstitial inflammation, tubular atrophy, and interstitial fibrosis by recruiting monocytes/ macrophages into renal tubulointerstitium. Increased expression of MCP-1 in renal tubuli by an increase in the leakage of plasma protein from glomerular capillary to tubular fluid, may contribute to renal tubular damage and accelerate the progression of diabetic nephropathy. Up regulation of MCP-1 indicates glomerular injury which can be used in the prognosis of diabetic nephropathy and thereby can serve as a therapeutic target in treating diabetic nephropathy. This result suggests that MCP-1 is produced in renal tubular cells and released into the urine in proportion to the degree of proteinuria (albuminuria), and that increased MCP-1 expression in the renal tubules is associated with tubular damage. We therefore conclude that severe proteinuria itself may accelerate the progression of diabetic nephropathy by increasing MCP-1 expression in renal tubules. The measurement of urinary MCP-1 may be useful as a noninvasive technique in prognosis of renal failure and monitoring the response to therapy. Increased urinary MCP-1 expression appears earlier than microalbuminuria in diabetes and hence early detection of development of diabetic nephropathy would be possible and are at risk of progressing to ESRD.

The studies included in our analysis showed that diabetic nephropathy patients have higher levels of urinary MCP- 1, suggesting an association of urinary MCP-1 with renal tubular damage. Mesangial cells in the diabetic environment may generate MCP-1, which may have a role in the infiltration and activation of monocytes and macrophages into the glomerulus and may contribute to the initiation and progression of diabetic nephropathy.

The data also suggest that diabetic nephropathy could be immune mediated renal disorder with potential role for anti-inflammatory agents in altering the disease progression. Urinary MCP-1 is highly correlated with other diabetic nephropathy risk variables in diabetic patients with declining renal function. It is necessary to research the diagnostic utility of urine MCP-1 to evaluate the prognosis and efficacy of treatment.

This work was done under ICMR-PDC. We thank Dr. Nilima Kshirsagar Emeritus Scientist, Member TAG, Chairperson BMS SAG and former National Chair Clinical Pharmacology ICMR for her valuable comments and suggestions in preparation of this manuscript.