To evaluate the factors affecting post operative stress-related urinary incontinence (POSUI), as well as the treatment and prevention of POSUI. Four hundred and eighty-nine patients were retrospectively reviewed between February 1, 2007 and December 31, 2009 who were with grade 2 or greater uterine and/or vaginal vault prolapse without urinary incontinence. Patients merely with pelvic organ prolapse (POP) were performed surgical repair, and concomitant surgical corrections of patients with occult incontinence were performed by modified TVT-O procedure. Age, vaginal parity, body mass index, menopausal statusand operation methods were recorded. After a follow-up of one year, lower incidence of POSUI occurred in patients underwent TVT-O procedure together with surgical repair than those merely underwent surgical repair (OR=0.58, p=0.000). It is worthwhile to identify whether patients have occult incontinence before operation. Performing TVT-O procedure together with surgical repair of POP proves to be effective to prevent POSUI.

Gynecologists and urologists remain challenged by postoperative stress-relatedurinary incontinence (POSUI) in patients following surgical repair/manipulation. Pelvic organ prolapse (POP) and stress-related urinary incontinence (SUI) are two common health-related conditions affecting women worldwide. Both are believed to be resulted from pelvic floor damage in forms of fascial defects, muscular weakness, or nerve injuries. Although it is not uncommon for POP and SUI to co-exist in one patient, the relationship between them is complicated. Any condition related to either event and/or, its treatments may be a risk factor for the development of the other [1]. For instance, women with POP may be continent despite the loss of vaginal and urethral support as a result of either kinking or external compression of the urethra [2,3]. This “masked” form of SUI can appear once the prolapse is alleviated by any method such as a pessary or surgical repair. Therefore, there is a significant risk of developing SUI when the prolapse is alleviated or repaired.

Women with severe genitourinary prolapse may be continent in spite of a weak urethral sphincter. When the symptom of urinary incontinence is covered by organ prolapse, it is called occult incontinence. Many studies revealed that occult incontinence was an important reason of POSUI [4]. This study aims to estimate the incidence of SUI after surgical repair and evaluate its impact.

Eligible patients who had undergone surgical repairs for any degree of POP (based on the Baden--Walker system) between February 1, 2007 and December 31, 2009 were selected to participate in this study.The institutional ethics committee of Tongji Hospital, affiliated to Tongji University, Shanghai, China, approved this study. Exclusion criteria included genuine SUI, previous antiincontinence surgery, and concomitant pelvic disease requiring laparotomy. All participants underwent a thorough pelvic examination to assess the degree of the prolapse.

All women underwent an objective assessment of SUI with the prolapse lying outside. They then underwent repositioning of the prolapse using a well-fitting ring pessary. We made sure that there was no urethral compression, and then patients were asked to drink water. At the first voiding sensation, their bladder volume was estimated ultrasonographically. A perineal pad was applied when the bladder volume was between 150 and 200 ml.

Each participant underwent a regimen of provocative exercise that included 1) stair climbing equivalent to 1 flight of steps up and 1 flight of steps down; 2) standing up 10 times from a sitting position; 3) coughing strongly 10 times; and 4) stooping 5 times to pick up small objects from the floor. At the end of this exercise regimen, the pad was removed and examined for any orange discoloration, which was interpreted as a positive test result. Those patients were diagnosed as occult incontinence.

All participants then underwent of surgical pelvic floor, including anterior and/or posterior vaginal repair. For the one who had occult incontinence, TVT-O was performed at the same time. All patients were regularly examined one yearpostoperatively to look for the evidence of urinary incontinence both subjectively and objectively.

Data were given as mean ± SD for normal distributions. Statistical analysiswas carried out by using the SPSS® statistical package, version 16.0 (SPSS Inc., Chicago, IL, USA) for Windows®. Differences between groups were analyzed using chi-square test. A p-value< 0.05 was considered to be statistically significant.

Four hundred eighty-nine (489) eligible women were enrolled. Three hundred and twelve (312) patients returned to hospital for follow-up and 177 completed the questionnaires via telephone or email with a response rate of 100%. 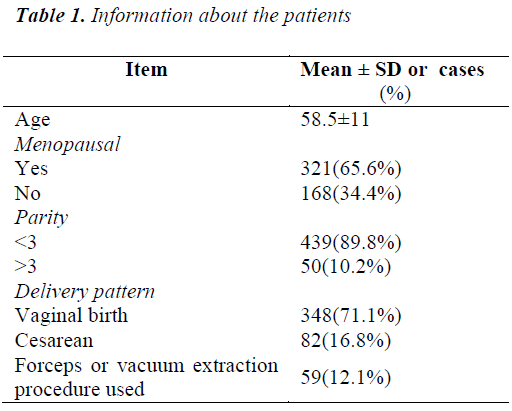 Table 1: Information about the patients.

After a follow up of 1 year, there were 4 cases with stage IV of POP at enrollment showed recurrence of stage III. Re-operation was conducted 2 months laterin three patients, and one was performed after 3 months. Five cases showed recurrence of stage II and six cases stage I, none of which underwent operation again. Recurrent rate was 3.1% (15/489).

Regarding to the urinary status after operation, 32.9% (171/489) patients complainedabout post-operative stress incontinence. Urinary frequency, urinary urge, leakage when coughing or sneezing, urinary dysfunction, vesical tenesmus were investigated. After surgery, there was a significant lower incidence of the above five symptoms than that of the pre-operation (p<0.05). Prevalence of the new onset of urinary frequency, urinary urge, dysuria and vesical tenesmus was 18.9%, 10.0%, 8.9%, 5.7 % and 6.8%, respectively. Rate of POSUI in patients who had undergone TVT-O together with pelvic repair was significantly lower than the ones without TVT-O (25% vs. 38.1%, OR=0.58, p<0.000, Table 3).

Pelvic floor dysfunction is a major health issue for women. During their lifetime, 11% of all women will undergo at least one operation for pelvic organ prolapse, urinary incontinence or both [5]. Moreover, severe genitourinary prolapse may cover the symptoms of stressrelated urinary incontinence (SUI) in clinically continent women, who are considered to have high risk for developing symptomatic SUI after pelvic reconstructive surgery. Women with severe genitourinary prolapse may be continent in spite of a weak urethral sphincter, as the kinking effect of the prolapsed bladder on the urethra can cause urethral occlusion and increase the intraurethral pressure. The cushioning effect of the large cystocele absorbs some of the intra-abdominal pressure and prevents its transmission entirely to the bladder, thus preventing urinary leakage through an incompetent urethra. These patients may become incontinent once the prolapse is eased by a pessary or the following vaginal reconstructive surgery [2]. According to the literature, 36% to 80% of women with advanced vaginal prolapse are at risk for SUI after vaginal reconstructive surgery [2,3,6-8].

The highest incidence of POSUI to date was reportedby a recent trial that women were randomized to undergo abdominal sacrocolpopexy with or without Burch colposuspension as an anti-incontinence procedure (the CARE study)[9-11]. Women with no reported symptoms of SUI were eligible to participate in the CARE study. At 1 year follow-up, 40.1% (61/153) of women who did not receive the anti-incontinence procedure met one or more of the endpoint criteria for POSUI (according to symptoms: 31.6%; according to cough stress test: 5.9%, and according to additional treatment: 11.8%). It was significantly higher than the group who received the anti-incontinence procedure (25%)[10]. At the 2-year follow-up, the SUI endpoint was reported in 45.2% (70/155) and 32% (47/147) of women, respectively [11]. In our study, the incidence of POSUI was 32.9% (171/489) in total, 38% in the group with surgical repair only, and 25% in the group with both TVT-O and surgical repair.

Inserting a vaginal pessary of suitable size is known to simulate surgical correction in women with vaginal prolapse. In one study, using a ring pessary to reduce prolapse, unmasked occult SUI was observed in 44.8%(219/489) of the women with a large cystocele [2], which was lower than that of the previous report [12]. For these women, we performed TVT-Oprocedure together with surgical repair. One year after follow up, the rate of POSUI in patients with TVT-O and pelvic repair was significantly reduced than those without TVT-O procedure (25% vs.38.1%, OR=0.58,p<0.000). OR value of 0.58 implied that the TVT-O procedure was a protective factor for POSUI, whichis consistent with the previous report [9-11]. It might imply that it is important to identify the existence of occult incontinence before operation. For women with occult incontinence, performing antiincontinence surgery, such as TVT-O, is helpful to eliminate or reduce the risk of POSUI.