Coronary artery disease (CAD) is a chronic inflammatory disease, characterized by dis-turbed cardiac functions due to imbalance between oxygen supply and demand. Atheroscle-rosis is the hallmark of CAD, occurring by deposition of yellow fibro fatty plaques known as atheroma which contains cholesterol, lipid and lipophages along with uric acid crystals. Ele-vated uric acid levels have been found to be associated with increased platelet aggregability and its activation thereby increasing the risk of coronary thrombosis. Hence, the present study was planned to explore the role of uric acid in causation of CAD and whether it act as an independent risk factor or in combination with other parameters. Present study included 50 CAD patients and equal number of age and sex matched control healthy volunteers. The study revealed a significant increase of serum uric acid levels in CAD patients as compared to healthy controls (p<0.001). Other studied biochemical profiles include serum Total Cho-lesterol (T-C), Low Density Lipoprotein Cholesterol (LDL-C) and High Density Lipoprotein Cholesterol (HDL-C), Very Low Density Cholesterol (VLDL-C) and Triacylglycerols (Tgs). T-C and LDL-C were found to be significantly elevated whereas HDL-C levels were ob-served to be significantly lower in CAD patients than controls. There were no significant changes in the levels of VLDL-C and serum triglycerides in patients in comparison to nor-mal individuals. It was concluded that elevation in serum urate levels could be one of the possible risk factor responsible for CAD in conjunction with other risk factors.

Coronary artery disease (CAD) is the most common, seri-ous, chronic and life threatening disease. It is the leading cause of death all over the world with > 4.5 million deaths occurring in the developing world [1]. The CAD causes more deaths, disability and economic loss than other non communicable diseases [2].

According to WHO reports, by A.D 2020 up to three quarter of the deaths in developing countries would be resulting from cardiovascular complications[3]. Major factors that initiate or accelerate the process of atheroscle-rosis include diabetes mellitus, hypertension, increase plasma lipoprotein , cigarette smoking, alcohol, oxidized Low density lipoprotein (OX-LDL), stress, male gender,infections like chlamydiae pneumoniae and herpes virus etc. The basis of atheroma is damaged endothelium caus-ing platelet adherence and formation of clot leading to atherosclerosis [4]. Ischemia of cardiac and visceral tissue promote generation of adenosine which is rapidly de-graded by endothelium into uric acid undergoing rapid efflux to the vascular lumen due to low intracellular pH and negative membrane potential[5]. Under ischemic con-ditions, xanthine oxidase activity and uric acid synthesis are also increased in vivo [6]. Elevated serum uric acid may act as a marker of underlying tissue ischemia [7].

Uric acid has also been found to promote LDL oxidation in vitro, which is a key step in progression of atheroscle-rosis [8]. It has been reported that allopurinol restores en-dothelial function in chronic cardiac failure patients [9]. Some studies describe uric acid as independent risk factor of CAD while other suggest it act as an antioxidant and has protective effect in CAD. The present study was planned to study the role of uric acid, if any, in causation of disease in CAD patients and whether uric acid is an independent risk factor or act in conjunction with other parameters leading to endothelial injury.

The present study was carried out in the department of Biochemistry, Government Medical College and Hospital, Amritsar. Fifty CAD patients attending Medicine OPD and admitted in the wards were selected for this study. 50 age and sex matched healthy volunteers from general population were also included in the study who served as controls. Out of these 50 subjects, 30 were females and 20 were males with age group ranged between 35-60 years. CAD patients were classified into two categories, first were on the basis of age groups and second were on the basis of risk factors involved in the causation of CAD. The patients and controls were divided into 3 groups, group I, II and III each consisting of 8, 20 and 22 subjects.

Subjects on diuretics, patients of gout and those taking oral contraceptives were excluded from this study. His-tory was recorded on proforma, consents were taken and subjects were informed about study to be carried out. The study started after clearance from Institutional Ethical Committee. Before collecting the blood samples, patients were advised to proceed on overnight fast of 12 hrs. Blood samples were collected around 08 to 09 hours from both controls as well CAD patients. 6-8 ml venous sample was drawn with a disposable syringe under aseptic condi- tions. The blood was allowed to stand for half an hour, after clot formation, the supernatant was centrifuged and tests were performed subsequently. Serum samples were analyzed for serum uric acid, and lipid profiles by semi-autoanalyzer (10-12).

The data analysis was carried out by using SPSS (Ver.15.0). Results were expressed as Mean ± Standard Deviation. The statistical significance of difference be-tween the various groups was determined by using the student’s t-test; p > 0.05 not significant (NS), p value be-tween 0.05 to 0.001 moderately significant and p < 0.001 highly significant.

Uric acid concentration in different age groups of normals and CAD patients has been described in Table II. There have been no change in serum uric acid levels in healthy subjects between different age groups; however, the levels increased markedly with the advancing age in CAD pa-tients with a mean of 6.30 ± 2.15 to 8.66 ± 2.48 between age groups I and III (Table II ). No significant variation was observed in serum urate levels between men and women participants.

Uric acid concentration in different age groups of normals and CAD patients has been described in Table II. There have been no change in serum uric acid levels in healthy subjects between different age groups; however, the levels increased markedly with the advancing age in CAD pa-tients with a mean of 6.30 ± 2.15 to 8.66 ± 2.48 between age groups I and III (Table II ). No significant variation was observed in serum urate levels between men and women participants. Serum uric acid levels were further classified according to various risk factors including dia-betes, hypertension, smoking, alcohol and obesity and maximum elevation was recorded in diabetes mellitus + hypertension and obesity patients ( Table IV ). 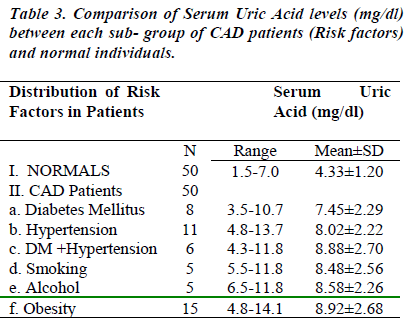 Table 4: Comparison of lipids and lipoprotein levels in patients of CAD to that of normal individuals.

Highly significant increase (p<0.001) in the levels of uric acid in CAD patients indicates that CAD has a definite correlation with increased levels of serum uric acid. Esti-mation of uric acid may be used as diagnostic tool along with other biochemical parameters | 13 ].Uric acid may be the indicator for increased oxidative stress and super ox-ide free radical production [14].Hyperuricemia is predic-tive for the development of hypertension and CAD[15].It has been concluded that uric acid acts as an independent predictor of mortality in CAD [16]. Cox regression analy-sis showed that for each 1.2 mg/dl rise in uric acid levels there was rise in cardiovascular mortality and IHD mor-tality.

Present study showed significantly higher levels of total cholesterol in patients than controls. This statement is in agreement with the fact that cholesterol was prominent constituent of atherosclerotic plaque[17].

HDL is considered to be good cholesterol. A negative correlation exists between HDL concentration and clini cally evident atherosclerosis [18]. Similar findings have been shown by present study wherein HDL-C levels were found to be significantly lowered (0.05) in patients of CAD. The present study reported that LDL-C levels were significantly raised (p<0.05) in CAD patients than con-trols. These findings are in consistence with previous re-ports which proved that increased levels of LDL are asso-ciated with risk of atherosclerosis[19].

There was no statistically significant difference in the mean serum triglyceride and VLDL-C levels in patients of CAD as compared to controls. These observations con-cluded that triglycerides and VLDL were probably not the participated factors for the development of CAD [20].

About one quarter of hypertensive patients has had co-existent hyperuricemia and it is found that asymptomatic hyperuricemia predicts future development of hyperten-sion irrespective of renal functions[21]. Study carried out in Finland in 1982 observed that raised uric acid levels were associated with obesity, impaired glucose tolerance, hypertension and family history of heart disease and these observations matched with findings of our study [22]. As uric acid level was found to be raised along with other risk factors, it could be concluded that serum uric acid may be one of the additional risk factor for the develop-ment of CAD.