Decubitus is an area of localized damaged skin due to pressure, shear, or friction. It is common in the elderly and immobile patients; e.g., patients with spinal cord injury (SCI); wasting hospital and health care costs. Pressure-relieving beds, mattresses and seat cushions are widely used as aids to prevent decubitus in both institutional and non-institutional settings. As far as we searched in Medline, we could not find in the English literature reports about the risk of decubitus caused by a toilet seat with an electric heating system. We, therefore, present herein two cases with decubitus, which presumably resulted from prolonged sitting on a toilet seat with an electric heating system.

A 43-year-old woman suffered from SCI consequent to a traffic accident and was followed up at our outpatient clinic. She was paraplegic due to fracture-dislocation between the bodies of the 10th and 11th thoracic vertebrae. The American Spinal Injury Association (ASIA) impairment scale [1] was “A”. After 1.5 months, she underwent posterior thoracic interbody fusion, and postoperative rehabilitation was conducted. Seven years postoperatively, she noticed left dorsal thigh decubitus, measuring about 4 cm x 4 cm in size (Figure 1A). She came to our outpatient clinic, and we performed debridement and saline washing for 2 weeks. However, the wound showed no improvement, and she consulted dermatologists. It was diagnosed as decubitus and low-temperature burn caused by 60 to 90-minute sitting on a toilet seat. The seat itself became warm by an electric heating system. On careful visually examination of the lesion, her decubitus fit closely with toilet seat, and the toilet warmer was directly in contact with the decubitus. She was treated with saline washing and ointment containing sucrose and povidone-iodine, and was advised not to use toilet seat with electric heating system without pressurerelieving cushion. After one month, her decubitus healed and did not recur during the following four years (Figure 1B). 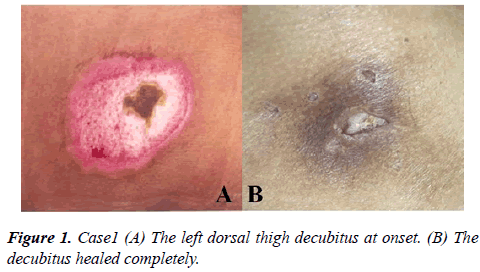 Figure 1: Case1 (A) The left dorsal thigh decubitus at onset. (B) The decubitus healed completely.

A 32-year-old woman suffering from SCI due to a traffic accident came to our outpatient clinic. She had 3rd thoracic SCI due to fracture-dislocation between the bodies of the 2nd and the 3rd thoracic vertebrae. ASIA impairment scale was “A”. On the same day of the accident, she underwent posterior cervical and thoracic fusion. 13 years after injury, she had a decubitus on the left dorsal thigh, measuring 7 cm x 5 cm, shaped like a pocket. She was treated with debridement and saline washing in the outpatient clinic, but the wound did not change. Consulting with dermatologists, she was diagnosed as having decubitus resulting from compression and lowtemperature burn due to prolonged sitting on a warmed toilet seat with an electric heating system. We revealed that the shape and region of the decubitus of her dorsal thigh was coincided with the thigh directly touching warmed toilet seat. Her wound was treated with saline washing and ointment, and we advised her to use a pressure-relieving toilet seat. After one month her decubitus healed completely and did not recur over two years (Figure 2). The shape and size of decubitus were clearly specific for a toilet seat. 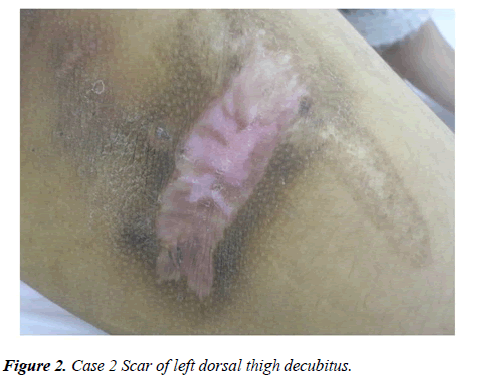 Decubitus is defined as a lesion, such as reactive hyperemia, with blistered, broken or necrotic skin, on the skin surface that results from pressure [2]. Patients with SCI, are paraplegic or tetraplegic, and have a high prevalence of decubitus. As decubitus often prolongs the hospital stay, decubitus prevention is a main objective in the SCI rehabilitation.

The patients with SCI had significantly higher peak-pressure of the buttock area during sitting than that of the healthy subjects [3]. Accordingly, wheelchair cushions are frequently prescribed to them to relieve pressure and reduce the risk of decubitus. Nonetheless, previous studies revealed that no single cushion was optimal for all patients with SCI [4]. Furthermore, there was no cushion that could universally fit for all patients or for any subgroup of patients, requiring pressurereducing devices [5]. Due to these problems, individual prescription of a wheelchair cushion is essential for any SCI patient for optimal pressure relief. Because of the longer time for bowel movement, it is necessary for the patients with SCI to use a cushion to relieve pressure during defecation. In Japan, many toilet makers have recently developed several types of high-tech toilets, equipped with anal washing system by sprayed water and drying with air, and also with an electric seat-heating system. These equipment’s provide comfort, particularly during the cold season, and encourage defecation. However, because the patients with SCI need longer time for bowel movement, especially if they have buttock or dorsal thigh anesthesia, they are vulnerable to burns during sitting on a toilet seat heated at lower temperature.

During sitting on the toilet seat, the buttock or the dorsal thigh are subjected to high pressure, so that pressure alone might cause the issues. But in case of our 2 patients with ASIA-A, they sit on a warm seat for a prolonged time, then the intractable decubitus occurred. It is known that the patients with SCI are at risk for burns or ulcers to the insensate regions. They were advised not to use heated toilet seat, and the decubitus healed immediately. So, we believe it is correlated not only with prolonged sitting but with an electric heating system of the toilet seat. We could not find in the English literature any reports about the risk of decubitus consequent to prolonged sitting on a toilet seat with an electric heating system in a sensory-deprived patient with SCI. Our report should draw our attention to an unusual site of decubitus and certainly provide useful information for patients with SCI and their caregivers.

In conclusion, we have to pay attention to burns of the dorsal thigh following prolonged sitting on heated toilet seat during defecation for the patients with SCI.