Research on the electro-oxidation of glutathione (GSH) may give insight into its real oxidation mechanism on biomembranes. In the present work, the unusual oxidation process of GSH on an Au electrode was probed by cyclic voltammetry (CV) technique. Voltammetric studies showed that –SH in GSH was the unique target of electro-oxidation by excluding the other potential oxidation sites (amido group, carboxyl group and side-chains of glutamic acid and glycine) and the feeble influence of S–Au interaction. As a result of spatial baffle, GSH was directly oxidized to GSOxH (x = 2, 3) without forming the intermediate of glutathione disulfide (GSSG). The unusual oxidation process differs from the twostep oxidation processes of cysteine –SH on the Au electrode and the oxidation of –SH in dissolved GSH, but is similar to the biological oxidation of GSH in vivo on biomembranes, where the steric hindrance still exists.

Reduced glutathione (GSH) is the most abundant and important intracellular thiol because of its essential role in metabolism [1], cellular homeostasis [2], as well as in protecting cells against oxidative stress [3-6]. For this reason, it is generally used as a model in the assessment of oxidative stress, the redox status of cells and the toxicity of pollutants [7-9]. In these processes, GSH is usually oxidized into “oxidized glutathione” (GSSG) and the depletion of GSH is found in a variety of diseases [7-11]. Hence methods that can accurately and specifically evaluate the redox states of GSH are crucial for understanding the toxicity of pollutants and detoxification mechanisms.

Phosphate buffer was prepared using a pHs-3C pH meter (Shanghai Pengshun Scientific Instrument Co. Ltd.). Samples were degassed in a 2 XZ-0.5 vacuum pump and stored in a vacuum desiccator. A CHI 802 B electrochemistry workstation was used for all experiments and was equipped with a standard tri-electrode system, which consisted of an Au working electrode, a saturated calomel reference electrode (SCE), and a platinum wire counter electrode. The Au electrode was polished using a fine sand paper (0.25 mm) and 1 μm, 0.3 μm and 0.05 μm α-Al2O3 powders successively. Then the electrode was rinsed with distilled water and dipped into Piranha solution for 10 mins. After ultrasonic cleaning in distilled water and ethanol, the electrode was stored in ethanol.

Being sensitive, selective, simple, and clean, electrochemical technology has been widely employed to evaluate the redox processes of biomoleculars [12-16]. At the same time, the direct or indirect electron transfer processes between biomolecules and electrodes are similar to the redox processes on the surface of biomembranes where reactive oxygen species forms and biomolecules are oxidized [16]. Therefore this technology is suitable for simulating and explaining the oxidation mechanism of GSH in vitro and in vivo (especially on biomembranes) [17].

The present study successfully applied cyclic voltammetry to research the electro-oxidation of GSH on an Au electrode in view of the significance of GSH. The oxidation sites in GSH and GSSG were fixed in comparison with the electrochemical characteristics of glutamic acid, glycine, cysteine, and cystine. The possible influence of S–Au interaction was also ruled out by evaluating the cyclic voltammograms of corresponding modified electrodes and the control steps of GSH oxidation. And the unusual oxidation process for GSH was probed in comparison with the oxidation mechanisms of cysteine, cystine, GSSG and dissolved GSH.

Series of phosphate electrolytes (pH 7.0) were prepared by adding 0.05 mol Na2HPO4 into 0.05 mol H3PO4. Quantitative insulin was weighed up and added into the phosphate buffer. After deoxidized with a vacuum pump, the samples were scanned in a tri-electrode cell. Idiographic experiment conditions (temperature, scan rate and scan range) are described in Results and discussion section.

To rule out the influence of S–Au interaction on the oxidation processes of cysteine, cystine, GSH or GSSG, modifications of Au electrodes by these compounds were performed as follows. First, Au electrodes were separately incubated overnight in a 1 mmol L-1 solution (cysteine, cystine, GSH or GSSG) to form the modified electrodes. Following rinsing with distilled water and absolute ethanol, electrochemical tests of modified electrodes in 50 mmol L-1 phosphate electrolte were carried out immediately.

The cyclic voltammograms of phosphate buffer, GSH and GSSG solutions were scanned from -1.6 V to +1.6 V and shown in figure 1. 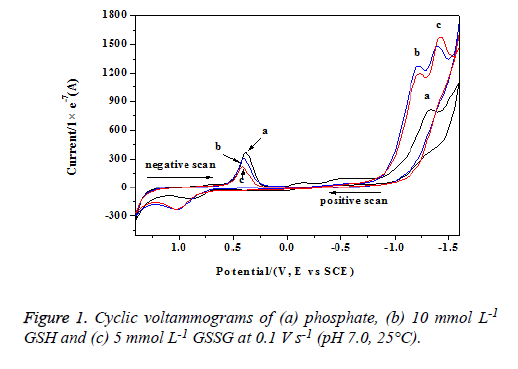 From curve a, we can found that phosphate buffer had two anodic peaks (near -1.34 and 0.89 V) and two cathodic peaks (-1.35 and 0.39 V). Because phosphate could hardly be oxidized at such low potentials [17,18], these peaks were corresponding to the redox processes of Au electrode. The anodic peaks arised from the formation of AuOx and Au(OH)x, while the cathodic peaks corresponded to the reductive processes. The related reactions occurred by the following mechanisms [18]:

Identification of the oxidation sites in GSH and GSSG

To identify the oxidation sites in GSH and GSSG, the electrochemical characteristics of all related amino acids within GSH/GSSG were studied in some detail. In table 1, cysteine had two anodic peaks near 0.65 and 0.89 V, cystine had one anodic peak near 0.85 V, while glutamic acid and glycine could not be oxidized. Results on their anodic peak potentials showed that cysteine residue in GSH and cystine residue GSSG were the potential oxidation targets due to their evident anodic peaks. Compared with glycine, we found that the amido and carboxyl groups in cysteine could not be oxidized either and thus the oxidation sites were limited to their –SH and S–S bond.

However, according to previous reports, there was a strong affinity between S and Au [18,19]. To ascertain the feeble influence of S–Au interaction on the oxidation processes in this research, the electrochemical characteristics of Au electrodes modified by cysteine, cystine, GSH, and GSSG were also evaluated (Table 2). By comparing with the results in figure 1 and table 1, we found that the anodic peak potentials of modified electrodes were closed to that of the corresponding sulfur containing compounds. Therefore, the formation of anodic peaks should come from the oxidation processes of sulfur containing compounds instead of the S–Au bonds.

Mechanisms for above anodic peaks could also be evaluated by confirming their control steps. Provided these peaks were attributed to S–Au bonds, the related electrochemical processes on Au electrode should be controlled by adsorption. In fact, experiments on the influence of scan rates indicated that the oxidation processes of cysteine, cystine, GSH, and GSSG were controlled by diffusion (for example, the linear regression curve between the currents and scan rates of anodic peak was: ip = 69.52 - 28.05 ν 0.5, R = 0.9939, ip: 10-7A, ν: mV s-1). Therefore, the anodic peaks of these sulfur containing compounds were attributed to the direct oxidation of SH or S– S bond rather than the formation of S–Au bonds.

To ascertain the oxidation mechanisms of SH in GSH, we measured the electrochemical responses of cysteine, saturated cysteine and GSSG. Saturated cystine had an anodic peak near 0.85 V (see Figure 2, curve b) and the peak current was much higher than that of phosphate buffer, suggesting new oxidation product(s) formed. As mentioned above, the anodic peak arised from the oxidation of S–S bond and the reaction should occurred by the following mechanism: 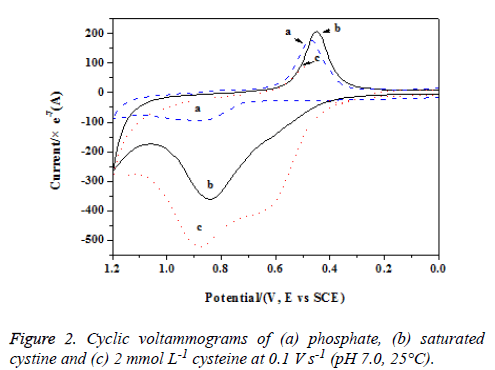 Compared with cystine, cysteine had an adjacent anodic peak to cystine and one more anodic peak at a lower potential (0.65 V, Figure 2, curve c). The newly formed anodic peak for cysteine had been probed in our previous study and it arised from the direct oxidation of –SH, forming cystine. At higher potentials, the formed cystine could be further oxidized into CySOxH (x = 2, 3) and brought about an anodic peak as that of saturated cystine. Because the anodic peak of saturated cystine was much lower than the adjacent peak of cysteine, the intact cysteine on electrode surface could be further oxidized into sulfonic acid and sulfinic acid:

But for GSH and GSSG, both of them merely had one anodic peak near 1.02 V. Thus, the –SH in GSH could not be oxidized into an S–S bond (forming GSSG) on the electrode, unlike the oxidative pathway of –SH in cysteine (Figure 3; if so, there should be another anodic peak at a lower potential). The unusual oxidation process also differed from the oxidation of GSH in solutions or in organisms, where the dissolved GSH is prone to forming GSSG (Figure 3c) [2,4-7]. Explanation for these phenomenons is that –SHs in different GSHs can hardly access to each other on electrode surface due to the steric hindrance from glycine and glutamic acid residues beside them (Figure 3a). In view of the two reductive peaks near -1.23 and -1.40 V, GSH could be directly oxidized into two oxidation products on Au electrode and these reactions could occur by the following mechanisms: 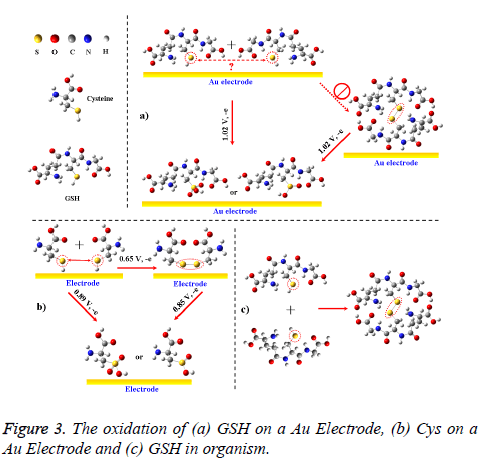 For GSSG, the oxidation mechanism should be similar to cystine and the reaction could occur as follow:

In summary, cyclic voltammetry was shown to be well suited for simulating and evaluating the oxidation processes of GSH. Compared with the electrochemical responses of phosphate buffer, GSSG and all related amino acids within GSH, we demonstrated that –SH in GSH and cysteine were the target of electro-oxidation and the oxidative products were GSOxH and cystine + CySOxH. But due to steric hindrance, the –SH in GSH could hardly be oxidized into a disulfide bond, unlike the reaction of cysteine on an Au electrode and the oxidation of – SH in dissolved GSH. The new finding (the unusual oxidation of GSH) will give us a clue for understanding of GSH oxidation in vitro and in vivo on biomembranes, where the steric hindrance still exists.