Underweight is associated with periodontitis among Korean female adults

1Department of Biostatistics, College of Medicine, The Catholic University of Korea, Seoul, Republic of Korea

2Department of Periodontics, College of Medicine, The Catholic University of Korea, Seoul, Republic of Korea

Findings from the Korean National Health and Nutrition Examination Survey conducted between 2012 and 2014 were used for this study. Informed consent was obtained from all the participants. The Institutional Review Board of the Korea Centers for Disease Control approved the Korean National Health and Nutrition Examination Survey, and this study was performed based on the Helsinki Declaration-based ethical principles for medical research involving human subjects. The design of this study was approved by the Review Board at Seoul St Mary’s Hospital, the Catholic University of Korea (KC14EISI0636). 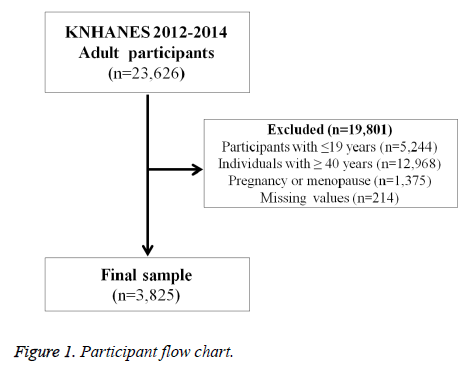 Measurement and classification of variables

Staff members with training performed anthropometric measurements for this study. Body mass index was measured by the following calculation: weight (kg) divided by squared height (m2). Measurement of waist circumference was done at the time of the end of normal expiration at the level midway between the costal margin and the iliac crest.

Metabolic syndrome was defined based on the American Heart Association/National Heart, Lung, and Blood Institute Scientific Statement criteria for Asians [9]. Three or more of the following must be fulfilled to be diagnosed with metabolic syndrome: use of lipid-lowering medication or fasting triglycerides ≥ 150 mg/dL; use of cholesterol-lowering medication or high-density lipoprotein cholesterol <40 mg/dL in men and <50 mg/dL in women; waist circumference ≥ 90 cm in men and ≥ 80 cm in women; use of antihypertensive medication or blood pressure ≥1 30/85 mm Hg; or current use of antidiabetic medication or fasting blood glucose ≥ 100 mg/dL.

The time of day of the participants’ tooth brushing was recorded, and the frequency of tooth brushing per day was calculated based on the interview. Self-reported oral status was categorized into three: favorable, average, and problematic. Dental checkup within a year was also evaluated. The presence of periodontitis was evaluated using the World Health Organization community periodontal index (CPI). Presence of periodontitis was defined if CPI score was ≥ 3 according to the previous report [10]. Dental checkup was also evaluated.

The data are presented as means ± standard errors for continuous variables and as proportions (standard errors) for categorical variables. A chi-square test for categorical variables or an independent t-test for continuous variables was performed to assess the differences in characteristics categorized by the presence of periodontitis. Sensitivity test was performed to evaluate the interactions of parameters with periodontitis. A multivariable logistic regression analysis was used to evaluate the odds ratios of periodontitis in relation to body mass index. Model 1 was adjusted for age, whereas Model 2 was adjusted for age, frequency of tooth brushing per day, self-reported oral status, waist circumference, and white blood cell count. In Model 3, adjustments were made for the variables in Model 2 plus smoking, drinking, and walking.

Table 1: Baseline characteristics of study participants according to presence of periodontitis. 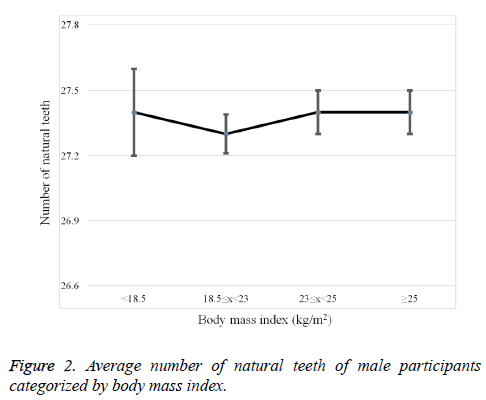 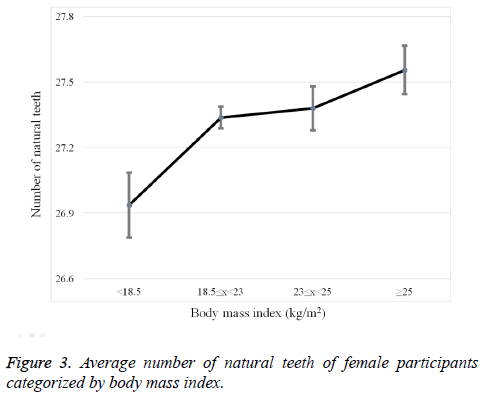 This study aimed to identify associations between underweight, determined by body mass index, and periodontal disease using nationally representative data. This study clearly showed that the females with body mass index lower than 18.5 had higher odds ratios of periodontitis.

To date, obesity has been considered a risk factor for health issues [11]. A previous report has shown that individuals with underweight, defined by body mass index, have a significantly increased risk of postsurgical complication compared to individuals with normal body mass index [12]. However, the association and the underlying mechanism between underweight and periodontal disease is not well known yet. Individuals with underweight may have a higher chance of inadequate consumption of food, and this may lead to malnutrition [13]. Underweight persons may have deficiency in essential amino acids and important vitamins [14]. Systemic inflammation has been suggested as being associated with malnutrition, and it has been shown that nutritional status is related to infection [15]. Similar to the association between underweight and systemic diseases, underweight may be served as a risk factor for periodontitis [16]. This study clearly showed the gender-specific association between underweight and periodontitis. It was shown that more than half of the females referred their ideal figure to be underweight and more females were underweight than males [17]. It was demonstrated that females tended to perceive themselves as overweight when they were not, failed to see themselves as underweight when they were underweight [18]. In a previous report, females diet more frequently and used laxatives as their weight-loss strategies and these may have affected the association [17].

The measurement of underweight and obesity may be evaluated by means of various methods including body mass index, waist circumference, waist to hip ratio, relative weight, percentage of body fat, and computed tomography [19]. This study used body mass index, which is considered one of the most commonly used ways to estimate whether a person is overweight and obese. It is used widely to measure population prevalence [20]. However, it should be noted that body mass index is also a widely criticized index [21]. A previous report has suggested that waist circumference may predict a greater variance in health risk than body mass index, and it was shown that obesity-related health risk could be explained by waist circumference and not by body mass index [22]. Previous reports identified the correlation between waist circumference, waist to hip ratio, and body mass index with cardiovascular disease risk, and it was shown that waist to hip ratio showed the strongest correlations [23]. Body fat percentage is calculated by the total mass of fat divided by total body mass, and body fat percentage may serve as better tool for determination of an individual’s health [24]. There may be differences between ethnic groups, and a previous study has shown that this may be due to differences in body build and energy balance [24]. Collectively, it cannot be concluded that one method serves all purposes. However, body mass index can be measured simply and inexpensively, and it can also be considered a useful and clinically important indicator for a large group of people [21].

This study can be considered as offering very well-organized and reliable data. First, data was collected by applying a rolling sampling design involving complex, stratified, and multistage probability samples [25]. Moreover, the interview and survey, along with periodontal examination, were performed by trained experts [26]. However, it should also be noted that the study is characterized by several limitations. The design of the study is cross-sectional, and the cause and effect relationship cannot be verified [27]. Some of the values, including smoking, drinking, exercise, and tooth brushing were obtained by interview, and there may be recall bias [28].

Conclusively, the association between underweight, defined by body mass index, and periodontitis was proven among Korean female adults by multiple logistic regression analyses after adjusting for confounding factors.

This research was supported by Basic Science Research Program through the National Research Foundation of Korea (NRF) funded by the Ministry of Science, Information and Communication Technology & Future Planning (2017R1A1A1A05001307).