Head and neck cancers are group of cancers found in the head and neck region, involving the respiratory tract and the digestive tract, interfering with the functions of eating and breathing. Head and neck cancers include malignant tumors found in the oral cavity, the oropharynx, naso-pharynx, and the larynx. In developing country like India the incidence and prevalence of head and neck malignan-cies has been raised with alarming rates and has become one of the leading death causes of malignancies suffering. In the head and neck malignancies generally there is pre-disposition with a common male: female ratio of 3:1. 75-80% of oral and laryngeal malignancy occurs among smokers and tobacco chewers.

Mucoproteins are type of conjugated proteins, widely dis-tributed in the body as constituents of cell membranes, connective tissue, basement membrane and ground sub-stance in intracellular spaces. The reference levels of se-rum mucoproteins are in very low concentrations [1], however various earlier studies have shown increased serum levels of mucoproteins in various cancers [2,3,4]. They have been correlated with the presence and extent of malignant diseases [5,6].

The present study was carried out in the most common type of malignancy, head and neck suffered by Indians. The study was designed to understand the significance of serum mucoproteins as diagnostic and prognostic bio-markers during metastasis and to observe the effect of radiations on its levels in radiotherapy undergone malig-nant patients. The serum mucoproteins were determined in selected head and neck malignant cases of early [I and II] and late stages [III and IV], before initiating radiother-apy and after one month of completion of radiotherapy.

The study was carried out in ninety-six (96), previously untreated clinically and histopathologically proven malig-nant cases of head and neck that attended the radiotherapy department of Krishna Hospital and Research Center Karad.The study results of malignant cases were com-pared by collecting venous blood and estimating serum mucoproteins from sixty-three (63) healthy volunteers of Karad city which served as healthy control group.

The patients were advised to take standard dose of radia-tions (60-65 Gy / 25-30 fractions/ 5-6 weeks) depending upon the stage of malignancy. The patients associated with diseases like Rheumatoid Arthritis, Tuberculosis, Gout, Pneumonia and Myocardial Infarction were ex-cluded from study.

The study results were statistically analyzed with the pro-gram of SPSS for window version 10.0.The results were expressed in Mean and S.D .The students ‘t’ test was ap-plied for statistical significance.

From ninety-six study cases of head and neck malignan-cies, eighty-four were from 45-60 years of age group where as twelve malignant patients were from 61-75 years of age group. In the studied head and neck malignant cases it was observed that the percentage of late stage sufferers (73.96%) were higher than the early stage suf-ferers (26.04%) (As depicted in Table 1 and graph 1). 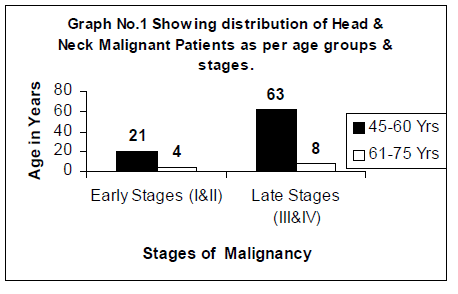 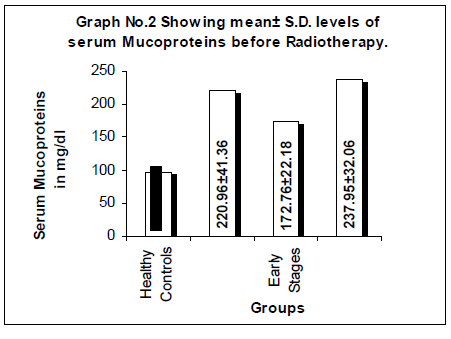 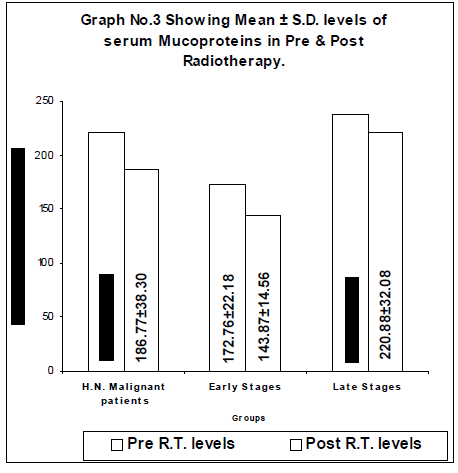 The head and neck malignant patients and healthy con-trols comprised in the present study were in the range of 45-75 years of age. Out of 96 malignant cases of head and neck 90% were males and only 10 % were females. The predominant number of male sufferers from head and neck malignancies indicates high risk caused due to the habits of smoking, alcoholism, eating tobacco and its products, more in males than females of India. The higher percentage of late stage sufferers may be due to illiteracy, ignorance and poverty which might have not brought the patients to hospitals for their early diagnosis and treat-ment.

The elevated levels of serum Mucoproteins in malignant patients showed high statistical significance of P< 0.001 when compared with healthy control values. The signifi-cant rise of serum Mucoprotein levels in head and neck malignancy may be due to the oxidative damage caused to the tissues by free radicals in oxidative stress condition, which in turn may be involved in the process like mutagenesis, carcinogenesis, cellular proliferation, de-polymerization of ground substance around tumor, which might have increased the local production and release of serum mucoproteins in serum. The cell membrane lipid-peroxidation, protein oxidation, cellular fragmentation, carbohydrate damage due to subsequent oxidative stress mechanisms may also increase the serum Mucoprotein levels.

The stages of disease had positive correlation with the serum levels of mucoproteins. The fall in mean serum mucoprotein levels following radiotherapy was correlated to clinical response. On treatment there is shrinkage of tumor by killing of tumor cells, which may stop the cell proliferation. This might be the reason of reduction in serum mucoprotein levels after completion of radical ra-diotherapy in head and neck malignant study cases. The standard radiation dose used during malignancy treatment had significant control on metastasis and signifies effec-tive mode of treatment.

All the study findings makes it clear that the marked ele-vations of serum Mucoproteins in different stages of head and neck malignancies are related to tumor bulk; as the tumor mass increases, the serum levels of mucoprotein also increase; showing a direct correlationship between the severity of the disease and serum mucoprotein as a biomarker. Serial estimations of serum mucoproteins during and after the course of radiotherapy might provide significant hints for the final outcome of the disease; thus proving radiotherapy a beneficial treatment strategy. The study results also showed that the fall in levels of serum mucoproteins after radiotherapy was significantly corre-lated to clinical response; hence this biochemical parame-ter can be used as a biomarker to monitor the progress of disease in combination with other tumor markers during radiotherapy of head and neck malignancies. The present study results are in concordant with the findings of earlier author studies of Joshi et al [8]; H.R Mali [9] and Pahwa .M.B et al [4].

In conclusion the estimations of serum mucoproteins in the laboratory before and after radiotherapy serves as a good diagnostic and prognostic biomarker. The present study has also helped us in understanding an effective and significant role of radiations in treatment of malignancies and levels of serum mucoproteins as a biomarker to show the response of treatment.

We acknowledge the vice chancellor of Krishna Institute of Medical Sciences University, Karad for providing the financial support to carry out this research work in the Department of Biochemistry in collaboration with Radio-therapy Department. We thank the doctors and technical staff of K.I.M.S Radiotherapy Department for their guid-ance and support throughout the research period.