Purpose: We evaluated accuracy and effect of ultrasound (US)-guided transcranial drilling and catheter drainage versus computed tomography (CT)-controlled interventions in the collagenase-induced intracerebral haemorrhage in rats.

Intracerebral hemorrhage (ICH) is a common and potentially disabling event worldwide. There is an approximate 50% mortality rate during the month following ICH [1]. High morbidity after ICH would impact the patients’ quality life for a long time. The understanding of cerebrovascular events during a brain hemorrhage is particularly important for the effective medications and treatments [2]. Computed tomography (CT) and magnetic resonance imaging (MRI) are well-established techniques that are used in clinical imaging investigations of hematoma area and development [3-5]. However, the techniques are too large to carry. Considering ultrasound is the most widely used technique for detecting hematoma in the early stage [6], our current study aimed to use ultrasound technique for the investigation of cerebrovascular events during a brain hemorrhage in a collagenase-induced ICH in rats. We want to find out one quicker and accurate treatment for early ICH, and simpler and more feasible examination for delay ICH.

Animals were housed and treated in accordance with Chinese national guidelines for the care of laboratory animals and was approved by the Animal Care and Use Committee of the Chinese Academy of Military Medical Science.

A total of 120 young male Sprague Dawley (SD) rats (Laboratory Animal Center, Academy of Military Medical Sciences, Beijing, China) were used in this study. Animals weighing 250-280 g, aged 4-7 months, were housed individually with a 12 h light/dark cycle and given access to food and water ad libitum in a temperature-controlled environment (20-22°C), randomly divided into four groups: group A, group N, group B and group C. The performance of all groups was listed as follows.

Group A, group B and group N underwent collagenase-induced ICH surgery procedure as animal model groups. The protocol of collagenase-induced ICH was modified based on an established method [7]. Briefly, animals were anesthetized with 10% chloral hydrate (0.4 mg/kg for induction and 0.02 mg/kg for maintenance) and placed into a head-holder. Maintained the body temperature at 37°C by a heating lamp to prevent hypothermia during the surgery. Blood pressure, electrocardiography (ECG), blood pH PCO2 and PO2 were monitored and maintained within normal physiological limits. Group A, group B and group N were infiltrated with 1% lidocaine at the scalp area, explored a midline scalp incision. A burr hole was drilled through the skull. The injection sites were 3 mm right to midline, 1 mm posterior to the anterior fontanelle, and 5 mm below the surface of the skull. Collagenase (IV; Sigma, America) dissolved in saline was infused over 2 min. After infusion, the hole was sealed with bone wax. The wound was sutured, and the animal was then transferred to machine lab for the first scanning after surgery. After evaluated of bleeding site and severity, group A underwent US-guided transcranial drilling and catheter drainage therapy. Group B underwent CT-controlled transcranial drilling and catheter drainage. Group A, group B and group N were evaluated the bleeding part and severity by ultrasound and CT. Group C received a 10 μl saline injection with the same surgical procedure as the control group.

The Bederson score was calculated as follows: Rat tail was lightly grasped 10 cm above the desktop, and the score was graded as the following: 0, no neurological deficit; 1, flexion of the contralateral wrist and elbow and flexion adduction of the contralateral shoulder; 2, signs in score 1 plus reduced resistances when pushing toward the paralyzed side; 3, circling toward the paralyzed side when acting (tail-chasing like) [8].

Hematoxylin and eosin staining (HE staining)

At 4 weeks after ICU, after deeply anesthetized and perfused with 4% paraformaldehyde, the remains were placed in supine position. Blood and cerebrospinal fluid samples were draw and stored in a cryostat at -80°C for the later surgery. The skull was opened, and the whole brain was dissected. After removing the cerebellum, the brain sample was placed into the same fixative solution and fixed for another 24 h, embedded in paraffin, and finally cut into 4 μm thickness serial sections. Hematoxylin and eosin stain in accordance with the general steps to complete.

Under the microscope (10 × 40), NF-kB +/caspase-3+ nuclei close to the hematoma were captured in 5 randomly selected sections from each animal by Olympus Microscope IX73, and analyzed by Image Analysis Software (Image J 1.29X).

Table 1: The behavioral tests of all groups. 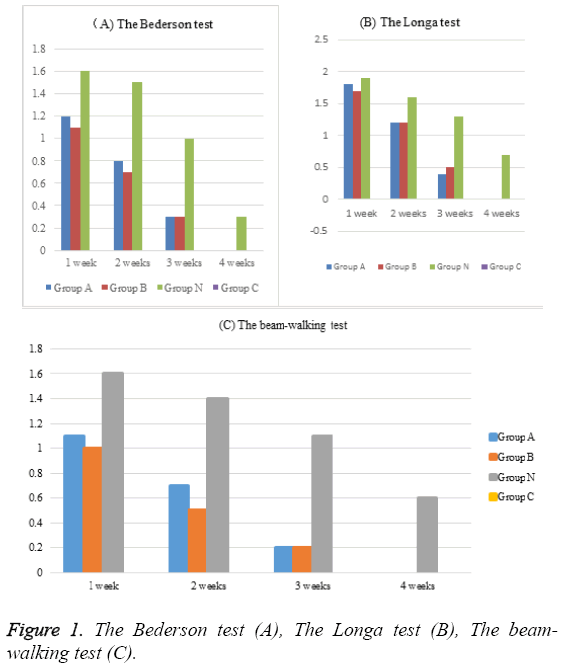 HE staining revealed that neuron cells near the needle track in group N were replaced by several sizes of cavities, glial cells and collagen fibers around the cavities formed glial scar (Figure 2A). HE staining revealed that a few neuron cells near the needle track in group A and B were hypertrophy and the branch were reduced (Figure 2B and Figure 2C). While in group C the neuron cells arranged in order and norm morph (Figure 2D). Immunohistochemistry revealed that NF-kB and Caspase-3 showed the most positive expression in group N, while that showed the numbers were reduced in group A and B. There was no NF-kB or Caspase-3 expressed in group C. 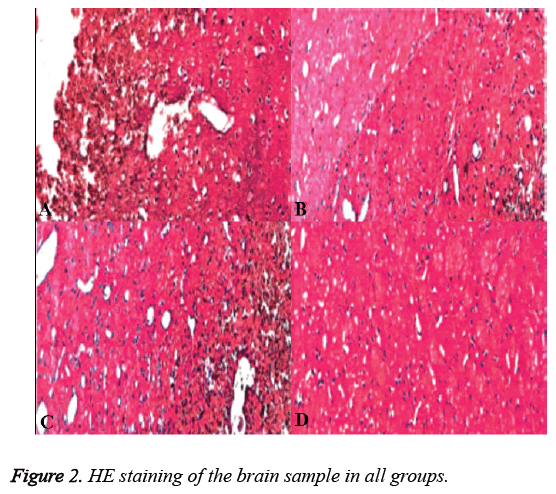 Figure 2: HE staining of the brain sample in all groups.

Table 2: The association between NF-kB and Caspase-3 of all groups.

Our study consisted on histological characterization and behavioral testing of our ICH model associated with the therapy of ICH up to 2 months. The results extended our knowledge of neuron cells changes during haemorrhage and pioneered a new technique in collagenase-induced ICH animal model [11,12]. ICH is the most commonly produced in rat by either infusing autologous blood or collagenase [13]. In this study, we chose collagenase IV to induce ICH for the obviously neurological deficit and a high persistence [14]. In our study, neurological deficit caused by hematoma were observed in group A, B and N, especially in group N. It could see that the behaviour tests of group N had higher scores and gentler downward trend compared to group A and B. Combined with results of HE staining and immunohistochemistry, it showed that ICH would cause the irreversible damage of brain tissue and neuronal apoptosis. The faster appropriate therapy is given, the better recover we get [15]. The mortality of group N was the highest in the animal model groups, as there was no any therapy for group N after ICH procedure. We compared the effect of US-guided and CTcontrolled transcranial drilling and catheter drainage on collagenase-induced ICH in rats, the mortality showed that there was no significant difference between group A and B. Ultrasound could be the new diagnostic and therapeutic technique and extend in the clinical application for ICH [16].

For further studying the brain damage of each group, we analysed the apoptosis of neuronal cells in each group. Many reports have proved that haemorrhage would induce delayed brain injury even when the haemorrhage was removed [17]. The apoptosis of neuronal cells was associated with the bleeding and persistence time of haemorrhage [18]. Previous reports suggested that the expression of NF-kB and caspase-3 were associated with the injury of granule cell [19,20]. NF-kB exists in cerebrovascular endothelial cells, neuronal cells and glial cells and would be activated by ischemia of the central nervous system [21]. It hypothesized that NF-kB involved in regulating gene transcription function, mediated Fas associated death domain protein (FADD), activated Caspase-3 and finally induced apoptosis [22,23]. Caspase-3 (named cysteine protease 32) which is one of the most important caspase, also belongs to interleukin-1-β convertase (ICE) family [24], is relevant to apoptosis of neuronal cells after intracerebral haemorrhage [25,26]. Caspase-3 plays an important role in protein hydrolysis as downstream effect enzyme and induces functional proteins cracking and apoptosis [27,28]. In this study we found that Caspase-3 and NF-kB had high expression near the hemorrhage even it had been removed for weeks. It implied that the injury would sustain after the therapy. While As the mechanism of delay injury is complicated, we would continue to study the mechanism and find a better way to reduce the delay injury, for improving the quality life of patients.