Purpose: The effect of the intercondylar osteotomy and location hole plugging on blood loss during Total Knee Arthroplasty (TKA) was investigated.

Material and Methods: A retrospective-controlled study was performed by including 304 cases of knee replacement in our hospital. The clinical data were recorded and blood loss was calculated. Theoretical blood loss was calculated at different times. The Gross equation was used in all original data. The cases were divided into two groups according to mode of intercondylar osteotomy. Meanwhile, three classifications were obtained on the basis of the mode location hole plugging. SPSS17.0 software was used for the analysis and comparison in different groups.

The effect of Total Knee Arthroplasty (TKA) surgery is definite in the treatment of severe knee osteoarthritis and other diseases [1]; joint pain can be relieved, and corresponding function can be rebuilt in about 90% of patients with severe knee osteoarthritis by TKA [2,3]. However, TKA is limited by many factors, such as blood loss, which is the most severe of all these factors. Some scholars estimated that the average amount of blood loss can reach 1471 m in the first replacement surgery [4]. Meanwhile, the risk of allogenic blood transfusion in perioperative period can be as high as 15%-62% because of blood loss [5,6]. The risk of allogeneic blood transfusion has the same rate [7-11]. If the amount of blood loss can be reduced to a minimum, the popularization of surgery will be greatly promoted.

Many scholars have been attempting to explore the influence of various factors on blood loss. The roles of these factors have been repeatedly demonstrated, and some have reached agreement. For example, several researchers studied the application of tourniquet in the early days and confirmed that tourniquet use can reduce the amount of bleeding in TKA [12-15]. In addition, a large number of clinical studies regarding the application of tranexamic acid are reported. Tranexamic acid reduces the amount of intraoperative bleeding without increasing the risk of DVT; therefore, this chemical can be regarded as a safe and effective measure in the perioperative period [16-18]. However, research on the reduction of perioperative blood loss in TKA remains lacking.

In this study, the clinical data from 304 patients that underwent TKA were studied in Nanfang Hospital of Southern Medical University were investigated. Gross equation was used for the calculation of postoperative blood loss. The patients were grouped according to mode of location hole plugging and intercondylar osteotomy. Differences in the amount of blood loss among the groups were obtained and analysed. Kruskal- Wallis test was performed on SPSS17.0 software. These two factors were found to have some impact on blood loss, which in turn contribute to the exploration of their influence on reducing the blood loss caused by surgery.

From January 2011 to June 2016, patients with final diagnosis of osteoarthritis and accepted TKA were included in the study. Patients with the following disease were excluded from the study: knee joint advanced diseases of Rheumatoid Arthritis (RA) and Ankylosing Spondylitis (AS), Kashin Beck disease, infection and sequelae of infection, cancer, severe cardiovascular and cerebrovascular diseases, liver diseases and severe liver dysfunction, blood system diseases such as coagulation disorders (such as hemophilia), thrombocytopenia, etc. In addition, patients with long-term use of anticoagulants were also excluded. For patients with hypertension, blood pressure should be reduced to 140/90 mmHg. Finally, 304 patients were included in the study, including 61 males and 243 females, aged from 42 to 80 y, with an average age of 56.8 y. The general data of 304 patients were shown in Table 1. The study was approved by the ethics committee of the hospital, and all the patients signed of the informed consent.

The indications of the operation for all patients included: pain or dysfunction caused by severe osteoarthritis of the knee, ineffective conservative treatment and influence in the daily life, joint space stenosis shown in X-ray plain film, cystic changes, osteosclerosis and osteophyte formation observed in the subchondral bone of the knee.

All surgical procedures were standardized (Median knee incision, and the incision length ranged from 10 to 15 cm) and performed by an experienced team in the supine position of the patient. Anesthesia was performed under general anesthesia or under spinal anesthesia. Postoperative cephalosporins were routinely administered for 24 h to prevent infection. Patients were not allowed to choose any weight or sex before the operation.

There were two kinds of intercondylar treatment before femoral prosthesis installation, osteotomy or non-osteotomy, which was determined by the type of prosthesis. Osteotomy was not selected before the operation, and it was completely randomized. The location holes used in femoral intramedullary fixation were processed in 3 different ways after the positioning was completed, one for no treatment, the second was that the cement (Polymethyl methacrylate) was packed into the location hole when the femoral prosthesis was installed during the operation, and the third was that the cancellous bone fragments after the osteotomy were tapered into the location holes, and the columns were tightened to fill the holes. Various processing methods were selected completely randomly and free of any other factors.

After the calculation of the total amount of blood loss on the 1st, 3rd, and 5th d after operation, two groups of intercondylar osteotomy group and non-intercondylar osteotomy group were divided according to the operation of intercondylar osteotomy, meanwhile, three groups of no plugging group, cement plugging group and bone plugging group were classified based on the plugging of the location hole. SPSS17.0 software was used to calculate the median and quartile values of each group according to the treatment of osteotomy (Table 2), box plot was then figured out (Figure 1), Kruskal-Wallis test was used to compare the differences between groups, and the significant difference between groups was obtained (Table 3); Furthermore, the median and quartile values were also measured by SPSS17.0 software in each group based on the plugging of the location hole (Table 4), and box plot was constructed (Figure 2), Kruskal-Wallis test compared the difference between groups, followed by the calculation of the significant difference between groups (Table 5). 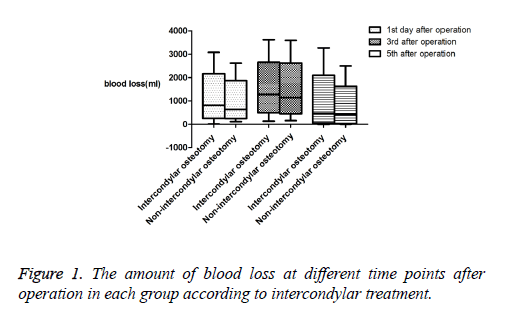 Figure 1: The amount of blood loss at different time points after operation in each group according to intercondylar treatment. 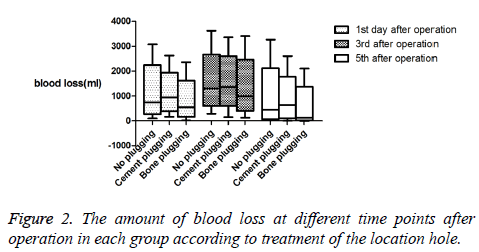 Figure 2: The amount of blood loss at different time points after operation in each group according to treatment of the location hole.

Table 2. The amount of blood loss in each group according to intercondylar osteotomy.

Table 3. Statistical differences of blood loss in each group according to intercondylar osteotomy (The value of 0.05 meant that the difference was statistically significant).

Table 4. Mean and standard deviation of blood loss in each group according to the plugging of the location hole.

Table 5. Statistical differences of blood loss in each group according to the plugging of the location hole (The value of 0.05 meant that the difference was statistically significant).

Blood loss after TKA is the most serious problem that hinders the progress of surgery. So far, this action has been widely recognised and became a common concern and has long been confirmed [20]. For the correction of preventive measures for blood loss reduction, various influencing factors of blood loss should be clarified in the perioperative period of TKA.

The effect of intramedullary and extramedullary localization on the amount of blood loss during operation and the influence of different location holes on blood loss after intramedullary positioning operation were not reported locally and abroad. At present, all kinds of existing femoral side manipulation tools are positioned intramedullary. During TKA, the incision of the skin, patellar bursa and turn of the patella should be performed 5 mm above the point of the cruciate ligament; the intramedullary fixation rod should be inserted into the femoral medullary cavity and the osteotomy of the distal femur, anterior condylar condyle, and anterior and posterior oblique planes should be performed sequentially. After the completion of osteotomy, the location hole had no other effect until the end of the operation. However, intraoperative positioning of the hole can be applied for hemostatic treatment through bone plugging or cement plugging. According to plugging condition, the location hole was subdivided into the no-plugging, cementplugging and bone-plugging groups. No other binding factors were involved in the three treatments such that instances of blood loss due to other causes were excluded.

A number of scholars, such as Woolson [22], compared blood loss volumes between cement and non-cement prosthesis replacement in TKA and in total hip arthroplasty. The results revealed that the blood loss of cement prosthesis was significantly smaller than that of the non-cement type. Bone cement seemed to play a role in hemostasis, although this role was not indicated by the results of this study. According to statistical difference, the amount of blood loss in this study had the following order: bone plugging group<no plugging group=bone plugging group. The rate of blood loss is not reduced after bone cement (polymethyl methacrylate) plugging at the location hole, and the reason for this condition remains unknown, although it might be correlated with the compatibility between bone cement and bone tissues [23]. After the plugging of cancellous bone to the location hole, cement was inserted into the surrounding cancellous bone for the formation of a compact protection that prevents the outflow of blood from the medullary cavity. By contrast, bone cement did not belong to autologous tissues that cannot be plugged in the location hole, and bone cement on the surface of hemorrhagic cancellous bone cannot play a sealing role similar to bone wax.

Non-osteotomy prosthesis was better than osteotomy prosthesis in TKA relative to blood loss, except in the third day after operation. The choice of the two prostheses can be comprehensively considered. The performance levels of location holes are indispensable in TKA, and bone plugging in the femoral location hole can result in the reduction of blood loss during surgery. No significant difference between cement plugging and bone plugging was observed with respect to their performance levels.