The reactions of a semirigid tripodal carboxylic ligand 3, 5-bi (4-Carboxyphenoxy)-Benzoic Acid (H3BCPBA) with Cd (NO3)2 and CuCl2 • 2H2O afford two novel coordination polymers, ((Cd3(BCPBA)2) (DMA))n (1) and [Cu2(HBCPBA)2(DMA)3]n (2) (DMA=N, N-dimethylacetamide), in which 1 shows a three-dimensional (3D) structure with a 5, 6, 6-connected net structure and 2 features a non-interpenetrating 3D networks with 1D small-size channels running along the a axis. In addition, anti-inflammatory properties of the synthesized compounds were evaluated in vivo utilizing a standard acute carrageenan-induced paw oedema method in rats.

Sympathetic Ophthalmia (SO) is currently thought to be an autoimmune inflammatory response toward ocular antigens, specifically a delayed hypersensitivity to melanin-containing structures from the outer segments of the photoreceptor layer of the retina [1,2]. The immune system, which normally is not exposed to ocular proteins, is introduced to the contents of the eye following traumatic injury. Once exposed, it senses these antigens as foreign, and begins attacking them. The onset of this process can be from days to years after the inciting traumatic event [3,4].

Because SO is so rarely encountered following eye injury, even when the injured eye is retained, the first choice of treatment may not be enucleation or evisceration, especially if there is a chance that the injured eye may regain some function [5]. Additionally, with current advanced surgical techniques, many eyes once considered nonviable now have a fair prognosis.

In recent years, much attention has been paid to synthesis and characterization of Metal-Organic Frameworks (MOF) based on carboxylate ligands because of their fascinating architectures as well as their potential applications in molecular recognition, magnetism, catalysis, optoelectronic devices, and so on [6-9]. In this work, two new Cd (II) coordination polymer (1) and Cu (II) coordination polymer (2) were solvothermally prepared by employment of a semi rigid tripodal carboxylic ligand H3BCPBA (Figure 1) and their antiinflammatory activities was then evaluated.

All the starting materials and reagents used in this work were obtained commercially and used without further purification. Element analyses (C, H and N) were determined with an elemental Vairo EL III analyser. Single-crystal X-ray diffraction data for compounds 1 and 2 was recorded on Mercury CCD diffractometer. The melting points were taken on a XT-4 micro melting apparatus, and the thermometer was uncorrected.

Synthesis and characterization of compounds 1 and 2

Structural measurement was performed on a computer-controlled Mercury CCD diffractometer with graphite-monochromated Mo-Kα radiation (λ=0.71073 Å) at T=293 K (2). Absorption correction was made using the SADABS program. The structure was solved using the direct method and refined by full-matrix least-squares methods on F2 by using the SHELXS-97 [10] program package. Crystallographic data and structural refinements for compounds 1 and 2 are summarized in Table 1.

Table 1. Crystal data and structure refinement for 1 and 2.

Anti-inflammatory activity screening for the prepared compounds was determined in vivo by the standard acute carrageenan-induced paw oedema method in rats. Wister albino rats of either sex (pregnant female animals were excluded) weighing 160-190 g were divided into 19 groups of six animals each. Paracetamol (reference standard) and the tested compounds (1, 2 and H3BCPBA) dissolved in DMSO, at a dose of 50 mg/kg body weight, were administered intraperitoneally, while the control group received DMSO, 1 hour before induction of inflammation. Carrageenan paw oedema was induced by subcutaneous injection of 1% solution of carrageenan in saline (0.1 ml/rat) into the right hind paw of rats. Paw volumes were measured volumetrically after 4 hours with a 7140 plethysmometer and compared with the initial hind paw volume of each rat for determining the oedema volume. Data were collected, checked and revised. Quantitative variables from normal distribution were expressed as means ± SE "standard error". The significant difference between groups was tested by using one-way ANOVA followed by Tukey HSD test at p<0.05. The anti-inflammatory activity was expressed as percentage inhibition of oedema volume in treated animals in comparison with the control group (Table 1): %Inhibition of oedema=(Vc-Vt) × 100/Vc, where, Vc and Vt are the volumes of oedema for the control and drug-treated animal groups.

Single-crystal X-ray diffraction analyses reveal that compound 1 crystallizes in the monoclinic space group P21/c, and features a 3D framework which is formed by 1D Cd (II) chains bridged by H2O molecules and carboxylic acid O atoms. As shown in Figure 2a, 1 consists of two crystallographically independent Cd2+ ions, one BCPBA3− ligand, two coordinated water in one asymmetry unit. Cd1 is six-coordinated with six O atoms from one coordinated water molecule and five carboxylic acid O atoms from five different BCPBA3− ligands; Cd2 is also sixconnected with two coordinated water molecules and four carboxylic acid O atoms from four different BCPBA3− ligands. Each Cd2 is connected with its crystalline symmetry ones via two bridged carboxylic acid O atoms, and further joined with Cd1 by one bridged water molecule to form the 1D SBU chain (Figure 2b). The three carboxylic acid groups on the deprotonated BCPBA3− ligand show three different coordination modes with monodentate, bidentate and tridentate chelating coordination modes to bridge one, two and three Cd ions, respectively. The distances of O and Cd bonds range from 2.250 (4) to 2.363 (4) Å. The deprotonated BCPBA3− ligands join the 1D SBU chains to give rise to a 3D framework with a small one-dimensional (1D) channel through such connection mode and the void volume calculated by PLATON is 6.5% (Figure 2c). A better insight into the nature of this intricate framework can be achieved by the application of a topological approach, reducing multidimensional structures to simple node and connection nets. Cd1 can be regarded as a six-connected node, Cd2 can be regarded as a five-connected node and the BCPBA3− ligand acts as a six-connected node, so the whole framework could be regarded as 3-nodal 5, 6, 6-connected net (Figure 2d).

The single-crystal X-ray analysis reveals that compound 2 crystallizes in the monoclinic space group P21/c and generates a 3D framework. There are two Cu (II) ions and two HBCPBA2- ligands in one asymmetric unit. Cu1 ion is fivecoordinated by five carboxylic O atoms from five different HBCPBA2- ligands, resulting in a tetragonal pyramid conformation; Cu2 ion adopts the same coordinating model with Cu1. Cu1, Cu2 and four carboxylic groups consist of the paddle-wheel binuclear cluster along the ab plane, which is further connected by the protonated carboxylic groups along the c axis (Figure 3a). The average Cu-O distance is 1.964 (2) Å, and the separation of Cu-Cu bond is 2.588 (2) Å. The HBCPBA2- ligand acts as a three-connected linker to join three Cu (II) paddle-wheel clusters using its five carboxylic O atoms (Figure 3b), such a connection model leads to a 3D framework with 1D small-sized channels running along the a axis (Figure 3c). From the topological point of view, each binuclear unit can be regarded as a six-connected node, the HBCPBA2- ligand can be simplified as a three-connected node, so the whole framework could be considered as a 3, 6-connected with the point symbol of (4.62) (42.610.83) (Figure 3d). 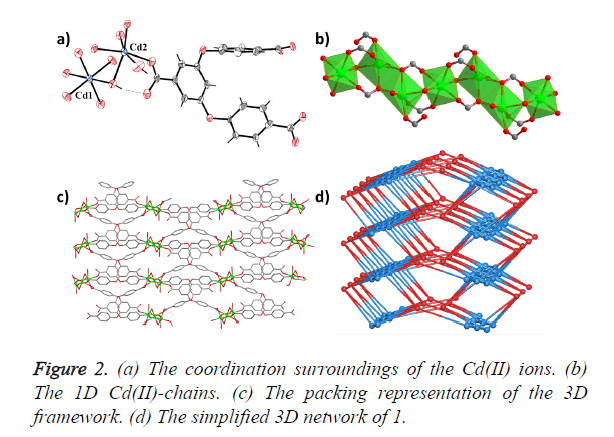 Figure 2. (a) The coordination surroundings of the Cd(II) ions. (b) The 1D Cd(II)-chains. (c) The packing representation of the 3D framework. (d) The simplified 3D network of 1. 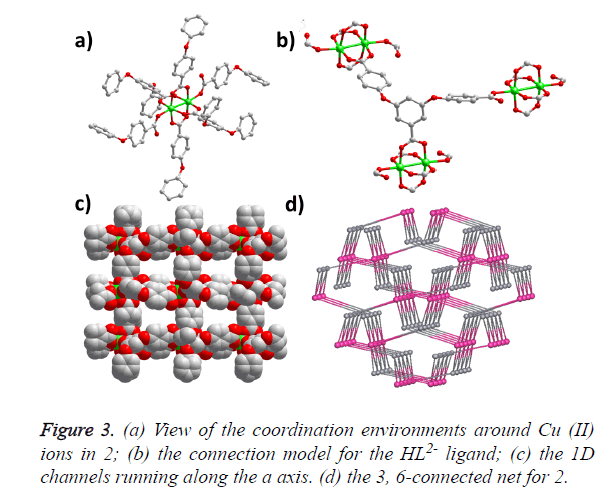 According to the above-mentioned data, it shall be concluded that compared with organic ligand H3BCPBA, the antiinflammatory activity of compounds 1 and 2 has been advanced greatly when H3BCPBA is in coordination with Cd and Cu ion respectively. However, additional studies are needed to define the mechanism underlying its anti-inflammatory activity and evaluate the correlations of its drug efficacy in vivo.