Objective: Our aim was to adapt for Turkish and perform the reliability study of The Patient Health Questionnaire-9 (PHQ-9).

Results: The questionnaire was administered to patients above 18 years presenting to Family Medicine clinic. Total of 96 patients (42 male 54 female, with an average age of 37.63 ± 11.66 years) took part in this study. Turkish version of the questionnaire was found to be quite reliable. (Cronbach’s alpha 0.842)

Conclusion: Turkish version of The Patient Health Questionnaire-9 is quite reliable. We believe that this questionnaire may be used for objective assessment of diagnosing depression, evaluating its severity and its follow-up in clinical practice.

Depression is one of the most common and treatable mental disorders. Within mental disorders, depression has been becoming more common in daily life and its prevalence has risen as a life energy consuming problem [1]. This increase in depression’s prevalence affects all the society due to economic and social casualties [2]. Depressive mood, lack of energy and loss of pleasure or attention are basic features of depression. Decreased concentration, lack of self-confidence, guilty feelings, pessimism, suicidal thoughts, sleeping disorders, loss of appetite and libido decrease are also common symptoms. Social and vocational functions deteriorate. For diagnosis of depression, according to DSM-IV (Diagnostic and Statistical Manual of Mental Disorders-IV) criteria, main criteria are loss of attention or loss of pleasure which affects the person’s all activities all day and almost every day and symptoms must be reported by the patient itself or patient’s depressive mood must be observed by others [3].

Our aim was to perform reliability study of The Patient Health Questionnaire-9’s Turkish version.

PHQ-9 is a measurement based on The Patient Health Questionnaire and questions 9 symptoms of depression according to DSM-IV criteria. It is about half the length of the other depression scales and has a reasonable sensitivity and specificity. Differential, the feature of PHQ-9 from other two staged depression scales which need additional questions when the score comes up high, is that diagnoses depression with these 9 questions and define its severity.

The questionnaire includes 9 questions and each question gets scored between 0 (not at all) and 3 (nearly every day). Points are summed up for every question. Points between 1-4 are rated as minimal, 5-9 mild, 10-14 moderate, 15-19 moderately severe and 20-27 severe depression according to the scoring system of the original questionnaire. Besides the nine diagnostic questions, the test includes one more question like “If you checked off any problems, how difficult have these problems made it for you to do your work, take care of things at home, or get along with other people?”. But this question doesn’t add up to scoring [5]. The questionnaire was administered to voluntary patients above 18 years presenting to periodic health examination in Eskisehir Osmangazi University Medical Practice and Research Hospital Family Medicine Clinic. Before the survey, the socio-demographic questionnaire was performed.

This study was conducted in the clinic of Eskisehir Osmangazi University Medical Practice and Research Hospital Family Medicine between 1 and 31 of July 2016. The questionnaire was administered to the voluntary patients above 18 years that presented to the clinic. Ethical approval was received from Eskisehir Osmangazi University non-interventional clinical studies ethical committee to carry out this study.

Total of 96 patients (42 male 54 female, an average age of 37.63 ± 11.66 years) took part in this study. The mean score was 8.84 ± 5.23. According to questionnaire results, 22 of patients had minimal, 40 mild, 21 moderate, 8 moderately severe, 5 severe depression. Cronbach’s alpha coefficient was calculated as 0.842 for 9 questions. When coefficient was calculated for each question separately, it was found to be minimum 0.813 and 0.838 at most. This outcome shows that Turkish version of the questionnaire is quite reliable. Distribution of Cronbach’s alpha values of questions was shown in Table 1.

PHQ-9 is a scale to diagnose depression by questioning 9 diagnosis criteria included in DSM-IV and to determine the severity of depression [5]. It is an important advantage that the questions are short and easily applied.

It is important to know depression and start treatment in primary care but most of the time efforts remain inadequate. It is also important to follow-up the response to treatment but it is shown in many studies that this follow-up is insufficient due to mistakes the physicians make while appointing drug incompatibility, increasing anti-depressant dosage, changing drug therapy or adding psychotherapy when necessary [7,8]. The physician can evaluate depression and its severity according to DSM-IV thanks to this easily applied questionnaire.

This study shows that the Turkish version of The Patient Health Questionnaire-9 is quite reliable. We believe that this questionnaire may be used for objective assessment of diagnosing depression, evaluating its severity and its follow-up in clinical practice. 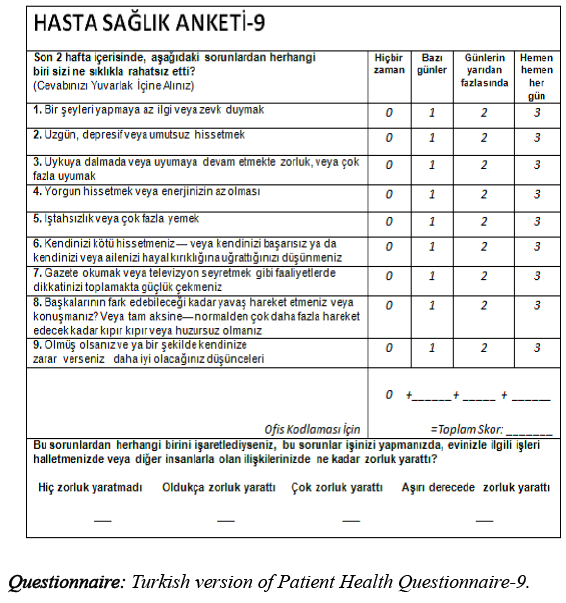