According to American Cancer Society, breast cancer is the most commonly occurring disease in women leading to higher mortality rate [1]. Tumours are of two types namely benign and malignant [2]. Benign tumours are non-cancerous and do not need treatment. However, malignant tumours are cancerous and need immediate attention failing which, it may be fatal [3,4]. Of the various diagnostic techniques, mammography is the most widely used reliable technique for malignant tumour detection. These mammographs are sending to expert radiologist for interpretation. The major task is to isolate the tumour region from the background. However low contrast in mammograph pose a serious problem to the radiologist for extracting the tumour region. In recent years, computer aided analysis tools are developed for enhancing the contrast and segmenting the affected region from the background. Though various techniques are citied in the literature, detection of tumour to its true size and complete removal of undesirable regions is still under active research. In this paper, an efficient tumour detection technique is proposed using Deep Neural Network (DNN). Singh et al. developed a technique to detect the breast cancer using both unsupervised and supervised learning techniques of ANNs with higher accuracies. The proposed technique classifies the well renowned Wisconsin Breast Cancer Database (WDBC) which was available in UCI repository. Radius, perimeter, texture, area, smoothness, compactness, concavity, concave points, symmetry and fractal dimension have been given as input parameters to the network and was trained using both supervised and unsupervised learning algorithm.

In unsupervised learning algorithm, SOM, SOFM, CPN, ART and LVQ are used to train the network and in supervised learning algorithm BPN, SCG and Bayesian Regularization are implemented to train the network. On implementing Bayesian Regularization technique 100% of accuracy was achieved [5]. Raad et al. proposed a classification technique to distinguish between classes of breast cancer using neural network approach based on Wisconsin Diagnostic and Prognostic Breast Cancer datasets (WDPBC). A neural network model of Multi-layer perceptron MLP was used for feature selection and the radial basis function RBF to classify the different types of breast cancer classification. Nine features are extracted to represent the input layer to the neural network. The network will classify the input features into two classes of cancer type, benign and malignant. On implementing these techniques 97% of accuracy was achieved [6].

Fatima et al. proposed an Adaptive Neuro-Fuzzy Inference System (ANFIS), to diagnose breast cancer. Neural networks and fuzzy logic are two approaches that are widely used to solve classification and pattern recognition problems. Hybrid learning algorithm was implemented for training the network where in forward pass the parameters are identified by the least square means method and the parameters of the backward pass are identified by the gradient descent method. Various attributes like clump thickness, uniformity in cell and shape, mitosis are chosen and implemented in fuzzy logic. It interprets their results using the knowledge base and rule list available. ANFIS mostly work on the idea of the fuzzy inference system, but it can be significantly differentiated by the design of the back propagation algorithm used to minimize the errors. This technique was tested using Wisconsin Breast Cancer Database (WBCD) data set and the accuracy of 98.25% was achieved [7].

Addeh et al. proposed a novel hybrid intelligent method for the detection and recognition of lesions. There are three processes in this technique. They are feature extraction, a classifier and an optimization module respectively. In feature extraction module, fuzzy features are set as the efficient characteristics of the pattern by implementing FCM algorithm. In classifier module, SVMs with hyper parameters for recognition accuracy is implemented. In optimization module, Bees Algorithm (BA) is implemented for choosing the required parameters from the classifier. The proposed method is a combination of the fuzzy self-organising layer which is in cascade with the Optimized Support Vector Machine (OSVM) that is collectively named as the fuzzy clustering optimised SVM (FCOSVM). The self organising layer is responsible for the clustering of input data and the OSVM is employed for the final classification of the tumour. The proposed method increases the accuracy to 97.34% by using the fuzzy feature as the SVMs inputs [8]. Medjahed et al. developed a technique using neural network for diagnosing breast cancer. K- nearest neighbours (K-NN) supervised learning algorithm.

The efficiency of the technique depends on the distance and the value of the parameter ‘K’. The technique was analysed for various distance and K value by using several rules of classification. These rules are used to decide the classification process. The proposed technique was trained and tested using Wisconsin Breast Cancer Database (WBCD) [9]. Saad et al. proposed a comparative study of various MLP activation functions for detection and classification problems. This paper investigates the activation functions in MLP networks and the selection of activation plays a vital role on the network performance. MLP network are trained using Back Propagation learning algorithm and the efficiency of the network was analysed based on the classification. The accuracy of the MLP network was due to implementation of hyperbolic tangent function [10].

Chen et al. proposed an early detection method using swarm intelligence technique based Particle Support Vector Machine Classifier (PSO_SVM). In the proposed technique, the weighted function was selected to design the objective function of PSO, Accuracy, number of support vectors and designated features simultaneously. Here, time varying acceleration coefficients (TVAC) and inertia weight (TVIW) are employed to efficiently control the local and global search in PSO algorithm. The proposed technique was trained and tested using Wisconsin Breast Cancer Database (WBCD) and it resulted in 99.3% accuracy when compared with gird search method. Though neural network is used for extensive classifications, attempts are not made for using neural network as a segmentation technique [11-14]. In this paper, Deep Neural Network (DNN) is used for effective isolation of tumour region from the mammographs [15-17].

The original image is converted to gray level image. In order to extract the details from the gray level image, Bottom-hat and Top-hat filters are implemented. Top hat filer determines the Whereas bottom hap filter obtains the difference between the morphologically closed and original images. When there is uneven contract in the image it is difficult to extract the features which has less variation in the intensity. So, Top-hat filters are implemented to extract the fine details from the gray level image. Similarly, Bottom-hat filters are implemented to extract the gradients at the high intensity pixels. Further the image is subtracted to enhance the contrast difference of image and its complemented to convert the Region Of Interest (ROI). The image is then segmented into regions and the ROIs represent the suspicious area which is analyzed further for the presence of cancer. On detecting the region using Edge detection process, Hough Transform is performed for gradient feature extraction. It is a technique to isolate the curves of given shapes in the processed image. Further, Generalized Hough Transform is implemented to detect arbitrary shapes. Complete specification of the exact shape of the target object. The information extracted is Location, Size, Orientation, Number of occurrences of that particular shape. On extracting the features, it is trained using feed forward Deep Neural Network [18]. The classifier runs automatically to the next Region of Interest’s (ROI) when the pixels do not match the criterion of true positives and false positives. This improves the accuracy, sensitivity and specificity of detection with the speed specific limitations of the neural networks designed. Steps involved in the proposed technique for tumour isolation from the mammographs are shown in the Figure 1. In this work, a set of 40 mammographs are collected from web sources with 20 each for benign and 20 malignant tumours [19-38]. Figures 2-6 show the resultant images from the initial and final segmentation processes. Original image, Gray scale, Bottomhat and Top-hat enhanced images, Difference and complemented images for five different mammographs are shown in Figure 2. By comparing the second and fifth columns of Figure 2, the difference between the enhanced images has higher contrast when compared to the original images. Morphological operators are used to superimpose the minima on the complemented mammograph. Watershed segmentation is performed on the imposed minima mammograph to isolate the tumour region. These images are shown in Figure 3. From the columns of four and five of Figure 3, it is found that tumour region is approximately identified using watershed segmentation. On the segmented images, Hough transform is used for extracting the known geometrical Figure 3. A set of parameters as shown in Table 1, is used for training the DNN to extract the tumour region to its true size from the Hough transformed output images as shown in Figure 4. From the fourth column of Figure 4, it is found that the tumour region is accurately extracted to its true size. 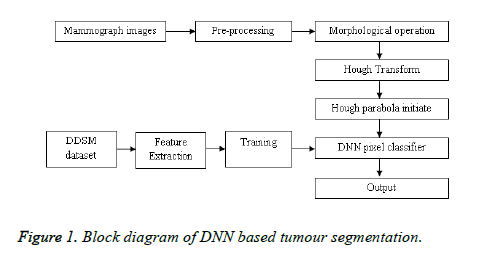 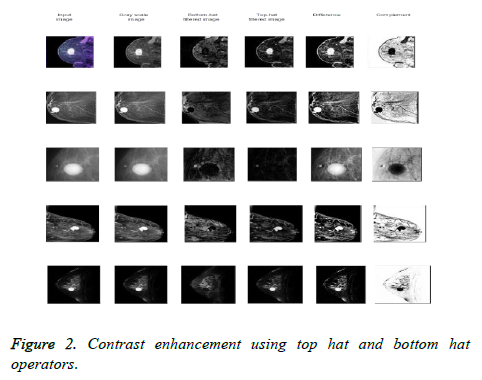 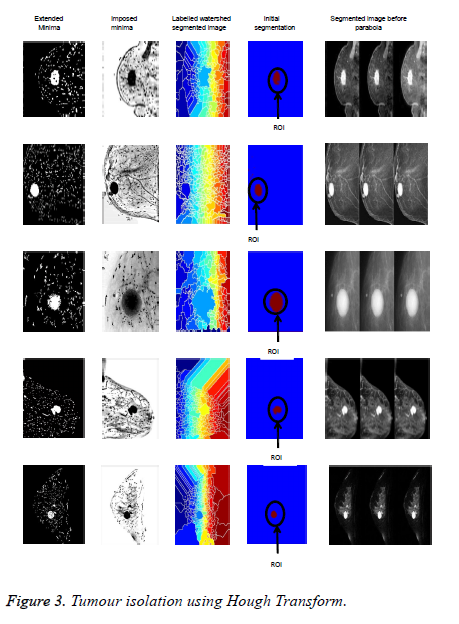 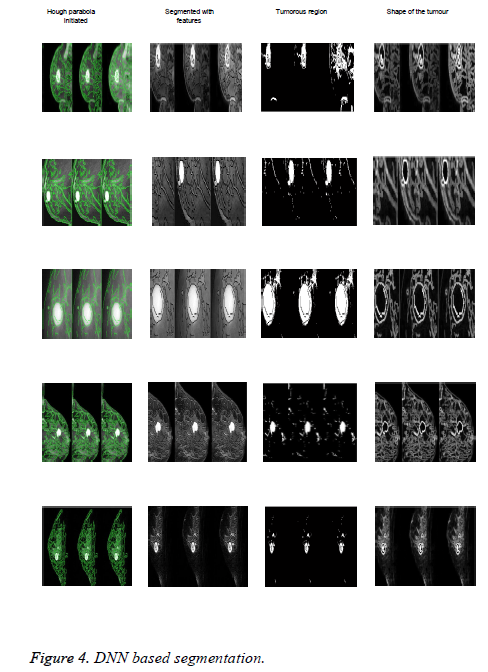 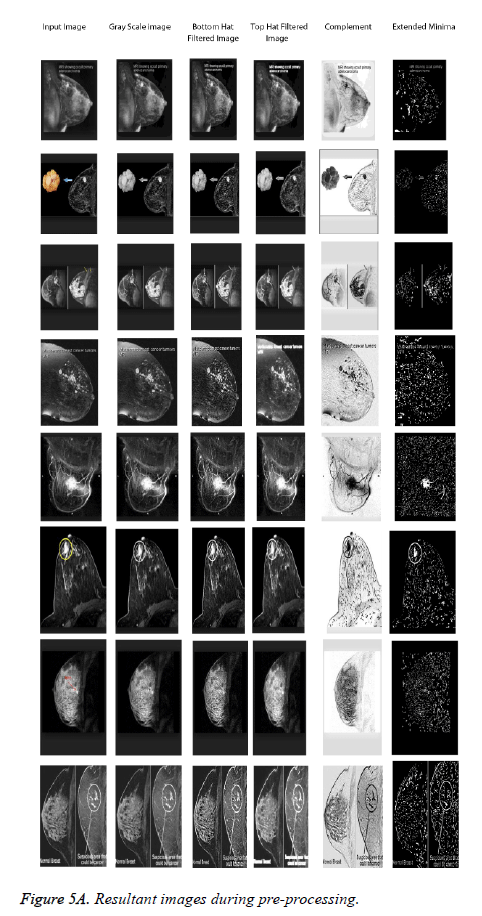 Figure 5A. Resultant images during pre-processing.

Figure 5B. Resultant images during pre-processing.

In this work, an efficient image segmentation technique by combining image processing and soft computing technique is proposed for low contrast digital mammographs. Three Levels of segmentations are performed to highlight the tumour region, isolate the objects of known geometry and extracting the true size of the tumour respectively. Undesirable regions are removed completely and the actual size of the tumour region is preserved. However the performance of the segmentation technique can be further improved if the features used for training the DNN are optimized. Also, accuracy of the results can be improved if a novel image enhancement technique is used instead of morphological operators.