Tryptophan and the kynurenine pathway in haemodialysis and peritoneal dialysis

End stage renal disease (ESRD) is characterized by accumulation of uraemic toxins as a result of inadequate clearance by the failing kidneys. These so-called uraemic toxins have the potential to negatively influence the individual. Many symptoms of ESRD, such as skeletal abnormalities, pruritus, neurological abnormalities, temperature disturbances, vomiting, immunological disturbances, anaemia, cardiovascular problems and increases in the formation of reactive oxidative species have been ascribed, at least partially, to an excess of one or more of these substances [1]. At least 90 substances have been identified by the European Uraemic Toxin Work Group as uraemic toxins [2]. In ESRD patients on renal replacement therapies such as haemodialysis and peritoneal dialysis these molecules are removed at different rates, not only depending on their molecular weights and the characteristics of the dialysis membranes, but also on the length of the dialysis sessions.

In addition to the accumulation of many substances in the blood of ESRD patients on renal replacement therapies, these patients also often suffer from malnutrition [3,4,5,6]. Reports on the frequency of malnutrition at different dialysis centres vary, probably due to the differences in the populations and the type of dialysis, but possibly also as a result of the way malnutrition is assessed. Depending on the studies between 18 and 50 percent of patients on peritoneal dialysis and between 23 and 76 percent of haemodialysis patients are reported to suffer from malnutrition [3,7,8,9,10]. Malnutrition is, however, not limited to dialysis patients but often also occurs in the pre-dialysis stages [11]. Estimation of nutritional status has always been, and still is problematic. Many different types of assessments ranging from the physical characteristics of the individual, to bio-electrical assessments, to a variety of biochemical markers, have been used. However, albumin level, although not ideal, remains the most commonly used indicator of malnutrition [3,12]. The malnutrition of chronic renal failure patients is generally thought to be multifactorial and factors known to contribute include low protein-energy intake due to prescribed diets, uraemia-suppressed appetites, metabolic acidosis, endocrine disturbances, loss during the dialysis process and others [3,13]. Another contributing factor to the low albumin in the blood of ESRD patients, and probably that of other nutritional factors, especially in patients on dialysis, is pro-inflammatory activity [14,15,16]. It is highly likely that the pro-inflammatory condition in ESRD patients, especially those on haemodialysis and peritoneal dialysis, may contribute not only to the state of malnutrition, but also to the accumulation of uraemic toxins as will be discussed later.

There are indications that ESRD patients on dialysis are tryptophan depleted [23] and that an accumulation of kynurenine pathway metabolites, such as quinolinic acid, may contribute to certain uraemic symptoms such as anaemia [24], certain neurological disturbances and increased vulnerability to infections [21,25]. A need exists to simultaneously determine the levels of tryptophan and metabolites of the kynurenine pathway and to compare the effects of the two major treatment modalities, i.e. haemodialysis and peritoneal dialysis, on their levels.

The aim of this study was to simultaneously measure tryptophan and kynurenine pathway metabolites and to compare the levels found in haemodialysis to that of peritoneal dialysis patients.

Collection and processing of samples

Blood samples were collected from the patients and controls using a standard protocol for all subjects. Samples were collected in potassium EDTA, BD Vacutainer K2E 7.2mg, 4ml vacuum purple top tubes. This was done by venous puncturing of the antecubital vein in the controls and the peritoneal dialysis group. Blood from haemodialysis patients was collected at the initiation of dialysis, from the arterial line, and with a transmembrane pressure set at 0mmHg to prevent ultrafiltration influencing the levels of the substances to be analysed. Care was taken not to dilute the blood by the priming saline. Blood from peritoneal dialysis patients was collected before initiation of dialysis. All blood specimens, collected for the analysis of tryptophan and tryptophan metabolites, were collected after an overnight fast; immediately placed on ice before transportation for processing and storage. Samples for each of the study groups were collected during the same time frame thereby eliminating circadian differences between the different samples. The samples were centrifuged at 3000 revolutions per minute at 4 degrees Celsius for ten minutes. The resulting plasma was distributed and stored in aliquots of 0.5 ml each. The samples were stored at -700C until analysis.

The three analytes, i.e. tryptophan, kynurenine and quinolinic acid, were quantified by a gas chromatography – mass spectrometry (GC-MS) method that was developed and validated in our laboratory. Briefly the GC-MS system consisted of a Hewlett-Packard HP5900 gas chromatograph coupled to an HP 5970 quadrupole massselective detector. A negative chemical ionisation source was used to detect the three analytes derivatized with pentafluro propionic anhydride (PFPA) and pentafluro propanol (PFP). Separation of analytes was achieved on a 30m DB-5-MS capillary GC column with a diameter of 250.0 μm and a film thickness 0.10 μm. The GC oven was temperature programmed to start at an initial temperature of 800C for 2 minutes, ramped at a rate of 200C to 2100C and held at 2100C for 1 minute. The final ramp was at a rate of 300C to 3000C and held at 3000C for 2 minutes. The chromatographic run time for a single analysis was 12.5 minutes using helium carrier gas with a flow rate of 2.5 ml/min. The mass spectrometer was operated in selective ion monitoring mode and the highest abundant ions for each analyte were used for quantification.

Results of the volunteer control group, haemodialysis patient group and peritoneal dialysis patient group were compared by using Kruskal-Wallis one way analysis of variance testing and multiple comparison testing. The two patient groups were compared with each other using Mann-Whitney tests. Statistical inference for the analysis was performed using correction for non-parametric distribution of data with P values of less than 0.05 considered as statistically significant. 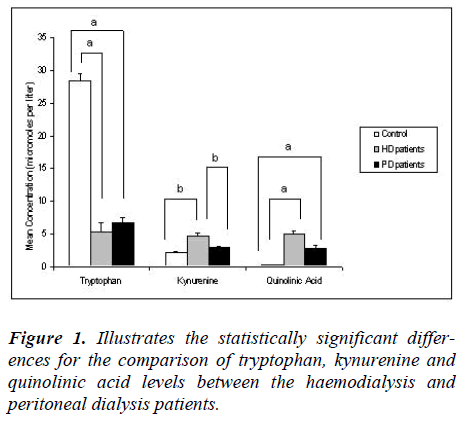 Figure 1: Illustrates the statistically significant differences for the comparison of tryptophan, kynurenine and quinolinic acid levels between the haemodialysis and peritoneal dialysis patients.

This study simultaneously examined the levels of tryptophan, kynurenine and quinolinic acid in 15 haemodialysis and 15 peritoneal dialysis patients by the use of a newly developed and validated GC-MS technique. The patient groups were similar with respect to age, time they have been on renal replacement treatment, and with regard to uraemia as reflected by urea levels (urea: HD 27.7 ± 7.32 μM versus PD 25.2 ± 11.1 μM; p=0.38). Both patient groups had albumin levels below our laboratory reference range (HD 33.1 ± 2.8 versus PD 30.6 ± 5.4 g/L; p=0.23; reference range 34-48 g/L).

The results of our study compared relatively closely to a few other studies regarding the control and haemodialysis patient groups whereby different analytical methods were employed. A discussion on the most comparable studies is presented here. The possible reasons for the differences in patients’ tryptophan and metabolite levels will be explained in more detail in section 4.4.

During peritoneal dialysis clearance of uraemic toxins and other unwanted substances occurs across the patient’s own peritoneal membranes as in contrast to haemodialysis where uraemic toxins filter across the membranes of the artificial kidney which in our patient group consisted of hollow fibre regenerated cellulose membranes. The results our peritoneal dialysis patients were similar to that found in haemodialysis patients of other groups, i.e., a 4.2 fold decrease in tryptophan, a 1.4 fold increase in kynurenine and a 9.3 fold increase in quinolinic acid.

The decreases of nutritional substances in the blood of ESRD patients are probably multifactorial. Renal failure patients are known to have alterations to their protein intake, both as a result of a decrease in appetite and as a result of certain dietary restrictions imposed by their therapy [31]. Albumin, although not a good indicator of protein intake in renal failure patients, remains a fair indicator of nutritional status. In this study albumin was found to be below normal in 53.3 % and 67.7% of the haemodialysis and peritoneal dialysis groups, respectively. There was no significant difference between the albumin levels of the haemodialysis and peritoneal dialysis groups (p=0.2339), neither could any significant difference be seen between the tryptophan levels of the two patient groups investigated. Dietary causes can thus, with a fair amount of certainty, be assumed to be a contributor to the albumin, as well as to the tryptophan depletion, seen in this study. However, there is a real possibility that proinflammatory activity could have contributed to the tryptophan depletion, as well as to the excessive production of the metabolites of the kynurenine pathway. The reason for this is that an increase in the pro-inflammatory activity causes an induction of the enzyme IDO that is in turn responsible for the conversion of tryptophan to kynurenine [22,32]. There are many factors that could potentially contribute to increased pro-inflammatory activity in endstage renal failure patients – especially those on renal replacement therapies. It is, for instance, acknowledged that the haemodialysis procedure itself, partially as a result of the use of bio-incompatible membranes, and the high endotoxin levels could result in immune activation and release of pro-inflammatory cytokines [33,34]. Proinflammatory conditions may also contribute to a lowering of plasma albumin by suppressing albumin synthesis [14] and leading to the movement of albumin from the blood into the interstitial compartment. Sufficient evidence exists to believe that end-stage renal failure patients on renal replacement therapies indeed have enhanced immune activation [16]. For instance, increased neopterin levels were found in long-term haemodialysis patients; serum C-reactive-protein (CRP) and pro-inflammatory cytokine levels were reported to be higher in haemodialysis patients and neopterin was found to be high in chronic renal failure patients [35,36,37].

In this study the possibility that immune activity, known to stimulate a shift in the tryptophan metabolic pathways, could have been present was examined by looking at Creactive protein (CRP) levels in the patient groups. The normal reference range for the CRP laboratory test is 0 to 10 mg/L. Seven haemodialysis and seven peritoneal dialysis patients had CRP levels above 10 mg/L. This needs to be further investigated. It has to be stressed that previous studies were done in first world countries and that the majority of the patients in our study were from a tertiary academic hospital and thus from the previously disadvantaged populations in South Africa. Malnutrition and infections could therefore have been more prevalent. Both tryptophan depletion and kynurenine metabolite accumulation can have negative consequences for patients.

This study was confined to one dialysis centre. These results should be confirmed by a multi-centre study where not only tryptophan and its metabolites are measured, but where the nutritional and pro-inflammatory status of all individual ESRD patients are assessed beyond albumin and CRP levels. Although the sample size of this study was relatively small, the typical tryptophan metabolic profile could be seen in the patient groups. This should however be warranted with future studies involving larger study populations.

The results of this study supported that of the small number of other studies that showed depletion of tryptophan and accumulation of kynurenine and quinolinic acid in the blood of haemodialysis patients. Tryptophan depletion in the present study was however much more pronounced. The levels in ESRD were similar in haemodialysis and peritoneal dialysis, except for lower kynurenine levels in the peritoneal dialysis group. Malnutrition and a higher infection rate on the African Continent could have contributed to the magnitude of tryptophan depletion, and perhaps a greater shift towards kynurenine and quinolinic acid as seen in this study.