Triple-port laparoscopic right hemicolectomy for malignancy: A feasible technique with the principles of complete mesocolic excision.

The technology of triple-ports laparoscopic surgery (TPLS) has been rarely reported on treating cancer malignancy in right hemicolectomy. TPLS is advanced in less incisions, less operators, less postoperative pain, a better cosmetic result with lower total costs, comparing to conventional laparoscopic surgery (CLS), which requires 4-6 ports. Here, we demonstrate the TPLS treatment on a male patient with a mass at hepatic flexure, and follow to discuss whether the surgery of TPLS on cancer of right hemicolectomy could be performed rigorously through complete mesocolic excision (CME). In addition, we discuss the possibility of TPLS a transition approach to more advanced Single port laparoscopic surgery (SPLS).

Laparoscopic colectomy for colon cancer has been prevalent worldwide and become increasingly important in the treatment of colorectal cancer (CRC) recent years [1]. Conventional laparoscopic surgery (CLS) on CRC usually requires 4-6 small incisions for ports. These incisions are not only cosmetically unappealing, but also increase the wound pain and potential wound morbidity, such as abdominal wall bleeding, port-site hernia, and internal organ damage. Moreover, 4-6 ports of CLS require at least 2 surgeons and 1 camera operator to perform surgery in right hemicolectomy. Single port laparoscopic surgery (SPLS) that requires less incisions, less operators, lower total costs, less postoperative pain with better cosmetic results, is believed to be an advanced alternative to CLS [2]. However, SPLS poses several challenges, such as the handling of straight instruments in parallel with the laparoscope through a small single incision. SPLS surgery is more strenuous than CLS one. The treatment conditions generated in SPLS inevitably results in motion limitations and clashing of surgical instruments due to limited incision space. Furthermore, SPLS significantly increases the difficulty of colonic exposure and dissection process due to hardness of triangular dissection [2]. Triple-ports laparoscopic surgery (TPLS), which only requires 3 ports, operated by 1 surgeon and 1 camera operator, has been rarely reported in right hemicolectomy for malignancy [3]. Kim, et al. reported that traditional laparoscopic colorectal resections can be performed effectively using a three-port technique [3]. The research of Joong-Min Park et al. has shown that threeport laparoscopy-assisted colectomy for colorectal cancer is feasible and safe by using external traction with suspension suture [2,4] The study of Anwar [5]. has revealed that three ports laparoscopy assisted colorectal surgeries seems to be safe, effective and has cosmetic advantages [5]. However, there is no research shown that D3 lymphadectomy and skeletonization of the superior mesenteric vein (SMV) and superior mesenteric artery (SMA) could be performed in TPLS right hemicolectomy procedure without external traction with suspension suture in treating carcinoma. Fewer ports represent lower total costs, less postoperative pain and less surgeons. In this case report, we demonstrate a preliminary study of right hemicolectomy by using TPLS. The aim of our study was to examine his technique in clear colonic exposure and complete mesocolic excision (CME), as well as to analyze the radicality, safety and feasibility of TPLS without extra traction.

This patient was a 64-year-old male, who developed symptoms of reclusion and distension at upper abdomen. His body mass index (BMI) was 24.17. A proliferative mass was found at hepatic flexure by colonoscopy. The patient was diagnosed with moderately differentiated adenocarcinoma by pathological examination of the biopsy. The computed axial tomography (CT) with IV contrast showed a mass with 5.0 cm maximum axial dimension at hepatic flexure which was consistent to its colonoscopy (Figure 1a and 1b). There was no family history and congenital abnormality. The patient’s blood biochemical and routine test were normal, as well as his cardio-pulmonary function.

Before the surgery, the patient received a standard mechanical bowel preparation and an antibiotic prophylaxis consisting of gentamicin and metronidazole. During the operation, he was placed in straddle-type supine position and 12 mmHg carbon dioxide (CO2) pneumoperitoneum (flow 20 L/min) was maintained throughout (for an estimated time of 120 min to 180 min). Three ports were used to gain access. The configuration was shown in (Figure 2a and 2b). An infraumbilical incision was made for the 30° laparoscopic camera, and the first 12 mm trocar was inserted. The other two operator’s ports using 12 mm and 5 mm trocars were placed across from the lesion as shown in the configuratinon. The harmonic scalpel was introduced as an energy source and dissecting instrument through the second 12 mm port in the left upper quadrant. The 5 mm port in the left lower quadrant was mainly used for atraumatic grasper. 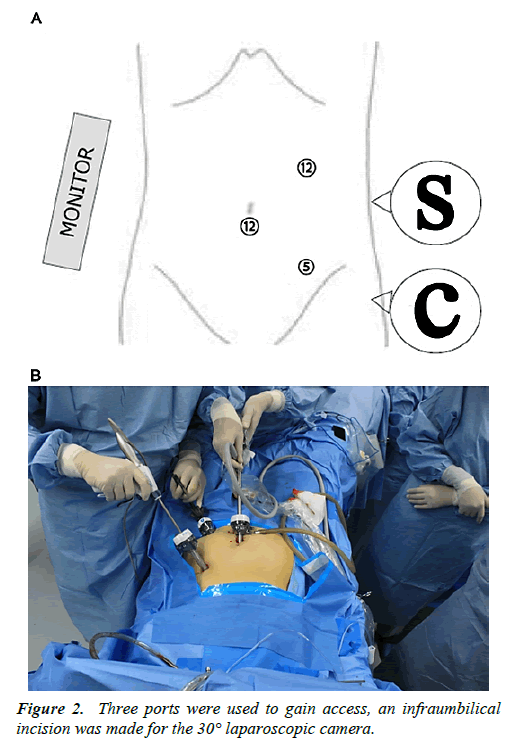 Figure 2: Three ports were used to gain access, an infraumbilical incision was made for the 30° laparoscopic camera.

After initial laparoscopic exploration was performed, the patient was tilted 30 degrees to the left. A medial-to-lateral approach was adapted to perform the mobilization of the right colon and D3 lymphadectomy. One of the major difficulties in this method was in order to achieve efficient skeletonization of SMV, SMA and their branches, the surgeon had to do the operation barely by two hands. The lateral retraction of the mesocolon, and each vessel controlled by atraumatic grasper on the left hand resulting in a “tenting” effect, was the key step to expose the surgical field. Lymphous and adipic tissues along the SMV and SMA were dissected by Harmonic scalpel on the right hand. Then the main trunk of SMV and SMA were skeletonized, and their branches (ileocolic vessels, right colic vessels, and right colic vessels) were dissected (Figure 3). 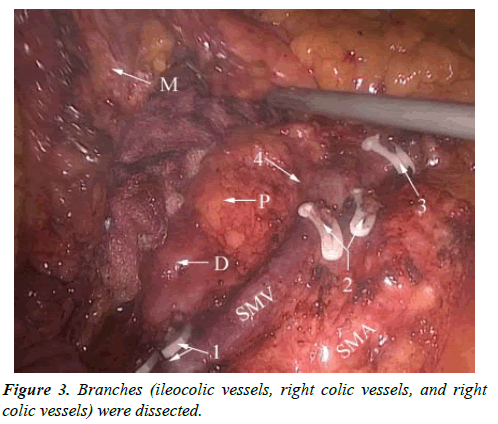 After complete mobilization, the bowel was externalized through a 4 cm incision by extending the umbilical incision and a plastic wound protector was used for wound healing. The terminal ileum and colon were exteriorized through this opening. After the specimen was removed, the end-to-side anastomosis was performed. The end of small intestine was then brought up to the side of the large intestine. Drainage was placed adjacent to the anastomosis through the left 12 mm port site. The incision and the port sites were closed with interrupted sutures (Figure 4). The total operative time was 144 min with an estimated blood loss of 30 Ml and an intraoperative urine output of 550 Ml. 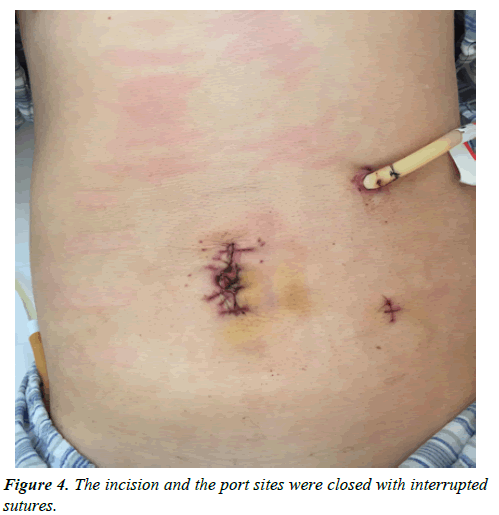 Figure 4: The incision and the port sites were closed with interrupted sutures.

The total surgical specimen length was 28.5 cm (6.5 cm terminal ileum segment and 22 cm colon segment). There were 39 lymph nodes isolated. The pathological result was moderately differentiated adenocarcinoma, stage as III (T3N1aM0), positive for extramural vascular invasion. Postoperative pain control was maintained through patient-controlled analgesia for the first 24 hours. The patient stayed afebrile throughout his postoperative course. Water was given on postoperative day 1. While bowel activity (as evidenced by flatus) occurred postoperative day 2, liquid diet was started, and drainage was removed. On postoperative day 3, the patient was advanced to low-residue diet. Finally, the patient was discharged on postoperative day 5. He was referred to adjuvant chemotherapy 30 days later. One year follow-up showed no complication or recurrence.

Resection of the right colon is commonly utilized for treating carcinoma of cecum, ascending colon, and hepatic flexure. Right hemicolectomy is required to be performed rigorously according to the principles of CME. The technique has been popularized by [6]. who described the removal of colon cancer with ligation of vascular pedicles at their origin and preservation of the mesocolic investment of the removed specimen to minimize tumor spread. The principles of CME in colon carcinoma are derived from the principles of total mesorectal excision, which have been associated with significant improvement of oncologic outcomes in rectal cancer and have been applied in several centers throughout the world [7]. To some aspects, there is little doubt that CME is an oncologically radical operation. No matter which method is chosen by the surgeon to perform the right colectomy, the priority of the principles of CME must be emphasized. The right colectomy with CME requires mobilization of the duodenum with the head of the pancreas and the mesenteric root to allow full exposure of the superior mesenteric vessels. In this aspect, it is important to point out that CME requires a substantial technical dexterity when compared to standard techniques, especially a laparoscopic approach.

Before employing TPLS, we had been able to operate right hemicolectomy by CLS (4 ports) skillfully to incorporate the principles of CME, since we had the experience of more than 50 cases. Although the SPLS is advanced in cosmesis, considering the limitations are related to SPLS, the principles of CME are hard to be applied in SPLS, regarding the limitations of SPLS including decreased range of motion, and restricted triangulation and retraction. Cosmesis should not be pursued at the expense of safety or efficiency. Therefore, we did not consider perform the SPLS immediately. Instead, we intend to try other methods less traumatic and more cosmetic than CLS. We decided not to employ 1 port for the first time, and performed right hemicolectomy through the technique of 3 ports, which requires only 1 surgeon and 1 camera operator. Reduction of ports also means more economic and less waste of human resources. This was our first case of TPLS performed on right hemicolectomy, with the principles of CME strictly implemented during the operation. The total length of bowel removed was adequate and D3 lymphadectomy seemed sufficient, while SMV and SMA were clearly skeletonized in this surgery. The number of harvested lymph nodes by TPLS from this case was more than that reported [4-6]. Furthermore, our operating time was acceptable. Since no recurrence and complication are revealed in one year follow-up, the procedure of TPLS in right hemicolectomy for treating carcinoma initiated by our team was considered to be safe and feasible.

TPLS is considered to be more economic, more cosmetic, and less invasive than CLS. A flexibility in TPLS surgery is that during the operation, it can be easily converted to CLS, which only needs more ports and surgeons, if the surgeon was difficult to perform TPLS barely by two hands For the beginners of SPLS, because all procedures have to be independently performed by only one surgeon under the limitations mentioned above, the surgical risks of perioperative complications and the possibilities of recurrence are likely to increase. Because only one surgeon is needed to operate TPLS, this method of right hemicolectomy can be considered as a favorable transition approach from CLS to SPLS. After we overcome the limitations, such as movement-impairing effect of laparoscopic instruments, restricted triangulation and retraction, it may be worth switching CLS to SPLS.

One case alone would not be sufficient to justify the use of TPLS in right hemicolectomy of carcinoma treatment. More cases are required to better evaluate this method before its broad application.

First and foremost, judged on this case, TPLS right hemicolectomy procedure for treating carcinoma is a safe and oncologically routine surgical method. The cosmesis function of TPLS is obviously observed. The TPLS technique is not our ultimate goal, but it can be considered as a supplementary method and transition approach to SPLS.