Recombinant human interferon alpha 2b (IFNα2b) is a therapeutic alternative for the treatment of Human papillomavirus (HPV) lesions. The medical records of 45 children and adolescents who received 300,000 IU intralesional or subcutaneous IFNα2b every two months for the treatment of recalcitrant HPV lesions were evaluated. A longitudinal retrospective observational study was conducted in the period between 02/01/2014 and 09/30/2015. Results: of the 45 patients evaluated, 7 abandoned the controls, so the final sample consisted of 38 patients. 52.6% women and 47.4% men. 81.5% of the patients presented clinical improvement. 42.1% had a total response and 39.4% had a partial response. 15.8% of the patients had no response. 2.7% of the patients showed relapse and no patient presented progression. Conclusion: We used IFNα2b 300,000 IU per application with an interdose interval greater than those published to date. The results obtained were similar for both administration routes. No adverse effects were recorded with the dose used. IFNα2b turned out to be an affordable medication. The majority of patients presented some degree of clinical improvement.

Cutaneous and/or mucosal infection due to human papilloma virus (HPV) produces benign epithelial proliferations called warts with different clinical forms depending on their location. HPV is a DNA virus that is classified according to genotype [1] existing to date more than 130 types, some of them with oncogenic potential [2]. HPV types 16, 18, 31, 33, 45, 52 and 58 have been associated with the development of malignant epithelial processes; in particular cervical carcinoma [3]. The choice of treatment depends on the location, size, number and type of warts, as well as the patient's age and cooperation. The existence of numerous therapeutic modalities reflects that none is totally effective. Most treatments point to the destruction of warts. The domiciliary treatments described are: Salicylic acid in concentrations between 15% and 27%, 5-fluorouracil (disadvised in pediatrics), podophyllotoxin, imiquimod 5%, cidofovir 1%, retinoids orally in severe cases and zinc sulfate accompanying other treatments [2].

The treatments that can be performed in the office are: topologies with podophyllin, topical trichloroacetic acid 50-90%, electrocoagulation and radiofrequency, cryotherapy, surgery, laser (the most frequently used are carbon dioxide and NdYAG: Neodymium - ytrium garnet aluminum), interferon (alpha or beta intralesional, in systemic or regional form), intralesional bleomycin and cantharidin [2,3].

Simple forms in immunocompetent patients generally respond favorably to standard treatments and in some cases self-evolve.

However, recalcitrant and/or multiple lesions can generate an aesthetic and/or social problem in these patients. There are numerous publications on the use of recombinant human interferon alfa 2b (IFNα2b) as an international therapeutic alternative and for more than 23 years it has been used in pediatric patients in Argentina [4].

Interferons are proteins or specific glycoproteins produced and released by the cells of each species in response to different stimuli, among which viral infections stand out. There are 3 different subtypes of interferon, depending on their structural, biochemical and antigenic characteristics.

These are produced by monocytes, leukocytes and B cells [5]. They are used in the treatment of hairy cell leukemia, Kaposi's sarcoma, hepatitis B and C [6]. They have antiviral, immunomodulatory and antiproliferative activity.

These are produced by fibroblasts [5]. They also have antiviral, immunomodulatory and antiproliferative activity.

These are produced by T lymphocytes. They have immunomodulatory activity. Also it is useful for the treatment of viral disease [5,6].

The exact physiological mechanism of action of these substances for the treatment of this type of injuries is not completely known. Different mechanisms of action have been proposed: direct antiviral, increase in Killer and natural-Killer activity, direct cytotoxicity, anti-proliferative effect of cell cycle slowing, stimulation of class I and II histocompatibility antigens and potentiation of other lymphokines, such as interleukin 1- 2 or TNF (Tumor Necrosis Factor). Interferon alfa has been, and continues to be, widely used for the treatment of HPV-related injuries. There is great heterogeneity in the dose patterns and routes of administration used by the different authors. The main forms of administration published are:

It is applied at doses of 0.1 to 1 million units per injury, in no more than 5 lesions, three times a week for three weeks.

1 to 3 million units 5 times a week for two weeks, followed or not by three weekly doses for four weeks [6-8].

When administered intralesionally, plasma concentrations are below detectable levels, although systemic effects have been reported, indicating some degree of absorption. The intramuscular and subcutaneous routes have a systemic bioavailability greater than 80%. The topical route is a route of administration in disuse due to unsatisfactory results. Biotransformation and elimination is completing renal. The half-life is 2 to 3 hours and the peak concentration in a single dose is 3 to 12 hours [9-11].

Side effects are dose-dependent, being moderate or mild at the doses discussed. Due to its cytokine-releasing effect, it can cause a flu-like syndrome with moderate fever, feeling of fatigue, myalgia and occasional headaches. There may also be a slight weight loss, which rarely reaches 10% of the original weight Also slight thrombocytopenia, rarely less than 100,000/ mm3, neutropenia, generally not less than 3000/mm3 and a slight increase in transaminases [5,6].

As of 2014, based on the satisfactory response of previous publications, we started using INFα2b for the treatment of multiple and/or recalcitrant warts in the Dermatology Service of the HIAEP "Sor María Ludovica" of La Plata.

The aim of our work is to describe our experience of 45 patients who received such treatment in the period between February 1, 2014 and September 30, 2015.

A retrospective observational longitudinal descriptive study was carried out in the Dermatology Department of HIAEP “Sister María Ludovica" of La Plata “in the period from February 1, 2014 to September 30, 2015.

The sample was constituted by children and adolescents between 2 and 16 years of age, residents in the province of Buenos Aires, who attended the consultation at the Dermatology service of our hospital with a diagnosis of HPV infection in the skin and/ or anogenital region, that have not responded to conventional treatments.

1) Children and adolescents between 2 and 16 years of age, any sex that met the criteria of clinical diagnosis of multiple vulgar warts (+5 lesions) or single or multiple plantar warts.

2) Children and adolescents between 2 and 16 years of age with recalcitrant condyloma acuminata.

3) Patients who met either of the two criteria did not have an associated pathology that contraindicated the use of interferon (IFN) -α2b.

1) Children and adolescents whose parents refused to apply IFN-α2b.

2) Children and adolescents with immunodeficiency.

Recombinant human interferon alfa 2b, BIOFERON®, Biosidus laboratory was used. The same was provided by the patients, kept in the refrigerator at 4 ° C and transferred from the pharmacy to the hospital in refrigerated boxes properly closed.

300000 IU was used in each application with a 1 ml syringe and a 25 G needle. Mediation was administered intralesionally (IL) in the large wart and subcutaneously in the deltoid or gluteal region when, for reasons of accessibility and/or the child's collaboration could not be used through IL. In patients who received more than one dose, the application was always carried out in the same way and in the same place. The interval between the doses was 2 months.

1) Age: According to years completed at the time of the study.

2) Sex: According to biological sex and classified as male or female.

Clinical characteristics of the lesions:

1) Number was considered as multiple warts = or >5 injuries.

4) Time of evolution of the disease: It was measured in months from the appearance of the lesions until the moment of the application of recombinant human IFN- α2b.

Topications: Salicylic acid at different percentage according to the location of the lesion, 70% trichloroacetic acid, podophyllin weekly for genital lesions, imiquimod 5%.

The response to treatment was evaluated taking into account the clinical examination of the patient, according to the following categories:

1) Total response: Total disappearance of the lesions after the application or applications of recombinant human IFN-α 2b interferon

2) Partial response: Decrease in the number of injuries by more than 50%.

3) Lack of response: No change in injuries.

4) Progression: Increase in the number or size of the injuries.

5) Recurrence of the lesions: The appearance of new lesions in the treated area was considered in the cases in which total response had been obtained. The time of follow-up of patients with total response to determine recurrence varied between 2 and 8 months depending on the time of disappearance of the lesions in the period established for the study.

The information obtained was taken to a database through Microsoft Excel 2007 and processed with the statistical program SPSS 18.0. A descriptive type statistical analysis was performed, using summary measures for qualitative variables (percentages).

The initial sample was 45 patients between 2 and 16 years of age.7 patients abandoned the controls and follow-up, for which the final sample consisted of 38 patients. 52.6% women and 47.4% men. Based on the efficacy variables, the results obtained were: 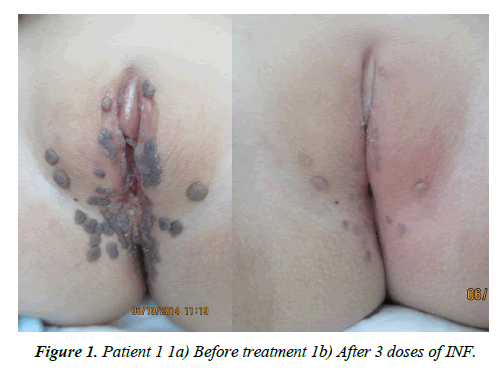 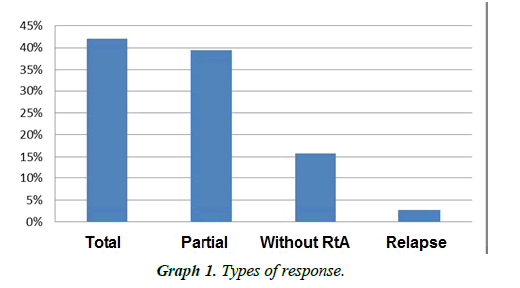 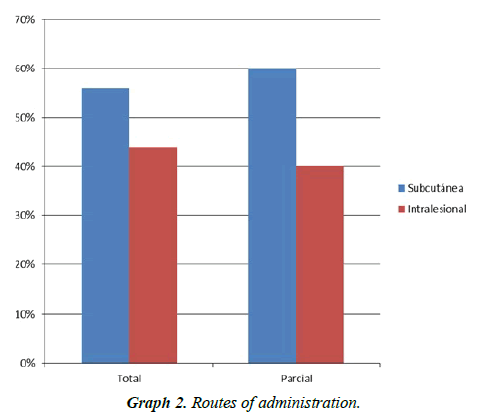 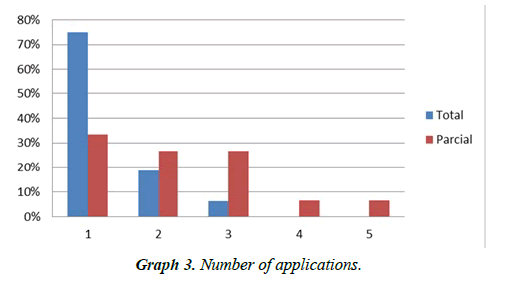 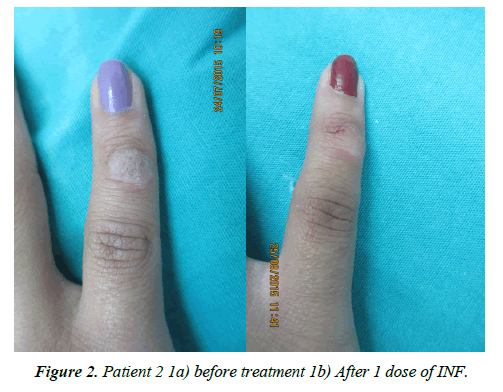 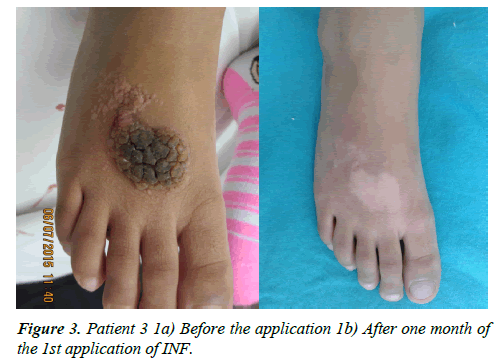 Figure 3: Patient 3 1a) Before the application 1b) After one month of the 1st application of INF. 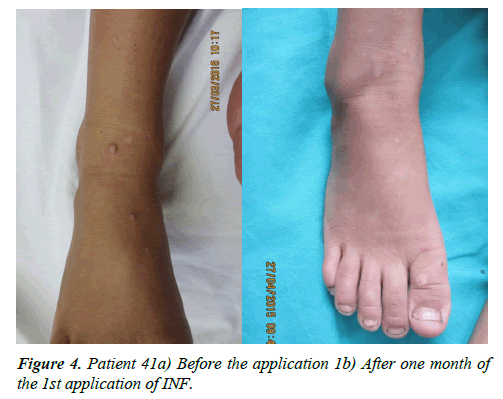 Figure 4: Patient 41a) Before the application 1b) After one month of the 1st application of INF.

4) Of the patients who did not respond to treatment, 66.7% received interferon subcutaneously and 33.3% intralesionally. 50% received a single dose so far and 50% received three doses (Graph 2).

We use doses of recombinant human IFN-α2b, less than those described in most publications, 300000 IU per application. The interdose interval was greater than those published to date. The results obtained were similar for both administration routes. Since the adverse effects of interferon were dose-dependent, our patients did not present them at the dose described above. Recombinant human IFN-α2b was found to be a cost-effective medication. In our experience, 81.5% of the patients presented some degree of clinical improvement.

Our sincere thanks to:

• Dras Silvia Pueyo and Gabriela Litwak whose work and experience have encouraged us to use interferon in our population.

• Dr. Horacio Gonzalez and Mrs. M. Victoria Fasano of the Pediatric Research and Development Institute (IDIP) of La Plata for their time and advice and to Guillermina Güidoni, Librarian of our hospital for their collaboration in the literature search.