Here, we investigated the effects of different concentrations of transforming growth factor β1 (TGF-β1) on the regulation of aggrecan (ACAN), collagen type II (COL2A1), and SRY-box 9 (Sox9) gene expression in human nucleus pulposus cells in vitro. Second-generation human nucleus pulposus cells were grown in culture media containing 4 different concentrations of TGF-β1 (0.1, 1.0, 10, and 100 μg/L). The control group was not treated with TGF-β1. Then, reverse transcription polymerase chain reaction was used to measure the gene expression of ACAN, COL2A1, and Sox9. There were no significant differences in expression between the control group and the group treated with 0.1 μg/L TGF-β1. However, significant increases in the expression of ACAN, COL2A1, and Sox9 were observed as the concentration of TGF-β1 increased, and expression was highest following treatment with 10 μg/L TGF-β1. Thus, TGF-β1 induced the expression of ACAN, COL2A1, and Sox9 in nucleus pulposus cells, suggesting that TGF-β1 may play an important role in the prevention and treatment of intervertebral disc degeneration.

Disc degeneration is a major cause of common conditions such as cervical spondylosis and low-back pain [1]. Current therapies, including conservative treatments and invasive procedures, can only relieve the pain of disc degeneration, but cannot restore disc structure and function [2,3]. Therefore, effective therapies for intervertebral-disc degeneration are urgently needed. The extracellular matrix of the nucleus pulposus is composed of COL2A1 and proteoglycans, which function to withstand shearing force and conductive pressure. ACAN, the most common proteoglycan, plays an important role in maintaining disc height and withstanding compression [4]. In the process of degeneration, activation of matrix metalloproteinase and aggrecanase lead to a rapid decrease in matrix-like collagen II and ACAN; this causes marked damage to and degeneration of intervertebral discs [5]. Therefore, regeneration of the nucleus pulposus is of great interest for designing new therapies to maintain the function of the intervertebral disc [1,6].

Nucleus pulposus cells are the major matrix-secreting cell type. However, only a few of these cells exist in normal nucleus pulposus tissues, and they are easily differentiated in vitro, causing them to lose their normal cellular phenotype and limiting their application in biological therapy [7]. Therefore, stimulation of human nucleus pulposus cells to synthesize extracellular matrix and maintain the normal cell phenotype through the application of growth factors or gene therapy as a means to reverse disc degeneration is emerging as an interesting therapeutic approach [8]. SOX9, COL2A1, and ACAN could be identified based on expression level despite of their resemble phenotype in nucleus pulposus cells and articular chondrocytes [9]. The expression of these chondrogenic proteins and transcription factors has been widely characterized as the nucleus pulposus phenotype [10]. Transforming growth factor β1 (TGF-β1) is involved in cell proliferation and extracellular matrix synthesis, and these functions have been confirmed in both cartilage and endothelial cells [11]. In this study, we demonstrated the effects of TGF-β1 on the expression of ACAN, COL2A1, and Sox-9 in normal human nucleus pulposus cells to explore effective methods to stop or reverse early stage disc degeneration.

The study protocol was approved by the ethics committee of our hospital. After obtaining written informed consent, nucleus pulposus samples were obtained from 3 donors with scoliosis who underwent anterior correction surgery. The donors were 8-19 years old, with a mean age of 13.8 years. Nucleus pulposus tissues were sealed in a sterile container, transported to the laboratory within 20 minutes, and screened immediately on a super clean bench. Then, the fibrous ring and adjacent tissues were removed with surgical scissors. The core nucleus pulposus tissues were separated from the vertebral cartilage under a microscope. Remnant tissues were washed twice with phosphate-buffered saline (PBS; HyClone, Logan, UT, USA) to remove debris, cut into pieces (1-2 mm2) with a scalpel, and digested with 0.25% tryptase (HyClone) at 37°C for 30 min, with shaking every 5 min. Next, the tissues were centrifuged at 1,000 × g for 5 min and then digested with 0.2% collagenase type II (Gibco-Invitrogen, USA) at 37°C for 4 h after removing the supernatant. Samples were filtered through a nylon screen and centrifuged at 1,000 × g for 5 min. The above procedures were repeated 3 times. Finally, the human nucleus pulposus cells were diluted in 2 mL of F12-10% FBS (HyClone) and counted using counting plates (Corning, NY, USA). The cells were seeded into culture bottles (Corning) at a density of 1 × 104 cells/mL in F12-10% FBS and incubated at 37°C and 5% CO2. The medium was changed every 3 days. Cells were grown until 80% confluence and then digested with 0.25% tryptase and split into 5 culture bottles for subculturing (the first passage). After reaching 80% confluence, cells were cultured and passaged again by the same method. Average cell viability was 96%, as detected by trypan blue staining. According to the regulations governing the administration of medical institutions issued by the state council of the PRC, patients were informed of the study protocol and related risks before this study, and they signed consent forms.

Human nucleus pulposus cells from the second passage, grown to 80% confluence, were centrifuged at 1,000 × g for 5 min. The supernatant was removed, and F12 medium containing 10% fetal bovine serum (FBS; HyClone) was added to obtain a cell density of 1 × 104 cells/mL. The cells were split into 5 culture bottles. After 24 h incubation, the medium was removed, and 10% FBS/F12 medium containing 0.1, 1.0, 10, or 100 μg/L of TGF-β1 (Peprotech, Rocky Hill, NJ, USA) was added (the treatment groups). Medium without added growth factor was used for the control group.

Cells from each group were observed by inverted phase contrast microscopy every day during this study, and differences in morphology and growth status were compared among groups.

Cells in all groups were cultured for 72 h and then digested with 0.25% tryptase. Then, the cell survival rate was determined by cell counting using trypan blue exclusion.

Cells were cultured for 72 h and total RNA was extracted using TRIzol one-step (Gibco, Grand Island, NY, USA), according to the manufacturer’s instructions. RNA purity and concentration were assessed using an ultraviolet spectrophotometer. Next, 2 μg of total RNA was reverse transcribed with AMV revertase (Takara, Shiga, Japan) according to the manufacturer’s instructions. The cDNA for ACAN, COL2A1, and SOX-9 was amplified by real-time PCR. Primers were synthesized by Beijing Aoke Bio-Tech Co., Ltd. (Beijing, China), as previously described [8]. Glyceraldehyde phosphate dehydrogenase (GAPDH) was used as an internal reference. Table 1 shows the sequences of the primers for ACAN, COL2A1, and Sox9 [12]. The reaction conditions were 30 cycles of 3-stage PCR (denaturation at 94°C for 30 s, annealing at 52°C for 45 s, and extension at 72°C for 45 s). The amplified cDNA products were analyzed by 1.5% agarose gel electrophoresis. Electrophoresis photographs were analyzed using the IBAS2.5 image processing system. The absorbance ratios of ACAN, COL2A1, and Sox9 to GAPDH were used to determine the relative expression levels.

Each experiment was repeated 3 times. Statistical analysis was performed using SPSS15.0 software (SPSS, Inc., Chicago, IL, USA), and the results are presented as the mean ± SD. Oneway analysis of variance was used to compare the control and treatment groups. The t-test was used to compare 2 groups. A P value less than 0.05 was considered statistically significant. 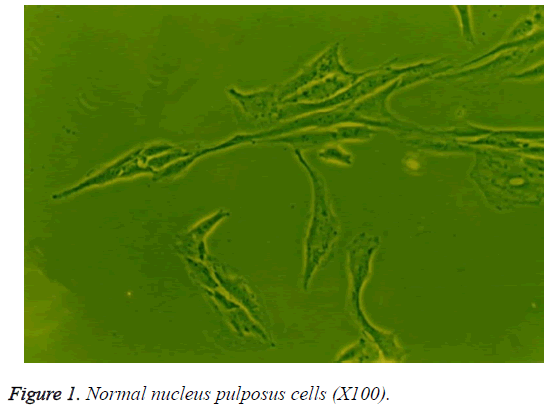 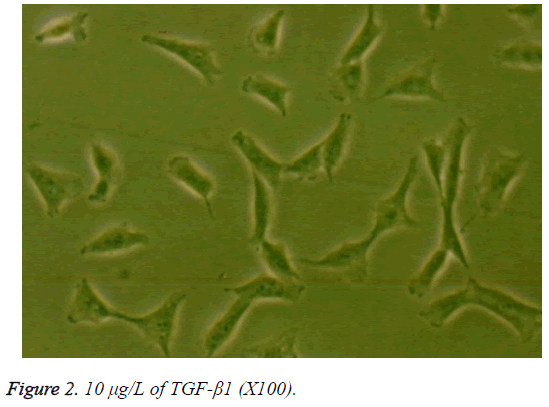 Effects of TGF-β1 on the gene expression of ACAN, COL2A1, and SOX-9

Current therapies for degenerative disc disease include conservative treatment and surgery. However, these methods only relieve the symptoms but do not eliminate the cause of disc degeneration, and the long-term effects are not ideal [17]. With the advent of tissue engineering and regenerative medicine, cell-based therapies for the repair of degenerative discs have gained attention [18,19]. Cytokines are used to improve the activity of nucleus pulposus cells and promote the synthesis of normal extracellular matrix, enabling the reversal of disc degeneration. TGF-β1 is a 2-chain polypeptide with a molecular weight of 25 kDa. It is a secreted protein that performs many cellular functions, including control of cell proliferation and cell differentiation, and promotion of extracellular matrix synthesis [20]. Vadala et al. [21] used a scaffold and directly incorporated TGF-β1 into a polymeric solution to culture bovine annulus fibrosus cells. After 3 weeks, glycosaminoglycan and total collagen levels were significantly higher in the treatment group than in the control group, indicating that TGF-β1 could be used to treat disc degeneration.

A previous study showed that TGF-β1 could promote cell proliferation in the presence of 10% serum, and there was a dose-effect relationship from 1 to 10 μg/L TGF-β1 [22]. Because nucleus pulposus cells lack specific cell markers, some studies evaluated ACAN, COL2A1, and Sox-9 expression as specific markers. Sox-9 promotes cartilage cell differentiation and maintains the cartilage cellular phenotype, which is closely related to disc degeneration. Sox-9 increases the synthesis of ACAN and COL2A1 in the disc matrix [23].

This study was supported by National Natural Science Foundation of China (30370389).