Somnipathy refers to the abnormal sleep patterns that can seriously affect normal, mental, emotional and physical functioning of patients [1]. Somnipathy can affect both children and adults [2,3]. According to 2014 report of National Sleep Foundation, the average sleeping time of children between 6-17 y is 1-2 h shorter than the recommended, resulting in emotional and physical problems. An investigation on workers has shown that, chronic sleep deprivation caused by long work hours was found to be closely correlated poor work outcomes including occupational accidents presenteeism and absenteeism [4]. Numerous clinical studies have shown that poor sleep quality and chronic sleep disorders can contribute to the onset, development and progression of metabolic diseases including insulin resistance and obesity [5-7]. Sleep disorders are usually accompanied by the emergence of endocrine disorders and inflammatory response, which may eventually lead to the occurrence of type 2 diabetes but not type 1 [8-12]. It’s well accepted that DNA methylation and hydroxymethylation are closely correlated with the prevalence of type 2 diabetes, and the control of DNA methylation may provide new opportunities for the prevention of this disease [13,14]. Sleep disorder can also be significantly affected by epigenetic factors. It has been proved that that epigenetic factors could regulate the expression of genes involved in circadian clock networks at both transcriptional and post-transcriptional levels [15]. As an important component of circadian clock system, sleep plays pivotal roles in regulating fundamental biological rhythms controlled by circadian clock. In addition, sleep disorder can regulate gene expression in mouse brain through DNA methylation and hydroxymethylation to affect stress response and circadian rhythm [16]. In view of the pathogenesis of type 2 diabetes and the effects of sleep disorder on DNA methylation and hydroxymethylation, it will be reasonable to hypothesize that sleep disorder can also affect the development of type 2 diabetes by regulating DNA methylation and hydroxymethylation.

Thirty patients with somnipathy combined with type 2 diabetes were selected in the First Affiliated Hospital of Xinjiang Medical University from January 2015-2016 according the criteria described in ICSD-3.

Inclusion criteria: (1) With complaints of insomnia, including difficulties in falling asleep or sleep maintenance and early morning awakenings; (2) With daytime functional impairment, including fatigue, emotional problems and lack of motivation; (3) With symptoms cannot be explained by the lack of sufficient opportunity or suitable environment; (4) With frequency of sleep disorder greater than three times per week and duration longer than three months.

SPSS19.0 (SPSS Inc., Chicago, IL, USA) software was used to analyze the data. Comparisons between groups were performed by t-test. p<0.05 was considered to be statistically significant.

Methylation of DLG4 and Rab11

Studies have shown that DNA methylation could significantly affect the expression of DLG4, Rab11 and other genes in brain tissue of mice. Therefore, methylation levels of DLG4 and Rab11 in patients with somnipathy were investigated in this study. Results showed that methylation levels of DLG4 (Figure 1A) and Rab11 (Figure 1B) in patients with somnipathy were significantly higher than those in control group (p<0.01).

Effect of methylation on transcription of DLG4 and Rab11 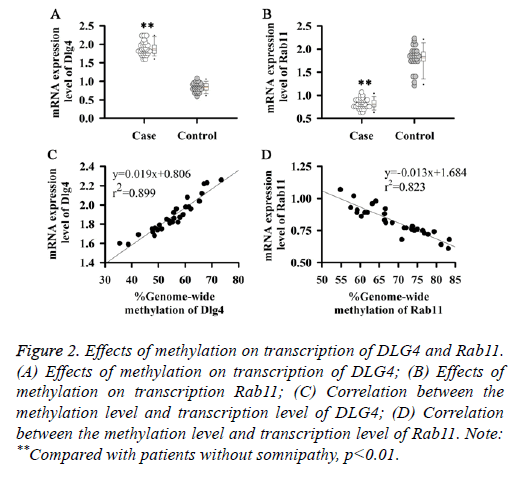 Hydroxymethylation of Arc, Creb3 and Erg1

Effects of hydroxymethylation on transcription of Arc, Creb3 and Erg1 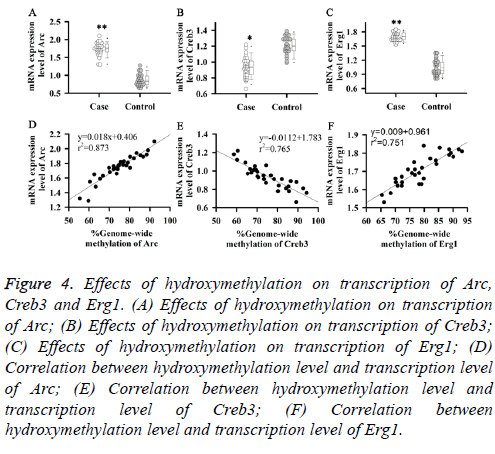 Sleep disorder is closely related to the development of various human diseases. In the study of Parkinson disease, Friederike et al. reported that Rapid Eye Movement (REM) sleep behaviour disorder, which is associated with aging, was a frequent disturbance for all stages of PD without preferred PD subtypes and gender [17]. In another study, fatigue caused by poor sleep was proved to be one of the main causes of inflammatory bowel disease [18]. Interactions between immune system and brain were mediated by a complex network formed by cytokines, endocrine hormones and autonomic nerves, while sleep disorders can disturb the function of this network to increase the levels of inflammatory mediators to participate in the progression of cardiovascular diseases [19]. Sleep controls daily physiological patterns which is important for normal metabolic health. Sleep deficiencies caused by circadian misalignment, night eating syndrome, shift work, sleep apnea, insufficient sleep schedules, narcolepsy and many other factors can potentially cause metabolic dysregulation, leading to the occurrence of various metabolic diseases including type 2 diabetes, obesity etc., [20]. Numerous studies have shown that the reduced sleep quality could contribute to the development of type 2 diabetes [21]. A recent large-scale clinical study has shown that patients with sleep insufficiency was more likely to develop type 2 diabetes compared with the ones with sufficient sleep and quality and quantity of sleep can be used to predict the risk of the progression of type 2 diabetes [22]. In clinical treatment of type 2 diabetes, insufficient sleep was found to be significantly related to the poor treatment outcomes of blood glucose control [23]. Besides insufficient sleep, long sleep was also found to be positively correlated with the development of various diseases including diabetes, obesity, cardiovascular diseases and hypertension, and sleep duration of 7-8 h can directly and indirectly decrease the risk of chronic disease [24].