Right pulmonary artery (RPA) to left atrium (LA) fistula is a rare variant of pulmonary arteriovenous fistula (PAVF) which can cause central cyanosis. We are reporting a case with central cyanosis with structurally normal heart on 2-dimensional (2D) echo which subsequently was diagnosed as a case of RPA to LA fistula. He underwent successful trans- catheter closure of the fistula by duct occlude device.

RPA to LA fistula is a rare variant of pulmonary arteriovenous fistula (PAVF) which can present with central cyanosis, dyspnea and if left untreated can be complicated with hyperviscosity syndrome. Investigative modalities include Transthoracic echocardiography (TTE)/Transesophageal echocardiography (TEE) with contrast echocardiography, Multi Slice Computerized Tomographic (MSCT) angiography or by cardiac catheterization. It can be treated surgically by ligation of fistulous tract, but now a day’s trans-catheter closure has become an alternative option. 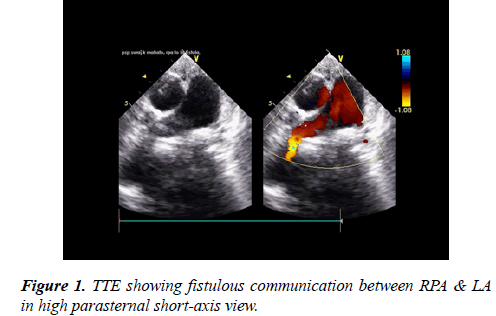 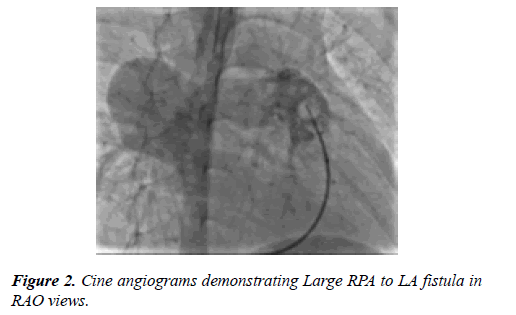 A Multi Slice CT angiogram revealed a large tortuous fistulous communication between RPA and LA. Trans-catheter device closure was planned. An informed consent was obtained from the parents. Patient was electively intubated and ventilated. Two venous accesses by 6(F) short sheaths (Terumo Medical Corporation, Somerset, New Jersey) were taken in both the groins. One arterial access (RFA, 4F) was taken for continuous hemodynamic monitoring. The child was fully heparinized (100 IU/kg). Pulmonary artery (PA) angiogram was done by the Berman catheter (Arrow International Inc, Pennsylvania). Fistulous communication between RPA and LA was best profiled in RAO view (Figure 3). The narrowest segment in angiogram measured 16 mm. We could cross to LA via PFO with a 5 F Multipurpose catheter (Cook Inc, Bloomington, IN). 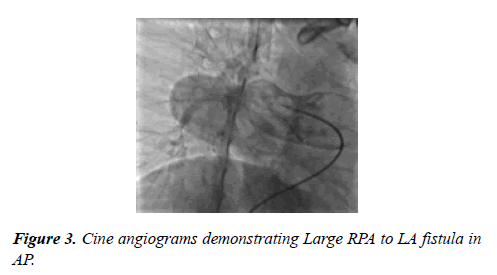 The fistula was crossed from LA side with an angulated 0.032” × 260 cm glide wire (Terumo Medical corp, Somerset, NJ). The wire was kept in RPA. A veno-venous loop was made by snaring the wire from RPA by a gooseneck snare (ev3 Endovascular Inc., Plymouth, Minnesota, USA).

A 18/20 mm duct occlude device (Heart R, Life tech Scientific, Shenzhen) was selected to close the fistulous tract. We didn’t do balloon sizing for selection of device. We had selected the device based upon angiographic and CT images. A 9 (Fr) Lifetech ASD delivery sheath was advanced over the glide wire from the left femoral vein across the PFO and it was parked in RPA. The sheath was completely de-aired. The aortic retention disc of the device was deployed under fluoroscopy in the RPA and the waist of the device into the fistulous tract. Post procedure selective RPA angiogram showed complete closure of the fistula without any pulmonary arterial or venous obstructions (Figure 4). 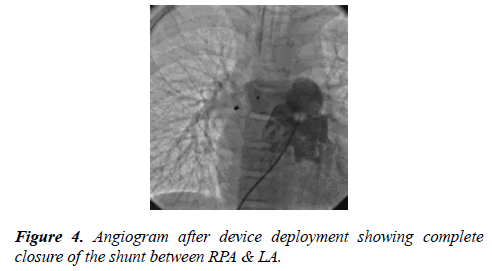 After device deployment the systemic saturation immediately jumped to 98%. The total fluoroscopic time was 38 min and total contrast used was 3 ml/Kg. The patient was extubated on table and discharged after 48 hours of observation on aspirin 5 mg/kg/day for 6 months (Figures 5 and 6). 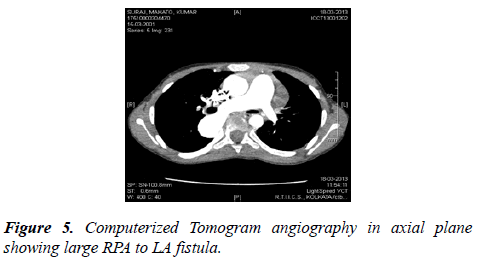 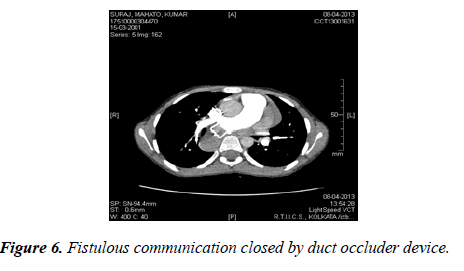 On follow up after 3 months CT angiogram was done which showed device was perfectly in place without any obstruction or erosion of the nearby structures.

Pulmonary artery (PA) to LA fistula is a direct communication between these two structures. The 1st description of such anomaly was given by Friedlich and co-authors in 1950 [1]. Some authors consider this anomaly as a variant of a PAVF however; unlike classical PAVF, PA to LA fistulas do not involve direct communication between an artery and a vein. PA to LA fistula is an uncommon variant of PAVF, but it shares the same clinical features like central cyanosis, normal cardiovascular examination, and a shadow parallel to the left heart border on chest x-ray.

Except few reported cases of post traumatic RPA to LA fistula, most of the cases are congenital in origin [1-3]. In about 95% cases, this communication identifies between RPA and LA [4]. Only few cases of left pulmonary artery (LPA) to LA fistula have been reported in the literature so far [3,5,6].

Regarding associated cardiac malformation, atrial septal defects (ASD) are the most common. Other concomitant cardiac malformations are rare, but anomalies of the right lung, such as absence of the lower or middle lobe, right lung sequestration, and diverticulum of the right main bronchus have been reported [5]. Chauhan et al., reported a transcatheter closure of large RPA to LA fistula in a child after surgical closure of a large OS-ASD. That patient’s desaturation was obvious only after surgical closure of ASD [9].

If left untreated it can be complicated with systemic embolism or cerebral abscess. First surgical repair of such fistula was done by Blalock; after that nearly 70 cases of RPA to LA fistula have been described in literature [4-6,8,10].

Previously surgical repair was the only available treatment for such lesion, however now-a day’s trans-catheter closure of such fistulous tract has become a suitable alternative option. Presence of a small PFO in our patient facilitated the retrograde approach. In fact, the technique of trans-septal retrograde approach to close the RPA to LA fistula using duct occluder devices has already been reported in literature. Like our case Abe T et al., also utilized retrograde approach to close the fistulous tract after doing septal puncture [7]. We used the large duct occluder device in a small child without any complications.

Another alternative route for RPA to LA fistula closure is antegrade approach through the right ventricle to the main pulmonary artery to fistulous tract. In such situation the aortic disc of the device would be in LA side and PA disc would be in RPA side.

As like our case Karunakar Vadlamudi et al., had used PDA device to close fistulous tract [11]. On the other hand, Chauhan el al reported transcatheter closure by 12 mm muscular device. Other suitable option through this approach would be a vascular plug.

Transcatheter closure of RPA to LA fistula has almost replaced the surgical closure. So, we conclude that even the larger defects can be closed safely by trans-septal approach using a duct occluder device.