Total alkaloids in Dipsacus asperoides and their effects on proliferation of osteosarcoma SaOS-2 cell lines and gene expression of VEGF.

Osteosarcoma is the most common malignant bone tumor, which accounts for about one third of all bone malignancies. Despite the widespread implementation of high-dose chemotherapy and limb salvage surgery, the survival rate of osteosarcoma patients, especially the 5-year survival rate, is only around 60% due to high malignant potential, early lung metastasis, and poor prognosis [6]. Therefore, effective preventive measures need to be established to improve the survival rate of patients. This study explores the effects of total alkaloids in Dipsacus asperoides on the biological behavior of osteosarcoma SaOS-2 cell lines in-vitro, in order to provide the theoretical basis for the application of total alkaloids in Dipsacus asperoides for the treatment of osteosarcoma.

After air drying, Dipsacus asperoides was placed in a 60° oven and dried to a constant weight, then crushed into powder using a pulverizer. The mixed powder was then screened by using 40-mesh, 60-mesh, and 80-mesh size sieves.

Ten gm of dry mixed powder was weighed, appropriate amount of 75% ethanol added and extracted under reflux three times, each time lasted 2 hrs. The same operation was repeated three times. pH of the extracts was adjusted to alkaline and again extracted three times with chloroform and evaporated to dryness in a water bath to produce a pale yellow powder. This powder was the crude extract of total alkaloids from Dipsacus asperoides, which was weighed for the calculation of extraction yield.

Ten gm of dried mixed powder of Dipsacus asperoides was weighed, placed in a beaker and completely immersed in 75% ethanol, then extracted by cold maceration twice, each time lasting 24 hrs. After filtration, the filtrates were collected and the pH of extracts was adjusted to distinct alkaline. The resulting extracts were re-extracted three times with chloroform, and evaporated to dryness in a water bath to yield a pale yellow powder. This powder was the crude extract of total alkaloids from Dipsacus asperoides, which was weighed for the calculation of extraction yield.

Ten gm of dried mixed powder of Dipsacus asperoides was weighed, placed in a 100 ml beaker, 100 ml of 75% ethanol was added and ultrasonicated at room temperature under an ultrasonic power of 200 W for 30 min. The procedure was repeated three times. After filtration, filtrates were collected and the pH of extracts adjusted to distinct alkaline. The extracts were then re-extracted three times with chloroform, and evaporated to dryness in a water bath to obtain a pale yellow powder. This powder was the crude extract of total alkaloids from Dipsacus asperoides, which was weighed for the calculation of extraction yield.

Cryopreserved human osteosarcoma SaOS-2 cell lines were taken, thawed in a 37°Cwater bath, seeded in 10 cm cell culture dishes, cultured in 15% FBS-containing medium, and placed in an incubator set at 37?, 5% CO2 with saturated humidity and incubated. Cells were grown adherently. Twenty-four hours later, culture medium was replaced, and non-adherent cells were discarded. Afterwards, culture medium was replaced once every 2-3 days. Cells were passaged after they had grown to confluence, the cells were dissociated at 37°Cwith cell dissociation solution for 1-2 min, and passaged at a 1:3 ratio. The experiment was divided into a blank control group, and intervention groups of 5%, 10%, and 15% of total alkaloids in Dipsacus asperoides. Cells in the blank control group were cultured in the medium containing 15% FBS; alkaloids and 15% FBS culture medium were prepared in volume ratios of 0.5:9.5, 1:9 and 1.5:8.5, respectively, in the 5%, 10% and 15% of total alkaloids intervention groups.

After dissociation with cell dissociation solution, the well-grown SaOS-2 cells were blown and cell count was adjusted to 2×103 cells/ml. Then the cells were added to 96 well plates at 100 μL per well, and placed in a 37?, 5% CO2 incubator. After incubation in complete medium for 24 hrs, culture medium and non-adherent cells were removed, and 10 μL of CCK-8 solution was added to each well on the 1st, 2nd, 3rd, and 4th days, respectively, after incubation in a cell incubator for an additional 1 hr. Absorbance was measured by a microplate reader using a 420-480 nm filter.

Cells were seeded in 96-well plates at 1×104 cells/well. After culturing for 24 hrs using complete medium; culture medium and non-adherent cells were removed. Three ml of corresponding culture media was added separately to the blank control and experimental groups. The liquids were changed once every 2 d. After intervention for 7 d, RNA was extracted, and VEGF mRNA expression was determined by RT-PCR. 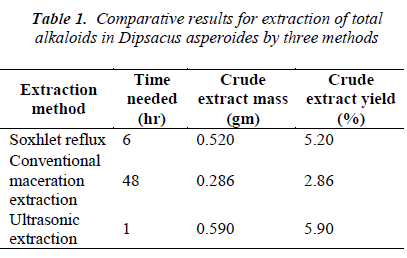 In order to investigate the optimal conditions for ultrasonic extraction of total alkaloids in Dipsacus asperoides, using ethanol as solvent, 9 experiments of 3 factors and 3 levels were designed using orthogonal table L9 (33 ). By taking different ultrasonic extraction times, different extraction powers, and different mesh sizes as main investigating factors and utilizing the ‘balanced dispersion’ characteristics of orthogonal test, the optimal conditions were determined with the yield of crude extract as the indicator. The factors and levels are shown in Table 2. 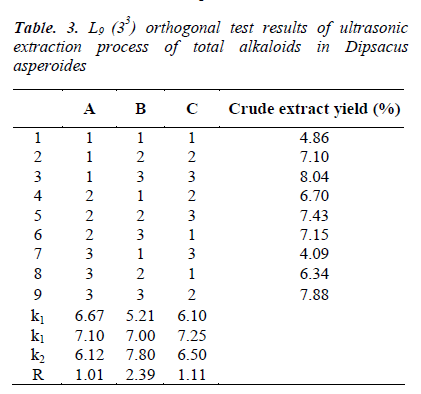 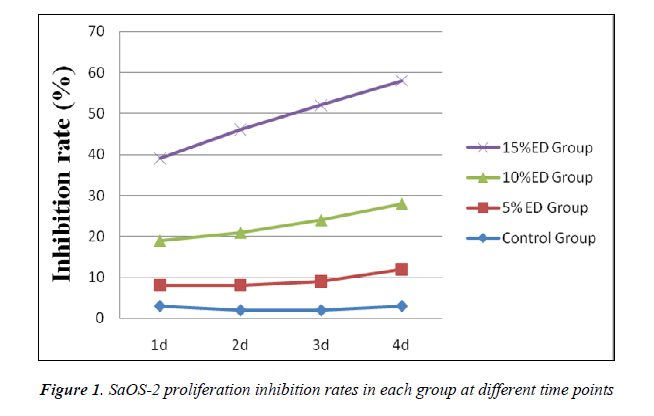 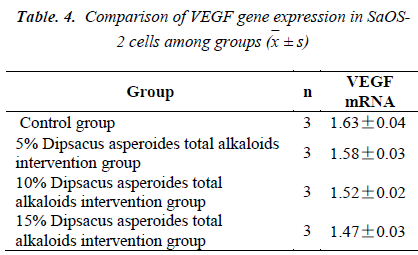 Methanol and ethanol can dissolve free alkaloids and their salts, so the use of methanol and ethanol as the solvents for extraction of alkaloids is very common. Although methanol has high polarity, low boiling point, and better solubility than ethanol, it has relatively high toxicity, and therefore, in most cases, ethanol is more preferred as a solvent [8].

Alkaloids often combine with organic acids (such as caffeic acid, citrate acid, oxalic acid, meconic acid) to form salts. During the extraction, crude drug powder can be directly soaked, percolated or heat extracted with alcohol, water or acid water (usually 0.5%-1% sulfuric acid or acetic acid) and other reagents. Different alkaloids have different pH values. Solvents such as chloroform, dichloromethane, and benzene can also be used in the extraction.

Osteosarcoma, which occurs mostly in adolescence, is a type of solid tumor derived from mesenchyme. It is characterized by rich blood supply, high degree of malignancy, strong invasiveness, early metastasis, high metastasis rate, as well as poor prognosis. For early treatment of osteosarcoma and improvement of the survival rate of patients, the search for a safe and effective drug is of utmost importance.

Use of Traditional Chinese Medicine (TCM) for the treatment of malignancies has become a characteristic Chinese method of cancer treatment. TCM treatment of tumors emphasizes more on the aspects of stabilization of tumors, regulation of immune function, improvement of clinical symptoms, reduction of medication side effects and prolongation of patients' survival time [9]. A study has found that total alkaloids in Dipsacus asperoides have direct inhibitory effect on tumor growth; radiosensitizing and radioprotective effects, as well as chemosensitizing and attenuation effects [10]. Therefore, the total alkaloids in Dipsacus asperoides have been used widely in clinical treatment of tumors, but their effect on osteosarcoma is yet to be reported [11-13].

Immortalization is an important biological characteristic of cancer cells. In the present study, we used CCK-8 detection method to investigate the effect of total alkaloids in Dipsacus asperoides on SaOS-2 cell proliferation. Tetrazolium (WST-8) is the major component of CCK-8 kit; it is a compound similar to MTT, which is reduced by the dehydrogenase within the mitochondria to produce formazan in the presence of electron coupling reagent [14]. Our study found that, total alkaloids from Dipsacus asperoides can effectively inhibit osteosarcoma SaOS-2 cell proliferation, and the inhibition efficiency was enhanced with increasing concentration of the total alkaloids.

The growth of malignancies, particularly solid tumors mainly depend on angiogenesis, moreover, tumor itself can also induce new aberrant angiogenesis, thus providing the pathway for the spread of tumors. VEG is the vascular endothelium-specific mitogen, which can promote angiogenesis, and thus provide the material basis for tumor cell metastasis. Once the stationary endothelial cells are exposed to VEGF, they will express proteases to degrade the extracellular matrices, so that the cells will migrate and proliferate, new blood vessels will be formed, which will further promote tumor growth [15]. Therefore, the suppression of VEGF expression is beneficial in the treatment of osteosarcoma. Although our study did not reveal that the total alkaloids in Dipsacus asperoides could effectively suppress VEGF gene expression in SaOS-2 cells, we found that the expression value of VEGF was in a decreasing trend with increase in concentration of the total alkaloids.

This study illustrates that total alkaloids in Dipsacus asperoides can effectively inhibit the proliferation of SaOS-2 cells, which might lay a theoretical foundation for the use of these total alkaloids in the future treatment of osteosarcoma, meanwhile, providing a platform for our follow-up studies.

In future, we wish to improve the concentration and purity of ligustrazine in order to clarify whether the total alkaloids in Dipsacus asperoides can effectively suppress the VEGF gene expression in SaOS-2 cells and study the mechanism of its action on apoptosis of SaOS-2.