The purpose of this study was to investigate if it was possible to strengthen a tooth for autologous tooth crown transplant by using the resin impregnation method already used for industrial purposes. Eightyfour upper first premolar tooth crowns were divided into three groups (n=28 each) to be kept either wet, dry for one day, or dry for one week. In addition, within each group, the teeth were allocated to resin impregnation (RE, n=14) or no resin impregnation (NRE, n=14). A compression test was carried out on all teeth in the three groups, broken the specimens were flat-polished in cross-section with #400,1000 gritstone and observed using Confocal Laser Scanning Microscopy (CLSM). The area of bonding resin was measured using ImageJ software. The mean maximum compressive strength in the RE group was significantly higher than that in the NRE group in the all tooth condition. In CLSM observation, the deepest penetration of bonding resin into the tubules was observed in crowns that had been dried for one week. Based on the findings of this study, we conclude that impregnation with bonding resin can strengthen teeth.

Research and development on artificial esthetic materials have focused on how to simulate the esthetic appearance and functions of natural teeth. However, disadvantages are still associated with these materials, which differ markedly from those in natural teeth. We have previously examined autologous tooth crown transplantation [1,2]. Autologous tooth crown transplants are created by CAD/CAM using teeth extracted from the patient to form the shape of a crown, inlay, or onlay. However, the strength of the tooth may be reduced by the cutting procedures involved [3,4]. We hypothesized that autologous tooth crown transplants need to be strengthened due to the multiple tooth cutting procedures required. However, limited information is available in the literature on tooth strengthening.

An industrial technique called resin impregnation has been reported. Resin impregnation is used to enhance porous products, such as concrete, cast products, and paper [5-7]. A vacuum device is employed in this technique and is useful for penetrating resin into every corner and for strengthening purposes. We previously focused on the tubular structure of dentin and have attempted to use this technique for tooth strengthening.

In the present study, we investigated whether it is possible to strengthen a tooth for autologous tooth crown transplantation using this resin impregnation method.

A compression test was performed on all teeth in the three groups. All specimens were stored in saline before a fracture test.

Once broken, the specimens were flat-polished in cross-section with #400, 1000 gritstone and observed using Confocal Laser Scanning Microscopy (CLSM). The area of bonding resin in red was measured using ImageJ software (National Institutes of Health, Bethesda, MD, USA). The area of bonding resin was calculated as the red area/image area (%). The experimental steps used are shown in Figure 1. 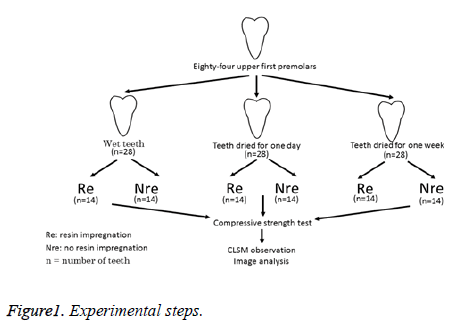 Each of the 84 extracted non-carious human upper first premolars was cut at the root on the cemento-enamel junction using a diamond bur mounted on a high-speed hand piece under water coolant. The pulp of the tooth crown was removed using a round steel bur mounted on a low-speed hand piece. Etching was then performed for 30 s followed by ultrasonic cleaning for 10 min to remove the smear layer.

Twenty-eight tooth-crown sets were stored in a dry room at ambient temperature for one day or one week. The remaining 28 tooth-crown sets were stored in water. Rhodamine B fluorescent dye was mixed into the bonding resin at a concentration of 0.1% to confirm penetration of the resin. Fourteen tooth crowns from each of the three groups were immersed in Rhodamine B mixed bonding resin.

Immersion was performed under low vacuum conditions (-70 kPa). The vacuum pump used in the present study and a schematic diagram of the immersion device are shown in Figures 2 and 3, respectively. Air holes were created in the cap of the vial containing the bonding resin using a steel rod. Dental floss was fixed to the crown occlusal surface using a laboratory adhesive and passed through the air holes in the cap in order to prevent the tooth crown from making contact with the bonding resin. The vial was embedded in alginate impression material in a vacuum cup while pulling dental floss in order to prevent the crown from being dipped into the bonding resin. The cap of the vacuum cup was then closed. The tooth crown was left for one minute in a non-immersed state in the bonding resin under low vacuum conditions. The dental floss was then pulled from the vacuum cup and the tooth crown was immersed in bonding resin for one minute. Normal atmospheric pressure was restored and the specimens were immersed for 5 min. The crowns were then removed and light curing was performed for 1 min. The immersion step used is shown in Figure 4. 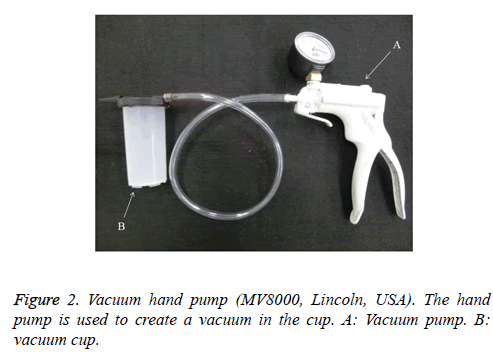 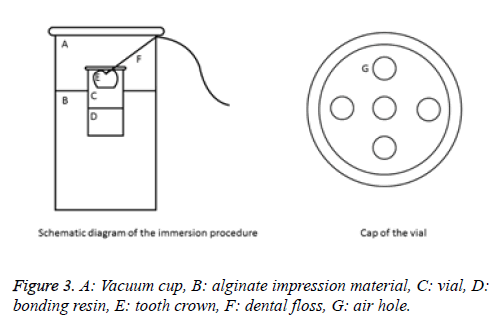 The fracture load was assessed by compressive loading in a Universal testing machine (Shimazu, Kyoto, Japan) at a crosshead speed of 1 mm/min. The load was applied to the tooth crown using a steel ball, 4 mm in diameter, contacting the occlusal surface at two well-defined contact points and parallel to the tooth axis. A schematic representation of the tooth crown with the steel ball in place is shown in Figure 5. The load at fracture was evaluated by maximum compression in the load vs. displacement to assess whether there was catastrophic failure. 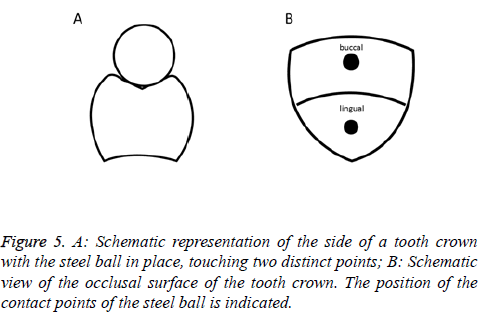 The statistical analysis was performed using two-way Analysis of Variance (ANOVA) and Tukey’s test to identify differences between the groups. The level of significance was set at 0.05 for all statistical analyses. 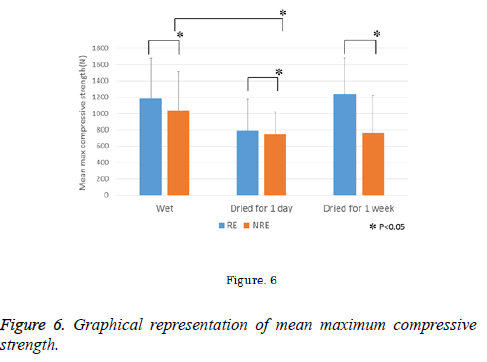 Images of polished cross-sections from broken specimens, as observed on CLSM, are shown in Figure 7. The deepest penetration of bonding resin into the tubules occurred in crowns that had been dried for one week. 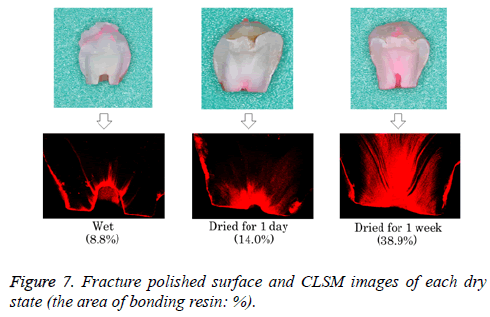 Figure 7: Fracture polished surface and CLSM images of each dry state (the area of bonding resin: %).

We performed autologous tooth crown transplantation using teeth from the tooth bank at our institution [1,2]. Onlays were formed from frozen teeth using CAD/CAM and good outcomes were observed one year after transplantation [1]. However, previous studies reported that tooth strength is reduced by treatments involving repeated cutting of teeth, and tooth crown transplants that involve a lot of cutting are considered to be of insufficient strength. In the present study, we investigated improvements in the strength of transplanted teeth using an industrial resin impregnation technique for product enhancement.

A crack in concrete may be repaired by injecting epoxy resin [5,8,9]. In addition, blow holes may be filled by injecting resin, thereby strengthening the cast product [6,10]. Paper containing resin-impregnation supplements mitigates the disadvantage of an inability to withstand humidity [7]. A vacuum is applicable to these steps and promotes the penetration of resin into cracks. A vacuum is utilized with the resin impregnation technique in industrial settings and involves the principle of Boyle’s law (i.e., the volume of a gas varies inversely with pressure) [11]. The mechanism of resin impregnation using Boyle’s law is shown in Figure 8. This principle was applied in the present study. 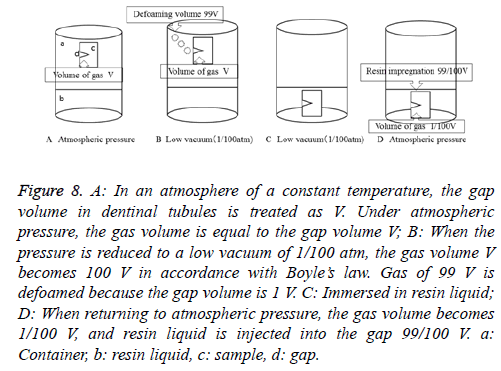 In a compressive strength test, setting of the load point markedly influences the outcome of the strength test for the crown. Various methods have been used in previous studies, such as making the occlusal surface flat and applying a load at one point, applying a load from two directions in the axial plane of the crown, and tapering the occlusal surface and applying a load at two or three points [12-15]. In the present study, we set the two-point load using a steel ball with a diameter of 4 mm, which is considered to ensure the same point of load.

Two-way ANOVA showed a significant difference in fracture strength between the RE and NRE groups independent of the tooth drying conditions used. Mean maximum compressive strength was significantly higher in the RE group than in the NRE group, regardless of the tooth drying conditions. Our results showed that the tooth is enhanced by voids such as dentinal tubules or cracks being filled with a bonding resin.

Observation of resin impregnation by CLSM

In the present study, broken specimens were flat-polished in cross-section with #400, 1000 gritstone, and observed using CLSM. Common methods used to observe the bonding structure, such as in the hybrid layer and resin tags in dentin, are Scanning Electron Microscopy (SEM) and Transmission Electron Microscopy (TEM) [16-18]. SEM shows the surface details of samples treated by an etching and drying process, whereas TEM requires an embedding process. These procedures may lead to shrinking or cracking artifacts in the altered bonding structure [19]. The introduction of CLSM used in combination with optical microscopy, laser scanning, or a computerized imaging procedure, has provided a valuable new technique for visualizing of the bonding structure in dentin [20-22]. CLSM has the advantage of being a non-destructive form of imaging because drying of samples is rendered unnecessary, thereby preventing the formation of artifacts. Therefore, the CLSM method is well established in dentin bonding research.

Bonding resin techniques, such as resin coating [23], have recently been used as an alternative adhesive strategy. However, the use of bonding resin to strengthen teeth has not yet been reported. In the present study, an industrial bonding resin impregnation method appeared to be useful for tooth strengthening. Although further studies of the clinical durability and benefits of bonding resin in autologous tooth crown transplantation are needed, our results suggest that the method described herein will be useful in the future.

Based on the results of the present study, we conclude that impregnation with bonding resin strengthens teeth. Furthermore, the amount of impregnated resin may be influenced by these conditions and affect tooth strength.