To determine the prevalence of dyslipidemia and lipoprotein abnormalities among siblings of young acute myocardial infarction patients.

Introduction: Despite all available theoretical assumptions, there is no study defining the prevalence of lipid and lipoprotein abnormalities among siblings of young acute myocardial infarction (MI) patients. This is the first such study.
Methods: This was a case-control study. A total 110 siblings of young acute MI patients (Group A) and 50 healthy young controls (Group B) were studied for a duration of 2 years. Clinical profiles included age, sex, smoking, hypertension, diabetes mellitus, abdominal obesity and dyslipidemia for both cases and controls.The primary objective was to study the prevalence of dyslipidemia and lipoprotein abnormalities. The secondary objective was to study the prevalence of conventional risk factors among siblings of young (<45 years) acute MI patients.
Results: On analyzing lipid profiles, it was found that total cholesterol, triglycerides, low-density lipoprotein, ApoB100, ApoB100: ApoA-1 ratio, and lipoprotein (a) were significantly raised in Group A in comparison to Group B. On studying conventional risk factors, it was observed that history of smoking, hypertension, diabetes mellitus, and increased waist circumference were more prevalent in Group A in comparison to Group B.
Conclusion: Conventional atherosclerotic risk factors, lipid and lipoprotein abnormalities were significantly more prevalent in siblings of young acute MI patients in comparison to healthy controls and may be an answer to the possible cause of familial clustering in young MI emphasizing the importance of familial screening. Therefore, intensive efforts should be made to identify and alter modifiable risk factors in these cases.

Nowadays coronary heart disease (CHD) is the main cause of death all over the world due to sedentary lifestyle [1,2]. The age group above 45 years is the most widely affected by acute myocardial infarction (MI). However, nowadays due to stressful life attributable to psychological, social and financial constraints, persons below 45 years presenting with acute MI are no exception [3]. The main causes for increasing incidence of these events in the younger age group are physical inactivity, smoking, unhealthy diet, obesity, stressful life with overlapping appointments, and family history [4]. The cut-off age of 45 has been used in most studies to define young patients with MI and the same age criteria was used in this study [5].

Family and twin studies are consistent in showing the strong influence of genetic factors on premature coronary artery disease (CAD) [6,7]. Several prospective studies indicate that a family history of premature CHD is an independent risk factor even when other risk factors are taken into account [8-10]. The relative risk for CHD in first-degree relatives has been reported to be as high as 2–12 times that of the general population [11-13].

Familial clustering may be due to genetic resemblance between members of the family, common family environment, or a probable contribution of both factors. Members of a family will tend to share similar environmental factors such as occupational classification, diet, smoking, exercise habits, and psychosocial stress, which have been shown to be related to the incidence of ischemic heart disease. This will perhaps be true of siblings rather more than of parent and child [14].

A large US study of persons developing CHD before the age of 60 years showed that low-density lipoprotein (LDL) cholesterol concentration of>130 mg/dL was more than twice as common in asymptomatic siblings under the age of 60 years as in the population at large (38% vs. 16%) [15]. Analogous but much less pronounced differences were observed in the European Atherosclerosis Research Study (EARS) [16] which investigated young adults with a paternal history of MI before the age of 55 years. In this study the best lipoprotein discriminants were plasma ApoB100 and triglyceride concentrations, which were higher in those with a positive family history of premature CHD compared to age and sex matched controls.

Baseline clinical characteristics of siblings of young (age<45 years) acute MI patients were evaluated. Clinical profiles included age, sex, smoking history, hypertension, diabetes mellitus, abdominal obesity and dyslipidemia for both cases and controls. Smokers were defined as patients who either smoked a cigarette daily or with a history of smoking within 2 years before study inclusion. Non-smokers were defined as patients who had not smoked a cigarette in his/her life or had quit smoking at least 2 two years before inclusion in the study [17]. Hypertension was diagnosed in those patients adhering to anti-hypertensive medication or with either systolic blood pressure of ≥ 140 mmHg or diastolic blood pressure of ≥ 90 mmHg recorded at least twice during standard examination [18]. Diabetes mellitus was diagnosed in those patients with (a) fasting blood glucose of ≥ 126 mg/dL at least twice at admission; (b) 2-hour plasma glucose ≥ 200 mg/dL during an OGTT (75 g); (c) random plasma glucose ≥ 200 mg/dL with symptoms of hyperglycemia; (d) treatment with hypoglycemic agents or insulin; or (e) hemoglobin A1c (HbA1c) level of 6.5% (48 mmol/mol) or higher [19]. Central obesity was defined as per waist circumference measurements. Men and women with waist circumference measurements of>102 and>88 cm, respectively, were considered to have high waist circumference [20]. Dyslipidemia was diagnosed according to Adult Treatment Panel (ATP) III criteria. It was diagnosed if plasma lipid analysis showed one or more of the following: hypercholesterolemia (total cholesterol :≥ 200 mg/dL) and/or hypertriglyceridemia (triglycerides: ≥ 150 mg/dL), and low levels of high-density lipoprotein (HDL-C: ≤ 40 mg/dL in males and ≤ 50 mg/dL in females) [21]. LDL values were said to be increased if they were: (a) ≥ 100 mg/dL in presence of CAD or CAD risk equivalent; (b) ≥ 130 mg/dL in presence of ≥ 2 risk factors; or (c) ≥ 160 mg/dL in presence of 0–1 risk factors. Lipoprotein abnormalities were considered if ApoB100 was found to be>130 mg/dL, Apo A-1 was found to be<120 mg/dL in males and<140 mg/dL in females. The ApoB100: ApoA-1 ratio>0.6 and Lp(a)>14 mg/dL were considered to be significantly associated with increased risk of CHD. Criteria for acute, evolving, or recent MI was typical rise and/or fall of biochemical markers of myocardial necrosis with electrocardiographic changes indicative of ischemia (STsegment elevation or depression) [22].

Venous blood was collected from the antecubital vein of patients after overnight fasting. Individuals were seated for at least 5 minutes prior to phlebotomy to avoid hemoconcentration. 4 ml of blood was collected in a plain vial for routine biochemical investigations and extended lipid profile. Serum extracted after centrifugation was stored in aliquots at -20°C and not thawed till batch analysis for serum Apo A-1, ApoB and Lp(a) was completed. Analysis was done within 6 months as per stability suggested in the literature provided with the kit. Lipid profile, Apo A-1, ApoB, and Lp(a) testing and measurement was done by auto analyzer. Apo A-1 and ApoB measurement was done by Roche Tina-quaint Apolipoprotein A-1 reagent and Roche Tina-Quant Apolipoprotein B reagent using an immunoturbidometric assay on Roche/Hitachi 917 analyzer.

Statistical quantitative data were analyzed using the unpaired t-test or Mann-Whitney U test for comparisons of data between the different patient groups. For qualitative variables chi-square test or Fischer ’ s exact test was applied. A p-value of<0.05 was considered statistically significant. For statistical analysis Graph pad Instat 3 software system was used.

All data are expressed as number (percentage)

All data are expressed as mean ± standard deviation

Table 2: Lipid profile distribution among groups A and B.

Mean ApoB100 and Apo A-1 were significantly different among Group A and Group B. The ApoB100: Apo A-1 ratio was statistically higher in cases of Group A in comparison to healthy controls of Group B (p=0.004) as shown in Figure 1. 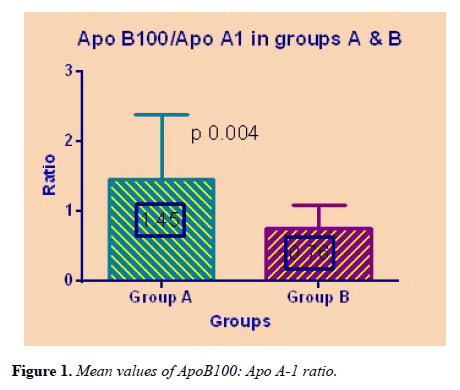 All data are expressed as mean ± standard deviation

Table 3: Apolipoprotein profile distribution among groups A and B.

In the present study, index patients up to 45 years of age were selected, according to criteria in literature, which considers a patient with acute MI young if he or she is less than 45 years old. To determine the actual prevalence of conventional risk factors, including lipid and lipoprotein abnormalities, 110 coronary disease-free siblings of 100 Indian patients who had documented acute MI before 45 years of age were studied. To compare the results with the general population, 50 healthy controls were selected. In this study, to minimize bias, both age and sex distribution was kept equal without statistically significant differences among cases and controls. Number of male patients were more in comparison to female patients in both the groups, approximately in 2:1 fashion.

Among risk factors, smoking continues to be a predominant risk factor among siblings in comparison to healthy controls. Majority of male siblings (brothers) were smokers in comparison to female siblings (sisters). Among other risk factors hypertension, diabetes mellitus and increased waist circumference were also significantly more prevalent in siblings than controls. Of the study population, smokers comprised 72% siblings, hypertensives comprised 42% siblings, diabetics comprised 30% siblings and 41% siblings had an increased waist circumference. These findings are consistent with the results of a study done by Becker et al. [23] to determine the actual prevalence of hyperlipidemia, hypertension and diabetes, and the awareness of these coronary risk factors in unaffected family members. 150 coronary disease-free siblings of 86 people who had documented coronary disease before 60 years of age were studied. With the use of nationally established recommendations for blood pressure and lipids, which are based on coronary disease risk curves, screening revealed that 48% of brothers and 41% of the sisters were hypertensive, 45% of brothers and 22% of the sisters had a lipid abnormality, 38% of siblings were current cigarette smokers and 4.7% were diabetic.

Similarly, Lp(a) values were also significantly raised in siblings in comparison to controls. Lp(a) was found to be above normal range in 60% of siblings in comparison to 38% in controls. Mean values of these parameters were significantly different in siblings than controls. Surprisingly, there was no significant difference among male and female siblings in relation to these parameters signifying that both sexes are equally at risk for future cardiovascular events in case of history of acute MI in their siblings at a young age and both brothers and sisters need equal attention in relation to risk factor modification and change in lifestyle. These findings are in accordance with the study done by Aila et al [26]. in who concluded that familial hyperlipidemia was twice and familial hypertension three times as common in case as in reference families; other risk factors were equally common in both. It is concluded that most of the familial aggregation of coronary heart disease is mediated by familial aggregations of hyperlipidemia and hypertension.

This study has a few limitations. The important ones which deserve mention are outlined. First is the study design. This was a case-control non-randomized study. Second is that incidence of risk factors for atherosclerosis were higher in siblings as compared to controls, which may adversely affect the lipid and lipoprotein abnormalities. So, a randomized study with matching atherosclerotic risk factor profile in siblings and control is needed to draw a definite conclusion. Last is the sample size. A larger number of cases is required to draw a definite conclusion on this point.

Lipid and lipoprotein abnormalities in the form of raising levels of total cholesterol, LDL cholesterol, triglyceridse, decreased levels of HDL cholesterol, increased Apo B: Apo- A1 ratio and Lp(a) were significantly prevalent in siblings of young acute MI in comparison to the general population. Similarly conventional atherosclerotic risk factors, smoking, hypertension, diabetes mellitus, and increased abdominal obesity were also found to be significantly more prevalent in siblings of young acute MI than the general population. These findings emphasized the importance of familial screening of CAD risk factors and may be an answer to the possible cause of familial clustering in young MI and an intensive efforts should be made to identify and alter modifiable risk factors in these cases. 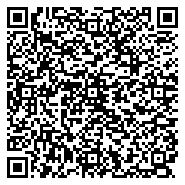