Time of PMSG administration: Effect on progesterone and estradiol concentration in synchronized ewes.

The objective of this study was to observe the effect of Pregnant Mare Serum Gonadotrophin (PMSG) administration time on progesterone (P4) and estradiol (E2) concentrations in synchronized ewes. The experimental animals used in this study were Cameroon hair sheep and Thai Long Tail wool sheep crossbreds. Controlled Internal Drug Release (CIDR) device was implanted intravaginally to 40 ewes for 11 and 13 days. Pregnant Mare Serum Gonadotrophin (PMSG), 200 I.U. was administered at CIDR withdrawal and 24 hours prior to CIDR withdrawal. Blood samples were collected between 3 to 4 day intervals for 6 weeks after CIDR implantation. The P4 and E2 blood plasma concentrations were measured by radioimmunoassay (RIA). Ewes that received PMSG at CIDR withdrawal gave significantly higher P4 and E2 concentrations as compared to ewes that received PMSG at 24 hours prior to CIDR withdrawal in both 11 and 13 days CIDR implantation. In conclusion, PMSG administration at 24 hour prior to or at CIDR withdrawal would affect the concentrations of blood plasma P4 and E2 in synchronized ewes and subsequently would affect the reproductive performance in ewes.

In small ruminants, estrus synchronization was achieved either by extending the cycle with exogenous progesterone or its analog progestagen or reducing the length of the luteal phase of the estrus cycle with prostaglandin (F2α) [1]. These synchronization regimes were orally implanted or intravaginal sponges insertion. These devices would exert negative feedback on Luteinizing Hormone (LH) secretion that inhibited the endocrine events and lead to the maturation of preovulatory follicles and ovulation [2].

The most general synchronization technique in sheep was progestagen intravaginal devices which was implanted for 12 to14 days, followed by administration of equine chorionic gonadotrophin (eCG). This method would synchronize estrus in cyclic ewes or induced and synchronized estrus during the anestrus period in sheep. This method of intravaginal progestagen was the most practical for sheep reproductive management programs, but the fertility rates were highly variable [3]. Titi et al. [4] reported that a combination of progestagen sponge with Gonadotrophin Releasing Hormone (GnRH) administration was effective in estrus synchronization and increased fecundity in small ruminants. The administration of GnRH in estrus synchronization technique could facilitate synchronized ovulation or luteinization of most large dominant follicles and initiated follicular growth [5].

Table 1: Estrus synchronization for 11 or 13 days of CIDR implantation with PMSG administration in the four groups of ewe

Statistical analyses on the concentration of estradiol and progesterone were performed on a microcomputer using Statistical Package for Social Science (SPSS) programme (version 20.0). Data were analyzed through analysis of variance (ANOVA) with significant difference level of P<0.05. 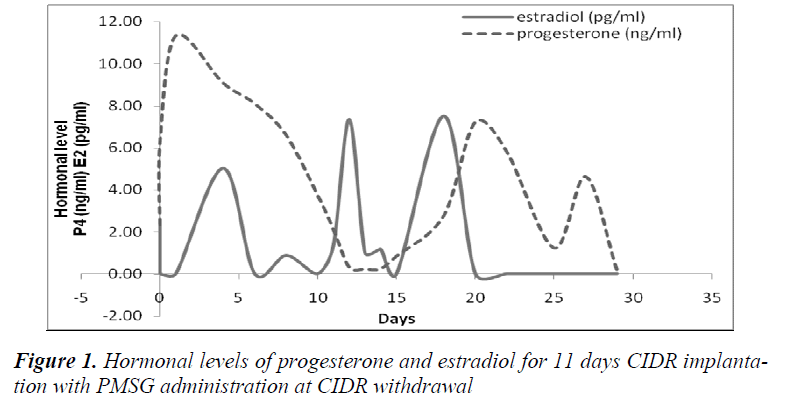 Figure 2: Hormonal levels of progesterone and estradiol for 11 days CIDR implantation with PMSG administration at 24 hours prior to CIDR withdrawal. 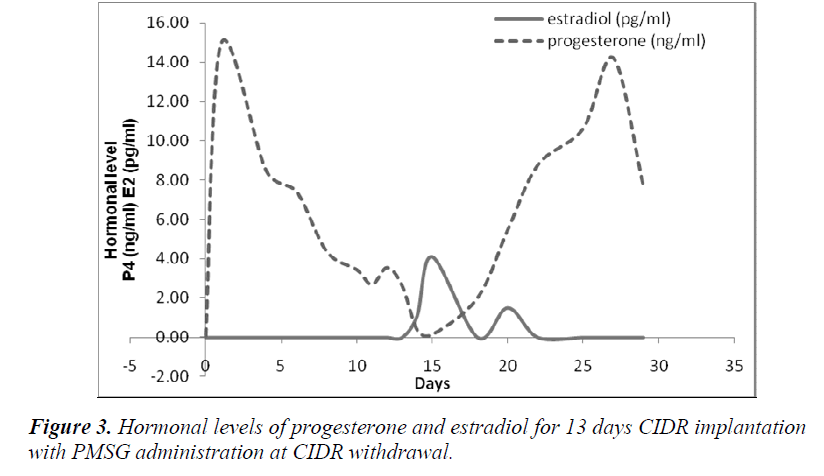 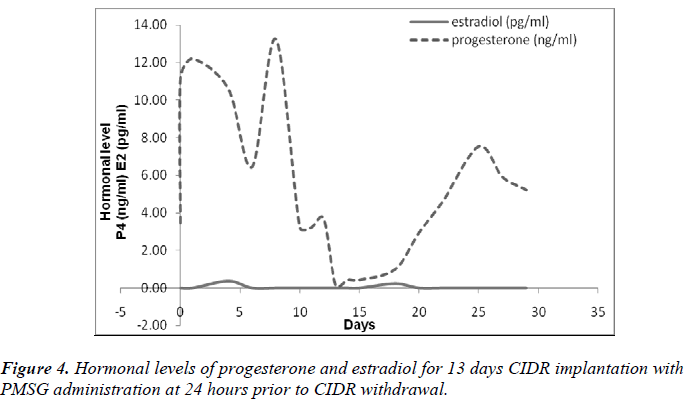 Figure 4: Hormonal levels of progesterone and estradiol for 13 days CIDR implantation with PMSG administration at 24 hours prior to CIDR withdrawal.

Intravaginal devices with progesterone or progestagens are the most commonly used procedures which can be combined with gonadotrophin hormone to increase ovulatory efficiency and ovulation rate. Present study showed significantly higher concentrations of P4 and E2 in both 11 and 13 CIDR implantation for PMSG administration at CIDR withdrawal as compared to PMSG administration at 24 hours prior to CIDR withdrawal.

It has been previously showed that eCG injection at 24 hours prior to the intravaginal sponge removal or at the time of removal had a desirable effect on lambing rate, multiple birth and fecundity rates of treated ewes compared to those received treatment at 24 hours after intravaginal sponge removal [8]. It has also been shown that a single dose of GnRH injection at 24 hours after CIDR removal could rise the number of embryos in multiple ovulation and embryo transfer (MOET) protocols [9,10]

In contrary, Mohammad Ali Sirjani et al. [11] reported that the lambing rate and litter size increased to ≥150% in ewes in which GnRH was treated at 48 hours after CIDR removal. Gonadotrophin Releasing Hormone (GnRH) injection may increase the number of ovulations and consequently, it leads to increase the lambing rate, litter size and multiple birth rates in synchronized ewes. However, there are the discrepancy results, which reported that GnRH administration at 36–48 h after intravaginal sponge removal did not increase the fertility and lambing rate in ewes [12,13]. It was reported that GnRH administration might induce a premature ovulation or less functional corpora lutea and with a subsequent reduced fertility [14]. However, Karaca et al. [15] found exogenous GnRH administration immediately prior to a short-term progestagen treatment (7 days) was able to increase the fertility rate, multiple births and litter size.

All treatment groups showed abrupt rise in P4 levels after CIDR implantation and sharp decline to basal values prior to CIDR withdrawal. Hussein and Ababneh [16] reported that this phenomenon would reset the hypothalamic- pituitary-ovarian to regress persistent follicles and recruit new healthy follicles. The E2 profiles recorded in the present work were characterized by 2 peaks. Such an increase in the E2 concentration during the early luteal phase has also been shown in a previous study [17]. In addition to the preovulatory peak in E2 concentration at the onset of estrus, a second peak of lower magnitude occurred 4–6 days later during the bovine and ovine ovulatory cycle [18,19]. Estradiol (E2) is considered as a good marker of follicular quality [20]. The number of large follicles and E2 concentrations were positively correlated during the estrus cycle.

In our opinion, time of PMSG administration would affect concentrations of P4 and E2 blood plasma and thus affect reproductive performance in ewes. More research should be carried out in this area to provide a better understanding in the endocrine aspects of reproduction in ewes. It is hoped that the results obtained from this current study will provide better understanding of the mechanism of hormonal control in ewes reproduction, thus enabling us to overcome many problems related to the abnormal reproductive status in sheep. Also, it may increase the success rate of animals undergoing advanced reproductive technology such as artificial insemination (AI), in vitro fertilization (IVF), embryo transfer (ET) and cloning.

The Authors declare that they do not have any competing financial interest.