Thirteen Polymorphic STR Loci in the HLA Region: can they Predict HLA Alleles in South Tunisia?.

In the HLA region, several microsatellites (Msats) also called Short Tandem Repeats (STR) were mapped. Msats are not themselves functional; however, their inherent polymorphism and linkage disequilibrium (LD) with HLA loci make them a robust disease-mapping tool in understanding susceptibility to autoimmune and infectious diseases. The aims of our study were to define a set of 13 STRs were evenly distributed in the HLA, to evaluate their LD with HLA alleles; and to test Msats ability to predict HLA typing. HWE was verified for all STRs except the TNFb and D6S1666 Msats. Regarding statistical parameters, we used LD and HSH analysis to ascertain the best MSAts for HLA prediction. A marker in strong LD with an HLA locus and with a low value of HSH is the most appropriate for predicting HLA alleles. For the HLA-A1-B52-DR15 haplotype, the combination of the alleles markers D6S265 (a10), D6S2810 (a7), STR-MICA (a6) and D6S2789 (a16) was necessary for haplotype prediction. In conclusion, for prediction accuracy we found that the positive predictive value (PPV), the probability of observing the particular HLA haplotype in the presence of a particular Msats allele, was the most relevant statistical parameter.

In the HLA region, several microsatellites (Msats) also called Short Tandem Repeats (STR) were mapped. It is estimated that there is a Msat in the Human Leucocytes Antigen (HLA) region every 30 kb [1]. In September 1999 [2], 155 polymorphic Msats were identified and published. In 2004, a project was carried out in collaboration between a French team (Toulouse) and a Japanese team to set up a nomenclature for Msats in the HLA region and to characterize Msats primers [3]. Recent studies of HLA Msats have furthered the understanding of the genetic organization and the extent and patterns of linkage disequilibrium (LD) within the HLA region [4].

Msats are not themselves functional, however, their inherent polymorphism and LD with HLA loci make them a robust disease-mapping tool in understanding susceptibility to autoimmune and infectious diseases [5] and in delimiting recombinations within the Major Histocompatibility Complex (MHC) [6].

The hypothesis is that STR markers can provide useful HLA haplotype information; as such information would be of value in unrelated bone marrow transplantation. The aims of our study were to define a set of reliable HLA-region Msat (13 STRs loci were evenly distributed in the HLA region, where STRMICA, D6S2810, C3-2-11 (D6S2701), D6S265 and D6S276 were located in the HLA class I region, D6S2789 (TNFd), STR TNFc, a and b, C1_2_C (D6S2800) in the HLA III region and D6S291, D6S1666 in the HLA class II region) (Figure 1), to evaluate their LD with HLA alleles; and to test Msats ability to predict HLA typing. 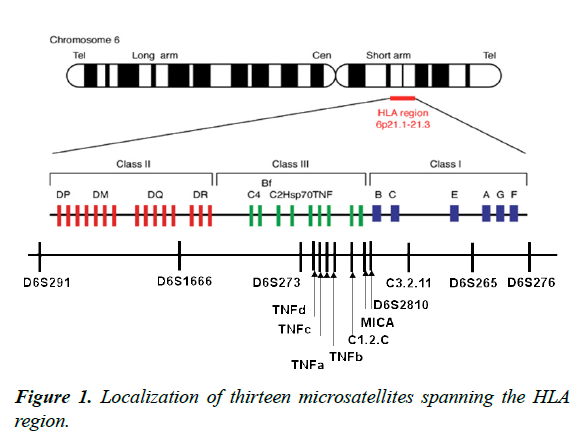 The study population consisted of 123 healthy unrelated individuals originating from the South Tunisia, and typed for HLA-A, HLA-B, HLA-C, HLA-DRB1, and HLA-DQB1 [7]

D6S291, D6S1666, D6S273, D6S2789 (TNFd), STR TNFc, a et b, C1_2_C (D6S2800), STR-MICA, D6S2810, C3-2- 11(D6S2701), D6S265 and D6S276 were selected from the dbMHC Msat resource (dbMHCMsat resource). The dbMHC Msat portal has been developed as an online database of MHC Msat markers by Gourraud et al. (available at http://www.ncbi.nlm.nih.gov/projects/gv/mhc/main.fcgi?cmd=init) [8]. Searching for Msats markers in dbMHC returns the following information: (i) the locus name and a graphic display of the location of each marker, (ii) a list of the primer pairs and the primer pair names, (iii) repeated motif and allele size range and (iv) a table that displayed physical mapping information. The Msats data obtained for the selected markers are summarized in Table 1.

All samples were electrophoresed on the ABI Prism_310 sequencer and analyzed using GENESCANv3.1.2. Allele assignment was based on the amplicon size (the number of base pairs: bp).

STR characteristics study Allele frequencies, expected numbers of genotypes, homozygotes, heterozygotes and PIC (polymorphism information content) as well as the Hardy– Weinberg equilibrium (HWE) were calculated using the Power Marker program. Linkage disequilibrium study Haplotype frequencies and LD were computed using the PyPop program. Patterns of overall LD were measured as Wn and D’. Both Wn and D’are standardized measures that range from zero to one, with higher values indicating stronger LD. While the two statistics are correlated, they are influenced differently by various aspects of the strength of LD, such as sensitivity to the number of alleles or estimation of low-frequency haplotypes.

The normalized frequencies for these haplotype specific STR alleles are

where k is the number of STR alleles observed on the specific HLA-AB- DRB1 haplotype, and h1, . . . hk are the frequencies of the four-locus STR–HLA-A-B-DRB1 haplotypes.

For the prediction of specific HLA haplotypes by STR alleles, frequencies for haplotypes consisting of HLA-A, HLA-B, HLA-DRB1, and one or more Msats were estimated.

Characteristics of the 13 STR

The highest level of polymorphism, measured by the number of alleles, was observed for C3-2-11 (21 alleles) and the lowest with the TNFc marker (tow alleles) (Table 2). At each Msats locus, one to four major alleles represented 50% of the total frequency. HWE was verified for all STRs (p non-significant), except the TNFb and D6S1666 Msats. The percentage of individuals homozygous for these two Msats was 59% for D6S1666 and 43% for TNFb.

LD between Msats and HLA 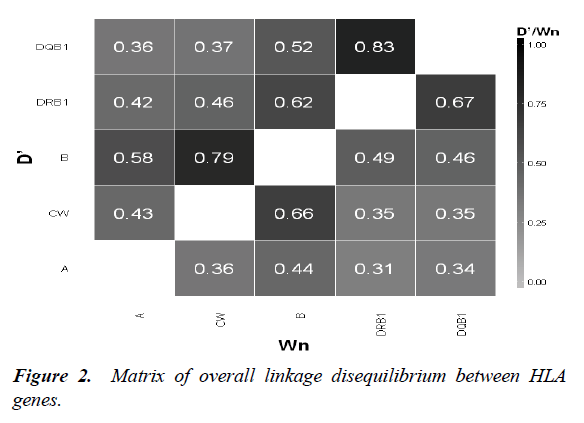 The HSH provides a summary of the distribution of Msats alleles of HLA-defined haplotypes and gives additional haplotype specific information about the diversity of the STR and how this diversity varies from one HLA-defined haplotype to another. Diversity of Msats among the six most frequent haplotypes in our group is displayed in Table 3. This table contains the overall heterozygosity (gene diversity) index and HLA-A-B-DRB1 HSH for each STR marker.

Finally the ability of markers to predict HLA-A1-B8-DR3 haplotypes, HLA-A2-B50-DR7 and HLA-A1-B52-DR15 were evaluated by the study of sensitivity, specificity, positive predictive value and negative predictive value presented in Table 4. Despite a sensitivity of 100% for D6S265 (a10) with HLA-A1-B8-DR3 and (a18) of C1_2_C with HLA-A1-B8- DR3, the alleles PPV, considered separately, were low.

In the current study, we investigated 13 STR markers located around or within the HLA-A, B, C, DR and DQ loci.

All markers were found to respond to HWE in our Southern Tunisian population except D6S1666 and TNFb. Deviation from HWE for the two latter Msats could be indicative of a mis identification of unamplified alleles. Msats respecting The HWE can be used in population studies and in Msat-disease association analysis.

In addition to the strong LD reported between the different HLA loci (B-C and DRB1-DQB1), we also found that the Msat markers nearest to the HLA loci were those with the strongest LD: HLA-A-D6S265, HLA-B-D6S2810, HLA-B-STR-MICA and HLA-DR-D6S1666.

Comparing our results with a study of Caucasian haematopoietic stem cell donors [10]. We found that some of Msats have the same strong DL: HLA -A-D6S265 and HLA-B-D6S2810. Regarding statistical parameters, we used LD and HSH analysis to ascertain the best MSAts for HLA prediction. A marker in strong LD with an HLA locus and with a low value of HSH is the most appropriate for predicting HLA alleles.

Markers in moderate or weak LD with HLA loci or with higher HSH will not be useful in screening for common HLA haplotypes. On the other hand, these markers may be useful for identifying regions in the MHC that may be relevant for donor matching in transplantation and in investigating potential disease susceptibility genes in addition to known HLA effects. For prediction Accuracy we found that PPV, the probability of observing the particular HLA haplotype in the presence of a particular Msats allele, was the most relevant statistical parameters. H-S [11] have established a three-microsatellite (D6S2666, D6S2665, D6S2446) haplotyping method that can serve as a surrogate for DRB1 genotyping with very good sensitivity and specificity for most of the major DRB1 alleles in Caucasian and Asian groups. A high degree of haplotype conservation was demonstrated in healthy controls as well as rheumatoid arthritis patients.

Besides Msats [12] employed SNP markers for Predicting Classical HLA Alleles in African, Asian and Caucasian groups. They defined a panel of ~100 SNPs typed across the HLA region for predicting both rare and common HLA alleles up to 95% accuracy. In their study, haplotype phase of trio data was used for reconstructing the HLA-SNP haplotypes. Underestimation of heterozygosity was the most important imitation of SNPbased method [13,14].

In conclusion, to refine the prediction accuracy, it is necessary to associate different Msats and SNP markers in a large cohort. Such an approach can provide a low-cost HLA-typing method that is useful in many clinical settings. 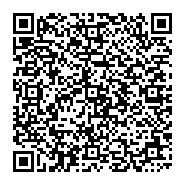