#These two authors contributed equally to this study.

Systemic Lupus Erythematosus (SLE) has a relapsingremitting course with disease activity flares over time. Flare is common, occurring in 65-70% of patients with SLE within 1 y even when they are receiving standard SLE therapy [1]. The environmental triggers for lupus flare, for example ultraviolet light and infection, were suggested to mediate the apoptotic and necrotic cells production [2]. SLE is characterized by a myriad of immunological abnormalities involving defective clearance of apoptotic materials [3]. The accumulated cellular remnants, including nuclear autoantigens and nucleosomes, might consequently change tolerance and lead to flare.

B-lymphocyte activity plays a pivotal role in the development and course of SLE. B-Cell-Activation Factor (BAFF) is an essential factor for B cell maturation, survival, proliferation and immunoglobulin class switching. Belimumab is a fully humanized monoclonal antibody that specifically binds to the soluble BAFF and prevents BAFF interaction with its receptors.

Belimumab was approved by the US FDA for lupus therapy in 2011. Supported by the randomized controlled trials, the addition of belimumab to standard therapy was confirmed to be effective in reducing SLE disease activity and delaying the time to lupus flares [4]. The longer term efficacy of belimumab as maintenance treatment to prevent lupus flares has to be established with extended observational studies [5,6]. As for the mechanism, previous study showed belimumab therapy reduced the number of circulating naive B cells, activated B cells and plasma cells, but not the number of circulating memory B cells [7]. However, the mechanisms other than Bcell depletion remain an open question.

Given PBMC’s availability from SLE patients and its extensive use in auto-immune disorders, we used PBMCs in the study. Here, we revealed suppressed responses of Peripheral Blood Mononuclear Cells (PBMCs) from lupus patients under belimumab treatment to the apoptotic cells. We also observed: (1) IFNα secretion was significantly decreased; (2) The deactivation of monocytes and T lymphocytes.

Five SLE patients enrolled in the present study visited department of rheumatology every 1 to 6 months in the West China hospital. Ethics approval for this study was granted by the Medical Ethics Review Board of West China Hospital, Sichuan University School. Informed consent was obtained from all study subjects. All studies were performed according to the Declaration of Helsinki.

All patients fulfil ≥ 4 of the 1997 American College of Rheumatology classification criteria for SLE. Flare was defined as an increase in SLE Disease Activity Index 2000 update (SLEDAI-2K) with score of ≥ 4 from the previous visit [8,9]. On top of background SLE therapy, they received belimumab at the dosage of 10 mg/kg to be given intravenously at 2 week intervals for the first three doses, followed by 4 week intervals.

For induction of apoptosis, Jurkat cells (5 × 106 cells/mL) were treated with 100 nM staurosporine (Beyotime, CN) for 24 h at 37°C in a humidified 5% CO2 atmosphere. Apoptotic and necrotic cell death were confirmed by staining with propidium iodide/annexin V-FITC (Figure 1). 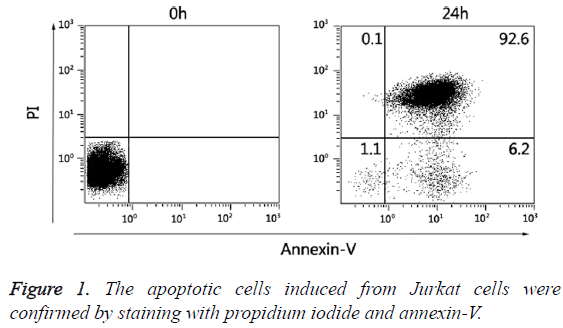 Figure 1: The apoptotic cells induced from Jurkat cells were confirmed by staining with propidium iodide and annexin-V.

Baseline demographics and disease characteristics of SLE patients were shown in (Table 1). Treatment with belimumab for 12 weeks reduced the disease activity. 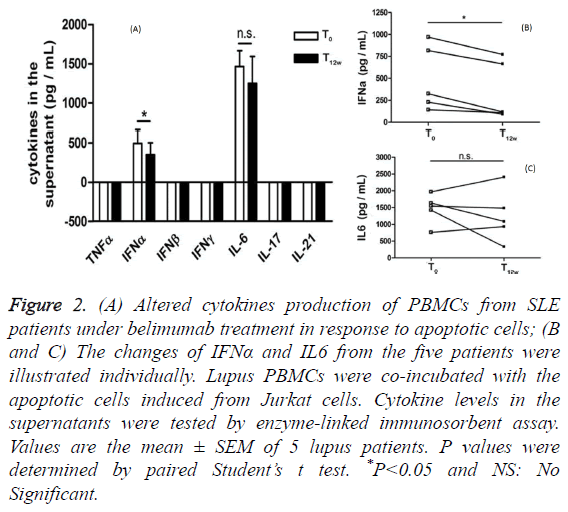 Figure 2: (A) Altered cytokines production of PBMCs from SLE patients under belimumab treatment in response to apoptotic cells; (B and C) The changes of IFNα and IL6 from the five patients were illustrated individually. Lupus PBMCs were co-incubated with the apoptotic cells induced from Jurkat cells. Cytokine levels in the supernatants were tested by enzyme-linked immunosorbent assay. Values are the mean ± SEM of 5 lupus patients. P values were determined by paired Student’s t test. *P<0.05 and NS: No Significant. 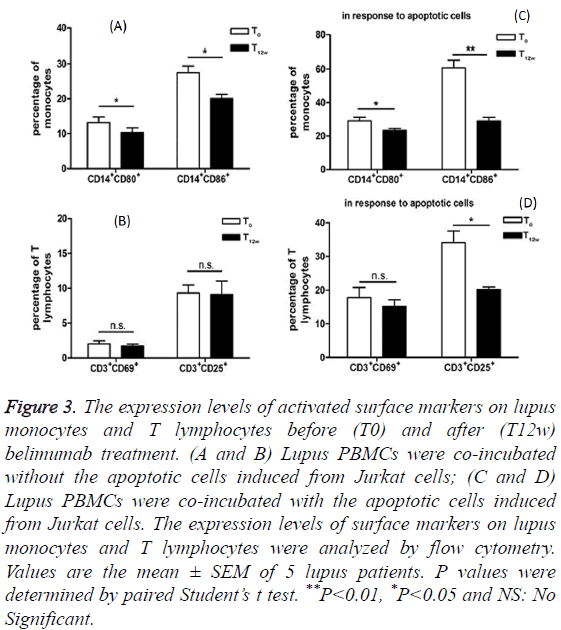 These five lupus patients with disease flare presented the improvement in disease activity and declined SLEDAI scores when they received belimumab therapy for 12 weeks. Interestingly, our data revealed that lupus PBMCs showed the suppressed response to the apoptotic cells co-incubation after belimumab treatment, especially IFNα secretion. This may provide a new perspective for understanding the mechanism of preventing lupus flare by belimumab.

Apoptosis plays a key role in pathophysiology of SLE [11]. When autoimmune B cells attack the body’s own tissues, they are normally undergoing apoptosis. In SLE, B cells acquired the ability to survive and proliferate, which protect them from cell death. Particularly, B-cell Activating Factor (BAFF) is required for the development and survival of B cells and BAFF is overexpressed in SLE patients [12]. Type I interferon’s (IFNs) plays an important role in the pathogenesis of SLE. There is cross-talk among type I IFNs, Toll-Like Receptors (TLR) and BAFF [13]. Several studies indicated that the presence of IFNα could influence the expression of BAFF. For instance, induction of BAFF expression was described in myeloid cells, such as Dendritic Cells (DCs) and macrophages, after in vitro stimulation with IFNα [14,15]. A recent study revealed that IFNα-treated SLE monocytes exhibited higher intracellular levels of BAFF, which was mobilized to the membrane rapidly and subsequently released [16]. However, excess BAFF could increase auto-reactive B-cell survival and proliferation, followed by elevating auto-antibodies production and forming immune complexes (ICs). SLE-ICs, especially interferonic ICs, may contribute to unwanted production of IFNα through TLR7/9 in plasmacytoid DCs. Thus, IFNα and BAFF are acting in a vicious circle. Treatment of SLE patients with anti-IFNα mAb could reduce BAFF expression in whole blood [17]. Our study further suggested that treatment of SLE patients with belimumab significantly reduced IFNα secretion in PBMCs upon recognition of apoptotic cells. Given expression of BAFF is controlled by IRF transcription factors and BAFF expression is directly induced by type I IFNs via IRF1 and IRF2, reduced IFN-α secretion may suggest there’s a feedback loop in IRF-IFNs-BAFF signalling [18]. IRF regulates BAFF expression via type 1 IFNs while IFN-α may also be regulated by BAFF when belimumab is present. In addition, levels of CD80 and CD86 dramatically decreased in lupus monocytes in response to co-incubation with apoptotic cells, after treatment with belimumab. The activation status of T lymphocytes showed the same tendency as well as monocytes. These two phenomena may be associated with the decreased level of IFNα.

In summary, our study indicated that PBMCs from the five SLE patients under belimumab treatment showed the suppressed response to the apoptotic cells. The samples size in this study is limited, but it provides clue of the possible mechanism of belimumab’s role in preventing lupus flare (other than B-cell depletion): antagonizing effects on the response to co-incubation with apoptotic cells, such as inhibiting IFNα secretion. Thus, further study with larger sample size is required to deepen our understanding of belimumab’s phamalogical actions. It’s also intriguing to explore whether other SLE drugs (such as hydroxychloroquine, azathioprine and cyclophosphamide) have similar actions to regulate response of cytokine secretion under apoptotic stimuli.

The work was supported by the grant (81172870) from the National Nature Science Foundation of China (NSFC).

The authors declare they have no conflicts of interest.