Objective: This research was to study the influence of the improved emergency treatment procedure on the therapeutic effect of thrombolysis on Acute Myocardial Infarction (AMI) patients.

Conclusion: The improvement of the emergency nursing procedure can enhance the efficiency of thrombolysis, shorten the length of hospital stays, reduce the recurrence rate and ultimately, reinforce the quality of nursing for AMI patients.

Acute Myocardial Infarction (AMI) is a critical and serious illness that’s commonly seen in the emergency department [1]. AMI, whose clinical features include acute chest pain and dynamic changes in electrocardiogram and myocardial enzyme is mostly found among the seniors and results in a relatively high mortality rate [2,3]. Intravenous thrombolysis in emergency treatment can facilitate the recanalization of coronary artery, prevent remodeling of the left ventricle [4], through which, patients’ cardiac functions and prognosis can be improved, and the short-term and long-term mortality rate can be reduced. Since thrombolytic theory manifests better effect when it is conducted earlier in the emergency department, enhancing the efficiency of thrombolytic treatment in the emergency department and fighting for the precious time for the patients is an important guarantee of raising the success rate of treatment and improving the patients’ prognosis. A scientific and reasonable treatment procedure plays an important role. As a method of improving the vulnerable spots and hidden dangers at work [5], the improvement of the treatment procedure aims at better serving the patients and reinforcing the patients’ experience of seeking medical advice [6].

The treatment work is conducted by doctors, assisted by the group leader of nursing and responsible nurse. The horizontal axis of the emergency treatment path is the time of hospitalization, projects and requirements of clinical nursing path, variation records (yes or no, causes), signature of nurse. The nursing with AMI thrombolysis is divided by the duration: 1 min of nursing includes having the patient lie on the back, loosening the collar and trouser belt, and starting oxygen inhalation and antiplatelet therapy; 5 min of nursing includes the setting of above two intravenous lines, retaining the blood preparation, conducting electrocardiogram, blood pressure and blood oxygen monitoring, taking chest radiography by the bed, putting nitroglycerine under the patient’s tongue, and determining whether intramuscular injection of 2 mg of morphine or 50-100 mg of pethidine is needed according to the condition; 30 min of nursing includes indispensable thrombolytic therapy. Throughout the whole process, psychological counseling should be conducted on the patients according to their mental state, health education should also be implemented, and the state of illness and complications must be closely observed [13].

Hospitalization time and expense, and recurrence rate in hospital 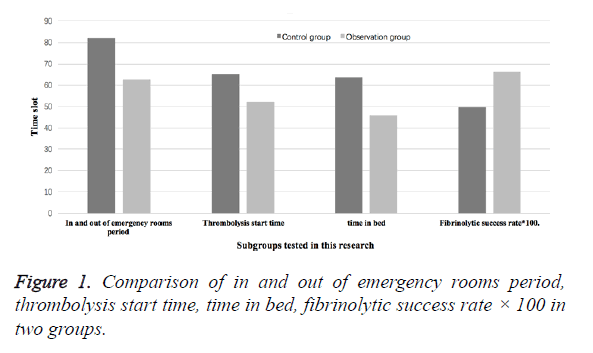 Figure 1. Comparison of in and out of emergency rooms period, thrombolysis start time, time in bed, fibrinolytic success rate × 100 in two groups. 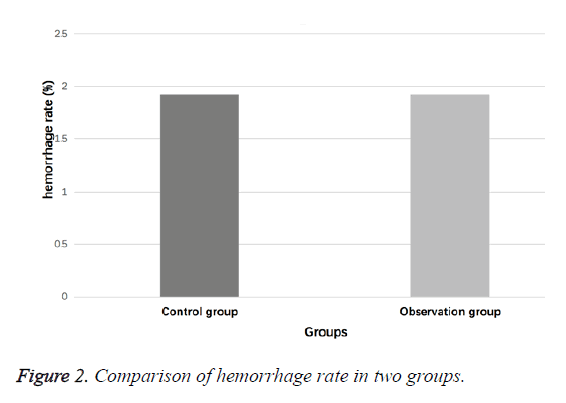 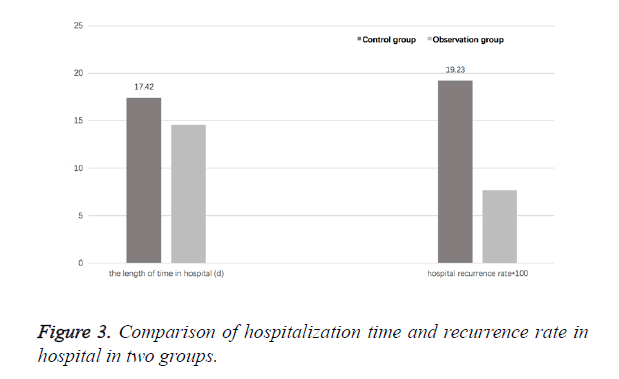 Figure 3. Comparison of hospitalization time and recurrence rate in hospital in two groups. 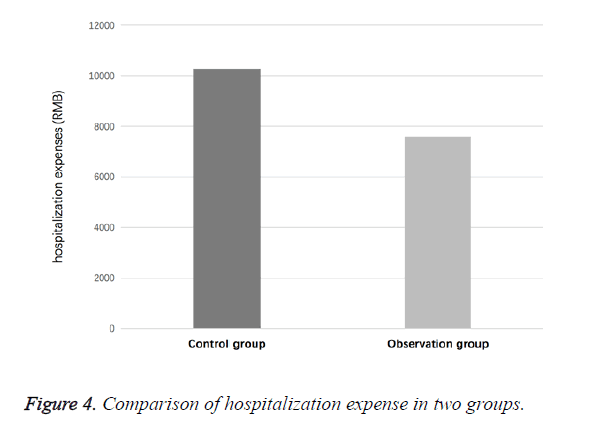 AMI is a result of atherosclerosis of coronary artery, which leads to thrombosis, which blocks the lumen of coronary artery and triggers myocardial ischemia [16,17]. It manifests certain features, such as acuteness in attack, rapid progress of illness and high mortality rate. There are nearly 3 million new AMI patients in China every year. Besides, with the increase of patients with coronary heart disease in recent years, the morbidity has been rising. The death of AMI patients can be mainly attributed to organ failure or arrhythmia and cardiac rupture thus incurred. Thrombolytic therapy is the easiest and most effective treatment for AMI. It realizes recanalization of the blocked coronary artery through thrombolysis, and reperfusion of the ischemic myocardium [18,19]. Thus, blood vessels are promptly rebuilt which can rescue the failing myocardium and improve patients’ cardiac function. It is reported that myocardial cell under the endocardium manifests necrosis within 18 min of coronary artery occlusion [20,21], and within 3 h, the area of necrosis reaches two thirds, and transmural myocardial necrosis may be incurred within 6 h. In the early stage of quick thrombolytic therapy, facilitating myocardium reperfusion is the key to saving the patients’ life. However, the ultimate success of AMI treatment through thrombolytic therapy derives from not only the time window, but also the normalized nursing procedure.

It is reported that the improvement of nursing procedure for emergency treatment towards a more normalized, programmed and standardized direction can enhance the level of specialized nursing for emergency treatment. Our department has improved the nursing procedure of thrombolytic therapy for AMI. It is suggested by the result that in comparison with the control group, the observation group manifests a relatively shorter length of time in the emergency room, thrombolysis treatment and bed rest; and higher success rate of thrombolysis than the control group, and there is significant difference between the two groups (p<0.05). On one hand, the implementation of overall responsibility rationing under hierarchical management motivates different layers of nurses at work and reinforces their sense of responsibility. On the other hand, the continuous shift arrangement reduces the number of shifts, which made it convenient for nurses to comprehensively grasp the patients’ state of illness and eliminate hidden dangers in nursing. Thanks to the formulation of CPN for emergency treatment, the rescue and nursing of AMI patients has become more predictable, planned and scientific. The next step of rescue and treatment measure can be predicted by time. In this way, instead of blindly executing the doctor’s advice, nurses will take the initiative to participate in the nursing, which avoids the waste of time caused by various factors, creates conditions for the prompt recanalization of relevant infarcted artery and the rescue of more myocardium, and shortens the time that patients spend in the various links.

The result of this research also suggests that the improved emergency treatment procedure in the observation group enhances the recurrence rate of AMI, and reduces the hospitalization time and expense for the patients, which manifests a significant difference from the control group (p<0.05). After the improvement of the nursing procedure, nurses can provide proactive and well-organized service in accordance with a unified schedule, which effectively reduces the recurrence rate of AMI and the occurrence of other adverse events, and lays a foundation for patients’ rehabilitation. In conclusion, the improvement of emergency treatment procedure can enhance the efficiency of thrombolytic therapy for AMI, shortens the hospitalization time and reduces the recurrence rate.