In Crimean-Congo Hemorrhagic Fever (CCHF), the main target of the virus is endothelial cells, monocytes and hepatocytes. The virus in these cells leads to the development of capillary vessels dysfunction, which induces clinical and pathological changes during the disease. Increase in capillary permeability and coagulation dysfunction constitute a tendency to bleed. In the current study, we aimed to investigate the relationship between VKORC1 and bleeding tendency in CCHF. Forty-eight consecutive patients with a laboratory-confirmed diagnosis of CCHF were treated with blood products, and 37 healthy volunteers as the control group were prospectively enrolled into the study. The DNA was obtained from each sample using PCR amplification method, and VKORC1 1639 G>A gene polymorphisms were scanned in the DNA samples. In CCHF group of patients with bleeding VKORC1 gene were analyzed. Normal genotype was detected in 5 (22.7%) patients, homozygote mutation was detected in 2 (9.1%) patients and heterozygote mutation was detected in 15 (68.2%) patients, respectively. Furthermore, the G allele frequency was statistically higher in study group (51 [53%] vs. 27 [36%]) (p<0.005). It seems to be that VKORC1 gene A allele frequencies saliently higher in CCHF. This might be associated with increased bleeding risk in CCHF. Analyzing of VKORC1 gene polymorphisms could help in the risk stratification of patients with CCHF.

Crimean-Congo hemorrhagic fever (CCHF) is a zoonotic viral disease caused by a tick-borne virus of the genus Nairovirus [1]. CCHF has a fatality rate of 3–30% of cases [2], and the pathogenesis of the disease is not well understood. The most common cause of death in patients with CCHF are multiple organ failure (cardiac, cerebral, hepatic, renal and/or pulmonary), intracranial hemorrhage and other serious bleeding from internal organs [3,4]. In severe cases, death occurs as a result of disseminated intravascular coagulation and circulatory shock. Systemic inflammatory reactions also occur during hemorrhagic manifestations [5,6].

The enzyme vitamin K epoxide reductase (VKORC1) reduces vitamin K 2,3-epoxide to the biologically active vitamin K hydroquinone, which catalyzes the production of the blood-clotting proteins II, VII, IX, and X by carboxylation of glutamic acid residues [7,8]. In patients with CCHF, VKORC1 gene mutations inhibited the formation of coagulation by preventing activation of the Kvitamin.

This study was designed to determine whether VKORC1 gene polymorphism could be associated with CCHF and/or its complications such as bleeding.

Forty-eight consecutive patients with a laboratoryconfirmed diagnosis of CCHF and 37 healthy volunteers as the control group were prospectively enrolled in the study between January 2011-October 2011. Informed consent was obtained from all participants. Patients who are using anticoagulant drugs and increases the liver enzymes were excluded. Nobody were not died in the CCHF group. This study was performed C type natriuretic peptide studied samples of patients in different laboratories. The diagnosis of CCHF was confirmed by positive qualitative polymerase chain reaction (PCR) test in the Virology Laboratory of the Refik Saydam National Hygiene Center of the Turkish Ministry of Health. The TaqMan-based one-step reverse transcriptase-PCR assay was used to detect CCHF viral RNA.

Total genomic DNA was extracted from the 200 μl of peripheral blood samples using the Nucleospin blood (250) DNA isolation procedure (Macherey - Nagel, Germany). Regions encompassing VKORC1 -1639G>A mutation was simultaneously in vitro amplified and biotinlabeled in a single (multiplex) amplification reaction (Vienna Lab, PGX-Trombo StripAssay, Austria). PCR was performed in a Perkin Elmer 9600 and the profile consisted ofan initial melting step of 2 minutes at 94°C; followed by 35 cycles of 15 seconds at 94°C, 30 seconds at 58°C and 30 seconds at 72°C; and a final elongation step of 3 minutes at 72°C. The mutation analysis was performed by StripAssay technique (Vienna Lab, PGXTrombo StripAssay GmbH, Austria) which is based on the reverse-hybridization principle automatically. The normal, heterozygous and homozygous mutant/nonmutant genotype profiles of each gene were determined using the enclosed CollectorTM sheet.

The SPSS 15.0 (SPSS Inc., Chicago, Illinois, USA) package was used for statistical analyses. Results are presented as mean±SD and interquartile ranges, or as percentages and numbers, for categorical data. Continuous variables that were normally distributed were analyzed with the Student’s two-tailed t-test, and unequally distributed variables were analyzed with the Mann–Whitney U-test. Categorical data and proportions were analyzed using the x2- test. A p-value less than 0.05 was considered statistically significant. 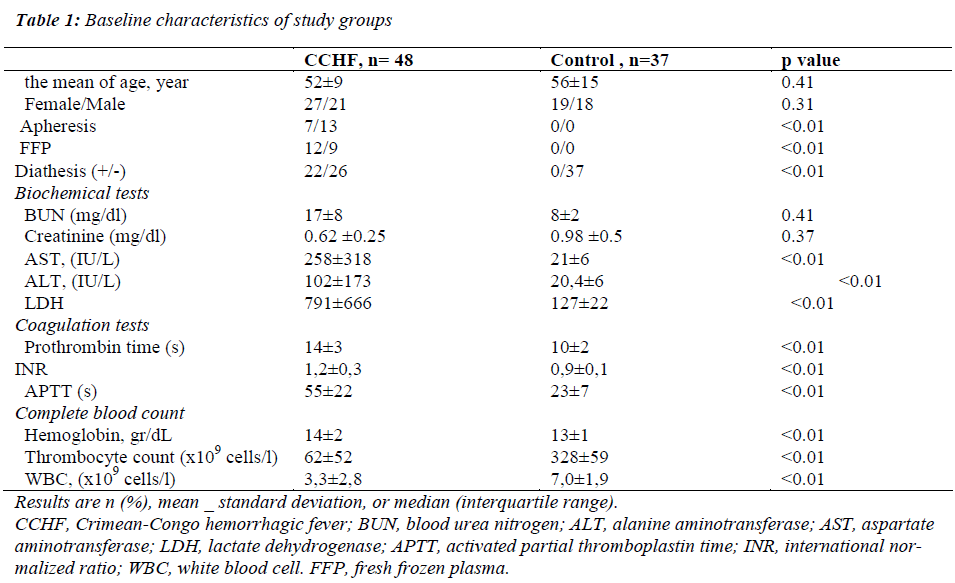 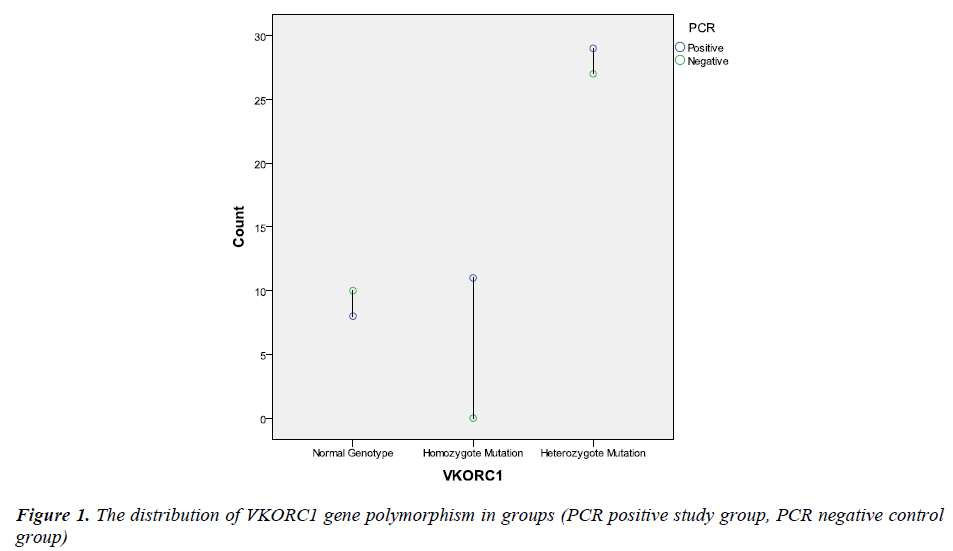 Table 2: The distribution of the VKORC1 polymorphisms and allele frequencies

Homozygote polymorphism was identified more effective on bleeding in the multivariate logistic regression analysis . But it was not statistically significant (p> 0.05).

To the best of our knowledge, this study is the first in the published literature to investigate the VKORC1 gene polymorphisms on the CCHF. We found that VKORC1 gene mutation was significantly increased in CCHF patients. Moreover, A allele frequencies were higher in CCHF patients. Furthermore, even after controlling for confounding parameters, we found that VKORC1 gene polymorphisms were strongly associated with bleeding tendency in patients with CCFH. Previous studies have reported that decreased levels of thrombocytes and fibrinogen, and increased levels of white blood cells, AST, alanine aminotransferase (ALT), creatine kinase, LDH, and soluble urokinase plasminogen activator receptor, as well as a prolonged APTT, are associated with a poor outcome in CCHF patients [10-13]. Our findings of higher ALT, AST, and LDH levels in patients with more severe disease are in accordance with those of previous studies [10-12].

Vitamin K is fat soluble vitamin that plays a pivotal role in homeostasis. Some of the haemostatic factor activities are dependent for K vitamin (Factor II, VII, IX and X and also protein C,S) [17,18]. Vitamin K deficiency can cause bleeding in an infancy or geriatric population. Nevertheless, it is not neglected in clotting disorders. Vitamin K epoxide reductase (VKOR) is an integral membrane protein that is an important regulatory of K vitamin metabolism. VKORC1 gene regulates these mechanisms and might be lead to clotting disorders [19,20]. Major bleeding cases were also reported with vitamin K antagonism in previous reports [21]. So, CCHF might have a significant effect on vitamin K. Nabeth and colleagues reported that bleeding was stop after K vitamin supplementation in their case [22]. There was not any definitive report about vitamin K replacement in CCHF. Nevertheless, it was mentioned some vector base reports [23]. The obtained results could be noted as VKORC1 gene mutation, K vitamin and CCHF might have been related with each other.

The specific mechanisms underlying the pathogenesis of CCHF infection have not been clearly explained. Endothelial cells and mononuclear phagocytes are major targets for the CCHF virus [24]. In particular, infection of the endothelium has an important role in the pathogenesis of CCHF. Endothelial damage contributes to hemostatic failure by stimulating platelet aggregation and degranulation, with consequent activation of the intrinsic coagulation cascade [25,26]. Furthermore, it is probable that the endothelium plays a role in the pathogenesis of CCHF through the secretion of cytokines and other inflammatory mediators [24]. Recent studies have demonstrated that serum levels of tumor necrosis factor alpha, interleukin-1, and interleukin-6 are higher in fatal than nonfatal CCHF cases [27,28]. On the other hand, in CCHF patients, tolllike receptors can potentially be related to the natural course and/or severity of the disease, as described in a recent paper [29].

There are some limitations of the current study. First this was a single-center study and it represents data from a tertiary care center. Furthermore, viral load measurements would have provided more insight with regard to the VKORC1 mutation. However, the central laboratory does not provide quantitative results with the confirmation of CCHF in our country.

Within the light of our study, we think that normal allele of VKORC1 could potentially identify those with mild progression of the disease. In addition, we believe that the polymorphism of VKORC1 could be helpful for the selection of patients for aggressive treatment and intensive care unit admission. At the other hand vitamin K concomitant treatment strategies might be beneficial for CCHF. Our results should be supported with further large cohort studies.

The authors thank the Refik Saydam Hygiene Center of Ankara, Turkey for testing the serum samples, and our colleagues from the Turkish Ministry of Health for their contributions.

No conflict of interest and no funding source to declare.

The study was performed in accordance with the Declaration of Helsinki for Human Research, and was approved by the institutional ethics committee