The use of semen parameters to decide between conventional in vitro fertilization (IVF) and IVF combined with intracytoplasmic sperm injection (ICSI).

Background: In vitro fertilization (IVF) with intracytoplasmic sperm injection (ICSI) has been increasingly used to treat an expanding subset of infertile patients; However, IVF/ICSI is not without inherent risks. The goal of this study was to determine if pre-wash and/or post-wash semen parameters are useful in determining the best method of fertilization between IVF and ICF/ICSI. Methods and Findings: A retrospective chart review was performed on 211 cycles performed at the UHealth Reproductive and Fertility Center at the University of Miami Hospital between the years of 2008-2014. 126 of those cycles were performed with ICSI and the remaining 85 were performed with conventional IVF. The volume, concentration, and motility for each semen sample were measured. These semen parameters were used to calculate total motile count (TMC), volume (ml), concentration (million/ml), and motility (percentage). This was done in both prewash and post-wash samples. We compared patient characteristics, pre/post-wash parameters, and outcomes for IVF with conventional fertilization vs. IVF/ICSI. The main outcome studied was fertilization rate. A receiver operating characteristic (ROC) curve analysis determined that a post-wash threshold of 25 million TMC achieved a 70% fertilization rate in conventional IVF patients. This rate is comparable to that achieved with ICSI. Conclusion: There is evidence to show that pre-wash and post-wash parameters of total motility count of sperm can be used to make decisions regarding use of conventional fertilization versus ICSI in patients undergoing IVF.

In vitro fertilization (IVF) was first used in the 1970s in women with tubal factor infertility, and as IVF techniques have improved, it has been shown to be an effective treatment for infertility due to several other factors [1]. While IVF had improved fertility rates across several subgroups, couples with male factor infertility did not have the same success rates [2]. To overcome this barrier, intracytoplasmic sperm injection (ICSI) was developed in 1992 for those with male factor infertility [3]. It was also used in couples with fertilization failure in previous IVF cycles but no detectable abnormalities within semen parameters [3]. Several studies have supported the use of IVF/ ICSI with male factor infertility [2]; However, increasing rates of successful fertilization with ICSI have encouraged physicians to broaden its use to patients with non-male factor infertility, history of multiple IVF failures, poor quality oocytes, low oocyte yield, advanced maternal age, prior fertilization failure with conventional IVF, PGD and unexplained infertility [3]. Despite its increasing popularity, IVF/ICSI is not without risks. At the cellular level, it is speculated that injection of the oocyte may damage the ooplasm or meiotic spindle apparatus [4]. Similarly, sperm carrying DNA anomalies or structural defects may be unknowingly injected. Recent studies have reported statistically significant increases in birth defects with IVF/ICSI compared to conventional IVF [3]. Kissin et al. performed a study that suggested that the incidence of diagnosed autism in ART-conceived children during the first 5 years of life was higher when ICSI was used when compared to conventional IVF [5].

In those for whom IVF is indicated, a procedural decision must be made between conventional IVF versus IVF/ICSI. Currently, evidence-based algorithms to make that decision are lacking. Further studies are needed to explore parameters that may be used to assist the physician in selecting the appropriate method. The goal of this study is to determine what pre-wash and/or postwash semen parameters are valuable in predicting fertilization in patients undergoing assisted reproductive technology and to assist in deciding when ICSI would be indicated.

A retrospective chart review was performed on 211 IVF cycles at the UHealth Reproductive and Fertility Center at the University of Miami Hospital between the years of 2008-2013. 85 cycles were performed with conventional IVF, and 126 cycles were performed using IVF w/ICSI. All patients selected were required to be less than 35 years old. Couples with male factor infertility were excluded from this study. All cycles underwent IVF using GnRH antagonist down regulation protocols. Couples underwent embryo transfer on day 3 or day 5. Additionally, there were no selection criteria based on number of prior cycles. Patient demographics, as well as FSH levels, maximum estradiol levels, number of oocytes, and fertilization rate were compared between the two groups. Semen parameters including volume (ml), concentration (million/ml), motility (percentage) and total motile count (TMC) were calculated for both the prewash and post wash specimens. Fertilization was achieved using either ICSI or conventional IVF. Normal fertilization was determined by the presence of two clearly distinct pro-nuclei (2PN). Fertilization rate was calculated as the percentage of oocytes fertilized per cycle with the appearance of two-pro-nuclei.

Pearson partial correlation coefficients were then used to assess the association between semen parameters and fertilization rates. P-values <0.05 were determined to have statistical significance. Logistic regression analysis was performed thereafter to evaluate the contribution of post-wash TMC for the prediction of fertilization rate in conventional IVF.

In comparing the patients of the conventional IVF to ICSI group, there were no statistically significant differences in the following parameters: Female age, BMI, FSH, maximum estradiol concentrations, and number of oocytes retrieved (p=0.91, p=0.50, p=0.49, p=0.24 respectively) (Table 1). In addition, there was no significant difference in number of oocytes retrieved.

Based on these values in the conventional IVF group, an attempt was made at determining a cut-off for the post-wash TMC which would give the best prediction for fertilization rates in the non-ICSI group. A receiver operating characteristic (ROC) curve analysis determined that a threshold of 25 million TMC achieved a 70% fertilization rate. This rate is comparable to that achieved with ICSI (Figure 1). 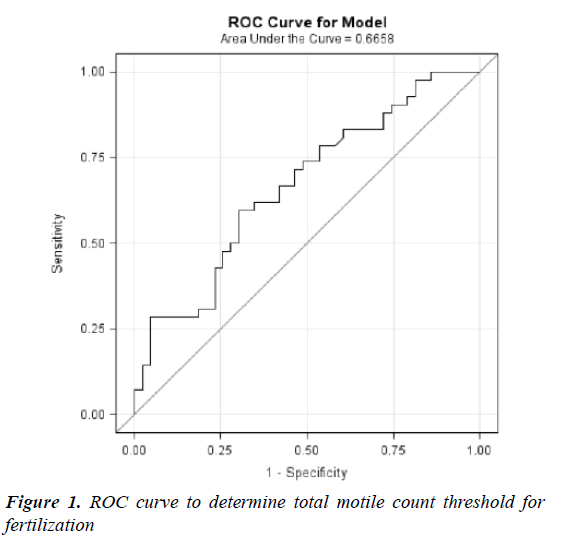 Several studies have established the efficacy of ICSI in male factor infertility [2]. However, many centers have resorted to using ICSI for other indications. Although fertilization rates may be increased with the use of ICSI compared to conventional IVF, the known birth defects that may be caused using ICSI cannot be overlooked [4]. For this reason, it may be inappropriate to make ICSI the standard of care for infertility cases. Additional parameters to successfully use IVF without ICSI are needed.

Several studies have attempted to use sperm parameters to determine when intrauterine insemination (IUI) would be indicated vs. IVF; Others attempted to conclude what sperm parameters would indicate ICSI is needed. More recently, studies have examined sperm function to create guidelines for different assisted reproductive technology techniques. Sperm parameters (volume, concentration, motility, and total motile count) are still some of the most frequently used criteria in predicting fertilization rate. For patients with borderline semen parameters, the cutoff values used for conventional IVF versus ICSI are mostly practice based.

Van Voorhis et al. examined the correlation between TMC and the efficacy of achieving pregnancy either through IUI or IVF [6]. The author concluded that average total motile sperm count of 10 million or more may be a useful threshold value for decisions in treating patients with IUI vs. IVF/ICSI.

Few studies have explored the use of sperm parameters to determine a cutoff rate for ICSI. Kastrop et al. proposed a maximum motile count of 1 million harvestable motile spermatozoa per sample under which ICSI should be performed [7]. Verheyen et al. used a lower limit of half a million progressive motile sperm after preparation. Their study showed a fertilization rate of 1.9% and 4.6% with conventional IVF and ICSI respectively, while the implantation rates were similar at 50% and 44% [8]. Similarly, Johann et al. showed that postwash total progressively motile sperm cell count (TPMC), was a good predictor of total fertilization failure (TFF) [9]. They demonstrated that a post-wash TPMC of <1.1 × 106 cells resulted in a risk of TFF of >25%. They thus concluded that if post-wash TPMC is known and TFF is expected, one may offer ICSI prior to ovum pickup.

While our study focused on sperm parameters as tools to determine fertilization, other studies explored sperm function that may aid the clinician in decision making. Bungum et al. performed a study on sperm chromatin structure assay (SCSA) and the outcome of IVF and ICSI ([10]. The results of SCSA were shown as DNA fractionation index (DFI) and highly DNA stainable (HDS). Their study demonstrated no statistical difference between the outcomes of IVF versus ICSI in the group with DFI <27%. However, once DFI >27%, ICSI results were significantly better when compared to IVF. Another study by Kovacs et al. was performed to determine the ability of a hyaluronic acid binding (HA-binding) assay to predict spontaneous fertilization during IVF [11,12]. In this study, IVF vs. ICSI fertilization rates and embryo development were based on 3 HA-binding cut-offs (<60%, 60-80%, >80%). They showed that HA-binding was unable to assist with selecting a method of fertilization when it was used as a “screening” method. Furthermore, HA-binding did not predict spontaneous fertilization in patients with unexplained infertility.

Since we have studied descriptive semen parameters to assist in the decision-making process between IVF and IVF with ICSI, there is an opportunity to perform further studies to explore functional parameters that may determine what method is most effective. Another weakness of the study is its retrospective nature. A retrospective study is subject to biases such as selection bias. As in our study, the selection of individuals is done in a way that does not allow for proper randomization. Thus, it is possible that our selected population may not represent the true population. This may alter the data in such studies so that the conclusions are not accurate.

The use of ICSI as a default IVF procedure may be inappropriate owing to the known increased probability of birth defects compared with the procedure of conventional IVF. Our study offers evidence-based guidelines for selecting couples in which conventional IVF may be considered, while maintaining the fertilization rates typically observed with ICSI. Furthermore, the choice of conventional IVF generally reduces birth defects, laboratory time, and costs associated with assisted reproductive technology. 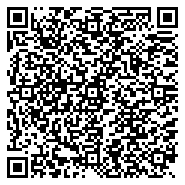