The use of dietary supplements by professional athletes

Professional athletes are exposed to everyday intensive physical strain. In order to provide for the energy demands of the organism, the athletes consume various food supplements (FS) [1]. The substances incorporated in FS implemented in sports could be classified in two different large groups: ingredients banned by WADA and ingredients permitted for use [2,3]. In spite of the fact that the market offers numerous permitted supplementary products, marketed as FS, their administration is not absolutely safe and hides certain real risks for the sportsmen because the post-production FS quality and quantity control is not mandatory unlike that on medicinal products. This is the major factor underlying the alarming reports published by numerous researchers revealing undeclared substances in FS [4-13]. The lack of obligatory analytical control and the liberal regulation policy on FS can cause: incorporation of deliberately undeclared substances; accidental pollution during production (accidental mixing of banned substances and the supplement) or false products.

Most often the undeclared substances in FS are anabolic steroids, sibutramine [14,15] and others that can cause serious health effects on the cardiovascular, central nervous, endocrine and genital system. The risk for the consumer of content of hormonal substances could be present in non-hormonal products, such as vitamins, minerals, amino acids and others, as the current registration and production regime is liberal. Qualitative and quantitative analyses are recommendable but not mandatory in practice. The consumers of this group of products are not protected because of the absence of analytical control.

The World Anti-Doping Code outlines that each athlete is obliged to ascertain that no banned substance has entered into his organism. He/she is personally responsible for any banned substances found in his/her sample.

It is well known that 44% of the positive doping samples established by the UK Anti-Doping Organization follow the administration of food supplements containing banned ingredients. The Winter Olympic Games in Sochi evidenced 2631 doping tests, 7 of which showed a positive result. The athletes supported the thesis that those results were caused by intake of food supplements [16].

The above cited considerations focused our interest and attention on assessment of FS intake administered by our professional athletes.

The aim of the present research was to assess the intake of the most popular food supplements used in professional sport and to make a structural analysis of the phenomenon.

A specially designed questionnaire was used to convey an anonymous survey in the period 1st March 2017-1st May 2017 of a random sample of 66 professional athletes from the following sports-football, basketball, box, karate, kick box, MMA, judo, weight lifting, body-building, tennis, rowing, athletics and power-lifting. The survey covered 10 women and 56 men. The athletes answered 21 questions. The participation in the questionnaire survey was voluntary and anonymous. The sample was heterogeneous by age and education degree. Comparative, structural and graphic analyses were conducted.

The age of the selected sample varied from 18 to 40 y, mean age 26.31 y. The prevailing disciplines were body building, tennis and power-lifting (Figure 1). 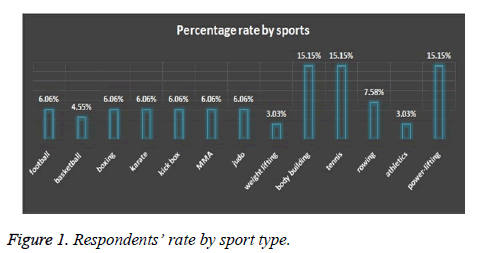 All respondents were convinced that their diet was very important for their sports results and thus they had consumed food supplements during the past 6 months.

Аmino acids had the largest consumption rate among FS-85%; followed by proteins-85%; magnesium-82% and creatine-73%. The intake of basketball players and boxers was almost the same. All of the studied basketball players consumed amino acids, proteins, creatine and magnesium. The same was the rate of boxers that included amino acids, proteins, creatine, magnesium and tribulus. 75% of boxers also take isotonic beverages.

The greatest number of food supplements was consumed by weight lifting athletes (10 types of FS daily). The supplements included glutamine, caffeine, FS for joints support, creatine, protein, magnesium and amino acids. Those FS were used by all inquired athletes (100%) practicing this sport.

All karate athletes covered by this survey used magnesium. A great part of them-75% also supplemented their diet with protein, tribulus and multivitamins.

The majority (90%) of the tennis professionals drank isotonic solutions, magnesium, multivitamins and 10% of them reported consumption of testosterone stimulators.

All power-lifting athletes declared the use of protein and amino acids.

The large number of FS consumed by the athletes outlined the necessity of a more careful selection of the used formulations and more serious control on athletes’ diet exercised by coaches and dieticians.

In order to fulfil the tasks of the survey it was important to answer the question “Where do athletes purchase their food supplements?” Healthy foods stores and stores for sports supplements were the most popular among FS consumers covered by our survey (90.91%). The athletes’ responses showed that the number of sports professionals preferring internet FS suppliers increased constantly at a high rate (65.15%) and the number of those preferring pharmacies as a place to buy the preferred FS and consult a specialist was decreasing (16.67%).

The published scientific evidence revealed that more and more patients suffered from undesired side effects due to FS intake, thus, the rate of side effects was also a target of our survey. The results showed that 13.64% of all inquired athletes had experienced undesired effects. The most frequent side effects were provoked by proteins (67%), caffeine (22%) and yohimbine (11%). Proteins had caused irritation of the gastrointestinal tract and yohimbine and caffeine-tremor and elevated pulse rate.

Most used FS by professional athletes are presented on Figure 2 (results from total 66 respondents). 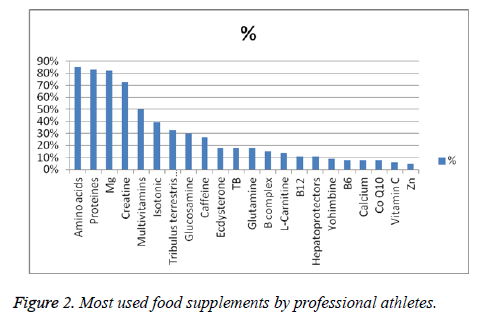 The majority of professional athletes (68.18%) supported the opinion that there was a health risk due to the presence of undeclared substances in the FS formulation. It is, though, alarming that one third of the respondents could not answer the question or were convinced that FS were absolutely safe for their health.

A substantial number of the respondents (84.85%) have reported that they had access to information on anti-doping programs and prevention. The greatest share of the athletes (77.27%) followed the instructions supplied by the sports dietician.

In order to satisfy the energy demands of the organism the athletes need to consume various food supplements and to follow a specific dietary regime enabling their quicker recovery in the time between exercises and competitions, to reduce fatigue and improve their performance.

The results of the survey confirmed that professional athletes consume large amounts of food supplements daily. We found that the athletes are fully informed about the benefits provided by the intake of those products but were not well aware of the health risk hidden in some formulations and accepted them as safe products. The lack of mandatory analytical control on FS could cause unfavourable health effects. The enhanced regulatory requirements to FS are of crucial significance for consumers’ safety.