The unwell child presenting with respiratory symptoms for a prolonged period of time - A unique case with review of the associated literature.

Background: Bacterial infection with associated empyema is the commonest cause of pleural effusion. The likely pathogens to be associated are Streptococcus pneumoniae, Streptococcus pyogenes and Staphylococcus aureus. Clinical signs of pneumonia without any signs of respiratory compromise can be treated with empirical antibiotics. However, if the infection does not settle and there is progressive worsening of clinical signs with persistent pyrexial, it is imperative that the unwell is referred to the paediatric unit for further evaluation.
Introduction: In our study we present a 2-year-old previously well girl presenting with a 2- week history of respiratory symptoms with intermittent pyrexia and loss of weight. On examination there was evidence of reduced air entry on the left lung field with increased work of breathing. Initial CXR indicated a complete whiteout of the left lung field. There was a concern of pleural effusion secondary to an empyema or a possible underlying malignancy. She subsequently underwent Ultrasound and Computed Tomogram of the thorax which confirmed left sided pleural effusion. She subsequently underwent tube thoracostomy having being intubated and ventilated and pleural fluid confirmed a diagnosis of empyema. She was treated with antibiotics with tailored sensitivities.
Discussion: Early detection of potential respiratory complications is paramount to the nonpaediatric practitioner. Awareness of the traffic light system and the associated appropriate intervention reduces both morbidity and mortality. There are limited studies in the paediatric management of empyema and the results from adult population cannot be extrapolated for use in the paediatric patients.
Conclusion: Although the vast majority of respiratory illnesses are viral in aetiology, bacterial infections when present can lead to significant complications unless detected early. It is imperative to recognise and realise that the paediatric population can compensate satisfactorily through the initial stages of significant physiological derangement. The mainstay treatment of uncomplications pleural effusion is through tube thoracostomy and systemic antibiotics.

1. The relative haemodynamic stability present in paediatric population despite of significant underlying pathology.

2. Gaining awareness of the likely possibility of a similar diagnosis in a child not improving despite of simple measures.

3. Although a large proportion of fever in children is viral in aetiology, being aware of the appropriate time frame to refer to paediatric facilities to reduce morbidity and morbidity.

Cough and difficulty in breathing are common problems in young children. The causes range from a mild, self-limited illness to severe, life-threatening disease. Most episodes of cough are due to the common cold, each child having several episodes a year. The commonest severe illness and cause of death that presents with cough or difficult breathing is pneumonia, which should be considered first in any differential diagnosis. A child with persistent cough and fever for more than 2 weeks and signs of pneumonia must be monitored properly. Here, we present a 2-year-old girl presented to our Emergency Department with a 2-week history of cough, variable temperature and possible weight loss.

We present a 2-year-old girl presented to our Emergency Department with a 2-week history of cough, variable temperature and possible weight loss. She had been initially seen at her local primary care facility where a possible diagnosis of viral illness was made. On presentation to the Emergency Department she was noted to be dyspnoeic with a respiratory rate of 56 breaths/minutes an oxygen saturation of 97% on room air, was noted to be persistent tachycardia between 170-180 bpm. She was also noted to be pyrexial at 38.5 degrees Celsius. 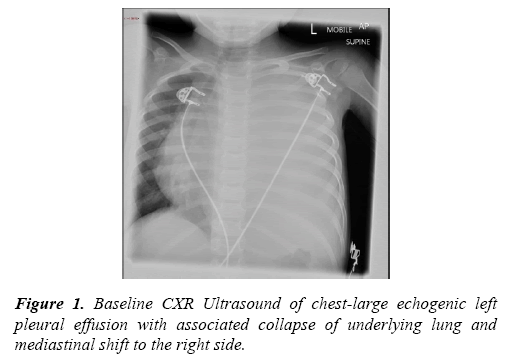 Figure 1. Baseline CXR Ultrasound of chest-large echogenic left pleural effusion with associated collapse of underlying lung and mediastinal shift to the right side. 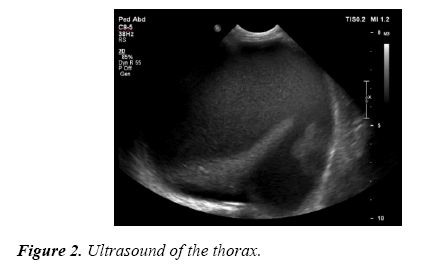 Figure 2. Ultrasound of the thorax.

The initial CXR was noted to show a complete white out of the left side without any signs of overt respiratory distress present, she was treated with abx, blood tests were sent including blood cultures. Due to ongoing pyrexia and persistent tachycardia, broad spectrum antibiotic and intravenous fluid resuscitation was performed. She was subsequently to the local Paediatrics unit for further evaluation. There were concerns of possible large left sided empyema or possible malignant left sided pleural effusion. Ultrasound of the chest revealed a large left sided pleural effusion with associated collapse lung. Following a period of stabilisation, she was transferred to the paediatric intensive care unit (PICU).

She subsequently under computed tomogram of the thorax which revealed fluid around the left lung with significant mediastinal shift without airway compromise.

She was subsequently taken to Theatre, intubated and ventilated and two left sided pleural drains were inserted (Figure 4) and a volume in excess of 1 litre of pus was drained and subsequently returned to PICU. 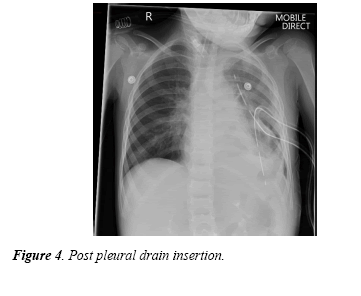 Following this she was extubated 2 days post insertion of the drain, in total of excess of 2 litres of fluid was drained from the pleural chest drains. She received antibiotics initially through the intravenous route and subsequently received oral antibiotics. The chest drains were duly removed. She was observed on the ward for a period of 5 days with regular monitoring of oxygen saturations and markers of infection and a repeat CXR was performed (Figure 5). 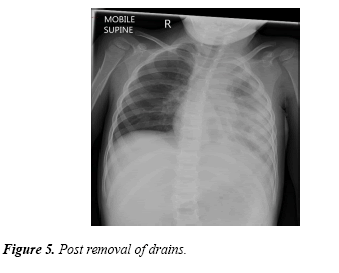 Unfortunately, during this period of time, she developed chicken pox and was subsequently treated through oral medications. There were no associate complications noted within this period. Following a period of observation, she was discharged home with written advice and appropriate safety netting from the Paediatric Consultant. She is due to have a repeat CXR at 6 months to assess for radiological resolution. Investigations

Initial CXR-Left-sided white out with evidence of mediastinal shift to the right side.

Sputum culture - No growth of organisms, acid fast bacilli noted to be negative

Bacterial infection with associated pleural empyema is the most common cause of pleural effusion in the paediatric population. The management of empyema in children different from that of in adults and results from adults cannot be extrapolated to children. Adults have underlying pulmonary conditions that complicate the management whilst children who develop empyema are previously healthy.

The options in the management in children range from systemic antibiotics [1] to tube thoracostomy to invasive cardiothoracic procedures. Randomised controlled trials have shown no proven benefit of fibrinolysis in the length of hospital stay. Studies comparing video assisted thoracoscopic surgery (VATS) alone with tube thoracostomy and urokinase [2] did not show any improvement in length of hospital stay, need for additional intervention and the 6-month radiological outcome. It has been noted that for early uncomplicated pleural effusions neither treatment is unlikely to be superior.

The British Thoracic Society (BTS) guidelines [3] for the treatment of pleural space infection in children advises use of fibrinolytic agents for complicated parapneumonic effusions and only advising surgery in those patients not responding to the fibrinolytic agents.

The recommendations from NICE Clinical Guidelines 160 (1.4.3.1) group suggest that in the clinical signs of pneumonia or bronchiolitis, a chest X-ray added no benefit for the management.

The RCPH and NICE has revised the traffic light system [4] for identifying risk of serious illness and the identifying the need to refer to paediatric services.

Based on the above system our child would have features that would classify into both the amber (intermediate) and red (high risk) category. The persistent pyrexia for ≥ 5 days, >40 breaths/min at age >12 months, heart rate >140 beats/minute age 2-5 years would be the amber features.

The red risk feature would the ill looking child to the healthcare professional. The guidance further states if there are any amber features present that safety net is essential or referral to specialist paediatric care. The safety net would include the guidance:

1.Providing parent or care with written and/or verbal written information

3.Arranging with appropriate follow up from an out of hours perspectiveThe guidance as a whole is focussed on infants less than 3 months of age and for those of less than 1 year of age.

Paediatric patients can tolerate significant derangements in pulmonary physiology without decompensating. The early recognition of the acutely unwell child is imperative and includes the referral to paediatric practitioners. Safety netting should always be carried out and is particularly important if the underlying cause of fever has not been ascertained. For simple respiratory tract infection CXR is not clinically indicated, however the assessing clinician needs to be aware of the likely complication. The mainstay of uncomplicated empyema is systemic antibiotics with drainage of the same. 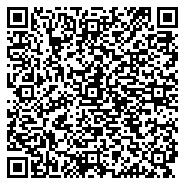