Purpose: Xenografts can be used in dentistry and medicine for both clinical and experimental purposes. The goal of the investigation was to observe the short-term bone building outcomes of two xenografts (Gen Os and Gel 40) in the cranial bone defects in rats.

Methods: Twelve rats were divided into two groups randomly, and a total of 24 parietal bone defects were created on the parietal bones. The symmetrical defects were in the critical size 5 mm and circular, which were treated with Gen Os in group 1, with Gel 40 in group 2, and symmetrical defects left empty as the controls. Rats were sacrificed 40 d after surgery, and the block sections, including the defects, were removed. The bone formation was assessed both histologically and histomorphometrically.

Results: There was more bone building in the test groups when compared to the controls (p<0.05). Besides, no difference was seen between the two test groups (p>0.05). A significant difference was also found among the three groups regarding the inflammation scores (p<0.05).

Conclusion: Within the limitations of the study, it can be concluded that both materials were osteoconductive, and more bone building was proved in the Gel 40 group.

Currently, more investigations are being carried out to find the ideal material to support the bone repair or regeneration in bone defects [1-5]. Autogenous grafts, allografts, xenografts, and synthetic materials (HA; TCP, biphasics) are used widely in the treatment of periodontal defects, implant surgery, and in the defects in medicine which occur due to trauma, tumours, or infections [5]. Although the autogenous bone grafts are gold standard, they have some problems and limitations such as donor site morbidity and the resorption rate. Due to these problems, the allografts, xenografts and synthetics can be considered as an alternative method. The xenografts are good osteoconductives, but can cause immunogenic reactions [6,7].

Xenografts are very known and generally derived from animal origin. These act as scaffolds for the ingrowth of osteoblasts, and ensure the space for the new bone [8-10]. Moreover, they are highly attractive since they carry minimal risks of contamination from infectious diseases, do not compromise the patients remaining tissues [11], and also owing to their physico-chemical properties similar to those of the human bone, these natural bio-materials show great osteoconductive characteristics [12].

Recently, Gel 40 was tested on rabbits, and showed that it enhances the new bone building limited [13]. Additionally, both Gel-40 and Gen-Os were tested in rat cranial defects for a long term observation period, and Gen Os was seen to be more osteoconductive when compared to Gel-40 [14].

We aimed in the present investigation to assess the short-term effects of Gen-Os and Gel-40 xenografts on bone healing in experimentally created parietal bone defects in rats.

Twelve Wistar albino rats weighing between 250-310 g were used. The investigation was approved by the Ethical Committee for Experimental Animals (2011-259).

A combination of ketamin (Ketalar, Parke-Davis, Berlin, Germany) and xylazine HCL (Rompun, Bayer, Leverkusen, Germany) was used for the anaesthesia of the rats. After shaving and disinfecting the dorsal part of the cranium, a linear 15 mm incision was performed on the dorsal cranium. The skin and periosteum were dissected so that both parietal bones could be seen. Then, two symmetrical, full thickness, and circular defects (5 mm diameter) were created on both parietal bones on each rat using a trephine bur under saline irrigation. The rats were randomly divided into two groups, and the defects (n=24) were treated with an application of particular Gen-Os (Group 1), Gel-40 (Group 2), and symmetrical defects left empty as controls. After the application of the grafts, the periosteum and soft tissues were repositioned and sutured. A suitable antibiotic and analgesic were used after the operation for the control of infection and pain during the healing period which was uneventful and had no complications such as infection, or convulsions.

The rats were sacrificed after 40 d, and the hard tissue samples were fixed with 10% phosphate buffered formalin solution for 48 h, then decalcified with 10% formic acid for 2 we. Samples were rinsed under tap water, and sections with a 4 μm thickness were taken in a sagittal plane at the midpoint of each sample for routine Hematoxylene-Eosine (H&E) staining from paraffin blocks. The histopathological evaluations were performed under a Leica DM 4000 B light microscope (Leica Microsystems GmbH, Wetzlar, Germany).

Semiquantative evaluation [15] was made for inflammatory cells adjacent to defect area by two experienced pathologists with a 40X magnification as follows.

Grade 0: when no or only rare lymphocytes;

Grade 1: when the inflammatory infiltrate was less than 25%

Grade 4 (intense): when the inflammatory reaction was present in >75%.

The ratio of the defect area filled with the new bone was given in %. Each sample was evaluated and a large magnification 200X received. New bone filling ratio was calculated as follows: New bone defect filling=area/new bone trabeculaenon calcified connective tissue.

a) Group 1: In the peripheral site of the defects, there were lamellar bone and faddly bone marrow tissue. New bone formation was detected in the defect area. The graft particles were present in almost all the defects. They were encapsulated with a fibrous tissue layer. Foreign body giant cells were not seen. Besides, the inflammation rate was minimal, and there was no abscess formation in view. No full closure was detected in any specimen (Figure 1). 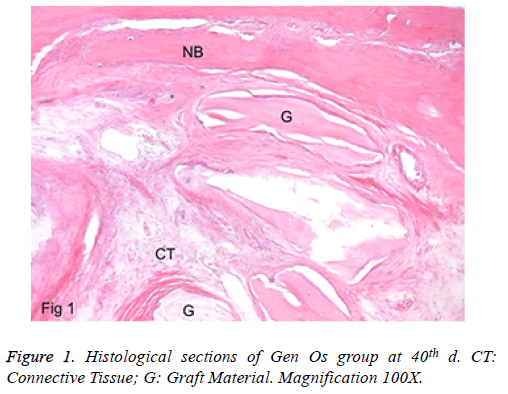 b) Group 2: A new bone formation was found at the defect border. The connective tissue was also in the defect area, which contained more cellular. More resorption of the gel graft existed, and inflammation was observed. Excluding one section, no foreign body giant cell was found. Besides, an abscess formation was also not seen (Figure 2). No full closure was detected in any of the specimens. 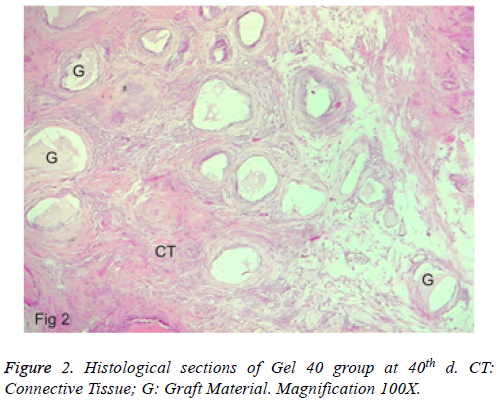 c) Controls: In sections where the defect areas were seen clearly, those were the ones filled with fibroblastic granulation tissue. Minimal bone building was detected at the defect border. Around the newly formed bone trabeculae, there were osteoblastic arrangements. Moreover, a minimal inflammation and chronic inflammatory cells in the inflamed area were found (Figure 3). No full closure of the defect was detected in any of the specimens. 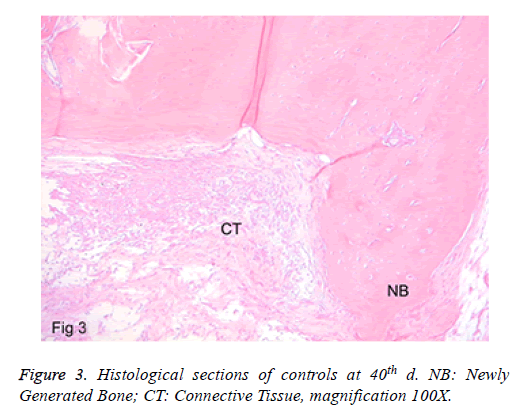 There was a statistical difference among these three groups. Groups 1 and 2 were significant compared to controls (p<0.05). Besides, no difference was found between Groups 1 and 2 regarding bone building (p>0.05, Table 1).

Table 2. Inflammation scores of the groups.

One of the ways for testing the bio-materials is by applying them in prepared critical-sized defects on the cranial bones in the rats. As is known, the critical sized defect is one which cannot heal spontaneously without any osteopromotive material [16,17]. The size of these defects in the rats can be varied, but we selected 5 mm and this fulfilled our aims as revealed previously [18,19]. Recently, there have been some similar studies conducted that are shown in the literature, but our study seems to be the first attempt which assesses these different xenografts in rat critical-sized cranial bone defects, which reflects the short-term results. The physical forms used in the present study were gel and particular. Both were easy to applying into cranial defects. However, there were some limitations. The number of rats and lack of the presentation of the amount of remained graft and the graft resorption.

The literature has shown that available xenografts are rarely tested in the cranial defects of animals [20-22]. Generally, they were used for various purposes clinically [22-24], and sometimes in different defects of the body experimentally [25,26]. They have an impact on bone formation, but sometimes immunological reactions can be [7].

In the present study, two different xenografts were tested histologically and histometrically in order to present the bone healing results more accurately. The short-term period was chosen for evaluating the early bone healing. In group 1 there was limited bone building, but it was more than in the controls. In addition, a remaining graft was seen and a minimal graft resorption was detected. These results are similar to other studies that were similar to ours. Inflammation was also found, and this was showed in a study which could be indicative of a host reaction to this inert material [27]. The newly formed bone was lower than the Gel 40 group. Conflicting results were shown in a similar study [13].

In the analysis of group 2, there were more bone building scores when compared to the other groups. Moreover, a mild inflammation, and a lot of graft resorption were observed. The inflammation rate was greater than G1 and the controls. These can be attributed to the physico-chemical properties of the material and the duration of study. However, other related factors remained unclear. In both test groups, we did not assess the resorption rates of the bio-materials. In short, both the biomaterials seem osteoconductive and biodegradable. In addition, the control specimens showed a minimal bone building score. Generally, the defects were filled with fibrovascular connective tissue, and also showed an inflammatory reaction. Moreover, since no full closure was detected in any specimens, it can be argued that the defects fulfilled the critical size defect properties. This study also revealed that these both xenografts are biocompatible and osteoconductive.

Recently, the Gen Os and Gel 40 were tested by Develioglu et al. [14], in critical sized defects in rats longitudinally. The investigation showed that the bone formation was more in the Gen Os group when compared to Gel 40. Moreover, in contrast, the Gel 40 group showed lower bone formation and more unresorbed graft. Our result of the Gel 40 group was not similar to this study and probably the different results can be dependent on various factors such as physico-chemical properties of bio-materials and defect wound conditions and also probably the lack of a barrier membrane on the defects. Similar findings were found in an experimental study with a different gel biomaterial [28]. Moreover, the controls showed minimal bone building. In the present study, there was no difference between the two test groups regarding bone building. This can be explained with the difference in the two graft materials and short-term observation period. In addition, in the past, the Gel 40 was tested in a study on rabbit maxilla [13]. The results showed that it has good effects on bone regeneration and there is resorption after an 8 w observation period. Our findings regarding Gel 40 were similar.

In conclusion, within the limits of the short-term study, it can be concluded that the bio-materials used in the present study are both osteoconductive, and a greater bone building was observed in the Gel 40 group. However, further detailed studies are needed to prove their effects on bone regeneration and clinical suitability.