Objective: Angiogenesis is essential for bone remodeling and regeneration. We previously showed that 3 months after transplantation of mesenchymal stem cells (MSCs) into a bone defect area, significantly more regenerated bone was present on the MSC side than on the control side. On the side transplanted with MSCs, the number of blood vessels was significantly higher. Therefore, during the remodeling process, MSCs, which are necessary for regenerating bone, were involved in bone regeneration through angiogenesis in the transplanted area. In addition, MSCs produce Vascular Endothelial Growth Factor (VEGF). Therefore, we investigated the influence of differentiation of MSCs on the expression of VEGF.

Methods: We investigated how changes in osteogenic differentiation of MSCs affect VEGF gene and protein expression and how co-culture with Human Umbilical Vein Endothelial Cells (HUVECs) affects gene expression in MSCs. We also determined the role MSCs play in the transplanted area, and the effects on HUVEC morphology when co-cultured with MSCs.

Results: VEGF gene and protein expression in undifferentiated MSCs was higher than in differentiated MSCs. VEGF gene expression in MSCs co-cultured with HUVECs was higher than when MSCs were cultured alone. In co-cultures of MSCs and HUVECs, a lumen-like structure was observed on the 3rd day of culture, and then several luminal structures were observed later.

Conclusion: MSC transplantation may contribute to angiogenesis via production of VEGF.

Mesenchymal stem cells (MSCs) are undifferentiated cells that can be easily harvested and separated from bone marrow or adipose tissue. MSCs differentiate into not only osteoblasts, chondrocytes, and adipocytes but also into cells that are found in multiple human tissues and organs such as myocardium, liver, nerve, and vascular endothelial cells [1-3]. Therefore, MSCs have been the focus of attention in regenerative medicine. In the area of hematopoietic stem cell transplantation, promotion of engraftment and reconstruction of the hematopoietic system after transplantation of MSCs are expected due to the hematopoietic supporting ability of these cells [4].

In our previous study, we cultured and transplanted MSCs and carbonated hydroxyapatite particles into a bone defect area and observed that early bone regeneration occurred in the presence of transplanted MSCs [5]. Another study showed that when a tooth was moved to a site of bone that had been regenerated by MSCs and carbonated hydroxyapatite particle transplantation, the movement was the same as in normal bone [6]. Thus, normal bone remodeling appears to occur in regenerated bone.

The most prominent stage of bone regeneration is angiogenesis, which is critical for most life processes prior to regeneration, tissue development, and repair. MSCs express high levels of Vascular Endothelial Growth Factor (VEGF) [13]. Among VEGF isoforms, VEGF-A is the most important in angiogenesis [14]. However, few studies have examined VEGF expression by MSCs in vitro. Vascular endothelial cells also develop into blood vessels, a process that involves complicated steps of elongation, branching, and lumen formation. Therefore, we speculate that MSCs may influence lumen formation by vascular endothelial cells. Thus, we examined interactions between MSCs and Human Umbilical Vein Endothelial Cells (HUVECs) in co-culture and the implications for angiogenesis.

Isolation and culture of MSCs

Human MSCs were isolated from pieces of iliac bone obtained during cleft palate surgery that were used as a secondary bone graft. All the procedures were approved by the Local Ethics Committee of the Hiroshima University Hospital (Decision no. 45). All donors provided informed consent. After removing the soft tissue including marrow, small bone chips were placed in a 100 mm cell culture dish (Corning, New York, NY, USA) containing α-minimum essential medium (α-MEM; Sigma Aldrich, St. Louis, MO, USA) supplemented with 10% fetal bovine serum (Daiichi Kagaku, Tokyo, Japan), 0.24 μl/ml kanamycin (Meiji Seika, Tokyo, Japan), 0.5 μl/ml penicillin (Sigma Aldrich), 1 mg/ml amphotericin B (ICN Biomedicals, Costa Mesa, CA, USA) at 37°C in 5% CO2. The medium was changed after 7 d. Within 2 w, cells migrated from the bone chips and adhered to the bottom of the cell culture dish. After several cell clusters were confirmed, MSCs were passaged and seeded at a density of 5 × 105 cells per 100 mm cell culture dish. Second passage cells were used in all experiments.

Induction of differentiation into osteoblasts

Total RNA was extracted from undifferentiated MSCs (Osteogenic differentiation (-)) and differentiation-induced MSCs (Osteogenic differentiation (+)) using TRIzol (Invitrogen, Carlsbad, CA, USA) and RNeasy® Mini Spin Columns (QIAGEN, Venlo, Netherlands). RNA integrity and concentration were evaluated with BioSpec-nano (Shimazu Corporation, Kyoto, Japan) with optic density obtained at 260 nm. Total RNA (1 μg) was reverse transcribed into cDNA using ReverTraAce (Touyoubou, Osaka, Japan) and Random primers (Touyoubou) according to the manufacturer’s protocol. Gene amplification of VEGF-A was performed on the LightCycler 480II (Roche Diagnostics, Basel, Switzerland) using the SYBR Green® Real-time PCR Master Mix (Toyobo). The primer sequences are shown in Table 1. Amplification conditions were 40 cycles of denaturation at 95°C for 15 s, annealing at 95°C for 30 s, and extension at 72°C for 10 s. The expression of each gene was normalized to the expression of GAPDH. Each sample was amplified in triplicate.

Undifferentiated MSCs (Osteogenic differentiation (-)) and differentiation-induced MSCs (Osteogenic differentiation (+)) were washed with Phosphate-Buffered Saline (PBS), protease inhibitor (Sigma Aldrich) was added, and cells were collected into Triton X-buffer (Nacalai Tesque, Kyoto, Japan). Sample buffer for SDS electrophoresis was added to the obtained protein solution, and the sample was heated to 100°C for 3 min. After separation by electrophoresis on a 10% SDSpolyacrylamide gel e-PAGEL (ATTO, Tokyo, Japan), proteins were transferred onto a PVDF membrane using an iBlot gel transfer system (Invitrogen). The membrane was blocked with 3% milk at 25°C for 15 min (FUJIFILM Wako Pure Chemical Corporation). The membrane was incubated with primary antibodies at room temperature. Anti-VEGF antibody (ab1316, Abcam, Cambridge, UK, 1:1000) was incubated overnight, or monoclonal anti-β-actin (AC-15, Sigma Aldrich, 1:1000) was incubated for 2 h. Membranes were then washed three times for 5 min each with 15 ml PBS and 0.1% tween-20 before addition of secondary antibody conjugated to a fluorescent entity. Goat anti-mouse IRDye 800 CW (LI-COR bioscience, 1:1000) was incubated for 40 min at room temperature.

Co-culture of MSCs and HUVECs

Cells were co-cultured in medium in a 1:1 ratio.

VEGF-A gene expression was analysed as described above in monocultures and co-cultures after 1, 3, and 7 d.

To observe only HUVECs, these cells were preliminarily subjected to fluorescent staining with Calcein AM (excitation wavelength 490 nm, fluorescence wavelength 515 nm) (DOJINDO, Kumamoto, Japan) by incubating in Calcein AM at 37°C for 30 min, followed by two washes with PBS. HUVECs and MSCs were seeded on chamber slides (Iwaki, Tokyo, Japan) at 2.5 × 103 cells/chamber, and HUVECs alone were seeded on chamber slides at 5.0 × 103 cells/chamber. Cocultures of MSCs and HUVECs, HUVEC monocultures, and HUVECs treated with 40 ng/ml VEGF were observed with an inverted light microscope. After 2, 3, and 4 d, phase contrast and fluorescent micrographs were taken.

Multiple comparison tests were performed with the Bonferroni/ Dunn method, and the comparative test between two groups was done with the Mann-Whitney U test. P-value<0.05 were considered statistically significant.

Bone differentiation and mineralization by MSCs 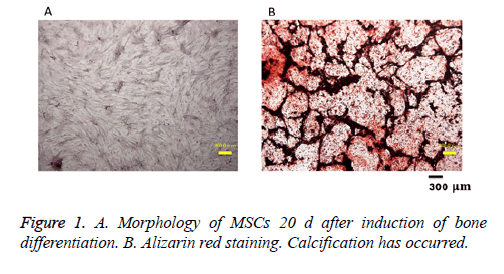 Figure 1: A. Morphology of MSCs 20 d after induction of bone differentiation. B. Alizarin red staining. Calcification has occurred. 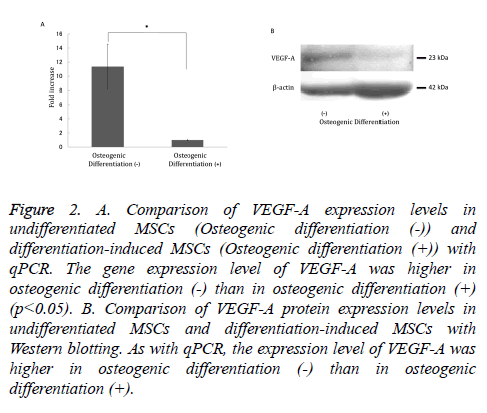 Change in VEGF expression in MSCs co-cultured with HUVECs

VEGF-A gene expression in MSCs co-cultured with HUVECs on the 3rd and 7th d after culture initiation was significantly enhanced compared with monoculture (Figure 3). 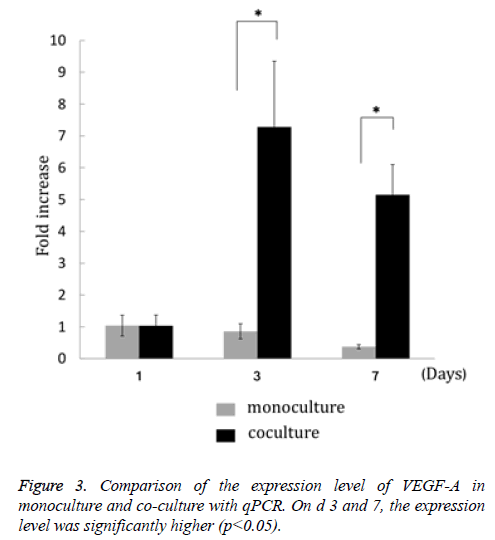 Cell morphology in HUVEC monoculture and coculture of MSCs and HUVECs 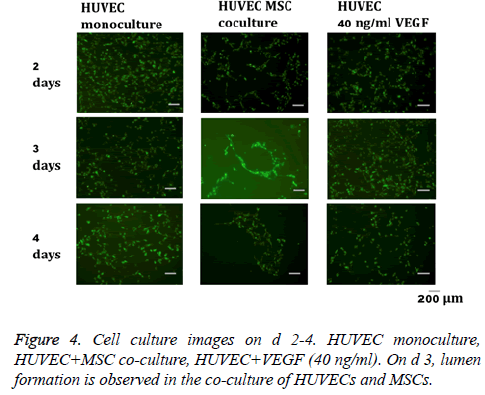 MSCs are promising candidates for tissue engineering and regenerative medicine therapies. For example, MSC implantation induces therapeutic angiogenesis in a rat model of hind limb ischemia via VEGF production by MSCs [15,16]. MSC transplantation improves cardiac function in a rat model of dilated cardiomyopathy. These beneficial effects may not only involve MSC differentiation into cardiomyocytes and vascular cells, but also their ability to supply large amounts of angiogenic, antiapoptotic and mitogenic factors [17]. Numerous studies have shown that MSCs migrate to and accumulate at the sites of tissue damage and inflammation [12], enhance engraftment of hematopoietic stem cells [18], and contribute to hematopoietic system reconstruction [19] and immunosuppressive function [20].

MSCs have favorable effects on bone regeneration. Agata et al. reported that differentiated MSCs treated with Bone Morphogenetic Protein-2 (BMP-2) after fibroblast growth factor pre-treatment formed significantly more bone than undifferentiated MSCs treated with BMP-2 after fibroblast growth factor pre-treatment [21]. Ikeda et al. showed that culturing MSCs in osteogenic medium containing rhBMP-2 with hydroxyapatite (HA) granules induces abundant ectopic mineralized tissue formation in mice, and that transplantation of undifferentiated MSCs does not induce ectopic ossification [22]. Transplantation of MSCs during the growth period results in regeneration of significantly more bone than osteogenicinduced MSCs. Therefore, not only regeneration of bone tissue but also restructuring of bone while preserving normal bone metabolism is important for patients with conditions such as cleft lip palate, because their bone will develop during the growth phase after transplantation.

To preserve normal bone metabolism, angiogenesis following creation of a vascular network is also required. Our result showing significantly increased VEGF-A gene and protein expression in undifferentiated MSCs compared with differentiated MSCs suggested that undifferentiated MSCs are superior to differentiated MSCs for inducing angiogenesis and implies that MSC transplantation will be more useful than osteoblast transplantation in terms of normal bone remodeling. Aguirre [23] suggested that BM-EPC/MSC co-culture can induce the endothelial phenotype and angiogenesis in both cell types by direct cell contact, vesicle trafficking, paracrine signaling through up-regulation of growth factors, and synthesis of endothelial extracellular matrix and matrix remodeling proteins. Leszczynska [24] reported an increase in VEGF mRNA expression over time in direct co-culture of MSCs and HUVECs. This observation was similar to our present results. As a preliminary experiment, we conducted experiments on the change in the number of cells in HUVEC single cultures and co-cultures of HUVECs and MSCs. We found no significant difference in the number of proliferating cells. Therefore, a change in cell number does not seem to be an important factor. Co-culture of MSCs and HUVECs may increase the expression of VEGF via cell-cell contact between the two cell types.

In general, HUVECs form a lumen after a few days of culture in the presence of growth factors on dishes coated with collagen or a fibrin clot. In this study, only GFP-labeled HUVECs were observed to form a lumen. This result suggested that MSCs have an important effect on formation of the lumen-like structure by HUVECs in the absence of extracellular matrix. Many reports have described co-culture of HUVECs and MSCs. Aguirre [23] reported decreased apoptosis of MSCs when directly or indirectly co-cultured with HUVECs compared to MSCs grown in monoculture. Wang [25] showed that the culture medium of MSCs promotes HUVEC proliferation and that the culture medium of HUVECs promotes MSC proliferation. Bidarra [26] reported that direct co-culture of HUVECs and MSCs results in formation of a tubular-like cellular network. Ikeda et al. [22] showed that after 3-4 d in co-culture, HUVECs become elongated in shape, similar to HBDCs. Lumen-like structures formed by CD31-positive cells that were considered ECs only formed when HUVECs were co-cultured with HBDCs at a ratio of 1:4.

In summary, our results suggest that undifferentiated MSCs, which produce more VEGF than osteogenic-induced MSCs, may contribute to angiogenesis.

The authors state no conflicts of interest.