The role of survivin in oral squamous cell carcinoma

Tumor samples were collected from 30 patients who were suffered with squamous cell carcinoma of the oral cavity. The patients were treated by radical surgical resection between 2012 and 2015 at the Jinling hospital. There were 24 patients who were positive for survivin (80.0%) and 6 patients who were negative for survivin (20.0%). Compared with normal mucosa, there were significantly up-regulated survivin and caspase 9 in OSCC which were proved by Flow Cytometry (FCM) and western blot, respectively. In conclusion, survivin and Caspase 9 might be prognostic markers for Oral Squamous Cell Carcinoma (OSCC).

Oral Squamous Cell Carcinoma (OSCC) is the sixth most common cancer all over the world, whose incidence is about 264,000 cases and 128,000 deaths every year [1]. The overall 5 y survival rate of OSCC is still less than 50%, it has not been improved significantly during the past 3 decades [2,3]. OSCC often leads to dysfunctions of chewing, swallowing, speech as well as the loss of esthetics. What’s more, although there are more than 80% of early-stage OSCC patients that can be cured by therapy, there are still about 70% of patients with progressive disease cannot be cured [4]. Consequently, it is urgently needed for precise early detection of OSCC patients.

Survivin (baculoviral inhibitor apoptosis protein repeatcontaining 5, BIRC5) is a cell cycle protein, whose expression is increased during the phase of G1 and reaches the maximum during the phase of G2/M [5]. Up to now, two common functions of survivin have been identified: an antiapoptotic property, which is remained controversial [6,7] and cell cycle control [8].

Survivin is found to be significantly over-expressed in human melanoma cells when compared with normal melanocytes [9], which seem to be a factor with a great chance for promoting the early-step melanoma formation in vivo [10]. As acknowledged, nonmelanoma skin cancers include SCC, basal cell carcinoma, and other less frequent tumors, etc. Survivin is reported to be over-expressed in human and mouse SCCs when compared to that in normal skin [11,12], and is tightly correlated with tumor aggressiveness and lymph node metastasis [13]. Meanwhile, Khan et al. found the overexpression of survivin in OSCC [14].

Over the past 15 years, survivin has been becoming an exciting area for scientific research, mainly on account of its highest expression level in various types of human cancers. In sum, survivin is poorly, or not, expressed in normal adult tissues, however, its expression was significantly increased in tumor cells, which points to survivin as a putative “tumor-specific antigen”. Under the stimulation of apoptosis involving mitochondria, survivin can form a complex with XIAP, elevate the stability of XIAP and its inhibitory activity against caspases [15,16]. Common cancer treatments currently induce apoptosis by downregulating the expression of survivin [17].

Therefore, early detection of OSCC is urgently needed. We aimed to carry out experiments to figure it out.

Paraffin-embedded tumor samples were collected from 30 patients with squamous cell carcinoma of the oral cavity. Their mean age was 67 y old ranging at 45-83 y old. There were 27 male patients (90.0%) and 3 female patients (10.0%) who were enrolled in the present research. The patients were treated by radical surgical resection between 2012 and 2015 at the Jinling hospital.

Tissues were extracted with RIPA. And protein concentration was quantified with the method of BCA. Protein samples were first separated by 8% SDS-PAGE, and then transferred to PVDF membranes. After the incubation and blockage of membranes with 5% BSA for 1 h at room temperature, caspase-9 antibody was added and incubated overnight at the temperature of 4°C. On the next day, the secondary antibody was added and incubated for 1 h at room temperature. At last, the Supersignal West Femto/Pico HRP sensitive chemiluminiscence substrate was adopted for color development. GAPDH was adopted as an internal control.

The statistical analyses in this study were carried out by IBM SPSS software (version 18/19; IBM Inc.). A significance level of 5% was established for all of the statistical tests.

Table 1. Clinical characteristics of patients included in the study.

Up-regulated survivin in OSCC than in normal mucosa

FCM was applied for the examination of survivin protein level between OSCC and normal mucosa. Results showed that, there was obviously higher survivin level when compared with that of normal mucosa (p<0.01, Figure 1). Moreover, our result was in consistent with previous studies about the changes of survivin in tumor tissues, for instance, SCC [11,12] and OSCC [14]. 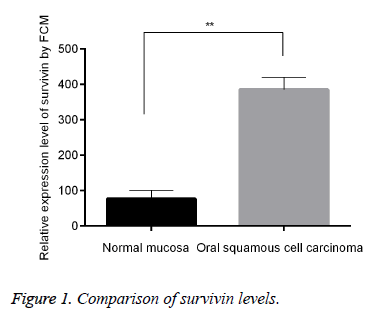 Down-regulated caspase 9 in OSCC than in normal mucosa

As we all well known, dysfunction of the apoptotic system leads to the pathogenesis of a large quantity of diseases, including cancer [18]. Caspases are a class of cysteine proteases which can be divided into mainly two different groups according to their corresponding functions in apoptosis (caspase-3/6/7/8/9) and inflammation (caspase-1/4/5/12) [19].

Since caspase 9 was one of the downstream molecules of survivin [20], we were eager to know the expression changes of caspase 9 between OSCC and normal mucosa. Western blot was applied for the detection of caspase 9 protein level in tissues, we found that, it was significantly higher in OSCC than in normal mucosa (p<0.05, Figure 2). The result was in consistent with a reported study which showed that expression level of caspase-9 was higher in OSCC cells than in the adjacent normal cells [21]. 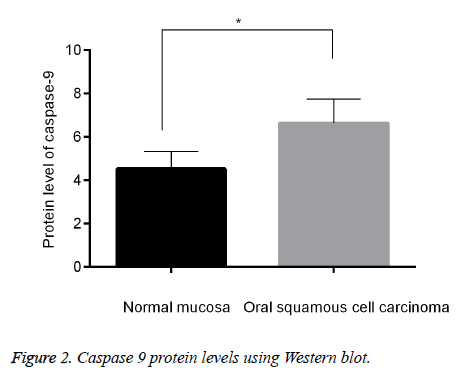 Our result was similar with previous studies. For instance, one study has found that, significant over-expression of survivin was in laryngeal cancer cells when compared with that in noncancerous cells [22]. Survivin isoforms are regulated following keratinocyte apoptosis, suggesting the potential role in the maintenance of epidermal homeostasis [23]. Survivin protects against apoptosis and regulates the progression of cell cycle, therefore, it is conceivable that, survivin plays an important role in the pathogenesis of psoriasis. Upregulation of survivin has been observed in the epidermis of psoriatic patients who were treated with narrow-band UVB combined with etanercept (tumor necrosis factor-a inhibitor), suggesting the survivin-dependent increased risk of skin cancer formation in psoriatic patients who undergo this type of combined therapy [24].

There was significantly elevated expression of caspases in the tumor tissues of multiple cancer types, including breast carcinomas [25], non-small cell lung carcinoma [26], and oral carcinoma [21]. As acknowledged, caspase cascades play important roles in the process of apoptosis and are tightly associated with the development and prognosis of cancers. However, the effect of expression and activation of various caspases in tumorigenesis is still a double-edged sword in cancers. In the current study, it was suggested that apoptosisrelated caspase-9 was elevated to inhibit tumor cell apotosis.

The work was supported by Jinling Hospital Management Project (2015018). 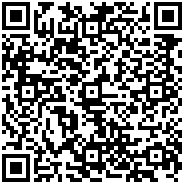