Objective: To study the mechanism of apolipoprotein M (Apo M) in the anti-atherosclerosis process of Simvastatin.

Methods: New Zealand white rabbit were used to obtain arteriosclerosis model, and divided into simvastatin group, control group and Sham group. High-fat diet was given for 20 weeks, the wall structure of rabbit carotid arterial and the middle thickness and plaque size number were observed. And calculate the correction plaque area (cross-sectional area of plaque area/arterial lumen), and further measured intimal proliferation degree. The level of Apo M was detected in the treatment of the expression level of middle and late.

Results: There was significant difference between the simvastatin group and the control group in the anti-atherosclerosis process. Besides, the correction area of plaque, inner membrane and middle membrane area were checked and found statistically significant when compared with controlled group. The content of Apo M was increased with the treatment progress. At the same time, the content of MDA was decreased significantly.

Conclusion: The artery plaque was serious in the control group; the middle membrane hyperplasia was in disorder, the number of collagen fiber was much more than before, elastic fiber was fewer. However, the carotid artery intima was still complete, no artery plaque, smooth muscle in middle membrane, elastic fiber rich was rich, and intima-media membrane area was close to normal level.

Atherosclerosis mainly involving medium and large arteries, is the basic lesion of the arterial intima lipid accumulation, intimal focal fibrosis, caused by the wall hard, stenosis and cause a series of secondary lesions, especially the occurrence of heart and brain and other organs, ischemic changes could be caused, serious harm the health of the elderly. It was widely distributed in the world epidemic. Its incidence, morbidity, mortality has been catapulted to the top of all diseases for atherosclerosis in the pathogenesis of cardiovascular disease research has been a hot research [1-3].

GRACE trial enrolled 19,537 patients with ACS between April in 1999 and September in 2002. And the results showed that those who never taken statins were compared with pre-hospital already used, ST-segment elevation or myocardial infarction was fewer to happen on this kind. And encountered fewer complications, less mortality. These data supported that the statins could adjust early the pathophysiology of ACS patients [4,5]. Thus, the present study was to establish the model of atherosclerosis in New Zealand white rabbits in vivo study, the MDA levels and the apolipoprotein M in the process of anti-atherogenic progress in the atherosclerosis model was researched, this might provide the basis for clinical trials of anti-atherosclerosis drugs.

70 New Zealand white rabbits were fed in separate cages. After adaptive feeding with the common forage (alfalfa) for 10 days, divide the rabbits at random for 5 groups and start the experiment (the 0th week)-control group were fed with high fat diet. Simvastatin group were fed with high fat diet as well as 4 mg/(kg-d) to intervene. High fat feed formula: 1% cholesterol +5% egg yolk powder+5% lard+0.5% bile salt+88.5% common feed. Limit feed per rabbit 100 g/d, free drinking water; experiment 0 week (before the start of the experiment) began to fill the stomach to take the medicine. In the control group, each rabbit was lavaged with 10 ml normal saline while in the simvastatin group, each rabbit was lavaged with 10 ml 4 mg/kg respectively diluted in 0.5% Twain solution, once a day. Continuous administration for 20 weeks [6].

Each experimental animal will be fasted for 12 hours before the last dose. In scheduled experiment, ear-vein injects with 3% Pentobarbital Sodium 30 mg/kg. After general anaesthesia immediately remove the entire aorta from the aorta arch to the iliac artery bifurcation. The tissue is divided into two sections, one section is fixed to the tissue pathological examination with 4% -70, and the other section is placed in the refrigerator for extracting the protein.

The experimental animals were anaesthetized with sodium after being weighed at the end of the twelfth weeks. Separate bilateral carotid artery of animals, take collagenase digest annular segment vessel and fixed with 4% par formaldehyde for 24 h. Then respectively manufacture into 4 um paraffin sections and 7 um frozen sections, giving the oil red 0 (lipid is red) and Masson's trichrome staining (collagen fibers were blue, smooth muscle is an orange red, red blood cells). Trace the area of positive staining area and patch area with Image Proplus 5.0 image analysis software. Calculate and correct Plaque area (the area of the plaque area and the cross-sectional area of the arterial lumen), the intimal hyperplasia area (IELA-LA), and the area of the medium (EELA-IELA). And view intimal hyperplasia area/medium film area as an index to measure the degree of intimal proliferation. Each sample takes the average number of 4-5 slices.

Test Serum apolipoprotein M levels with enzyme linked immunosorbent assay (anti apolipoprotein 1E2 antibody M and horseradish peroxidase labelled anti apolipoprotein 8F12 M antibody). In order to avoid the error, all specimens were carried out in the same reaction system, each of which was repeated twice, and the average value of the twice experiments was the final detection result.

Detection of MDA in serum and plaque [9]

Specimens plasma or serum samples can be directly used for detection of MDA; take the amount of vascular tissue, flush with physiological saline, dry with filter paper, weigh 0.1 to 0.2 tissue and put into liquid nitrogen quickly, and ground to a powder, collect in 1 ml PBS containing 0.05% BHT, 70ºC cryopreservation.

Analysis of MDA and HPLC were derived according to the kit, respectively add 0.1 ml homogenate or PBS proper solution into the centrifuge tube as blank control; add 0.1 ml different concentrations of standard products for standard curve; add 0.1 ml sample for determination; then join 0.2 ml MDA to detect working liquid. After mixing, heat the utility of PCR instrument to 100ºC for 15 minutes, the water bath and cooled to room temperature, 10009 20 μl centrifugal for 10 min, take 20 μl supernatant for high pressure liquid chromatography (CNW C18WP250 mm × 4.6 mm × 5 μm) analysis, using 50 mM 40% phosphate buffered saline (pH 6.8) and 60% methanol as the mobile phase, the flow rate was 0.9 ml/min, fluorescence detect by 527 nm excitation wavelength and emission wavelength of 551 nm. Result will be expressed by the wet tissue weight per gram.

Table 1. Indexed compared in each group.

Macrophages are one of the major components of atherosclerotic plaque, which play an important role in the formation, development and rupture of atherosclerotic plaque. Compared with model group, the content of macrophages in simvastatin group was significantly decreased (P<0.05) was reduced by 51.5% each; compared with simvastatin group, the model group showed a significant difference (p<0.01), was shown in Figure 1.

Figure 1. Different group of aorta of HE staining.

Table 2. The content of Apo M in each group.

Through the experiment, compared with the MDA content of the control group and the sham operation group, there were significant statistical differences in simvastatin group. The simvastatin group was the lowest, as shown in Figure 2. 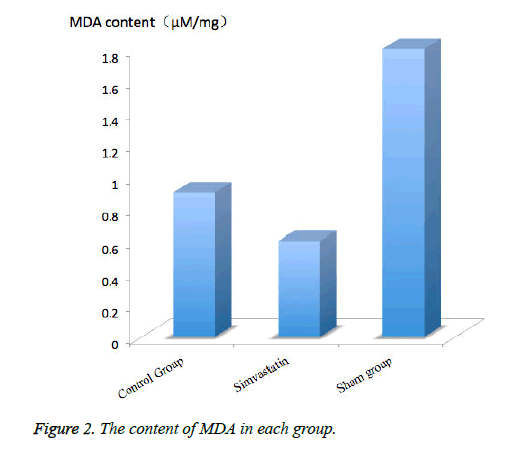 Dyslipidaemia is an important independent risk factor for atherosclerosis, and atherosclerosis is the most serious cardiovascular disease which was harmful to human health [10]. Therefore, the abnormal blood lipid has been widely valued by many countries. The formation of hyperlipidaemia was positively correlated with LDL-C in plasma, and negatively correlated with HDL-C/TC. The increase of HDL-C indicates that atherosclerosis has the tendency of regression and has protective effect on the arterial wall.

Wolfrum and some other people feed mice with high cholesterol Ldlr-/- for 12 weeks in order to induce atherosclerosis in mice. Then inject the ApoM carried by adenoviral vector, contributing to the plasma concentration of apo M increasing for 2-3 times and lasting for 3 weeks. Yuan found that pre beta HDL levels rise and in the test group, the aortic atherosclerotic lesion area is only 28% as much as control group , indicating that the increasing of high level of apo M and beta HDL levels have a protective effect on the formation of atherosclerosis [11].

Through the analysis of the study of HDL with apo M, it was confirmed that the HDL with apo M was different in the size, the charge and the density compared with the ordinary HDL. At the same time, HDL with apo M has a notable effect in cholesterol mobilization and against Cu2+-mediated LDL oxidation effect, compared with normal HDL. These studies with the above animal experiments have confirmed the conclusion that apo M with plasma HDL is closely related to the antiatherogenic effect [12].

However, the mechanism of anti-atherosclerosis effect of apo M is unclear, which may be related to the formation of pre beta HDL promoted by apo M and the inverse transport of cholestenone. But the study found that the sensitivity of HDL of apo M transgenic mouse to the adduction mediated by Cu2+ was significantly lower than that of the wild. Moreover, activity of HDL, which was isolated from the apo M transgenic mouse plasma, was significantly higher than that of the control group in mediated foam cell cholesterol efflux [13]. Therefore, the mechanism of the anti-atherosclerosis effect of apo M may be various.