The Return of the Dragon Faucial Diptheria

Diphtheria is caused by toxin producing strains of gram positve bacilli Corynebacterium diphtheriae. Epidemics occur when immunizaton coverage is inadequate. The characteristc pseudo membrane of diphtheria is formed by necrotc tssue, in?ammatory exudates, fbrin and colonies of the organism and bleeds on removal. Other di?erentals of membranous tonsillits include infectous mononucleosis, streptococcal pharyngits and Vincent’s angina. Diphtheria should be considered in all cases of membranous tonsillits in the appropriate epidemiological background, and anttoxin treatment should be initated promptly

A 11 year old female child referred from private hospital with H/O fever, throat pain, odynophagia for 5days and treated with parental antibiotics with diagnosis as acute membranous tonsillitis and referred to tertiary hospital for further evaluation and management reviewed in ENT OPD.

On examination patient was conscious, febrile with no respiratory distress. Local examination of throat revealed whitish pseudo membrane over the right tonsil and uvula with grade III tonsillar hypertrophy. In view of pseudo membrane in direct laryngoscopy examination not done. No palpable neck nodes. Patient admitted and evaluated further for throat swab culture & sensitivity and all basic investigations.

Gram stain revealed Gram positive bacilli with granules arranged in cuneiform pattern of morphology resembling cornybacterium diphtheria and further Albert stain confirmed green bacilli with metachromatic granules (Figures 1 and 2). Blood investigations differential count and coagulation profile within normal limits. ECG and X ray chest showed no significant abnormality. Patient was on IV fluids and parentral antibiotics. On confirmation of diphtheria patient was transferred to Pediatric ICU for Diptheria antitoxin therapy [1-5]. She was administered 50,000 IU ADS for 3 days. Patient recovered and on ENT follow up no evidence of membrane or pseudomembrane in oropharynx and clinically normal. Prophylaxis with oral erythromycin for 7 days given (Figure 3). 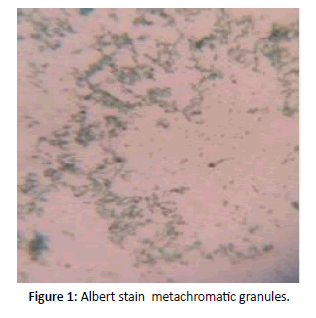 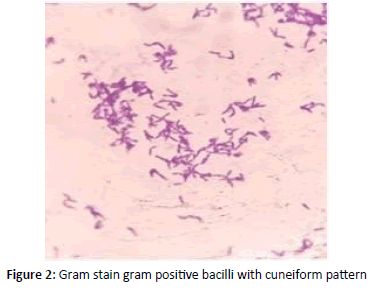 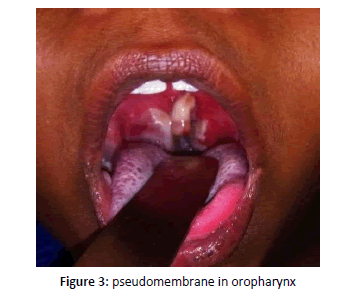 The Hippocrates only first described Diphtheria in the 4th century B.C., during epidemics that emerged across Europe. It was known as ‘the strangling angel of children’. ‘Diphtheria’ meaning leather in Greek, used in describing the greyish white pseudomembrane that deposits on mucous membranes of upper respiratory tract mainly in oropharynx. The causative organism being Corynebacterium diphtheria was discovered by German bacteriologist and physicist Fredrick Loffler and Edwin Loffler and known as Kleb Loffler bacillus [6-10].

The most common type of clinical presentation is faucial diptheria. Diphtheria is a contagious disease due to toxigenic strains of the pathogen C. diphtheriae is usually spread by direct physical contact among humans by droplets or through inhaling aerosols of infected individuals. Beginning with sore throat, low grade fever and later an adherent greyish white membrane over the tonsils, pharynx, and nasal cavity (Figure 4). This thick and fibrinous pseudomembrane, which may dislodge and severely obstruct upper airways to cause stridor in patients to cause sudden life threatening respiratory failure. The major fatality in Diphtheria apart from respiratory failure is life threatening complications including myocarditis and peripheral motor neuropathy [11]. The pathophysiology of diphtheria causing organ damage is due to prototypic, toxigenic exotoxin of bacterium. The virulence factor of exotoxin was first demonstrated by French Pierre- Paul-Émile Roux and Swiss-French Alexandre Émile JeanYersin. The microbial exotoxin is capable of inhibiting the process of protein biosynthesis to target individual steps of mRNA translation (e.g. initiation, elongation and termination) but also to attack different components of the ribosomal machinery. DT unfolds its lethal action, by hijacking a post-translationally modified residue known as diphthamide in its target protein EF2 (eukaryotic translation elongation factor 2). Eventually, EF2 inactivation by DT causes depletion of de novo protein biosynthesis and results in the death of the target cell. Non toxigenic strains may also acquire virulence following lysogenic conversion. Systemic organ damage associated with diphtheria is due to the lethal DT rather than dissemination of bloodborne pathogens. This led to the development of a highly successful toxoid vaccine in which inactivated DT that remains antigenic is able to raise an immune response. Even in immunized individual antibiotics (e.g. penicillin and erythromycin) are used as part of the treatment of patients who are diagnosed and confirmed Albert stain with diphtheria, prompt and immediate administration of diphtherial antitoxin is most effective in reducing the mortality rate. Immunity against diphtheria infection wanes over time among adults who lose protection from childhood vaccination unless they receive boosters in schedule and mainly defaulters in routine vaccination schedule. It is recommended that individuals at high risk of exposure (i.e. travelers to endemic areas, laboratory and healthcare workers) should receive a booster every 10 years [12-15]. 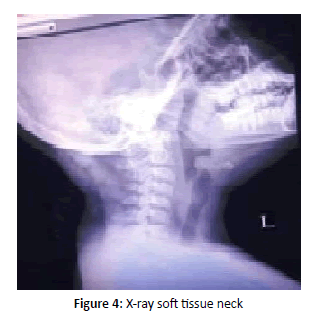 The role otolaryngologist in evaluation of every case of membranous tonsillitis should emphasis the recognition of reemergence of diphtheria by immediate throat swab for Gram stain, & culture and sensitivity apart from immediate airway management. The diagnosis of diphtheria infection is largely driven by clinical suspicion. While awaiting for definitive culture and sensitivity, antibiotics and anti-toxin therapy should be started immediately, to reduce morbidity and mortality associated with the disease.