The purpose of this study was to determine the remote after-effects (RAE) of a resistive static contraction of the pelvic depressors (RSCPD) using a Proprioceptive Neuromuscular Facilitation (PNF) pattern in the mid-range of pelvic motion in side-lying as an indirect approach on the improvement of hand-behind-back (HBB) range of motion (ROM) in patients with rotator cuff tears. A static stretch (SS) group and hold-relax (HR) group were used for comparison to the RSCPD group. Twelve outpatients with symptomatic rotator cuff tears were randomly assigned to the RSCPD group, HR group, or SS group. The mean (SD) age was 68.8 (6.2) years (range: 34-81). HBB ROM determined by measuring the distance between the top of the thumb and the spinous process of C7 (TSD) in centimeters was assessed with a tape. Percentage change in TSD after each technique was calculated in comparison with TSD before the technique. Group means were compared using a one-way analysis of variance (ANOVA) with Scheffé's test. The results of a one-way ANOVA showed significant differences between the techniques. Scheffé's post hoc testing revealed a significant difference only between the RSCPD group and SS group (p<0.05), sreflecting a greater percentage change in TSD in the RSCPD group. Application of RSCPD technique may be an effective approach in indirectly treating extremities that cannot be exercised directly because of pain. RAE of RSCPD technique may improve the AROM of the shoulder joint in patients with rotator cuff tears.

The rotator cuff consists of the supraspinatus, infraspinatus, teres minor, and subscapularis muscles together with their tendons. The rotator cuff provides a medial, inferior force to the humeral head during shoulder movements in order to center it in the glenoid fossa, thus providing adequate articular surface stability to allow full range of shoulder movement [1]. Muscle weakness or pain with rotator cuff tears could result in decreased passive range of motion (PROM) and active range of motion (AROM). Prescribed exercises aim to improve PROM, AROM and muscle function by restoring shoulder mobility and stability. In particular, hand-behind-back (HBB) range of motion (ROM) is often used in the evaluation of the effects of the intervention [1,2]. Restoring HBB ROM, utilizing various physical therapy techniques such as a static stretching (SS) and proprioceptive neuromuscular facilitation (PNF) technique. SS technique is a method in which target muscle is elongated to tolerance (i.e. stretching of the shoulder adductor with external rotator) at the relatively pain-free range and the position held the muscle in the greatest tolerated length [3]. Prolonged tensile stress can improve limited ROM more than can short-duration joint mobilization procedures [4].

If antagonist muscle contraction is difficult because of pain, we previously found the remote after-effects (RAE) of a resistive SC of the pelvic depressors (RSCPD) using a PNF pattern in the mid-range of pelvic motion in sidelying on the improvement of PROM [5] and AROM of shoulder [7] and knee joints [8] without stretching.

The source patients consisted of outpatient with rotator cuff tears in a certain hospital from April 2009 to March 2010 . Included in study were 12 patients (6 women, 6 men) with the painful movement plus pain in HBB ROM. Eight female and four male outpatients with rotator cuff tears prescribed from orthopedists for improving ROM of the shoulder joint. Exclusion criteria included any other orthopedic disorders and any neurological disorder within the last year that required medical attention. This study was performed in compliance with the revised declaration of Helsinki. All participants gave their written informed consent. The mean (standard deviation; SD) time since onset was 6.8 (8.4) weeks (range 2-26). The mean (SD) age was 68.8 (6.2) years (range 56-79).

The technique consisted of a RSCPD, HR and SS technique. Twelve outpatients with symptomatic rotator cuff tears were randomly assigned to the RSCPD group, HR group, or SS group. The duration of technique was 20 s in each of the three techniques. 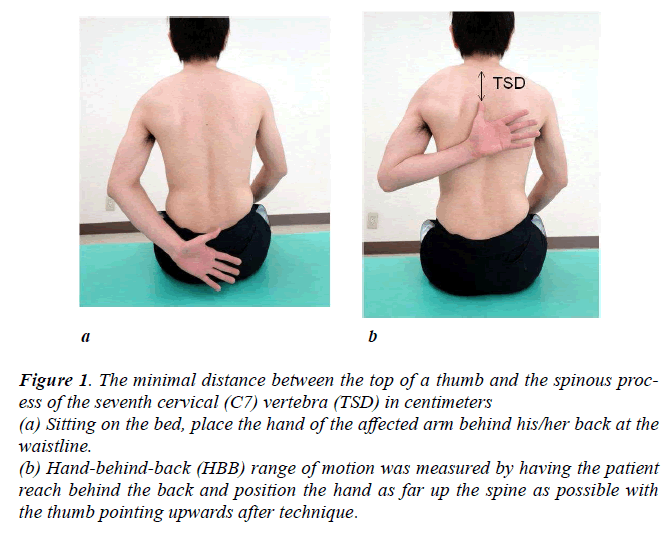 Figure 1: The minimal distance between the top of a thumb and the spinous process of the seventh cervical (C7) vertebra (TSD) in centimeters (a) Sitting on the bed, place the hand of the affected arm behind his/her back at the waistline. (b) Hand-behind-back (HBB) range of motion was measured by having the patient reach behind the back and position the hand as far up the spine as possible with the thumb pointing upwards after technique. 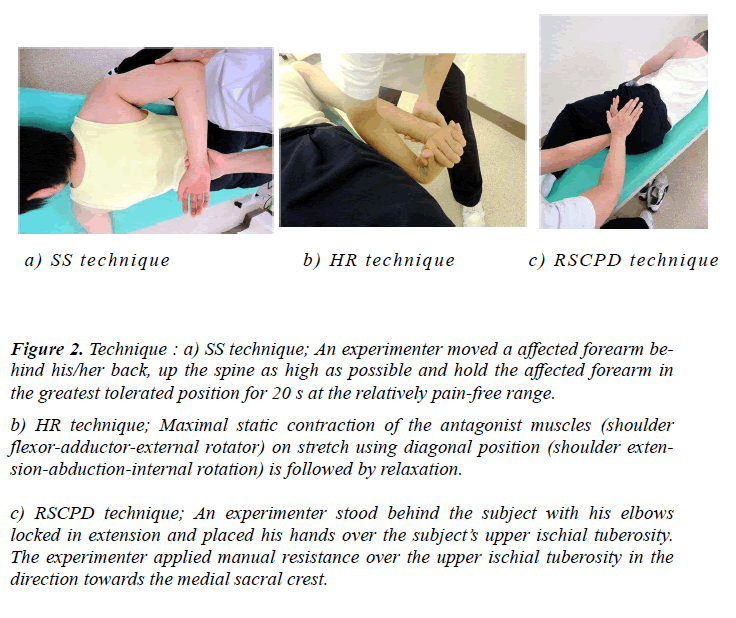 Figure 2: Technique : a) SS technique; An experimenter moved a affected forearm behind his/her back, up the spine as high as possible and hold the affected forearm in the greatest tolerated position for 20 s at the relatively pain-free range.
b) HR technique; Maximal static contraction of the antagonist muscles (shoulder flexor-adductor-external rotator) on stretch using diagonal position (shoulder extension- abduction-internal rotation) is followed by relaxation.
c) RSCPD technique; An experimenter stood behind the subject with his elbows locked in extension and placed his hands over the subject’s upper ischial tuberosity. The experimenter applied manual resistance over the upper ischial tuberosity in the direction towards the medial sacral crest.

A maximal SC of the antagonist muscles (shoulder flexoradductor- external rotator) on stretch using diagonal position (shoulder extension-abduction-internal rotation) is followed by relaxation as shown in fig. 2(b).

Intrarater reliability was established for the force of RSCPD technique by intraclass correlation coefficient (ICC) for 20 s at random points before the experiment. The value of force as resistance of SCPD was measured by a pinch meter over the ischial tuberosity. The reliability of resistance from 4 trials measured during RSCPD technique was determined by using a two-way analysis of variance (ANOVA) to derive the ICCs. The ICC of the value of the force during RSCPD technique was 0.95 (95% confidence interval [CI] = 0.86–0.99), which reflects a high reproducibility of resistance.

HBB ROM was determined by measuring the distance between the top of the thumb and the spinous process of C7 (TSD) in centimeters with a tape as shown in fig. 1. Percentage change in TSD after each technique was calculated in comparison with TSD before technique. Percentage change in TSD were compared using a one-way analysis of variance (ANOVA), via the effect of the technique (SS, HR and RSCPD technique).

SPSS for Windows, PASW version 17.0 (SPSS Inc, Tokyo) was used for the analyses. A probability level of P < 0.05 was used to determine statistical significance.

1) Prior to the experimental study, a pilot study was conducted to determine the intratester reliability of the value of TSD. ICC for TSD was calculated [9].

2) The differences in the value of TSD among the three groups were examined using a one-way ANOVA with Scheffé's test.

The results of this study suggest that RSCPD technique revealed a significant improvement of TSD as compared to the SS technique. The parameter of TSD is one of the main indicators of functional ability. The facilitating RAE on the shoulder joint by RSCPD technique suggests that RSCPD technique may be an effective indirect approach to improve HBB ROM in patients with rotator cuff tears.

Inherent stiffness or slackness of the intrafusal muscle fibers at any given time is highly dependent on the immediate previous history of movements and contractions [10]. Intrinsic stiffness arises from muscle fibers, and from surrounding connective tissues [10]. The mechanical contributions of these various sources of stiffness vary under different functional conditions such as joint position and voluntary contraction level [11]. The results of previous our study showed that the RAE of a SC combined with the diagonal position of shoulder joint and strong pinch force on the improvement of maximal AROM of wrist flexion was significantly larger compared with a SC combined with the neutral position and weak pinch force in normal subjects [12]. It is also shown that RAE observe at the proximal muscles not involved in the previous voluntary activity following a 30–60 sec SC of distal muscles [13]. Gurfinkel et al. (1989) [13] suggested that RAE cannot be explained in terms of local reflex mechanisms alone. A SC of a neck muscle group induced RAE affecting the whole body as a a postural response, which varied according to the neck muscle group contracted [14].

Increased flexibility of muscles may lead to increased PROM [15,16], or result from increasing muscular recruitment [17]. The neurophysiological RAE induced by RSCPD technique on the extensor digitorum communis (EDC) [18] or flexor carpi radialis (FCR) [19] Hoffmanreflex (H-reflex) initially caused reflexive inhibition during RSCPD technique, followed by a gradual excitation after RSCPD technique. The reduction of the H-reflex in the first phase of RAE during RSCPD technique may indicate the decrease in muscle stiffness, which may increase flexibility of muscles. The gradual facilitation of RAE on the remote EDC or FCR H-reflex in the second phase of RAE after RSCPD technique may increase the recruitment of motor unit in the upper extremity, which may result in increased HBB ROM in patients with rotator cuff tears. Both the reduced passive stiffness and increase in muscular recruitment activation after RSCPD technique may enhance both the PROM [19] and AROM [6,7] of the shoulder joint in patients with orthopedic impairments.

Triggering of RAE during and after RSCPD technique may be correlated with the activation of load receptors of central pattern-generators (CPGs), which can determine the choice of appropriate coordinated pattern according to the proprioceptive input arises from muscles, skin, joints and tendon [20,21]. The magnitude of force of RSCPD technique was between 2 and 3 kg in this study. Efficient RAE to improve the AROM of the remote parts may be dependent on the degree of proprioceptive information generated by the activation of load receptors and strength of SC. However, what magnitude of force facilitates RAE most efficiently still remains unclear. Further research is needed to identify the optimal magnitude of force. It remains also unclear which is better the RAF of a resistive exercise in the mid-range or end-range of pelvic motion of posterior depression on the remote muscles. We should investigate the efficient method to induce RAE