Objective: In this study, we aimed to determine the reliability of median nerve measurements obtained by ultrasonography in the diagnosis of Carpal Tunnel Syndrome and to determine the correlation with Tinel’s and Phalen’s sign test which are the diagnostic methods in order for clinical physical examination.

Materials and Methods: Hand wrists of 36 patients were diagnosed as Carpal Tunnel Syndrome with anamnesis, clinical findings and electrophysiological (EMG) examinations which were examined with high resolution ultrasonography including 12 MHz linear probes performing by a neurology clinic. All the wrists were evaluated in neutral position with the palms up and the fingers half-extended. The transverse and anteroposterior diameters of the median nerve and cross sectional areas were measured at the level of the pisiform bone at the proximal carpal tunnel. Median nerve measurements between patient group and control group and clinical findings which are Tinel’s and Phalen’s sign test results of the patient group were compared with median nerve measurements.

Results: 86 wrists of 66 patients were examined. The transverse and anteroposterior diameters of the median nerve and cross-sectional areas obtained by direct method were calculated in both the patient group and the control group. In the patient group, averages of transverse and anteroposterior diameters of median nerve and means of cross sectional area obtained by direct method were higher than the control group and there was a statistically significant difference (p<0.05).

Conclusion: Ultrasound diagnosis of Carpal Tunnel Syndrome has much more superior diagnostic value than Tinel’s and Phalen’s sign tests, which are the clinical diagnostic methods.

Carpal Tunnel Syndrome (CTS) is the most common nerve compression syndrome associated with medial nerve pressure on the ankle, accompanied by clinical symptoms such as numbness, weakness and pain in the fingers and wrist [1]. In most cases, CTS is idiopathic but it can emerge due to trauma, especially carpal bones breakage or displacement, diabetes, congestive heart failure, local tumors, alcoholism, vitamin toxicity or deficiency, exposure to toxins, and pregnancy [2-4]. It is thought that augmented pressure in the carpal tunnel cause to venous congestion of the median nerve and then nerve edema, and ultimately to the impairment of blood flow [5]. Epineural edema resulting from prolonged pressure gives rise to chronic inflammation and scar tissue occurrence around the median nerve [6].

The diagnosis of Carpal Tunnel Syndrome is made by clinical findings (Tinel’s sign test and Phalen’s sign test) and Electromyographic (EMG) studies [7]. Magnetic resonance imaging and ultrasonography admit of non-invasive etude of the median nerve and other anatomical structures in the carpal tunnel [8-11].

This clinical study statistically evaluates the differences between clinical findings (Tinel’s sign test and Phalen’s sign test) and healthy controls for ultrasonographic diameter measurements of the median nerve in the carpal tunnel on patients diagnosed with carpal tunnel syndrome.

36 patients who were definitely diagnosed on account of anamnesis, clinical findings and electrophysiological (EMG) examinations and Nerve Conduction Studies (NCS) as CTS by a neurology clinic between May 2016 and Dec 2016 were included in this prospective study. 30 patients without CTS symptoms were included as the control group. No invasive method was used in this study and all diagnostic methods were harmless. These patients were referred to our clinic for evaluation of carpal tunnel sonography as the part of routine clinical consultation, and only verbal consent was obtained from the patients. Patients with history of wrist surgery, anatomical variations of the median nerve, diabetes mellitus, hypothyroidism, rheumatologic diseases, or metabolic disorders as other systemic disorders that may cause CTS were not included in the study.

Evaluations were performed by high resolution ultrasonography with a 12 MHz linear probe (Aplio 500, Toshiba Medical Systems Corporation, and Tokyo, Japan). All the wrists were evaluated in neutral position as the palms up and the fingers half-extended and the full course of the median nerve in the carpal tunnel was evaluated on both transverse and sagittal planes. The diameters of transverse and anteroposterior and cross-sectional areas of the median nerve were measured at the level of the pisiform bone from the proximal carpal tunnel (Figure 1). While the definition of exact boundaries of the median nerve were clearer in the proximal carpal tunnel and this definition was more difficult in the distal portion where contained deeper nerve and the signal-to-noise ratio was weak. Therefore, measurements were done in the proximal section. The cross-sectional area of the median nerve was made from the internal border of the perineural echogenic line surrounding the hypoechoic median nerve with direct method (tracing method) [9]. For the measurements, the median nerve values were measured by two radiologists who had no information of the clinical data and had 5 y of experience in order to minimize intra-observer and inter-observer variability for median nerve measurements, resulting in less than 5% variability. All measurements were rounded to the nearest 0.01 cm2. Results of Tinel’s sign and Phalen’s sign physical examination test of the patients were recorded. 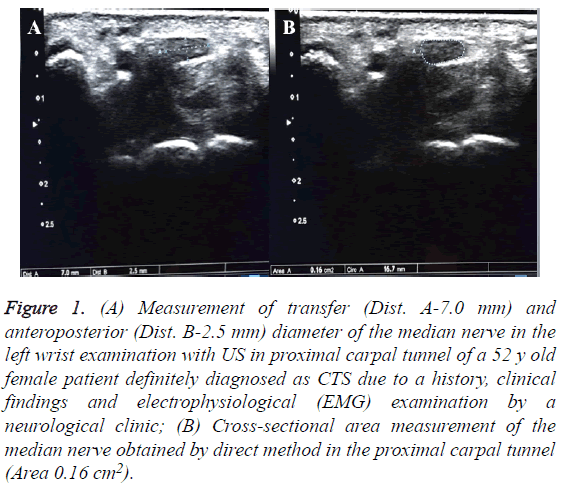 Figure 1: (A) Measurement of transfer (Dist. A-7.0 mm) and anteroposterior (Dist. B-2.5 mm) diameter of the median nerve in the left wrist examination with US in proximal carpal tunnel of a 52 y old female patient definitely diagnosed as CTS due to a history, clinical findings and electrophysiological (EMG) examination by a neurological clinic; (B) Cross-sectional area measurement of the median nerve obtained by direct method in the proximal carpal tunnel (Area 0.16 cm2).

Median nerve measurements between patients and healthy controls were compared and the accuracy of the results obtained with ultrasonography findings was calculated.

Data analysis was performed with usage of Statistical Package for Social Sciences 15.0 for Windows (SPSS Inc., Chicago, IL). BMI, median nerve transvers, anterioposterior diameter, CSA values comparison in between the CTS with patient group and the healthy control group Student's t-test and Mann- Whitney-U test was used. Median nerve transverse, anterioposterior diameter, CSA values comparison in between Tinel’s sign and Phalen’s sign positive and negative group, Student’s t-test and Mann-Whitney-U test was used. The relationship between the transverse, anteroposterior, crosssectional area diameters of median nerve and BMI was examined by Pearson’s correlation coefficient. The results were evaluated in a 95% confidence interval and a significance level of p<0.05.

In addition, the Receiver Operating Characteristic (ROC) curve analysis test was applied in order for specification of the performance of median nerve diameters in diagnosis of the CTS. The area under the curve, cut-off points, sensitivity, and specificity values were determined for estimating different models. 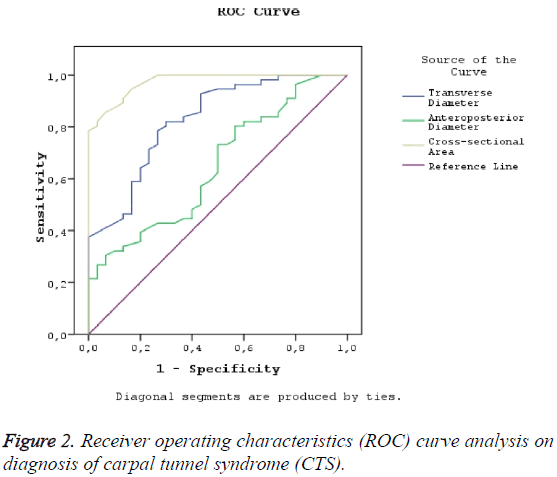 The pathophysiology of Carpal Tunnel Syndrome (CTS) is not clear, and sometimes it can be difficult to make a diagnosis. CTS can be diagnosed by history, clinical physical examination and confirmatory studies. Confirmatory studies such as Electromyogram (EMG) and Nerve Conduction Studies (NCS) may be helpful in diagnosing of CTS but they are expensive and lesser availability studies. For this reason, although physical examination findings such as Tinel’s and Phalen’s sign have been shown to be beneficial in the CTS, US have an important place in the evaluation of peripheral nerves and CTS in recent years. A number of US examinations and findings were shown to be beneficial in the diagnosis of CTS. In a study by Dejaco et al. reported, diagnostic values were comparable for all sonographic methods to determine median nerve swelling, with area under the curves ranging from 0.75 to 0.85 [12]. Thresholds of 9.8 and 13.8 mm for the largest crosssectional area of the median nerve yielded a sensitivity of 92% and a specificity of 92%. Another study by Hammer et al. reported cross-sectional areas of the median nerves were significantly higher in the CTS patients compared with the RA controls and healthy persons [13]. In a study conducted by Karadag et al., it was reported that patients with median nerve CSA between 10.0 and 13.0 mm were evaluated with electromyography (EMG) [2,14]. CTS was diagnosed if CSA of median nerve>13.0 mm or CTS was shown with NCS. It is also important that the US is fast and comfortable in terms of detecting the tenosynovitis, ganglions, soft tissue tumors and causal anatomical abnormalities.

In this study, we aimed to determine the reliability of transverse and anteroposterior diameter and cross-sectional measurements of the median nerve in the US for the diagnosis of CTS, and the relevance of the clinical physical examination methods which are Tinel’s sign test and Phalen’s sign test. Buchberger et al. measured the median nerve mean crosssectional area as 0.145 cm2 in the CTS patients and 0.079 cm2 in the control group [15]. In our study, mean cross-sectional area measurements of the median nerve at proximal carpal tunnel level were higher in CTS patients (0.184 cm2) than in the control group (0.070 cm2) and were consistent with previous study results [10,16,17].

Kouyoumdjian et al. have associated the various risk factors such as age and BMI with CTS and found significant to augmentation of body mass index (BMI) for CTS [18]. Komurcu et al. have associated the risk factors such as BMI and age with the CTS in a study they performed [19]. In our study, BMI values were higher in the patient group 39.48 ± 7 kg/m2 than in the control group 35.96 ± 5 kg/m2 and these values were similar to previous studies. However, we found no relationship between age and CTS in our study.

Neurophysiological studies in CTS are the most reliable diagnostic methods. However, the median nerve measurement in the US is a non-invasive, rapid and comfortable method for diagnosing CTS, and the US has a superior diagnostic value compared to Tinel’s and Phalen’s sign tests. Nevertheless, we believe that if US are accepted as a routine examination in CTS and are utilized together with physical examination, it will increase the chance of diagnosis.