The relationship between total standardized mini mental state examination (SMMSE) and subscores and D vitamin, Folate and B12 levels in patients with cognitive dysfunction

Introduction: There is evidence that low vitamin levels may be associated with cognitive functions, results from studies on this issue have been incoherent. This study aimed to evaluate whether there is any relationship between the levels of Vitamin D, Folate and B12 and Standardized Mini-Mental Test (SMMT) and subgroups in patients with cognitive dysfunction.

Conclusions: Folate deficiency is an easily treatable condition. Thus it should be considered in the differential diagnosis of cognitive impairment especially in female patients.

There are many studies that point out to the fact that group B vitamins, vitamin D, folic acid, antioxidant vitamins, essential minerals and essential fatty acids play a key role in cognitive function [1,2]. In a pilot study, it was shown that the concentration of many vitamins in AD patients with moderate stage dementia without vascular disease and weight loss were significantly reduced compared to healthy controls. This suggests that regulation of nutrition and specific vitamin intake may prevent brain damage and dementia [3].

The Standardized Mini-Mental State Examination (SMMSE) is one of the main methods to evaluate cognitive functions. SMMSE has been developed primarily to assess delirium and dementia with high sensitivity and specificity [4]. Subsequently, SMMSE has been extended for use in global cognitive impairment. The maximum total score is 30 and the limit value for the cognitive impairment is 24 [5]. The aim of this study is to investigate the relationship between the levels of Vitamin D, Folate and B12 and Standardized Mini-Mental Test (SMMT) and its sub scores in patients with cognitive dysfunction.

This retrospective study was conducted using data of patients who were admitted to Abant Izzet Baysal University, Department of Neurology between January 2015 and March 2017 with cognitive complaints who had SMMSE scores of 24/30 or less were prospectively and consecutively recorded. Of the 184 patients, 95 were females and 89 were males. Patients with vascular dementia, frontotemporal dementia, Lewy body dementia, psychotic findings, and severe depression were excluded from the study. SMMSE scores were prospectively recorded in the patient's file for each patient by an experienced neuropsychologist. Vitamin B12, vitamin D and Folate levels were studied from 10:00 am fasting blood samples of each patient and prospectively recorded in patient file. After obtaining the necessary institutional permission for the use of patient data, patient files were retrospectively reviewed and data were recorded. The study was approved by the local Ethics Committee (no:2013/136) and conducted in accordance with the Declaration of Helsinki.

In the study, the data was analyzed by using SPSS 22.0 for windows package program. The chi-square test was used to evaluate the difference between the categorical variables such as gender and educational status between the groups. Normal distribution of vitamin levels was tested visually (histogram and probability plots) and by analytical (Kolmogorov-Smirnov/ Shapiro-Wilk) methods. Spearman correlation analysis was used for correlations between variables when at least one of the SMMSE and vitamin levels did not meet the normal distribution.

In the present study, of a total of 184 patients, 89 were males and 95 were females. The educational level of female patients was significantly lower than in males (p<0.001) (Table 1). The mean age was 69 (range: 32 to 91) years in males and 68 (range: 31 to 90) years in females. There was no statistically significant difference regarding age between females and males. (p=0.7). Vitamin D and folate levels were statistically significantly lower in females than males (p <0.001). Vitamin B12 levels were within normal ranges in both sexes. There was no significant difference in vitamin B12 levels between males and females (p=0.9). Vitamin D levels were 12 ng/mL (2-45) below the normal value in both groups, more pronounced in females. There was no significant difference in total SMMT, orientation, record-memory, attention orientation, language and recall scores in males and females (Table 2). In the Spearman's Correlation test, no correlation was found between vitamin D and vitamin B12 levels and SMMSE (total and sub scores) in both sexes. In females, folate levels were significantly correlated with the SMMSE total (p=0.005, r=0.288), orientation (p=0.004, r=0.290) and registration (p=0.04, r=0.215) scores. There was a positive correlation between the folate levels and the SMMSE recall sub score in both sexes (p=0.002, r=0.227) (Figures 1 and 2). 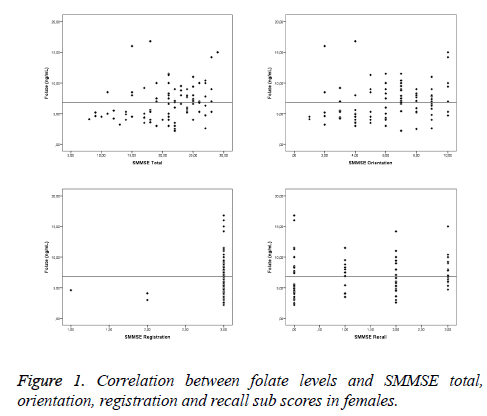 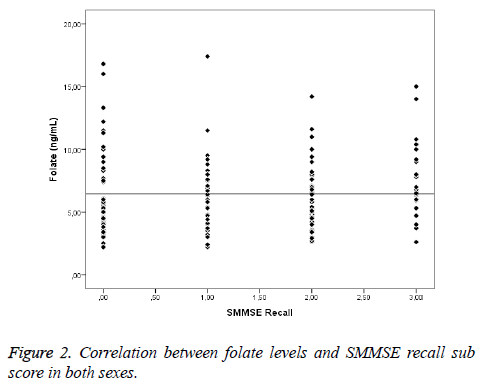 Figure 2: Correlation between folate levels and SMMSE recall sub score in both sexes.

Table 1. Comparison of educational status between males and females.

In this study, correlations between serum Vitamin D, Vitamin B12 and folate levels and standardized mini mental state results in elderly subjects were examined. A significant correlation was found between serum folate level and cognitive impairment, especially in women. SMMSE total score was correlated with the folate levels in both sexes, and correlations were also found with orientation, registration and recall scores from SMMSE subgroups in females.

In several studies it has been shown that folate and Vitamin B12 levels are inversely correlated to the clinical condition in patients with Alzheimer's disease-related dementia [6-11]. Similar correlation has also been demonstrated in elderly individuals with cognitive impairment. Although the underlying mechanism of cognitive dysfunction is not clearly understood, it is considered that low Vitamin B12 and folate levels influence the methylation reactions or homocysteine levels in the brain according to the hypothesis established based on the results of some studies. It is also considered that homocysteine may lead cell death by activating N methyl D aspartate receptors (NMDA) or may cause an exotoxic effect by converting to homocysteine acid [12-16]. In a study conducted by Goodwin et al., nonverbal abstract thinking skills and memory scores in neuropsychological tests were found to be significantly lower in individuals with low folate levels than those in normal folate levels [17]. Ma et al. have shown that a daily oral administration of a 400-μg folic acid supplement to the patients with mild cognitive impairment (MCI) for 12 months may significantly improve cognitive performance and reduce peripheral inflammatory cytokine levels [18]. Ulstein et al. investigated nutritional factors among home-living patients diagnosed with MCI or Alzheimer’s disease-related mild dementia, compared to healthy subjects. They found no associations between vitamin levels and early cognitive impairment in patients with Alzheimer’s disease [19]. Riggs et al. reported that individuals who received vitamin C, folate and vitamin B12 supplementation had lower scores than those who did not [14]. It has been reported that low level of vitamin D is associated with low SMMSE scores and low memory testing in subjects with normal vitamin B12 levels [20]. In a prospective cohort study conducted by Schneider et al., no association was found between vitamin D deficiency and neurodegenerative disorders [21]. In our study, we also did not find any significant correlation between vitamin D and SMMSE scores. The patients included in the study were all recruited from the same neuropsychologist and underwent a comprehensive standardized assessment. There were few limitations in our study. Serum homocysteine concentrations were not measured. The number of participants was too small to examine the correlation between vitamin levels and cognitive scores.

In this study, no significant correlation was found between Vitamin B12 and Vitamin D levels and cognitive status, unlike many previous studies. A significant correlation was found between low folate levels and cognitive status. Folate consumption has important implications on cognitive functions. The cognitive impairment due to folate deficiency is a condition that may easily correct. Folate deficiency should be considered in the differential diagnosis of cognitive impairment especially in female patients. Further studies are needed to determine whether folate sufficiency might have a role in cognitive functions.