Introduction: Fetuin A, also called Heramans Schmid alpha 2 glycoprotein (AHSG), is one of the important proteins that inhibit vascular calcification. In this study, we aimed to evaluate relationship between AHSG gene polymorphism and fetuin A levels.

Conclusion: The current study showed that HD patients with altered polymorphism of the AHSG Thr256Ser gene appear to be a negative prognostic factor on serum Fetuin-A levels. In other words, it can be speculated that fetuin-A Thr256Ser gene polymorphism, particularly genotypes Thr/Ser and Ser/ Ser, may be an additional promoting risk factor for vascular ossification in HD patients.

The mortality rate among dialysis patients is obviously more than that of the general population and cardiovascular diseases are the leading causes of mortality among dialysis patients [1,2]. This very high cardiovascular mortality rate in this population is only partially explained by the high prevalence of traditional risk factors which are classically related to atherosclerosis [3]. The vascular changes observed in chronic kidney disease (CKD) are not only based on atherosclerosis, but also arteriosclerosis is widely seen associated with pathological vascular calcification of both media and intima [4]. Eventually, arterial stiffening and the extent of calcification are reported to be strong prognostic markers of mortality rates in hemodialysis (HD) patients [5]. It is assumed that this may be partially related to a relative lack of calcification inhibitors or vascular protective factors like fetuin-A.

Fetuin-A, also known as α2-Heremans-Schmid glycoprotein (AHSG), is a circulating negative acute-phase glycoprotein with 62-kDa molecular weight [6]. It is synthesized in liver and is a member of cystatin superfamily of cysteine proteases. Fetuin-A is involved in several biological processes including the inhibition of ectopic mineral calcification and decreased serum levels are reported during inflammation [7,8]. In vitro studies have demonstrated that, fetuin-A inhibits the apatite formation and that it significantly accounts for the ability to prevent mineral precipitation [9]. It binds to calcium phosphate with severe adherence and acts as a buffer for serum calcium phosphate. In animal models of CKD, fetuin-A inhibits pathological calcification in the vasculature, protecting against atherosclerotic plaque formation [10]. In accordance with this, massive ectopic calcification occurs in fetuin-A knockout mice receiving a diet with a high content of calcium and vitamin D [11]. The role of fetuin-A has also been studied in clinical trials. Lower serum fetuin-A concentrations have been shown to increase the risk of cardiovascular disease [12,13]. Moreover, fetuin-A levels are found significantly lower in CKD patients with calciphylaxis compared with other CKD subjects [11]. Based on these evidences, it is assumed that deficiency in fetuin-A likely contributes to vascular calcifications in CKD. There is also some evidence in the literature about the relation between serum levels and polymorphisms in the gene encoding fetuin-A [13,14]. However, the results are conflicting and in addition they are mainly based on AHSG T256S gene polymorphism. Therefore we aimed to investigate the relation between serum Fetuin-A levels and polymorphisms of AHSG T256S and T248M genes which are encoding Fetuin-A, in a Turkish HD patient population.

This cross-sectional, single-center study enrolled patients with end stage renal disease (ESRD) having HD treatment and agematched healthy control subjects. The patients in the HD group were recruited from the adult patients receiving regular dialysis treatment thrice a week for four hours with standard bicarbonate dialysate and with synthetic membranes for more than 9 months. Exclusion criteria were; history or existence of malignancy, chronic liver diseases, autoimmune diseases, symptoms of active infection or inflammation, hepatitis B and C virus infection and being on steroid treatment. 152 patients receiving regular HD treatment and 61 healthy controls were included to the final evaluation. The study protocol was approved by Local Medical Ethics Committee. It was performed in accordance with the principles of the Helsinki Declaration and informed consent was obtained from all participants. Demographic and clinical data were screened from medical records including age, gender, smoking habits, primary kidney disease, time on dialysis, medications, Kt/ Vurea (Single pool urea clearance index, used to represent weekly dialysis dose; where K is the clearance of urea, t is the dialysis time and V is the volume of distribution of urea) and comorbid conditions. Anthropometric measurements were performed in all subjects and body mass index (BMI) was calculated as the ratio of weight (kg) to the square of height (m). Arterial blood pressure was measured three times with an appropriate cuff after at least 10 minute resting and the average value was taken into account.

For the determination of serum Fetuin A, calcium, phosphorus, C-reactive protein (CRP) and other serum parameter concentrations, venous blood samples were collected and after centrifugation at 3000g for 10 minutes (NF 800, Turkey), sera were stored at -80°C until the assay. Venous blood samples from HD patients were drawn in the morning of a mid-week dialysis session prior to heparinization. Venous blood samples were drawn from the control group after an over-night fasting period. Serum Fetuin-A levels were assessed by ELISA method (Epitope Diagnostics, Inc., San Diego, Calif., USA). AHSG (Fetuin-A) Thr256Ser and Thr248Met gene polymorphisms are determined by PCR-RFLP. Genomic DNA was extracted by use of the Wizard Genomic DNA purification Kit (Promega). Analysis of the Fetuin-A Thr248Met polymorphism was performed with the primers 5’- CCTCCCACAAGCAGAAAC -3’ and 5’- TGATGATTCCGCATACCC -3’. PCR was performed in a 50 mcL reaction volume containing approximately 65 ng of genomic DNA, 25 pmol of each primer (Biomers), 1.5 U of Taq DNA polymerase (Promega) in 1X Reaction Buffer supplied with the enzyme, and 0.25 mM of each deoxynucleotide triphosphate (Promega). The PCR conditions were as follows: initial denaturation at 95°C for 5 min; 35 cycles of denaturation at 95°C for 1 min, annealing at 56°C for 1 min, and extension at 72°C for 1 min; and a final extension at 72°C for 7 min. 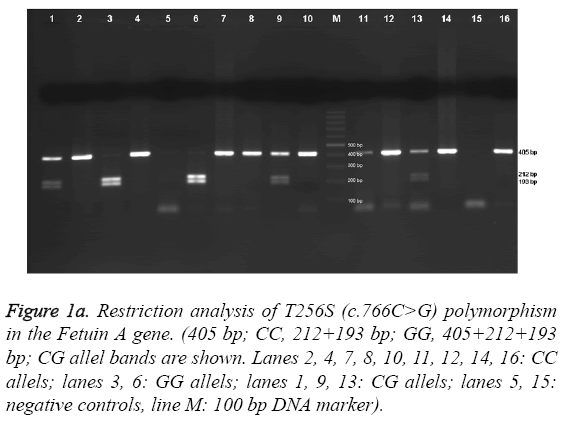 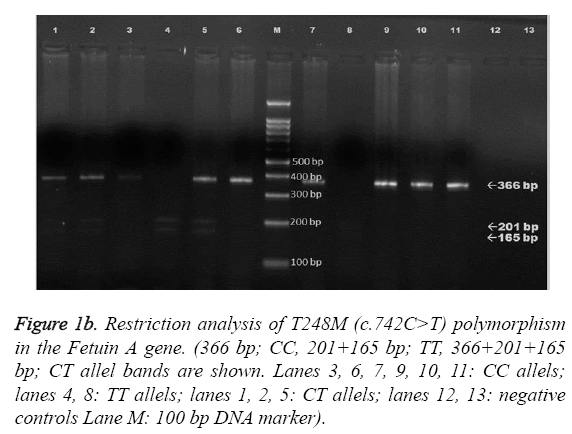 All continuous variables were tested for normality of distribution by using Kolmogorov-Smirnov test. Log transformation was performed for non-normally distributed variables. Continuous data were presented as mean ± standard deviation (SD). Categorical variables were compared using chi-squared test and shown as frequency and percentages. Comparisons of parametric data of three groups were performed with One-Way ANOVA test. Levene’s test was used to determine homogeneity of variances. Post hoc Tukey test (in case of homogeneity of variance) or Dunnett’s t3 test (in case of heterogeneity of variance) was used. Three group comparisons for non-parametric data were performed by Kruskal Wallis-test with post hoc Bonferroni Correction test; in this test statistical significance was accepted when p<0.016. Spearman or Pearson rank correlation tests were performed to determine the relationship between continuous variables where appropriate. The potential predictor factors of elevated Fetuin A level were evaluated using a multivariate linear regression analysis model based on significant correlations. Statistical analysis was performed using SPSS software (version 15.0 SPSS; Chicago, IL, USA). All p-values were calculated as twosided, and p-value<0.05 was considered as significant.

There was a significant negative correlation between Serum Fetuin-A levels and CRP (Pearson's r=-0.28, p<0.0001) (Figure 2). However, no significant association was found between serum Fetuin-A levels and albumin levels, dialysis duration, parathyroid hormone (PTH), low-density lipoprotein (LDL) and calcium–phosphorous product (p>0.05, for all). As shown in Figure 3 and Figure 4, the distribution of AHSG Thr256Ser and Thr248Met gene polymorphisms in HD and control groups were similar (p=0.11 and 0.56, respectively). 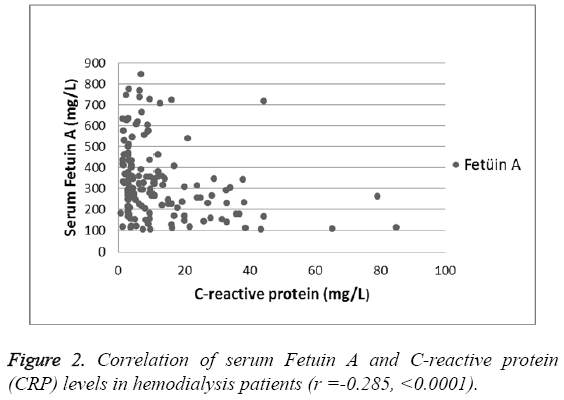 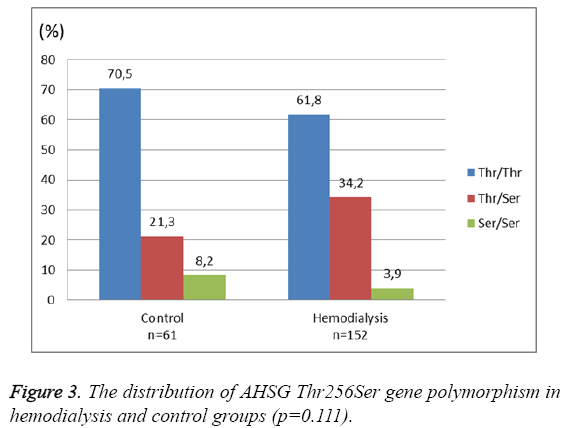 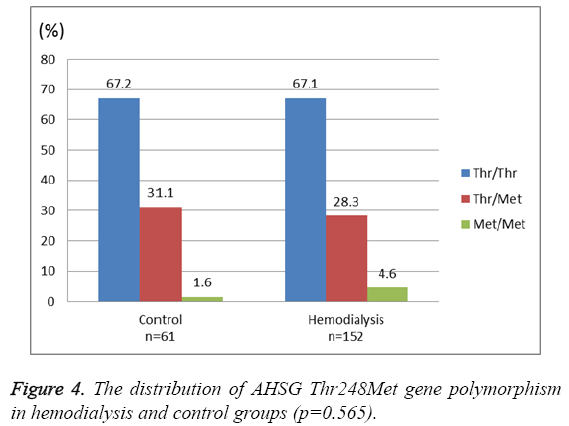 The patients with advanced CKD usually have a generalized vascular ossification process that is an important predictor of death. There is substantial evidence indicating that fetuin-A is an important inhibitor of ectopic calcification [11,15]. Consistently, it is demonstrated that deficiency in fetuin-A is contributing to this vascular ossification process. In addition, fetuin-A is a negative acute phase reactant [16]. As the CKD patients, particularly patients on HD, are affected by a chronic inflammatory state, they are expected to have lower levels of serum fetuin-A. In some recent clinical studies, besides lower fetuin-A levels in HD patients, a reverse association was also observed between fetuin-A and CRP levels [12,17-19]. Our study has similarly revealed that serum fetuin-A levels were significantly lower than healthy controls and CRP levels were significantly higher than healthy controls. In addition, there was a negative correlation between fetuin-A levels and CRP. However, we could not demonstrate a correlation between fetuin-A and serum albumin levels unlike the previous reports [17,18]. Patients with low albumin levels were excluded and the mean albumin level of HD patients was 4.06 g/dl in our study. So, we assume that they were relatively well-nourished and this point probably cleared off the anticipated association between fetuin-A and albumin.

It has been demonstrated that serum Fetuin A levels are influenced by some AHSG gene polymorphisms both in vitro and in vivo [13,15,20]. The most known allelic variant in clinical studies is the T256S. Several allelic variants of this gene, especially the T256S substitution, have been shown to be associated with reduced serum levels of the protein [21]. Stenvinkel et al. showed that a low fetuin-A level was associated with malnutrition, inflammation, atherosclerotic plaques and ESRD patients with 256Ser allele were at a higher risk for accelerated vascular calcification [13]. Moreover, this polymorphism was reported to be associated with all-cause and cardiovascular mortality in ESRD patients [13].

Our study is unique by studying both T248M and T256S polymorphisms in HD patients and additionally this is the first study on Turkish HD patients. According to our results, serum Fetuin-A levels did not differ between Thr248Met gene polymorphism genotypes. But T256S gene polymorphism was found to be an independent predictor of serum fetuin-A level and Thr/Ser and Ser/Ser subgroups had significantly lower levels of fetuin-A when compared with Thr/Thr genotype subgroup. So our results confirm the previous findings reported by Stenvinkel et al. [13]. Based on these findings, we suggest that CKD patients receiving HD treatment have already a reduction in serum fetuin-A levels and moreover lower levels of fetuin-A seems to be associated with alteration in the distribution of AHSG T256S polymorphisms.

A chronic inflammatory state and malnutrition can probably be counted among the major causes of low fetuin level in CKD patients, especially for ESRD patients on HD. Therefore, it seems that attempts on treatments for increasing fetuin-A levels and eliminating malnutrition in the HD patients may be helpful in some degree in preventing pathological calcification process. From this point of view, we suggest that clinicians engaged in CKD and dialysis treatments should be more attentive for patients with Thr/Ser and Ser/Ser genotypes of AHSG T256S polymorphisms in order to prevent excess vascular calcification. Perhaps measures like avoiding calcium based phosphate binders or setting lower dialysate calcium will be practical clinical implications for this more risky group if this evidence can be confirmed with further studies.

The present study has several limitations. First limitation is somewhat small number of the study population. A considerable number of HD patients have been excluded due to active infections, inflammatory disorders or severe malnutrition which could have potential effects on serum fetuin-A levels. Secondly, we did not demonstrate the effect of genetic polymorphism on vascular calcification and we did not put forward any clinical outcome of these allelic variations. Thirdly, our study has a cross sectional design and it lacks long term clinical follow-up.

In conclusion, the current study showed that HD patients with altered polymorphism of the AHSG T256S gene appear to be a negative prognostic factor on serum Fetuin-A levels. In other words, it can be speculated that fetuin-A Thr256Ser gene polymorphism, particularly genotypes Thr/Ser and Ser/Ser, may be an additional promoting risk factor for vascular ossification in HD patients. More investigations are required to elucidate the role of AHSG gene polymorphisms on Fetuin-A serum levels and particularly on clinical outcomes in HD patients.

This study was carried out with the support of Suleyman Demirel University Scientific Research Projects Coordination Unit.

The authors have no financial disclosures to declare and no conflicts of interest to report. The authors are responsible for the content and writing of the paper.