Background: Concerns regarding the potential physiological effects of exposure to radio frequency (RF) radiation have been increased recently.

Objective: This study explores a relationship between the use of mobile phone and auditory problems and the gender difference among medical students in Taibah University in Al Madinah Al Monawarrah.

Methods: A cross-sectional study was conducted at Faculty of Medicine, Taibah University, Al Madinah Al Monawarrah, and Kingdom of Saudi Arabia during the year 2013-2014. For this purpose a questionnaire was used as data collection tool.

Mobile phones (cellular telephones) have many perceived benefits, including increased accessibility and social connection, efficiency in the workplace, convenience, and improved safety. However, in recent years, there has been increasing public interest in the negative consequences of mobile phone use [1]. Mobile phones emit radio frequency or microwave radiation. Exposure to such radiation could affect health directly. There is concern that microwaves might induce or promote cancer, and the symptoms associated with their use include sleep disturbance, memory problems, headaches, nausea, and dizziness [2]. Changes in the permeability of the blood-brain barrier, electroencephalographic activity, and blood pressure have also been reported [3]. The use of mobile phones also results in indirect effects, such as car accidents.

In one Saudi Arabian study, 44.4% of participants related common health complaints such as headache, trouble concentrating, memory loss, hearing loss, and fatigue to their mobile phone use. Another Saudi Arabian study suggested that 3%-4% of mobile phone user’s exhibit problems such as tension, fatigue, sleep disturbance, and dizziness related to their mobile phone use, and over 20% complain of headaches [4]. Accidents caused by distracted driving [5,6] have been highlighted as a public health concern. So, the aim of this study was to assess the auditory disturbances accompanying the use of mobile phone among medical students in Taibah University.

This cross-sectional descriptive study was conducted in the Department of Physiology, Faculty of Medicine, Taibah University, Al Madinah Al Monawarrah, Kingdom of Saudi Arabia on September- November at the academic year 2013- 2014. Data were collected from 239 male and female medical students from the first, second and third academic years. A self-administrated questionnaire was developed after extensive literature review. A group discussion was conducted with other staff members to brainstorm and come up with a suitable data collection tool. The questionnaire was designed in English language containing questions enquiring about age, gender, academic level, type of mobile phone, the duration of usage of the mobile phone, the average duration of call any past history of auditory problem, and the feeling of vertigo, tinnitus, dizziness and hearing loss during or after the call and if is this related to the duration of mobile phone call. This questionnaire was distributed to the students. The participation was voluntary and the student agreements were taken before the study.

Data were analysed by the SPSS version 16.0 (SPSS, Inc. Chicago, IL). Frequency tables were used to present the distribution of nominal variables. Results were expressed in numbers and percentages of respondents to each question and presented in a table. Non-parametric Chi-square test was used. A p-value less than 0.05 were considered statistically significant (Figure 1). 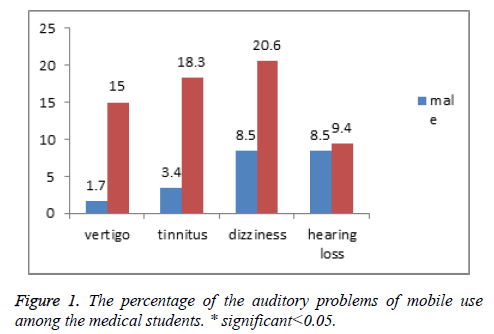 Figure 1: The percentage of the auditory problems of mobile use among the medical students. * significant˂0.05.`

There were 239 responses from the total population of 400 students with a response rate of 59.8%. Study population was distributed as follows: male students totalled (24.7%) and female (75.3%) as shown in Table 1, which is in keeping with the gender distribution of the college. The mean age was 20.5 years, ranging from 18 to 23 years. The students were distributed almost equally in the three academic years; however, the number of responses from the male side was less because of inaccessibility due to the separate campuses.

Meo and Al-Drees showed an association between the use of mobile phones and hearing and vision complaints [8]. About 34.59% of problems were related with impaired hearing, ear ache and/or warmth on the ear. Schuz et al. found a weak, but statistically significant, association between cell phone use and migraine and vertigo [9]. Exposure to radio frequency (RF) radiation waves may have a negative impact on the tissues that are near the handset, such as the auditory nerve. These risks include tumours, acoustic neuromas, and other potential concerns [10]. Audiologic disturbances may be increased with increases in cell phone usage. Other factors may be related to the duration of exposure to radiation or the condition of a person’s central nervous system and immune system [11]. Panda et al. found that High-frequency loss and absent distortion product otoacoustic emissions were observed with an increase in the duration of mobile phone use, excessive use of mobile phones, and age more than 30 years. They concluded that long-term and intensive mobile phone use may cause inner ear damage.

In contrast of the result of the current study, Davidson HC, Lutman ME found no harmful effects of mobile phone usage on their audio vestibular systems within the range of exposure of the study. Moreover, Frei et al. did not observe an association between radio frequency electromagnetic fields (RF-EMF) exposure and non-specific symptoms or tinnitus. Concerns regarding the potential physiological effects of exposure to radio frequency (RF) radiation have been increased. These waves may have a negative impact on the tissues that are near the handset, such as the auditory nerve. These risks include tumours, acoustic neuromas, and other potential concerns [10]. Audiologic disturbances may be increased with increases in cell phone usage. Other factors may be related to the duration of exposure to radiation or the condition of a person’s central nervous system and immune system [11].

This study showed that 74.6% of the male students while 65% of the female students use the phone with weak signal. Quiring stated to pay close attention to the signal bars on the display panel of the cell phone [12]. Fewer bars indicate a weaker signal. A weaker signal means the cell phone will generate more power to maintain the connection. In fact, for each bar lost due to poor signal strength the cell phone will increase its power by 1000% to maintain the connection. This study showed that a great percentage of the students are unaware of the risk of using mobile phone with weak signal. Limitations of the study are the use of questionnaires only as the tool for measurement. Also, we depend on the student’s response to health problems rather than making sure if they are already affecting the results or not. But these limitations are due to the nature of the study and its basic drawings of the problem. But these problems are for further research.

Future direction: Advantages and disadvantages of mobile phones, Specific absorption rate and electric field measurements of mobile phones and Perception of usefulness of mobile phone shield are being considered for further studies. The authors say this possibility should be explored further and recommend that mobile phone use should be included in future investigations as a potential risk factor for developing ear diseases.

The researchers would like to acknowledge the medical students participate in this study.