Background: Acute Lymphoblastic Leukemia (ALL) is the most common childhood malignancies, representing nearly one-third of all pediatric cancers. Thrombomodulin is a membrane glycoprotein expressed on endothelial cells. Its plasma level depends on the integrity of the endothelium. Soluble thrombomodulin is derived from injured endothelial cells or proteolytically cleaved from thrombomodulin by proteases. In the past, the endothelium was considered to be inert, described as a 'layer of nucleated cellophane', with only non-reactive barrier properties. However, it is now becoming clear that endothelial cells actively and reactively participate in hemostasis and immune and inflammatory reactions. They regulate vascular tone via production of nitric oxide, endothelin and prostaglandins. Severe endothelial dysfunction is present during the acute phase of acute lymphoblastic leukemia and it result from the disease itself, from treatment, or from other conditions (e.g. sepsis).

Objective: The aim of this study was to determine the level of serum soluble thrombomodulin as a marker of endothelial activation in children with ALL at time of diagnosis and after the chemotherapy.

Results: In children with acute lymphoblastic leukemia, there was a significant increase in soluble thrombomodulin levels during the acute phase of the disease and during treatment.

Conclusion: Severe endothelial dysfunction is present during the acute phase of ALL and during treatment and appears to result from the disease itself and from the treatment.

Acute lymphoblastic leukemia is one of the most common childhood malignancies [1], representing nearly one-third of all pediatric cancers with a peak incidence in children aged 2-5 y [2].

Thrombomodulin (TM) is a cell surface-expressed transmembrane glycoprotein originally identified on vascular endothelium [3]. TM is a glycosylated type I transmembrane molecule of 557 amino acids with multiple domains. Each domain possesses distinct properties. The molecule consists of an NH2-terminal lectin-like region followed by six tandem Epidermal Growth Factor (EGF)-like structures, an Oglycosylation site-rich domain, a transmembrane domain, and a cytoplasmic tail domain. It is a cofactor for thrombin binding that mediates protein C activation and acts as an anticoagulant factor. In addition to its anticoagulant activity TM also possesses antifibrinolytic, cytoprotective and antiinflammatory activities [4-7]. TM is present in the body in two forms with different molecular weights. The first type has a higher molecular weight, and it is bound to cytoplasmic membrane of endothelial cells; the second form has a lower molecular weight and represents the soluble or plasmatic form. The soluble Thrombomodulin (sTM) is derived from injured endothelial cells or proteolytically cleaved by neutrophil elastase and by other substances produced during acute and chronic inflammatory responses, immunologic reactions and complement activation [8-10].

Severe endothelial dysfunction is present during the acute phase of acute lymphoblastic leukemia This dysfunction can result from the disease itself, from treatment, or from other conditions, e.g. sepsis [11,12].

We studied 30 patients (17 girls and 13 boys) newly diagnosed with ALL (26 B cell and 4 T cell) aged 1-13 y and a control group which consisted of 20 healthy children matched for age and sex.

Samples were collected at time of diagnosis and on day 35 after induction phase of chemotherapy which includes Glucocorticoids (GC), L-Asparaginase (l-ASP), Vincristen (VCR) and anthracyclines (Danurobicine).

Two milliliters of venous blood were obtained from patients. Samples were collected into tubes preloaded with sodium citrate and then Platelet-poor citrated plasma was obtained from venous blood by centrifugation at 3000 revolutions per min for 10 min. Plasma was then aliquoted and frozen at -70°C for subsequent batch analysis. 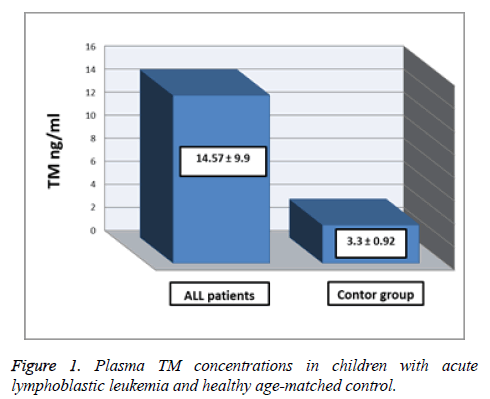 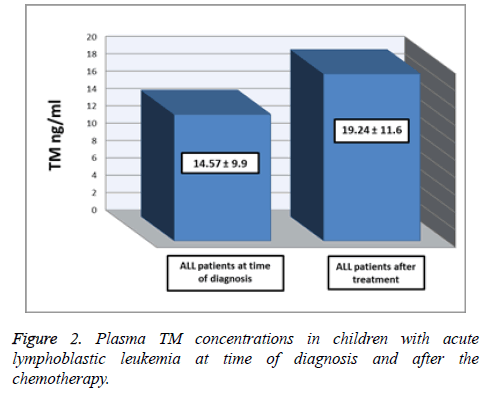 Figure 2: Plasma TM concentrations in children with acute lymphoblastic leukemia at time of diagnosis and after the chemotherapy.

Table 2. Plasma TM concentrations between children with acute lymphoblastic leukemia at time of diagnosis and after the chemotherapy.

It is well is known that TM is a sensitive indicator of vascular injury [12]. In this study plasma levels of sTM were determined as indexes of endothelial dysfunction in children with acute lymphoblastic leukemia.

Mean plasma TM levels done before chemotherapy were significantly higher in ALL patients than control. This is in agreement with Hatzipantelis et al. [12], Hagag et al. [13] and Hatzipantelis et al. [14], who found the significant increase of TM levels in the acute phase of the disease in children with ALL, and concluded that this confirms the serious dysfunction of the vascular endothelium, resulting from the disease itself.

Mean plasma TM levels were significantly higher in ALL patients after a chemotherapy compared to ALL patients at time of diagnosis. This is in agreement with Pascale Schneider et al. [15] who found the significant increase of TM levels during treatment of children with acute lymphoblastic leukemia. And Giordano et al. [16] who found that chemotherapy cause endothelial damage in children with ALL.