Objective: Obesity is a growing problem of public health in developed and developing countries, and its prevalence is increasing in Turkey. Neutrophils play an important role in inflammation. C-Reactive Protein (CRP) is an important mediator in inflammation. In our study, we aimed to compare the changes in CRP levels and Neutrophil Lymphocyte Ratio (NLR) in obese individuals.

Methods: Totally 298 individuals (251 female and 47 male) were included in the study. Patients were divided into three groups according to Body Mass Index (BMI) values. Serum neutrophil and lymphocyte levels and CRP levels were measured.

Conclusion: There is no statistical significance between neutrophil lymphocyte levels and BMI groups. In our study, the use of CRP as an indicator of inflammation in obese younger individuals is more useful than n/l ratio.

The 10-15% of body weight in males and 15-20% in females constitute fat tissue. Fat tissue has functions such as storage of fat soluble vitamins, physical protection, energy storage, and thermogenesis. Obesity is the result of the excessive increase of the fat tissue [4]. Adipose tissue is a fat support and an endocrine organ. In addition, it is effective in the metabolism and energy balance of the macronutrients [5].

Obesity is a multifactorial disease resulting from genotype and environmental interaction [6]. It is associated with many diseases such as diabetes, hypertension, dyslipidemia, atherosclerosis, and malignant diseases [1]. Obesity causes subclinical inflammation [7]. Although inflammatory processes at the onset of obesity are not very clearly defined, it has been known that leukocytes play a very important role in inflammation [8].

Lately, there has been a lot of evidence supporting the association between obesity and inflammation. Studies have focused on adipokines, macrophages, adiponectin, and immunocytes in fat tissue [9]. The increase in bioactive peptides produced in obesity affects the development of hypertension (angiotensinogen), impaired fibrinolysis (plasminogen activator inhibitor-1), and insulin resistance (acylation-stimulating protein, tumor necrosis factor, Interleukin-6, resistin) [10].

CRP is an important marker of inflammation. In recent years, CRP has begun to be used as an inflammation marker in the neutrophil lymphocyte ratio [11].

Neutrophils are the most important mediators of natural immunity. In the initial defense against pathogens, neutrophils are effective in the acute inflammatory response. Neutrophil lymphocyte ratio is a simple, inexpensive, and effective marker of inflammation. It is associated with many inflammatory and malignant diseases.

CRP is the most important acute phase protein. CRP is a protein released from secondary hepatocytes in response to interleukin 6, interleukin 1α, and tumor necrosis factor β induction [12]. CRP is an important effector in an immune response in obesity [13].

It has been shown in a large number of studies that there is a relationship between obesity and CRP levels [14]. Leukocyte count and high-sensitivity C-reactive protein (hs-CRP) indicate inflammation [15]. CRP increases in many inflammatory, infectious, and malignant diseases [16].

In this study, Amasya University Sabuncuo?lu ?erefeddin Training and Research Hospital patient database was used. The study was conducted between January 1, 2016 and 31 December 2016 with patients who applied to the internal diseases outpatient clinic. In this study, we aimed to compare the neutrophil lymphocyte ratio and C-reactive protein levels in young obese subjects. The liver enzymes and blood creatinine levels of the patients were normal. HGB, HCT, MCV, MCH, MCHC were also in the normal range. Patients with anemia, heart failure, renal insufficiency, hypothyroidism, and hyperthyroidism were excluded from the study. Totally 298 patients were included in the study. The body mass index values were calculated by dividing the height values to the square of the body weight values. Patients were divided into groups according to their body mass index values. Neutrophil lymphocyte ratio and C-reactive protein levels were compared between the groups. Of all patients, 23 (16.5%) and 116 (83.5%) of them who had BMI values less than 30 were respectively males and females. Furthermore, 24 (17.4%) and 114 (82.6%) of them who had BMI values between 30 and 39.9 were respectively males and females. Finally, 21 (100%) of them who had BMI values 40 or more were females.

Table 1. Gender differences according to the body mass index values. 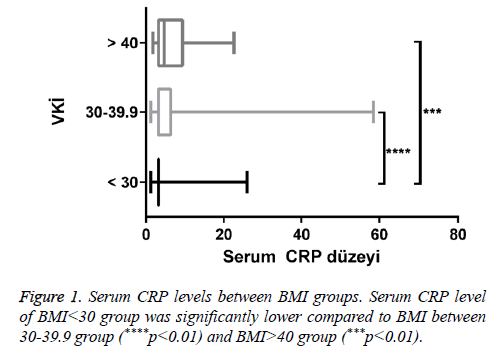 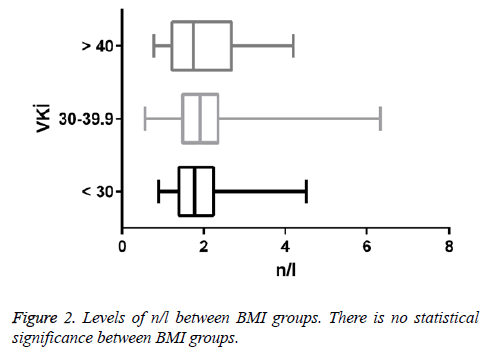 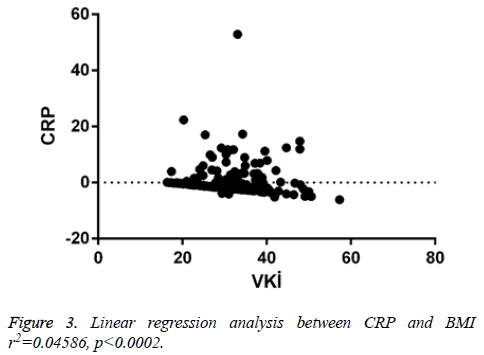 Table 2. Analysis of correlation between parameters.

When linear regression analysis was performed, 0.1% of the very low increase in n/l was attributed to the increase in body mass index (r2 =0.001510) (Figure 4). 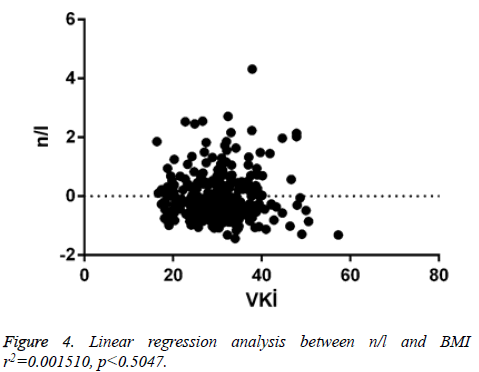 Trellakis et al. investigated the role of neutrophils in obese patients and the regulation of neutrophils by adiponectin. Elevated levels of neutrophil lymphocytes, high-sensitivity Creactive protein, chemokines (such as CXCL8, CCL3, CCL5), apoptosis markers (such as M30 and M65), and some neutrophil products have been shown to be an indicator of inflammation in overweight and obese individuals [9].

In a study conducted by Nijhuis et al. neutrophil activation markers such as calprotectin were studied in 37 severe obese and 9 normal overweight patients. The levels of these markers were significantly higher in obese group compared to the healthy group [17].

Kim et al. studied with 104 Korean patients who were between the ages of 34 and 60. It was shown that higher CRP levels have been shown to be associated with central obesity even in low-risk individuals [19].

Furuncuo?lu et al. performed a study and investigated the effect of obesity on n/l and platelet/lymphocyte ratio in 223 patients who were between the ages of 18 and 65. It was observed that WBC, neutrophil, lymphocyte, and platelet counts were easily affected by BMI [20].

Bahad?r et al. conducted a study with 1267 patients with obesity and metabolic syndrome. It was shown that there was a significant increase in CRP level with BMI and there was no increase n/l ratio [15].

According to the results of the 9 y study, Laurson et al. found that there was an increase in CRP levels and white blood cells in subgroups [21].

Lao et al. found a strong association between the number of neutrophil lymphocytes and the metabolic syndrome in a study involving 3020 men and 7256 women.

In this study, we aimed to compare the neutrophil lymphocyte ratio and C-reactive protein levels in young obese individuals. There is no statistical correlation between neutrophil lymphocyte ratio and BMI groups. However, even it is too low, there is a positive correlation between BMI and n/l. The reason of this is that leukocytes may also play an important role in the inflammatory response. CRP levels were significantly higher in the BMI<30 groups compared to BMI between 30-39.9 and 40 BMI>40 groups. In our study, we found a positive correlation between BMI and CRP. Obesity is an inflammatory process and this suggests that CRP, one of the important markers of inflammation, may increase. When linear regression analysis was performed, 4.5% of the high CRP level was attributed to an increase in BMI. Furthermore, 0.1% of the very low increase in neutrophil lymphocyte rate was attributed to an increase in the BMI. CRP and n/l ratio can be used as markers in obese individuals. It was found that the increase in n/l was lower than that of CRP. In our study, the use of CRP as an indicator of inflammation in obese younger individuals was more useful than n/l ratio.

There were limitations in our study. For instance; there were a limited number of patients. We also did not have information about patient’s diets, smoking habits, daily activities, and their effort statuses. Factors such as gender and age may affect the subclinical inflammation and gender distribution was not the same in all groups. In addition, there was no male patient in the BMI>40 group. These can be considered as the weak points of the study.