Methods: Rats were fed with different doses of the cellulose coupled with high fat diet containing cholestyramine as positive control. After 5 weeks, we detect the serum levels of alanine aminotransferase (ALT), aspartate aminotransferase (AST), total cholesterol (TC) as well as total triglycerides (TG), and the activities of malonaldehyde (MDA), superoxide dismutase (SOD), hepaticlipase (HL), lipoprteinlipase (LPL) and then we observed the pathological changes in the liver.

Results: P. eryngii cellulose could significantly decrease the ALT, AST, TC and TG serum levels (P<0.01), and improve the activity of SOD and HL while significantly inhibit MDA (P<0.05) in a dose dependent manner. In addition, the histopathological test showed that the livers were milk-yellow and bigger in negative group (rats were not treated with cellulose), and there was no fatty generation or vacuoles in the livers in administration group.

Conclusion: The preventive effect of the cellulose is similar to the cholestyramine (P<0.05). All results indicated that the cellulose of Pleurotus eryngii has the potential effects on preventing the fatty liver in rats with hyperlipemia.

Non-alcoholic fatty liver was not the benign or stationary lesion, which could change into irreversible liver damage in a short time, and then develop into fatty hepatitis, fatty hepatic fibrosis, and fatty cirrhosis [2]. Therefore, it is important to prevent and treat this type fatty liver.

Pleurotus eryngii Que1, also known as the king oyster mushroom, was belonged to mycota, basdiomycotina, hymenomycetes, agarcales, pleurotaceae, agaricochaete [3]. Pleurotus eryngii was with hypertrophic, crisp and tender fleshy, and smelt like abalone and almond. There were abundant proteins, fibers, vitamins and minerals but low fat in Pleurotus eryngii, which were beneficial for human health.

Pleurotus eryngii could inhibit the hydrolysis methyl umbelliferone oleate and the emulsification of triolein, and decrease the absorbance of fat, and then decrease the triglyceride (TG) and total cholesterol (TC) levels in serum, reduce the damage of atherosclerosis, regulate the activity of T-helper, improve the generation of cytokines, decrease the invasion of inflammatory cells and mast cell, and release allergic dermatitis [5-8].

Additionally, Pleurotus eryngii could inhibit the growth of helicobacter pylori, Escherichia coli (E. coli), staphylococcus aureus and listeria strains, prevent from virus infection including H1N1, HSV-2 and so on [9-11].

Dietary fiber was partly or totally fermentation in colon, including polysaccharide, oligosaccharide, lignin and plant material, confirmed by Association of Official Analytical Chemists (AOAC) in 2001 [12]. It could adsorb fat and excrete outside to decrease the absorption of fat, which was helpful for treating obesity and relative disease [13].

Our study focused on the preventive effect of Pleurotus eryngii cellulose on fatty liver rats with hyperlipemia, in order to provide treatment obesity and healthy diet with evidences.

Observation and detection: After the last giving drug, the rats were fasted for 12 h, and then weighted and their vein blood was collected from tail. The serum was obtained after centrifuging at 3,000 × g for 5 min at 4°C. And the TG, TC, AST and ALT serum levels were detected with detection kits, separately. The rats were sacrificed by cervical vertebra dislocation. Their liver tissues were collected and weighted, and the left lobe of liver was fixed with 10% formalin, and then treated with the routine embedding with paraffin wax. The tissue was cut into 4 μm of sections and then stained with Hematoxylin-Eosin (HE). The right lobe was stored in liquid nitrogen. SOD, MDA, HL and LPL in liver tissue were detected according to liver index (%)=(wet liver weight (g))/(body weight (g)) × 100%.

All data were showed as mean ± standard deviations (͞x ± S) and analyzed by SPSS 19.0 software. A value of P<0.05 considered significant difference. 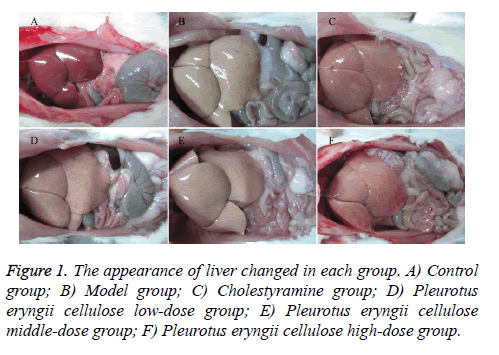 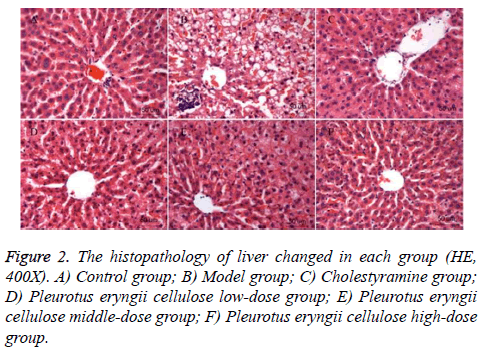 Table 1: The effect of PC on blood lipid and liver function in rat.

Liver index and relative enzyme activity after PC treatment: Comparing to MG, PC could improve after activity of SOD plus and HL, decrease the MDA content and did not have any effect on the activity of LPL, the deposition of lipid in liver tissue and the liver index induced by lipid metabolism disorder, significantly (P<0.01) (Table 2). The effects showed as dosage-dependence.

Liver was the main location of lipid metabolism. With high fat diet, the exogenous fat increased and the hepatocyte esterified, this led to the increasing of TG, decreasing of TG degradation and increase of TG flowing into liver. Excessive intake of cholesterol and free fatty acids would induce the damage of cytotoxicity and hepatocellular function and lead to the decrease of hepatocellular transport capacity of TG, which showed hepatic dysfunction and serum levels of TC and TG increasing abnormally [17,18]. Cholestyramine, as the preventive and positive control drug, showed multiple functions such as exchanging and absorbing the intestinal bile salts, blocking the enterohepatic circulation of cholic acid, accelerating the decomposing of cholesterol into bile salt and decreasing the TC levels. Additionally, the intestinal absorption of cholesterol needed the emulsification of bile salt. After the adsorption and excretion of bile salts, the re-adsorption of cholesterol was inhibited, causing decreasing of the TC.

In our study, after 5 weeks treated with PC, the serum TC and TG in the rats decreased significantly, and their ALT and AST recovered obviously. The preventive effect in PCHG was obvious, the same as the CG, which indicated that PC could reduce the absorption of exogenous fat and TC and TG serum levels to release the metabolic pressure of liver for fat. This result was consistent with the report of Wang et al., whose study showed that the dietary fiber could improve intestinal peristalsis, shorten the residence time of food in intestine, and reduce the absorption and metabolism of fat, and decrease TC and TG levels in liver [19].

It was still unclear about the pathogenesis of fat liver that was usually induced by the increase of synthesis and decrease of oxidation of hepatocellular fat. In our study, MDA in the liver tissue increased in MG group comparing to control group, while SOD activity decreased significantly (P<0.01), which indicated that the hepatocellular oxygen consumption increased and lots of free radicals increased leading to lipid peroxidation enhance and increasing of MDA. After treating with PC, SOD activity was improved in PCMG and PCHG, while MDA was inhibited significantly (P<0.05). This was in accordance with previous study, showing that PC was with the ability to clear the free radicals, improve the antioxidant capacity, regulate and improve the balance of metabolism of the free radicals [20].

In conclusion, PC had the abilities of improving antioxidant capacity of liver tissue, reducing the deposition of fat and preventing hyperlipidemia and fatty liver.