The prevalence of ? Thalassemia in South Western Maharashtra

The early identification of some clinically significant hemoglobinopathies and precise differentiation of hemoglobin variants are important to provide early comprehensive medical care to prevent some serious complications, assess prognosis and offer genetic counseling. A prospective study of 500 infants from South Western Maharashtra showed that 0.4% (4 in 1000) of them had detectable levels of Hb Bart’s (γ4) in the neonatal period by using hemoglobin electrophoresis. The levels of Hb Bart’s indicate that the newborns are heterozygous for α thalassemia (-α/αα).

The result of such unbalanced globin chain synthesis is the production of an excess of partner chains which are synthesized at normal rate, and most of the clinical features of the thalassemias can be related to the deleterious effects on erythropoiesis, caused by precipitation of the goblin chains that are produced in excess. [2,3]

If there is a reduced output of α chains, any excess of γ chains or β chains produced will give rise to molecules with the formula γ4 (Hb Bart’s) and β4 (Hb H), respectively. Hence the α thalassemias are usually associated with the presence of Hb Bart’s in infancy and Hb H in adult life.[4] We conducted a study to investigate the prevalence of α thalassemia in the South Western Maharashtra (India), because, there is no published report on prevalence of α thalassemia in this area

This is a cross sectional study to find out the prevalence of α thalassemia from south western Maharashtra region. Blood samples were collected randomly from successive infants from the Obstetrics department of the General Hospital, Sangli and Government Medical College & Hospital, Miraj and were analyzed at department of biochemistry. The written informed consent of mother was taken.

Our study included 500 newborns, all were normal at birth. Out of 500 cord blood samples examined 498 had no Hb Bart’s. Electrophoretic pattern of only 2 samples showed a fast migrating component. This band occupied a position taken up by Hb Bart’s. Analysis of samples showed that Hb Bart’s level was 3% of total Hb in 1st case and 6% of total Hb in 2nd case. 1st case showed Hb F level of 94% of and Hb A level of 3% while 2nd case showed 92% and 2% respectively.

The total hemoglobin content in these two samples was 14.8 gms/dL and 13.9 gms/dL respectively. The levels of Hb Bart’s in these cases were suggestive of heterozygous α thalassemia with single gene deletion (-α/αα). The incidence of α thalassemia in South Western Maharashtra is 0.4% (i.e. 4 in 1000).

No cases of homozygous α thalassemia or hydrops fetalis (--/--) were detected in sample size studied. The results are summarized in the following Table 1. 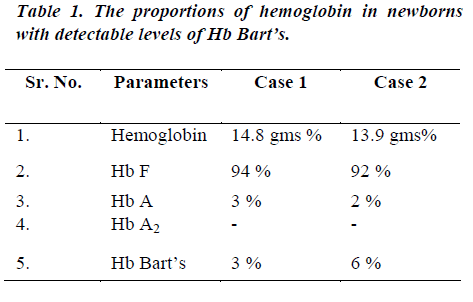 Table 1: The proportions of hemoglobin in newborns with detectable levels of Hb Bart’s. 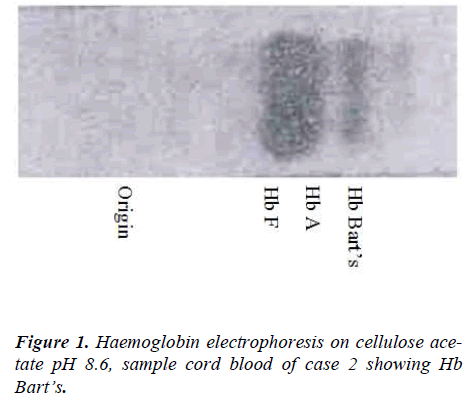 Hb Bart’s is a tetramer of γ chains (γ4). Most reports on incidence of alpha thalassemia among Indians are based on demonstration of Hb Bart’s in cord blood samples. [4] It is generally accepted that Hb Bart’s is formed because of defective synthesis of α chains. As a result there is relative excess production of γ chains. These polymerize to form γ4 tetramers, which are often associated with abnormal red cell morphology and hemolytic anemia. [3]

Hb Bart’s usually disappears by the age of four to six months but might persist beyond the first year of life after which a tetramer of β chains or Hb H makes its appearance. This happens because the rate of synthesis of γ chains rapidly declines with an increase in production of β chains. [7] A study by Fessas P. [8] showed 1-1.5% Hb Bart’s may be present in normal cord bloods, however according to Wasi P. [9] Hb Bart’s of 1-2 % in cord blood is indicative of α thalassemia trait.

The heterozygous α thalassemia diagnosed by the increased level of Hb Bart’s in cord blood, has been found in a number of racial and ethnic groups throughout the world. The prevalence of α thalassemia in India varies from one sub-geographical area to another. The prevalence is 71% in Behrampur, 42% in Jaipur and 11% in the nearby villages of Andhra Pradesh. [10]

Our study gives the incidence of α thalassemia 0.4% or 4 per thousand populations in South Western Maharashtra.

500 cord blood samples were investigated for presence of Hb Bart’s by using cellulose acetate hemoglobin electrophoresis at an alkaline pH. Out of 500 only 2 samples revealed a fast migration Hb Bart’s. The levels of Hb Bart’s were 3% and 6% which were an indication of cases of heterozygous α thalassemia or silent carrier state, thus giving the prevalence of 0.04% in South Western Maharashtra.