Biomarkers play important roles in the diagnosis and follow-up of ischemic diseases. This study investigated the predictive value of signal peptide-CUB-EGF domain-containing protein1 (SCUBE1) in rats with peripheral ischemia that were subjected to reperfusion. Forty rats were divided into five equal groups as follows (eight rats per group): a control group (to determine the basal levels of the markers), three ischemia groups (groups 1-3), and a reperfusion group (group 4). There were no significant differences in SCUBE1 levels between the control and ischemia groups. However, the SCUBE1 level was markedly higher in the reperfusion group than in the control and ischemia groups (p<0.05). The results indicate that SCUBE1 levels are not biomarkers of the induction of ischemia. However, they are potentially markers of reperfusion in rats with acute peripheral occlusions.

Ischemic exposure is an important determinant of tissue recovery, which in turn affects cellular metabolism. Critical limb ischemia is a frequent ischemic disorder, leading to amputations of the extremities if normal blood flow does not promptly resume [1,2]. High amputation (30%) and mortality rates (25%), together with unresolved pain and tissue loss (20%), have been reported in the literature [1]. Therefore, recent studies have focused on the identification of novel markers of the duration of ischemia and reperfusion in models of critical limb ischemia [1,3].

Signal peptide-CUB-EGF domain-containing protein1 (SCUBE1) is a surface membrane glycoprotein of human platelets and endothelial cells [4,5]. The levels of SCUBE1 have been reported to be higher in platelets than endothelial cells [5]. The α granules of inactive platelets store the protein. Upon activation by thrombin, the granules are translocated to the surface of platelets, proteolytically released, and incorporated into a thrombus as smaller soluble fragments [5]. SCUBE1 is released by endothelial cells in response to ischemic injury [6,7], and platelet activation and aggregation may be responsible for ischemic complications in patients with acute coronary syndrome and acute ischemic stroke [8]. SCUBE1 levels measured within 6 h after onset of ischemic symptoms have the potential to serve as an early-stage damage marker in patients with acute thrombotic diseases [8]. The roles played by SCUBE1 under ischemic conditions and during reperfusion demonstrate that SCUBE1 measurement can be useful when examining endothelial responses during hypoxia or after blood flow recovery.

In this experimental study, plasma SCUBE1 levels were investigated during peripheral ischemia and after reperfusion.

All procedures complied with the Animal Welfare Act and the Guide for the Care and Use of Laboratory Animals. Before the study commenced, all procedures were checked and approved by the local animal ethical committee.

Forty male albino Wistar rats weighing between 250 g and 275 g and aged 12-14 weeks were included. All rats were obtained from the Laboratory Animal Production Unit of our university. Prior to the study, the animals were maintained in standardized cages under constant humidity (50 ± 5%) and temperature (22 ± 2°C) with a 12 h/12 h light/dark cycle.

Five groups were created, with eight rats in each group. All rats were anesthetised with ketamine (Ketalar, Pfizer) at a dose of 130 mg/kg and xylasine (Rompun, Bayer) at a dose of 20 mg/kg via an intraperitoneal catheter. Anesthesia was maintained with ketamine hydrochloride (50 mg/kg). The ischemia/reperfusion model was similar to those previously described by Saray et al. [9] and Yavuz et al. [3] and featured 8 h of ischemia followed by 60 min of reperfusion upon clamping of the femoral artery. In all groups, the rats were sacrificed immediately after blood samples were taken.

The procedures performed on each group were as follows:

Control group (n=8): Intracardiac blood samples were obtained to determine the baseline values of the biomarkers; we did not perform any intervention.

Group IV (n=8): Peripheral ischemia was created for 8 h by clamping the right femoral artery via a simple femoral incision. After 8 h of ischemia, reperfusion was induced for 1 h, and intracardiac blood samples were obtained during this first hour of reperfusion.

All analyses were performed using SPSS version 15.0 (SPSS Inc., Chicago, IL). Continuous variables are expressed as means ± standard deviations or as medians with the 25th–75th percentile ranges (when the parameters were normally and not normally distributed, respectively). In each group, follow-up comparisons (control; and 2, 4, and 8 h after reperfusion) were performed using Friedman’s two-way analysis. A two-tailed p<0.05 was considered significant. 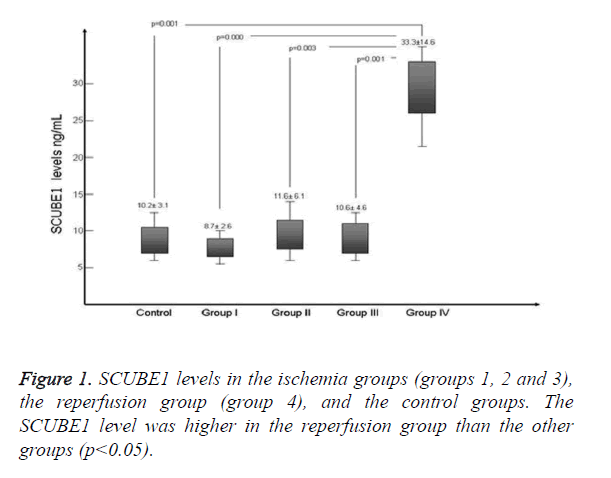 SCUBE1 is a novel biomarker secreted by platelets and endothelial cells, and has been studied in the context of various types of tissue ischemia and reperfusion injury [9,10]. These studies have demonstrated that SCUBE1 is highly expressed in various developing tissues (gonads, the nervous system, somites, the surface ectoderm, and limb buds) of mouse embryos and that the protein is secreted from human vascular endothelium at various sites around the body [4,6,11]. SCUBE1 levels in hypertensive crises [12] and in patients with acute coronary syndrome have been investigated [8,13]. Turkmen et al. [10] reported that SCUBE1 levels were elevated in an experimental mesenteric ischemia model. It was concluded that enhanced platelet activation might contribute to the rise in SCUBE1 levels noted in mesenteric ischemia. However, we did not detect any significant elevation in SCUBE1 levels during 8 h of peripheral ischemia. On the other hand, the SCUBE1 level was clearly elevated in the reperfusion group. Zhuang et al. [7] reported that SCUBE1 played an important role after renal ischemia-reperfusion injury. It was claimed that SCUBE1 might be involved in regeneration, combined with regulation of tubular cell proliferation and re-epithelialization of damaged kidneys following ischemia-reperfusion injury. We suggest that an elevated SCUBE1 level may be an indicator of platelet activation and may also predict endogenous remodeling.

SCUBE1 is a novel biomarker and the SCUBE1 level may vary significantly in other ischemia-reperfusion models including renal, liver, or gastrointestinal ischemia. We have not yet used other animal models to address this issue. Another limitation is that we did not measure the levels of mRNA encoding SCUBE-1 in the peripheral vascular tissue of rats exposed to ischemia and reperfusion. In addition, we did not determine whether peripheral SCUBE-1 injection could alleviate ischemia or reperfusion injury in rats. Thus, this is a preliminary study of the utility of SCUBE1 as a biomarker of ischemia-reperfusion injury induced by clamping the femoral artery. More work is needed to validate our results.