Urinary tract infection is a commonly encountered problem in clinical practice. Diagnosis is usually reached by considering compatible symptoms, microscopy and culture of urine samples. We carried out a retrospective study of records of patients established to have urinary tract infection at King Khalid University Hospital, Riyadh. The results showed the infection predominantly occurring in female patients comprising 74.2 per cent. The overall positivities/positive predictive values for urine nitrites were 49.7per cent and 95.4 versus 5.5 per cent and 2.3 for gram-negative and gram-positive organisms respectively. The proportional significance of nitrite positivities for both gram-negative organisms versus grampositive organisms and yeast were 0.50 versus 0.06 and 0.50 versus 0.09 respectively (p value<0.001) while the difference between gram-positive organisms and yeast 0.06 versus 0.09 was insignificant (p>0.50). We therefore recommend that the presence of positive nitrites predict the likelihood of gram-negative as a causative agent in urinary tract infections. However, nitrites should not be used as screening test in view of the low sensitivity across all types of organisms.

Urinary tract infection (UTI) is characterized by compatible symptoms and significant bacteriuria. Significant bacteriuria is defined as ≥104 colony forming units per milliliter (CFU/mL) plus pyuria or ≥105 CFU/mL in complicated UTI with or without pyuria [1]. The organisms encountered are mostly from the gastrointestinal tract. UTI is one of the leading infections encountered in clinical practice [2]. Furthermore, the mortality of patients with urosepsis ranges between 25 and 60 percent [3]. There are reported gender disparities as more than 50% of women will have at least 1 episode of UTI in their lifetime [4], while 20% of all cases occur in men [5]. This is due to short urethra and proximity of the urethra to the anal orifice. On the other hand, in men, apart from the long urethra there are resistant prostatic secretions. However, this disparity narrows in the elderly and almost nonexistent during infancy [6]. These are mainly due to certain factors like prostatic enlargement, decreased secretions, frequent instrumentation in older population and hormonal changes in women [7,8].

Presence of compatible symptoms and laboratory investigations are required to confirm the diagnosis of UTIs. The urine nitrites test is readily available and was previously assessed as a rapid screening test [9,10,11] for significant bacteriuria. The overall sensitivity of urine nitrite for Gram-negative organisms in meta-analysis was found between 45-60 per cent while specificity ranged from 85- 98% [10,11]. Various species of Gram-negative bacteria are known to convert nitrate to nitrite through the enzyme reductase. However other groups of microorganisms do not possess this ability.

Few studies are currently available on the potentiality of the test to predict the microorganisms responsible for UTI [12]. Therefore this study was done to reassess the predictive value of urine nitrite test as a screening tool for UTI and its ability to pinpoint the likely causative organism.

A retrospective study of files of all first documented episode of UTI recorded in consecutive patients (≥13 years old) seen at King Khalid University Hospital, Riyadh, Saudi Arabia, between January and March, 2008 was undertaken. The charts were reviewed from details of records from the files and details from both medical records and microbiology units of the hospital. All patients re viewed to have compatible symptoms and positive urine cultures (≥105 CFU/mL) were enrolled in the study. Clinical and laboratory diagnoses of UTI were based on previously established criteria and methods [13,14]. Patients were excluded if white blood cells in samples were less than 20 per high power field or a bacterial pathogen cultured is deemed to be a contaminant for instance lactobacillus or diptheroids. The data was analysed using SPSS version 12 statistical package. Levels of significance between variables were determined at p<0.05 using the chisquare test. Sensitivity and predictive values were derived using previously validated methods [15].

Four hundred and sixteen records of patients were reviewed and fulfilled our enrollment criteria. The breakdown comprised 342 female patients (74.2%) and 119 male patients (25.8%) as shown in Table 1. Most of the female patients were among the pre-menopausal and reproductive group of 15-54 years constituting 232 patients (50.3%). The proportional difference between the genders was less evident beyond the above 65 years old groups 26 versus 34, 24 versus 17 and 10 versus 7 for males and females respectively (p 0.50). 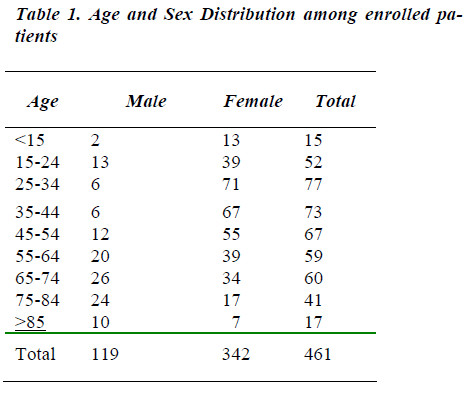 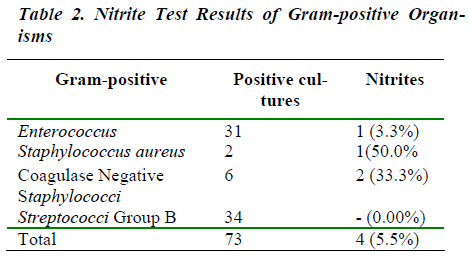 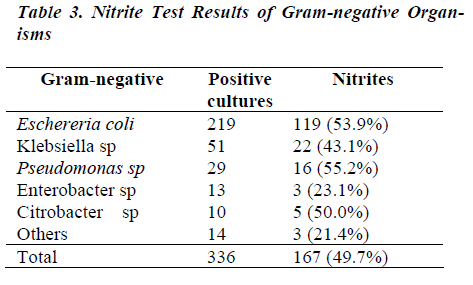 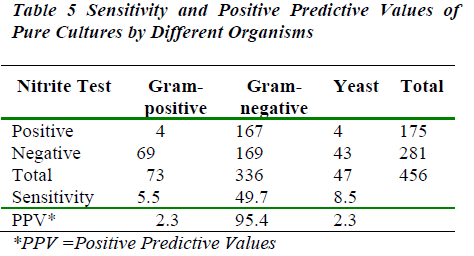 The study confirms the previous demographic characteristics of gender difference in the prevalence of UTI [4,5]. In addition, the pattern of less distinct gender proportionality in the aged as documented previously was also noticed in this study.

A meta-analysis among patient groups and various settings of hospital practice had shown the sensitivities of urine nitrite ranging from 45-60 per cent [10] which is in agreement with our finding. This study also demonstrated an overall sensitivity 49.7% among gram-negative organisms which is within the range of previous studies [11]. Conversely, the overall sensitivity for gram-positive organisms was 5.5% with Enterococcus recording 3.3%. This is fairly consistent with the previously recorded percentage [12].

Despite the low sensitivity, the high positive predicitive value of 95.4% and the statistically significant proportional differences between gram-negative and other organisms can guide clinicians in selecting antibiotics for both uncomplicated and complicated UTI. However serious conditions like acute pyelonephritis and urosepsis requires empirical treatment with antibiotics which cover both gram-negative and gram-positive pathogens [16].

A positive nitrite was shown to significantly predict gram-negative organism as the likely causative agent of UTI. In clinical practice, this will help in guiding physicians in empirical treatment before the availability of culture and sensitivity patterns. On the other hand, negative nitrite test in the setting of critically ill patients and in the absence of previous cultures, will necessitate the choice of both gram-negative and gram-positive coverage. In view of the low sensitivity of urine nitrite across all groups of organisms, the test is not suitable as a screening tool. It should be considered only as a simple and rapid test routinely utilized before obtaining final results from cultures.

Predictive and discriminant values of urine nitrites in UTI