The possible mechanism of action of palm oil ?-tocotrienol and ?-tocopherol on the cervical carcinoma CaSki cell apoptosis

Palm oil vitamin E consists of two groups of structurally-related fat soluble compounds, α-, γ-, δ- tocopherols (78% to 82%) and (18% to 22%) α-, γ-, δ- tocotrienols [1]. The unique differences in the unsaturated isoprenoid tail is be-lieved to enable tocotrienols to display efficient anti-cancer activity compared to that of the saturated tocopherols [2].

The mechanism of the chemotherapeutic properties of vi-tamin E may be mediated via the repression of cell prolif-eration, blockage of cell cycle at G1-S transition phase, reduction in DNA synthesis or induction of apoptosis [5-8]. Of these postulated mechanisms, apoptosis has been studied most extensively [9].

Apoptosis-associated activation of transforming growth factor-β (TGF-β) and Fas/CD95 signaling pathways up-stream the JNK activation. Once activated, JNK will then phosphorylate the transcription factor, c-Jun and mediated the translocation of Bax to mitochondria resulting in the released of cytochrome c, Caspases activation and apop-tosis [10-13]. Studies have shown that δ-tocotrienol in-duces apoptosis in human breast cancer cells, MDA-MB-435 via stimulation of the TGF-β, Fas- and JNK-signaling pathways [13].?VES has also been shown to induce apop-tosis in human breast cancer cells via translocation of Bax from the cytosol to the mitochondria and releasing cyto-chrome c from the mitochondria to the cytosol [12]. An-other study has demonstrated that VES also induces apop-tosis in prostate cancer cells through inducing Bcl-xL/Bcl-2 function [8]. Gamma-tocopherol alone or in combination with δ-tocopherol, induces apoptosis in androgen-sensitive (LNCaP) but not in the androgen-resistant (PC-3) human prostate cancer cells through the induction of cytochrome c release, activation of caspase-9 and -3, cleavage of poly-ADP-ribose polymerase and by an involvement of caspase-independent pathways [5].

The present study therefore, aims to investigate the possi-ble mechanism of action of palm oil γ-tocotrienol and α-tocopherol on the human cervical carcinoma CaSki cell apoptosis.

CaSki cells were purchased from American Type Cell Col-lection (Manassas, VA, USA) and cultured in RPMI con-taining 10% fetal bovine serum, 20mM Hepes, 20mM so-dium bicarbonate, 2mM L-glutamine and 1% penicillin and streptomycin. The cells were grown in culture flask (Falcon, Becton Dickinson, NJ, USA) as monolayer to 80% to 90% of confluence in 5% CO2, at 37°C. Culture media and the above chemicals were purchased from FLOWLAB, Sydney, Australia.

Palm oil γ-tocotrienol and α-tocopherol were obtained as 80% concentrate (single peak by HPLC) from the Palm Oil Research Institute of Malaysia, Kuala Lumpur. Stock solu-tions of both compounds were dissolved in absolute alco-hol at 500μM and then diluted so that the final concentra-tion of alcohol in the culture media was <0.1%. Alpha-tocopherol acetate was purchased from Sigma Chemical Co, St. Louis, MO, USA.

The effect of γ-tocotrienol, α-tocopherol and α-tocopherol acetate in the cell proliferation was determined using a 5-Bromo-2'-deoxy-uridme (BrdU) labelling and detection method (Bohrienger Mannheim, Mannheim, Germany).

The cellular DNA fragmentation was measured using a Cellular DNA Fragmentation-ELISA method (Bohrienger Mannheim, Mannheim, Germany) and the morphological evaluation of propidium iodide-stained cells was determi-ned using a Leitz Dialux 20 EB fluorescent microscope at 630 magnification with a minimum of 4 counts involving >200 to 300 cells/field from different five locations per slide.

Activation of ICE-family proteases (caspases) initiates apoptosis in mammalian cells. Caspase-3 Colorimetric Activity Assay Kit (Chemicon International Inc. Califor-nia, USA) is based on spectophotometric detection of the chromophore p-nitroaniline (pNA) after cleavage from the labeled substrate DEVD-pNA. The free pNA can be quan-tified using a spectrophotometer or a microtiter plate reader at 405nm. Comparison of the absorbance of pNA from an apoptotic sample with an untreated control allows determination of the fold increase in caspase activity.

Paired Student's t-test was used to compare between the control and different levels of each treatment on the meas-ured parameters. Significance was set up at p<0.05.

To determine the effects of γ-tocotrienol, α-tocopherol and α-tocopherol acetate on cell proliferation, we examined the incorporation of BrdU into freshly synthesized cellular DNA.

To study the anti-proliferation mechanism induced by γ-tocotrienol and α-tocopherol on CaSki cells, we analyzed the apoptotic properties of both the compounds by mea-suring the cellular DNA fragmentation activity and mor-phological evaluation of propidium iodide-stained cells.

The cellular DNA fragmentation activity of CaSki cells induced by γ-tocotrienol and α-tocopherol was investiga-ted by measuring the BrdU-labeled DNA fragments relea-sed into the cytoplasm during apoptosis. 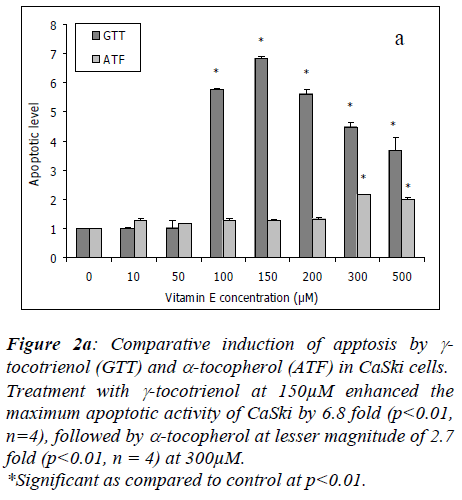 Nuclear changes of CaSki cells induced by γ-tocotrienol and α-tocopherol were confirmed using propidium iodide staining and illustrated in Figure 2b. Apoptotic data are reported as percentage of apoptosis obtained by determin-ing the numbers of apoptotic cells versus the total number of cells, within a cell population by counting >300 cells/field from five different locations per slide. 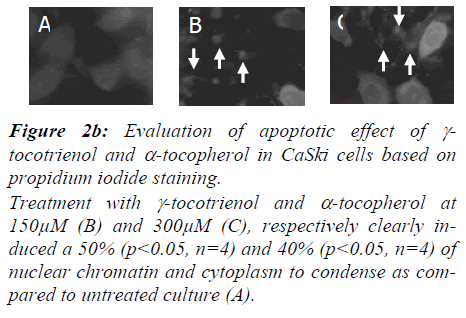 Figure 2b: Evaluation of apoptotic effect of γ-tocotrienol and α-tocopherol in CaSki cells based on propidium iodide staining.
Treatment with γ-tocotrienol and α-tocopherol at 150μM (B) and 300μM (C), respectively clearly in-duced a 50% (p<0.05, n=4) and 40% (p<0.05, n=4) of nuclear chromatin and cytoplasm to condense as com-pared to untreated culture (A)..

In order to understand the mechanism of actions of palm oil γ-tocotrienol and α-tocop herol on CaSki cells, we in-vestigated the effect of both compounds in the protein ex-pression of genes that have been implicated in the regula-tion of apoptosis.

Effect of γ-tocotrienol and α-tocopherol at maximum apoptotic activity in the protein expression of p53, Bcl-2, Bax and Caspase-3.

To determine the effect of both compounds on the Cas-pase-3 activity, CaSki cells were cultured with γ-tocotri-enol and α-tocopherol at similar concentration as above up to 24 hours treatment.

Apoptosis is an active and physiological process that can be characterized by biochemical and morphological altera-tions. A series of biochemical alterations include cellular fragmentation of nucleus and extensive degradation of chromosomal DNA into non-random fragments of 180 to 200bp by endonucleases. Characteristic of DNA laddering can be seen on agarose gel by electroporesis separation. Morphological characteristic includes shrinkage of cells, membrane blebbing, cytoplasm and chromatin condensa-tion. These changes can be evaluated via propidium iodide staining [17,18].

Our experiments demonstrated that treatment with γ-tocotrienol at 150μM enhanced the maximum DNA frag-mentation activity in CaSki cells by 6.8 fold, followed by α-tocopherol at 300μM with lesser magnitude of 2.0 fold (Figure 2a). Further evidence of apoptosis was obtained by nuclear morphological characteristics as illustrated in Figure 5c. At similar doses as used above, both γ-tocotrienol and α-tocopherol induced a 50% and 40% of nuclear chromatin and cytoplasm condensation, respectively. Pre-vious in vitro studies also reported similar findings, that is, α-, γ- and δ-tocotrienols efficiently inhibit the proliferation of human cervical carcinoma (HeLa), and breast cancer (estrogen responsive, MCF-7 and estrogen non-responsive, MDA-MB-435) cells by inducing apoptosis [3,4,6,7,19] whereas, γ-tocopherol alone or in combination with δ-tocopherol, induced apoptosis in androgen-sensitive (LNCaP) but not in the androgen-resistant (PC-3) human prostate cancer cells [5].

The growth inhibiting effects of vitamins A (retinoic acid), C and E (α-tocopheryl succinate) on cancer cells may be caused by changing the expression of specific genes, level of proteins and translocation of certain proteins from one cellular compartment to another. The alteration in the gene expressions and protein levels are directly related to prolif-eration inhibition and apoptosis [10,20,21].

The tumor suppressor protein p53, is an important regula-tor for the mitochondrion-mediated apoptotic cell death [14,15] by transcriptional activation of genes that encode for proapoptotic proteins such as Bax and by transcrip-tional repression of Bcl-2 [15,22]. The apoptosis-promoting Bax protein led to mitochondrial dysfunction and the release of cytochrome c from the mitochondria. The released cytochrome c then interacts with specific adapter, such as Apaf-1, which in turn converts pro-caspases to active Caspases [23]. Caspases then cleave several substrates including the poly(ADP-ribose) poly-merase, a nuclear enzyme involved in DNA repair and maintenance of genome integrity and post-translational ribosylation of proteins, whereby apoptosis occurs [16,2].

Our finding using Western blot analysis demonstrated that treatment with γ-tocotrienol and α-tocopherol at a maxi-mum apoptotic activity of 150μM and 300μM, respec-tively in CaSki cells, enhanced the protein expression of p53 (53kD) (Figure 3a) and Bax (21kD) (Figure 3b) be-ginning at 3 hours and 6 hours, respectively and continuing through 24 hours after its initiation. At similar concentra-tions, both compounds induced the activation of procas-pase-3 (32kD) in CaSki cells by the formation of active subunit fragments (17 kD) beginning at 1 hour and con-tinuing through 24 hours after its initiation (Figure 3c).

Figure 3a: Treatment with γ-tocotrienol (A) and α-tocophe-rol (B) at maximum apoptotic activity of 150μM and 300 μM, respectively in CaSki cells, enhanced the protein ex-pression of p53 (53kD) beginning at 3 hours and continu-ing through 24 hours after initiation..

Figure 3b: Treatment with γ-tocotrienol (A) and α-tocophe-rol (B) at maximum apoptotic activity of 150μM and 300μM, respectively in CaSki cells has no effect in the pro-tein expression of Bcl-2 (26kD), however both compounds enhanced the protein expression of Bax (21kD) beginning at 6 hours and continuing through 24 hours after initia-tion..

Figure 3c: Treatment with γ-tocotrienol (A) and α-tocopherol (B) at maximum apoptotic activity of 150μM and 300μM, respectively induced the activation of pro-caspase-3 (32kD) in CaSki cells by the formation of ac-tive subunit fragments (17kD) beginning at 1 hour con-tinuing through 24 hours after initiation.

Recent evidence using ethanol extract of Chinese licorice root G. uralensis showed that cell proliferation was inhib-ited via up-regulation of p53, and apoptosis induced through overexpression of Bax in MCF-7 human breast cancer cells [16]. Here, the p53 and Bax protein expres-sions found to be increased at 24 hours and 48 hours, re-spectively after treatment with 100μg/mL licorine root extract which remained elevated up to 72 hours. No change observed in protein expression of Bcl-2 [15]. Treatment with 40μmol/L of RRR-α-tocopheryl succinate in human prostate cancer cells, PC-3 increased the activa-tion of Bcl-2 beginning at 12 hours and continuing through 24 hours after the initiation of the treatment. However, the protein expression was not increased [9]. Another study had shown that treatment of human breast cancer cells, MDA-MB-435 with 20μg/mL of vitamin E succinate re-sulted in the cleavage of Caspase-9 and presented with the appearance of a Mr 37,000 fraction of Caspase-9 appearing by 3 hours after initiation. Activation of ‘exercutioner’ Caspase-3 was detected at 12 and 24 hours after RRR-α-tocopheryl succinate treatment with the appearance of Mr 17,000/20,000 cleaved fragments. Poly-ADP-ribose poly-merase cleavage from the Mr 116,000 intact form to a Mr 84,000 cleavage product served as an additional indicator of caspase activity in MDA-MB-435 cells at 12 and 24 hours after the initiation of RRR-α-tocopheryl succinate treatment. The use of cell-permeable caspase inhibitors indicates that Caspase-9 and Caspase-3 are involved in RRR-α-tocopheryl succinate-induced apoptosis [12].

In summary, we have demonstrated that palm oil vitamin E, especially γ-tocotrienol acts as an effective anti-proliferation agent in human cervical carcinoma cells, CaSki by inducing apoptosis. The increased protein ex-pressions of p53, Bax and Caspase-3, and the activation of Caspase-3 suggest that these genes are critically involved in the γ-tocotrienol and α-tocopherol-induced apoptosis in CaSki cells.

The apoptosis inducing ability of γ-tocotrienol and α-tocopherol makes these compounds as interesting candi-dates for further characterization of their anti-tumor effects in vivo as natural chemoprevention agent in cancer treat-ment. A better understanding of the cellular and molecular events involved in the induction of apoptosis by γ-tocotrienol and α-tocopherol may provide basic rational for cancer therapies in the future.