The pain response to mydrin-P eye drops in premature neonates

Background: To evaluate the pain responses of premature neonates after the instillation of mydriatic eye drops (Mydrin-P; 0.5% tropicamide and 0.5% phenylephrine hydrochloride) for retinal examination.

Conclusion: The instillation of Mydrin-P eye drops before ROP screening may cause pain response in premature infants. The use of 0.5% tropicamide and 0.5% phenylephrine eye drops with 3 drops every 5 min can exert the most significant effect upon mydriasis at 30 min after eye drops administration.

Retinopathy of Prematurity (ROP) is a major cause of blindness in premature infants (Gestational Age (GA)<31 w and/or birth weight<1501 g. Fundus examination can significantly reduce the rate of blindness.

Many studies have shown that ocular fundus examination causes pain stimulation in premature infants [1] Pharmacological methods are needed to control the pain caused by fundus examination [2-4]. Insufficient attention has been pain to investigating whether the mydriatic operation itself would cause pain.

A study [5] in adults and adolescents confirms a significant degree of discomforts is caused by mydriatic eye drops. Cohen [2] have demonstrated that mydriatic eye drops cause clinically significant pain response in one third of infants. However, the pain response of all infants in his study was observed only after the first dose of mydriatic eye drops. Previous findings [6-8] suggest that children have a memory of the first pain. This pain may affect the next operation or treatment. Premature infants cannot verbalize the pain and may have pain thresholds that are lower than those of older children and adults.

So we tried to use the Premature Infant Pain Profile (PIPP) [9-11] scoring system to evaluate the physiologic effect of mydriatic eye drops instillation at the first and second weeks in the infants. The PIPP was chosen as it is a well-validated method for measuring procedural pain in preterm infants and integrates contextual indicators (gestational age and behavioral state), physiological indicators (heart rate and oxygen saturation) and behavioral indicators (brow bulge, eye squeeze and nasolabial furrow) in the calculation. So PIPP can provide us relatively objective understanding of the degree of pain in preterm infants.

This was a prospective, randomized and comparative study. Fifty premature infants (100 eyes) who underwent ROP screening at our hospital between December 2014 and June 2015 in Neonatal Intensive Care Unit (NICU) of Guangdong Women and Children Hospital were enrolled in this study. Infants were eligible for the study if they met birth weight (≤ 1501 g) or gestational age (≤ 32 w) criteria for ROP examination. The study was approved by the joint Institutional Review Board of the Hospital of Guangzhou Medical University. Infants were excluded from the study if they had any known neurological abnormalities, seizures, or other conditions that could alter pain response, or if they had corneal abrasions or ulcers. None of the premature infants in our study had ever been given with eye drops before the first examination.

Mydrin-P (50 mg tropicamide and 50 mg phenylephrine hydrochloride; Santen Pharmaceutical Co., Ltd., Japan) eye drops were administered as a single drop into the conjunctiva of each eye every 5 min for three times and repeatedly administered after two weeks for preparation for the next ROP examination.

The eye drops were administered by the same clinical nurse caring for the infant to ensure that every administration was skilful and gentle. The nurse was instructed to administer the eye drops gently and avoid contaminating the eye drop by touching the eyelids and eyelashes. The upper and lower eyelids were softly lifted, one drop of eye drops was administered and the spilled eye drops were wiped over (Figure 1). Two masked doctors calculated the PIPP score. 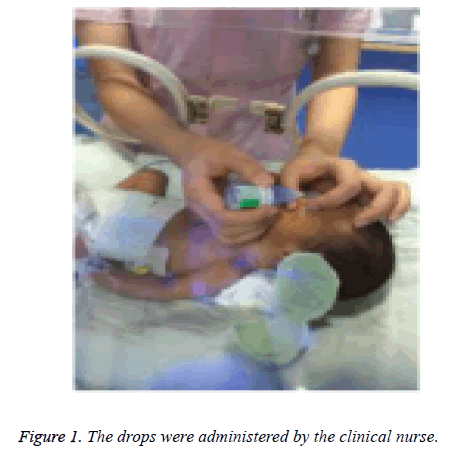 Figure 1: The drops were administered by the clinical nurse.

Using the PIPP, the pain was assessed at 30 s after the application of the Mydrin-P eye drops. The PIPP is a sevenindicator composite measure that includes GA, behavioral state, heart rate, oxygen saturation (Figure 2), brow bulge, eye squeeze and nasolabial furrow. Each indicator in the PIPP is rated on a four-point scale (0-3) for a possible total score of 0 to 21, depending on the GA of the neonates. PIPP scores<7 are indicative of no pain, PIPP scores 7 to 12 are indeterminate and >12 are indicative of significant pain. In addition, an increase in PIPP scores ≥ 4 points are considered to be a pain response. A score of 7 to 12 typically signifies pain for which clinicians might consider non-pharmacological intervention, while a score>12 suggest severe pain requiring medication. 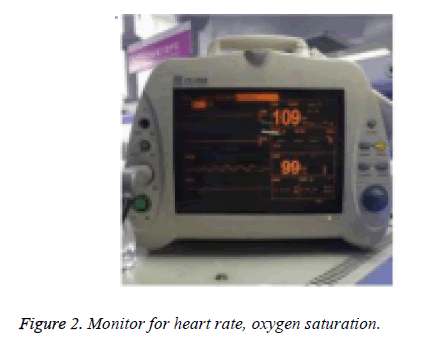 The pupil diameter was measured at 20, 30 and 40 min after the third administration of eye drops. The mean value was calculated from three repeated measurements.

No significant difference was observed in the baseline PIPP score between the first and the second dilations (P=0.49).

Table 1. PIPP score of the baseline, the first and second dilations (mean ± SD).

Table 2. Comparison of the baseline and the mean post-mydriatic PIPP scores between the first and second dilations (mean ± SD).

Table 3. Percentage of infants responded with no pain, intermediate and severe pain during the two different visits.

No significant change was noted in terms of oxygen saturation (P>0.05), whereas the heart rate, brow bulge, eye squeeze and nasolabial furrow significantly differed between the first and second examinations (all P<0.01).

1. In the present study, the mean PIPP score after the use of Mydrin-P eye drops was increased by more than 4 than the baseline value during the first and second dilations, which is indicative of pain response. These results demonstrate that the instillation of Mydrin-P eye drops (0.5% tropicamide and 0.5% phenylephrine hydrochloride) before ROP examination provokes pain stimulation in premature infants. In addition, one study [12] showed that preterm infants might be more sensitive to pain than the full-term counterparts. Pain stimulation can cause physiological, behavioral, endocrine and other reactions, which in turn can lead to short- or long-term impact on children [13]. Pain experienced [14] during the neonatal period can increase the sensitivity to pain in later years. Evidence-based medicine has also shown that early recurrent pain stimulation in the development of the nervous system can lead to a lack of behavioral and brain sensory areas of the brain [15].

Phenylephrine hydrochloride is an alpha adrenergic receptor agonist. This product is a direct-acting amine drug that acts on the receptor, but occasionally indirectly through the release of norepinephrine from the storage site. Acting on the alpha receptor (especially the skin, mucous membrane and viscera, etc.), it causes vasoconstriction, increases peripheral resistance and elevates systolic and diastolic blood pressure. Increased blood pressure can stimulate the vagus reflex and slow the heart rate. Nasal drops and eye drops also provoke the incidence of systemic reactions. Our observations show that there is no significant change in the heart rate before and after the drug administration. It can cause hypertension and headache, vomiting, palpitations, swollen head, skin tingling and cold feeling, mental symptoms, such as hallucinations and delusions of mania may also occur. After the use of mydriatic eye drops in our observation, 1/3 of the patients had white eyelid skin which also caused the discomforts.

Tropicamide is an anti-cholinergic drug, a synthetic derivative of the desired product. With low dissociation constant, good intraocular permeability and strong tissue diffusion, it may be the cause of rapid onset and short duration. Infants and children are extremely sensitive to the adverse reactions of this product. After the absorption of drugs, they can cause local flushing and dry mouth. However, Hassler [16] have found that use of 1% tropicamide causes more severe pain than 0.5% tropicamide.

2. The pain index was increased during the second dilation. Previous findings [6-8] have suggested that children have a memory of the first pain, which is likely to affect the next operation or treatment. Pate et al. [17] have demonstrated that adult reports of their pain, fear and effectiveness of coping with pain are predicted by the pain, fear and effectiveness of coping during their own childhood. With respect to children, much of what we’ve known is the recall of stressful experiences rather than recall of the pain itself. A body of evidence shows that stressful invasive procedures are recalled quite accurately over delays from 6 weeks to many years. Some children remember the pain and negative mood at the first time they experienced operation and treatment. When the pain occurs again, children can recall stressful and painful procedural details and even exaggerate negative aspects of such situations [18-20].

Because the first pain experience creates a memory of pain, pain intervention measures are recommended after mydriatic eye drop administration. Further investigation may help to predict which comfort measures, such as infant wrapping, nonnutritive sucking, sweetener treatment and even topical anesthesia, are most effective in preventing the pain response.

Systemic complications of topical phenylephrine are common to sympathomimetics and may include peripheral vascular resistance, thereby leading to an elevation of systolic and diastolic blood pressures and reflex bradycardia [23]. Tropicamide has been shown to have a lower affinity for systemic muscarinic receptors and insignificant receptor occupancy in plasma [22]. For this reason, it is suggested that the concentration of phenylephrine remain as low as possible.

Our study showed that combined administration of 0.5% phenylephrine and 0.5% tropicamide eye drops can achieve favorable pupil mydriasis, and three doses of eye drops administered every 5 min yielded the highest effect upon mydriasis. A well-dilated pupil allows for the proper examination of the peripheral retina and the diagnosis and staging of Rap. Early detection and timely management significantly reduce the risk of severe visual loss. The pupil began to dilate within 20 min, the pupil dilation peaked at 30 min and restored to reduction at 40 min. Therefore, fundus examination is recommended after 30 min. i Nevertheless, Shuke [24] proposed that 20 min post-administration as the ideal time point, in which the gestational age (range 26 to 37 w) is older than that (range 26 to 31 w) in our present study. The smaller the gestational age, the smaller the palpebral fissure. Therefore, the quantity of drugs in the conjunctival sac may be less. Moreover, the pupil size was measured merely at 20 min after eye drops use in previous study, unlike multiple time points in this investigation.

The combined administration of 0.5% tropicamide and 0.5% phenylephrine eye drops every 5 min for three times can exert the maximum effect of mydriasis to facilitate ROP examinations in premature infants. However, use of Mydrin-P eye drops causes moderate pain stimulation in preterm infants, who will have a memory of such pain. The observation time for the PIPP scale is 30 s. The operator does not observe for a longer period of time. Further clinical trials with placebo control are urgently required to observe the duration of pain and the interventions to release the pain, such as infant wrapping, non-nutritive sucking, sweetener treatment and even topical anesthesia.